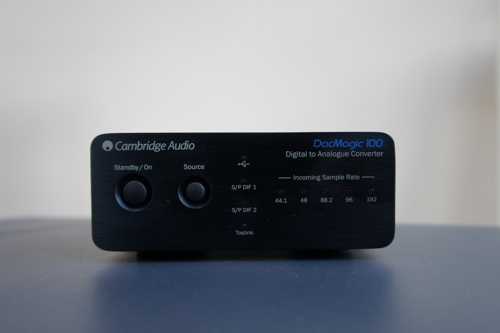 This is the second of a two part review of the current range of DACs from Cambridge Audio. The first part looked at the DacMagic Plus, a fully featured DAC retailing for around £350. This second part looks at the smaller, simpler and substantially cheaper DacMagic 100 and completes the comparisons.

The DacMagic 100 is a fairly simple USB equipped DAC. Its USB input will handle data at rates of up to 192Khz (excluding 176.4kHz) as well as having two S/P DIF inputs and one Toslink optical input. Outputs are RCA only – losing the Coaxial outputs of its larger stablemate. The USB is an asynchronous implementation which should offer a low jitter performance. It is around half the size and weight of the more sophisticated unit and is the type of DAC that is likely to be tucked away and left to perform at the back of the rack. Build quality is fine, using the same metals as the larger DAC and available in the same choice of silver or black.

USB installation worked fine the first time I used the DacMagic 100 - but after installing the USB 2.0 driver (that is common to both DACs) and using it with its big brother it no longer wanted to play ball. It proved necessary to reinstall the driver to get the 100 working again, making it impossible to carry out any A/B tests using the USB inputs. This was an issue for me as a reviewer but it shouldn’t be a problem for most users as they will only be installing one of these devices at a time. But it did mean that the direct comparisons had to be made without using the USB inputs although I saw no reason to think these would be significantly different from the other inputs.

The DAC is built on a different converter to the Plus. Interestingly it uses a more recent Wolfson chip, the 8742. This is the same chip as used in the Rega DAC although the Rega uses two of them in a parallel configuration. The Cambridge Audio uses a single DAC chip helping to keep the cost down.

Since there’s not much to talk about on the features front, I’ll just touch on the specs. These are bordering on indistinguishable from the Plus and very decent. Jitter is rated at <130ps on both units and the signal to noise ratio is 113db for the 100, actually marginally better than the 112db quoted for the Plus. Crosstalk is very low – again measuring the same as the Plus. Normally we don’t give much credence to manufacturers’ specifications as they can be somewhat selective and don’t necessarily say much about how a piece of equipment will sound. On this occasion though they do suggest that the two units will perform very similarly – which was borne out in the listening tests.

Both the 100 and the Plus feature a ground lift switch. This is normally a feature found on professional audio kit where it is used to disconnect the ground in a balanced connection. The 100, if connected via USB, will ground the signal via that connection. The ground lift offers the option of disconnecting that earth connection if it should cause a hum. 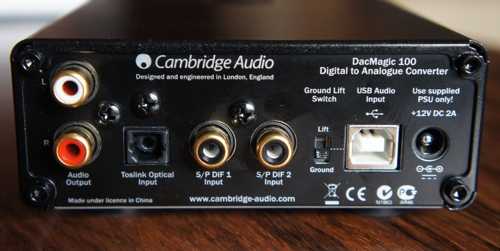 The sound was very similar to the bigger unit and not far off the reference Marantz unit. Compared to the Marantz it was slightly, very slightly, cooler in tone and maybe a little more open, allowing fractionally more air around the performers but at the expense of being more recessed. Metallic percussion, such as that in the opening track of the Dick Hyman album Age of Swing, sang out slightly better with the Cambridge DAC. The Cambridge DACs are not known for their bass performance and although it was not a weighty sounding device the was perfectly acceptable in that respect. Its notable that even though the 100 uses the same chip as the Rega DAC it does not sound similar - the Rega is known for its warmer, bassier sound.

Listening again to “The Weight” by the Band the sound struck me as smoother than it had with the Plus. It could be that this indicates a less harsh sound or there could be other differences. It seemed to be borne out by the Anna Netrebko delivery of Verdi’s La Traviata (from the Deutsche Grammophon album Sempre Libreria) where some of the crescendos seemed harder on the Plus, although it could be that a slightly higher output level was driving something further into the system a fraction harder resulting in some inconsistency in teh presentation. With components as close in performance as these it is not really possible to ascribe differences accurately to a single part of the signal chain.

I did give both of the Cambridge DACs a listen in my second system where they gave a creditable performance with the Lym Audio 1.0 Tripath based amp. I didn’t find the combination quite as convincing as the nuforce DDA100 integrated DAC and amplifier which has qualities closer to the next price band above. It is impossible to tell though whether the relative disadvantage of the Cambridge/Lym combination was due to the amp, the DAC or - most likely - simply the system matching.

The DacMagic 100 is an excellent little DAC that at the very least holds its own, sound-wise, with the DacMagic Plus which is nearly double the price. It has as many “ins and outs” as most people will want and covers the same ground in terms of high definition capability. The more expensive Plus boasts a more sophisticated implementation and upsampling but, for me at least, that didn’t translate into a better sound. If you have the previous generation DacMagic it’s unlikely that either of these DACs would be much of an upgrade – you’d do better to save your money until you can step up to the next price level. Both the Cambridge DACs are worth an audition though if you‘re in the market for a budget DAC. Either DAC will probably bear out their manufacturer’s claim of improving virtually any (budget) digital source. Personally I favoured the smaller DAC for its much lower price and at least comparable sound.