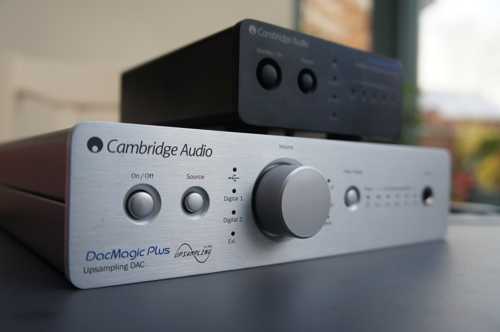 This week I'm starting a review that's in two parts. It is about two digital to analogue converters from Cambridge Audio – the DacMagic Plus and the DacMagic 100. These DACs were released last year as the latest in a long line of DACs from Cambridge Audio. I reviewed the previous generation converter last year, concluding that it was a decent performer, so the big question is whether the new models represent much of an improvement and, if so, how they compare to one another and the competition.

The two models were released within weeks of each other. The DacMagic Plus is a more sophisticated device, with volume controls and an integrated headphone amplifier. The DacMagic 100 is a smaller, simpler and significantly cheaper converter. We'll look at the Plus in this first part then take a listen to the DacMagic 100 in Part 2.

The DacMagic Plus is an economical (in audiophile terms) digital to analogue converter. It's aimed squarely at the computer audiophile but could also be used to convert the data stream from a CD player or other source. It has two S/P-DIF inputs, each with a choice of coaxial or optical inputs and a separate USB input. These inputs operate up to 192kHz, with the exception that 176.4kHz is not accepted by the USB input. For PC use, with a generic Windows driver, it will handle data rates up 96Khz. Using its own driver it will handle data rates up to 192Khz over USB. The USB implementation is asynchronous, so the DAC controls the speed and order of the data packets reaching it. This should reduce the timing errors that cause jitter, a peculiarly digital type of distortion.

The unit is half width, half height – very similar casework to the last model. Build quality is standard for Cambridge Audio, as is the choice of silver or black. It's certainly not audio “bling” but it looks OK in the rack and it feels sturdy. The casing is all metal and the sockets are good quality.

Ins and outs are well catered for. As well as the conventional inputs described already, the unit is designed for use with an optional Bluetooth connector for streaming from compatible devices. Outputs are via normal phono sockets or balanced XLR connectors for those with compatible preamplifiers.

The unit features a volume control so it can be used directly with powered loudspeakers. This can be bypassed for use with a regular preamp or integrated amplifier. The control is “fly by wire”, controlling the digital signal rather than being directly connected to an analogue resistor or attenuator. This has, at least hypothetical, sonic advantages although it does give the control a slightly disconnected feel. The volume control would be more useful if it could be operated remotely but it is not equipped for this, suggesting that it is a facility targeted at desktop users. This is a shame, because the number of inputs allow it to be used as a digital preamplifer, but the lack of remote control restrict how useful most people will find this added capability in a regular sitting/listening room

Under the hood is a pair of Wolfson WM8740 24bit DACs, the same chip and configuration used in the previous generation DacMagic. Cambridge Audio clearly think highly of these chips as they also form the basis of the processing in their flagship 1200GBP, 851CD player (although that unit uses four chips and different electronics). The biggest technical difference to the older DacMagic is in the upsampling which is 24bit/384Khz compared to the previous algorithm of 24bit/192Khz. The unit offers the same selectable filters as the previous model so I won't cover that again here.

Installation of the Plus wasn't straightforward for me. My XP machine didn't recognise it as a regular USB audio device so I downloaded the USB2.0 driver. The download was easy enough but the set-up file wouldn't run. On delving deeper, there was another setup file in the download folder. That didn't run at first but when I tried again, this time with the DAC connected, it installed without further problems. This is the reverse of the usual procedure where installing with a device connected usually causes problems. It should have come as no surprise that software installation was an issue - I'm convinced software drivers are pieces of computer code developed by demons who hate hi-fi reviewers.

I'll just cover this quickly as I've made a few changes over the last year. The main system comprises a Marantz SA-KI Lite SACD Player/DAC, Musical Fidelity A3.5 integrated amp (used as a preamp and to power the tweeters), a custom built 150W Greg Ball “Simple Killer Amp” driving the main drivers of a pair of Usher Be-718 standmount loudspeakers. The lower end is boosted by an Anthony Gallo subwoofer and the frequency balance managed by a Behringer Ultracurve equaliser. My second system is a pair of Acoustic Energy AE509 compact floorstanders driven by whatever I have to hand – currently the nuforce DDA-100 integrated DAC/amplifier that I still have from having reviewed recently, with a Windows 7 PC as digital transport.

The sound was very similar to the previous DacMagic, as you'd expect. Clear, slightly lacking in bass weight and detail compared to the best, occasionally sounding a little harsh but giving an open and honest account of the music. I suspect the impression of harshness arises where the DAC's tonal characteristics emphasise specific frequencies that are less than perfectly captured on the recording. So a recording of “The Weight” by The Band even sounded a little harsh using the reference DAC – which is quite smooth in character normally – but even more so with the Cambridge Audio. The Ushers will also tend to exaggerate this characteristic so whilst I wouldn't say the DAC sounds harsh you might think twice before selecting it for a system that leans in that direction.

The headphone socket gave a decent account of the sound of the DAC. Clear and open, nothing added or taken away. It sounded a little better through my Musical Fidelity headphone amp, but that adds a pinch of Class A valve sound to the mix that helps it along a little. It's not the last word in headphone amps but would be fine on a desktop or for occasional use in a main system without dedicated headphone facilities.

Overall there was little to choose in comparison to the DAC in my Marantz . Both offer a good, wide and deep soundstage. So taking a couple of my standard test albums, on Anna Netrebko's arias there was a good sense of the acoustic space. The Marantz was slightly smoother with her voice, the DacMagic Plus slightly more dynamic. Both have the slight glare you get from oversampling DACs but sound more lively and present that non oversampling types. With "Chuck E's in Love" by Rickie Lee Jones, the Cambridge DAC separated the instruments nicely and presented the rhythm coherently. My fingers snapped away happily! In the bass range, I would take a Wyred4Sound DAC over either of them, but the W4S micro DAC, which would be the price level competitor, has far less facilities and connectivity options.

The DacMagic Plus is a very good converter and if you want the facilities it offers it is reasonable value for money. If you already have the previous model I'd certainly suggest an audition before upgrading. Personally I wouldn't consider that the very slight improvement in sound would warrant making the change although the volume control could be a factor if it's being used in a desktop system. Nevertheless, the DAC remains a clear recommendation for its open and fairly dynamic sound. You'll have to wait for Part 2 to see how it stacks up against its younger sibling, the DacMagic 100. Till next time...