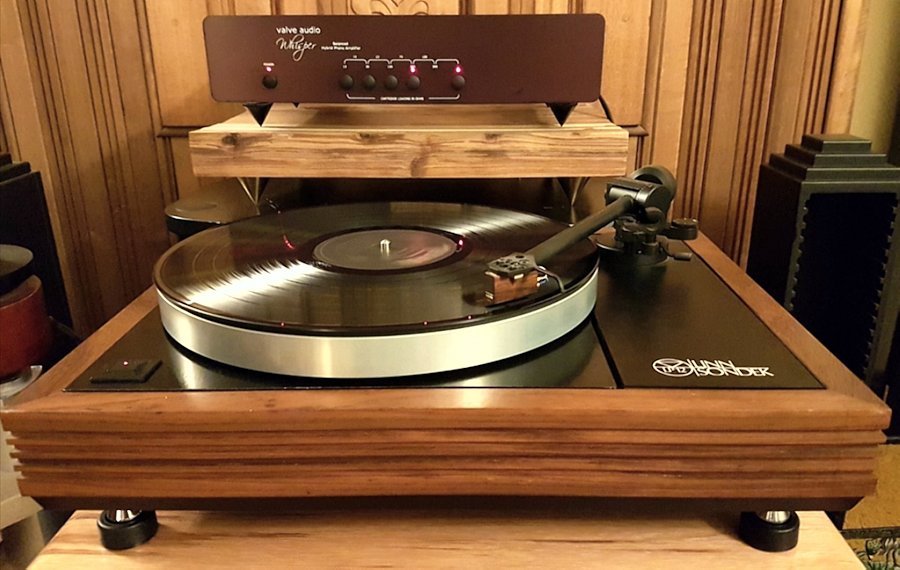 A Tale of Two Linns

My Linn Valhalla was the direct cause for me building my own turntable. I bought the unit second hand in as near as mint condition as I've seen, during a visit to UK in 2001 on the advice from a Linn owner there. To get it back home to South Africa we had to construct a sturdy crate to hold it in a disassembled state along with loads of books - who in their right mind buys turntables and books on an overseas holiday? - and shipped it back home via sea. Took the best part of three months to get here too. We left on the evening of September 11th 2001, the last flight out of Heathrow before it was shut down after the American attacks. Please take note that the following are my impressions of my purchase after it had been re-assembled and “tuned” by an expert who confirmed that the turntable was in good condition and representative of the breed.

From the first time I switched it on, my disillusion with the thing began to grow. Flimsy of build and if there had been Quality Control somewhere in it's past they skipped over the rudimentary box (I can't use the word plinth here). I had replaced the tone arm which was fitted - I have no idea which one it was and replaced it with a Rega 330 with Silver wire which made it sound a bit better but the LP12 never satisfied. Cartridges used were a Spectral Signature MC followed by a Blue Angel Mantis, also MC plus a few lesser MM's. From my perspective this was a shoddy bit of kit, flimsy of construction and built with a suspension that had it been in a motorcar would have resulted in recall after recall. The motor was weak and usually needed help to get the platter turning. Plus the motor cogged badly. Tinkering with a turntable to keep it working is not one of my favorite pass times!

Over the years Linn has brought out many upgrades which addressed some of the faults. This review is based on a local, South African product that fixes those irritations that the dedicated Linnie has to endure apart from the motor, which I suspect Meccano would have rejected. Linn supplies an upgrade for the motor and in due course so will others no doubt. The company who has designed the upgrade in this review is Dewaudio, a South African company and this review centers on modifications to the top plate, sub plate and “plinth” base board.

STANDARD versus THE UPGRADE

Common to both machines in these tests:

One of the features of this upgrade is that all the parts are CNC machined and/or cut. 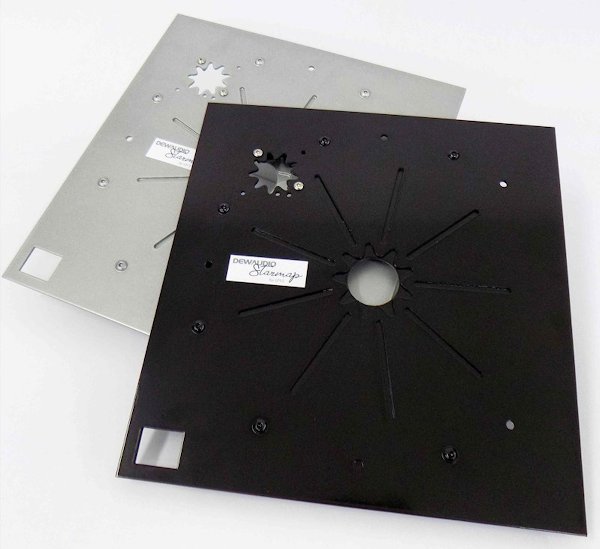 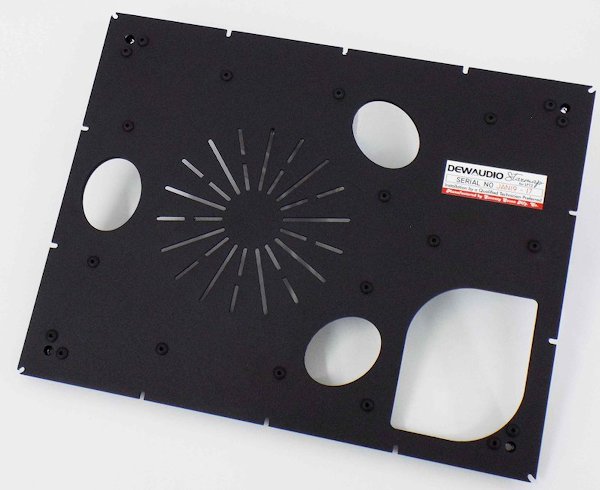 Starmap plates and Base Plate 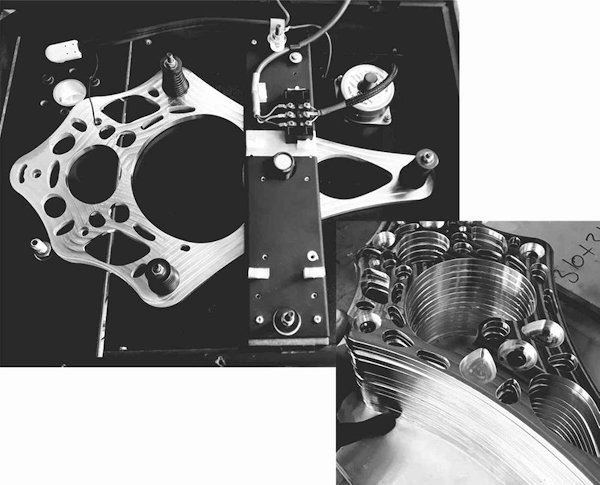 The Startrail sub-plate is CNC machined from high grade Aluminium. The holes and depressions, filled with a special polymer, are designed to reduce resonances. 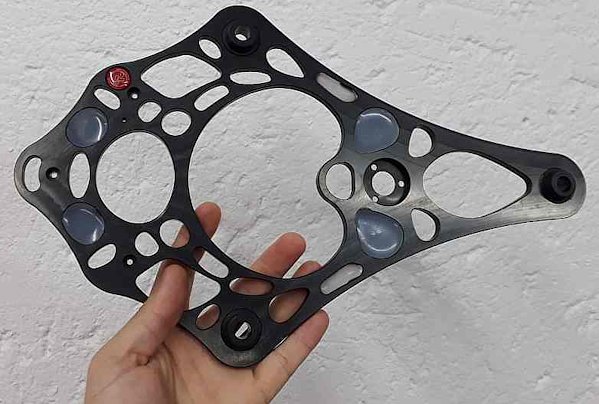 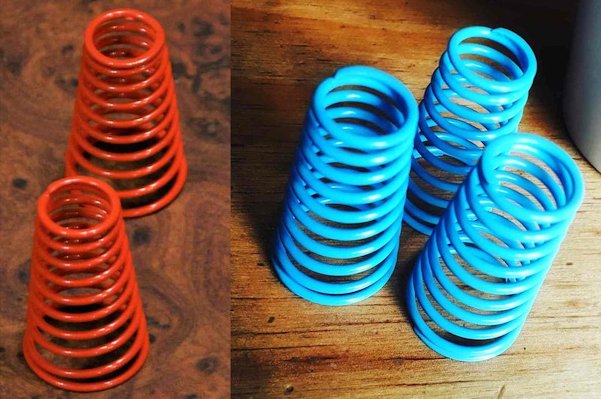 Tracks from a variety of LP's were selected and listened to first on the standard LP12 and then on the Starmap version. At all times care was taken to replicate the process from changing the armboard/tone arm/cartridge from one turntable to the other, using the same audio interconnects, even down to the actual position of the turntables. The amplifier gain was not changed either as it was very apparant that there was a fair bit of vibrational interference between speakers and turntables and that colours the sound on the standard Linn. Put anothr way, the standard Linn vibrates easily. One “test” I always do on turntables is to rest the stylus on the LP with the platter stationery and tap the mount, plinth and chassis to get an idea of how much microphonics plays in the sound presentation. The saying “Comparisons are odious” takes centre stage here - the standard LP12 is very, very bad whilst the Starmap LP12 revealed only a trace of “tap transmission”. Not very scientific this “test” but very revealing and only a little worse than my EMT 948 sitting on granite.

I also decided to record the playback on tape via a Studer A80 as a further reference. This recording replicates the differences heard in the actual playing of the different LP tracks.

The Rossini. The recording is one of the better ones out there and the differences between the standard Linn and the Starmap version were very, very noticable. The violin section went from a composite with sheen to the point where I could hear different violins almost as if I were at a concert. Live it manifests as a group but concentrating on the violin section the instrumenst separate and this is very close to what the Startrail manages. The Linn's bass was bloated and a touch boomy, the Startrail extracts more definition and the bloat is gone. Cello's and Double Basses are not very loud live and have a wonderful strininginess which came through on the modified turntable. Another area that was notably crisper are the sections where the Second Violins tap the back of their bows on the music stands.

The Planets. Not a particulary good recording and flat sounding with grainy treble. The trumpets sounded harsh, the harp very unrealistic and the drums indistinct. Via the Startrail everything cleaned up and the organ, which was embedded in the mush via the standard Linn was at least disecernable on the Starmap. The organ is used to support the orchestra in this piece and ideally should not dominate but it should be able to be heard.

Loussier Trio. Lousier's recordings are usually good and this one is no exception however the standard Linn gave a very over the top boom of the string bass, the piano a bit indistinct and bland. Good cymbal transients with a hint of metalic sound but again indistinct. Via the Startrail the double bass was much tighter, the cymbals sounded appropritately metalic and transients were vastly improved.

Tchaikovsky. As per the Linn the sound was hollow with poor instrument separation. It was very difficult to discern the difference in sound between a clarinet and an oboe and trumpet lacked resoloution. The Startrail brough things back to what I consider closer to actual sound with much greater rendition. As illustration I could hear irregularities in the decay of the trumpet which live is normal, in a recording, exceptional. Instrument separation was immesurably better.

Chris Rea. Not much to say here other than the overly long introduction was good enough to separate accents of the various mumblings and the whole crisper on the Startrail.

These tests re-affirmed my long held belief that the standard LP 12 is very coloured and a grat deal of that problem is that it acts like a microphone and that interferes with the way it plays back. I have seen and heard one that was mounted on a very heavy steel bracket bolted to a slate wall almost a meter thick to try and kill some of the pick up from the loudspeakers in the system. The owner of that one, in the end, relocated the turntable and amplifiers to another room.

From the above it should be noticable that I liked the Startrail much more than the Linn LP12 Valhalla. The listening session was almost an anticlimax after my “tap test” which indicated where the muddiness, lack of timbre and colouration would be and as expected the Startrail, having removed those issues, sounded far, far better. Listening to the unmoddified Linn brought back the reasons for my dislike of the one I owned which I ended up swapping for a few second hand LP's. A local retailer literally “flipped” when he installed the Starmap modifications and promptly ordered a dozen kits for resale. The Starmap LP12 kit brought the turntable into the company of elite and much higher value units and along with the reduction in colouration, a sense of “that's how it should be” permeated this test.

Apart from the website link at the top of the page see: