An audiophile all-in-one with tubes! 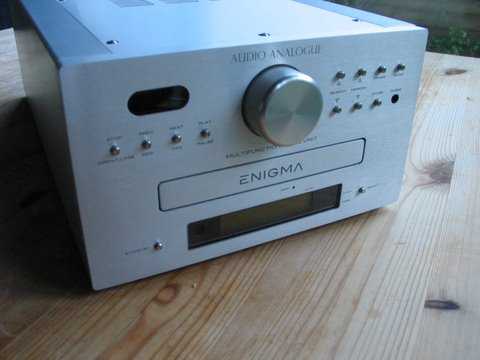 Audiophile all-in-one systems are popular at the moment. It all started with the Linn Klassik, but really took off with the Arcam Solo (see review), which I reviewed some time ago and found to be excellent. Of course, the origins of the all-in-one box go further back than the Klassik. Who cannot remember the famous receiver, which combined a tuner and an amplifier? Actually, the very first 'wireless' sets even included the speaker, so all-in-one is as old as audio, I guess. Times have changed a bit, and not only does the modern version contain a CD player, but nowadays much more functionality can potentially be added. The Solo is a good example with its many features and even the option to interface with an iPod.

The latest offering is the Audio Analogue Enigma. It combines a CD player and analogue tuner with a 54 watts amplifier. Its selling point is the inclusion of a single ECC88 valve in the preamplifier section. Power amplification is taken care of by a pair of LM3886 modules. The shape of the Enigma is unusual: half width, slightly higher than average and quite deep, it is approximately the size of a shoebox. That makes it more compact than most of the competition and more like a midi system in this respect. 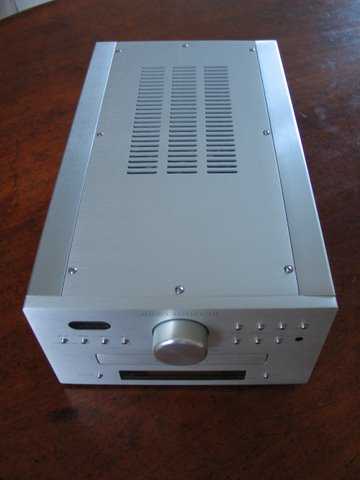 When I unpacked it I had a little 'Ikea moment' as the content of the box includes an Allen key. It turns out this is not to assemble it, but to remove the top, probably to access the valve. Valves need replacing from time to time, although this one isn't used to produce power, so should have a relatively long life. It will also enable you to change the valve for another one, a tweaking practice that is common with valve electronics, although I doubt if many Enigma owners will try this. Given this, I was a little surprised to find that the manual tells the user not to open the unit! I considered the Allen key an obvious invitation and did open the top of the case, only to find out that I couldn't remove the valve at all! It is mounted sideways and can only be removed if the side panel is taken off too. But that is attached with a different size Allen key! Why the Allen key is included is a bit of a mystery to me.

Build quality is excellent, and the unit feels quite heavy due to a large toroidal transformer in the back. The front is a substantial slab of aluminium and the rest of the case is made out of very nicely brushed aluminium. The only disappointment is the really flimsy CD tray, which is explained by the fact that Audio Analogue uses a CD-rom transport. And I do have to say that the speaker terminals are on the small side. 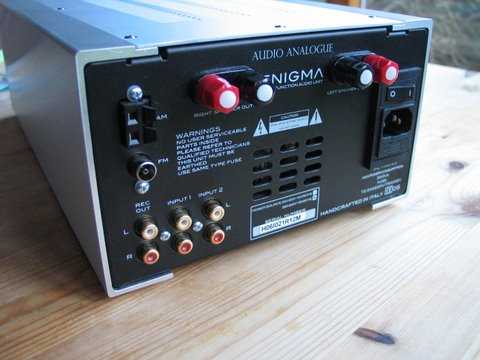 Installation is very simple: just connect two speakers and an aerial, plug in the mains lead and you're done. The unit is switched on at the back and first enters standby. Pressing the little button at the front to completely wake up the Enigma starts a 30 second warm-up procedure to gently bring the valve to operating temperature. This will ensure a long valve life. For that reason it is recommended to put the unit back in standby when not in use, although this has the disadvantage that one has to wait for 30 seconds before each use.

In my system the unit produced an audible hum, even in standby, although it sat on a substantial slate base which sat on sorbothane feet. In most circumstances this level of hum will be no problem at all, but if the Enigma will be close to your listening spot, you might want to check this out. It certainly is noisier than any component I've had before. When tried in a friend's system it was quieter, by the way, but still produced some hum.

Another thing that one should know about this little system is that the ergonomics of it aren't as sophisticated as those of the Arcam Solo. For a start, this really is just a CD player, an analogue tuner and an amplifier that happen to inhabit the same box. There's no real integration or added cleverness. As far as I'm concerned that is just fine. There are a few things I liked less. When you insert a CD and then press 'Play' nothing happens. You first have to press 'Open/Close' for the player to close and read the disk. Only after that will it respond to the 'Play' button. The process takes about 4 seconds, during which you just have to wait. Pressing 'Play' any sooner has no effect at all. Another, minor point is the fact that the CD player is completely unresponsive when the unit happens to be switched to tuner or another input. The first time that you press 'Open/Close' and nothing happens it takes a while to find out why.

Of course, if the Arcam Solo is switched to the tape input and you put a CD in it and press 'Play' it will not only close the tray and then start playing, it will even switch the amp to CD! That is a different class of ergonomics and the Enigma looses a few points to the Solo for that, as far as I'm concerned.

A last niggle is the volume knob. This is one of those electronic ones that only has three positions: turn it to the left and the volume starts going down and turn it to the right and it starts going up. Problem is that it is really difficult to make it go up a single step. You find yourself 'overshooting' all the time. After a while you learn how to give it just the right flick for a single step, but I never managed to reach perfection. The remote works better for the volume, but is very uninspired otherwise. Neither the Enigma itself, nor the remote are very easy on the older eye, as the only indication of the function of a button is in tiny text. Icons are a bit easier, I find. 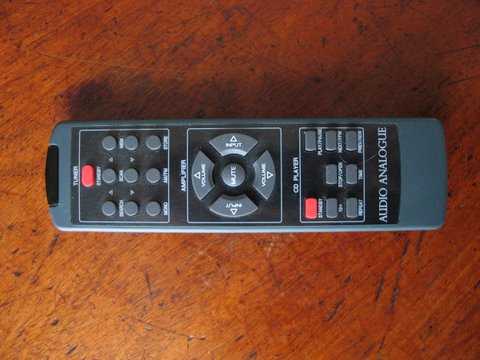 After a while one gets used to these things, of course, although the waiting before one is allowed to press 'Play' remained a little bit annoying, I have to admit.

But all of that is of no importance, obviously, as you and I are only interested in the way it sounds, aren't we? Well, first impressions were good. Music certainly has that extra richness and fluidity that you would expect from a valve amp. Everything sounds rather pleasant and there are no really obvious shortcomings. Soundstage, level of detail, tonal balance, rhythmic abilities, they all seem adequate.

But after a few days I started to hear some limitations too. For a start, there's much less bass control than I'm used to. My speakers are the Dynaudio Contour 1.8 mk2 floorstanders, and these are 4 ohm and quite low efficiency, making for a slightly more difficult load than average. The Enigma clearly had trouble driving them, with some woolliness and a lack of resolution in the lower frequencies as a result. This means it isn't very authoritive in the bass and as a consequence the whole picture lacks a bit of scale and physical presence. But at lower volumes and with well recorded music by smaller groups, the sound could be called comfortable. It copes less well with larger scale music, or things that rely on a bit of impact. At lower volumes the Enigma is just too soft sounding, and when you turn up the volume the treble gets a tad harsh. Perhaps it is just the soft midrange that makes the top end seem harsh in comparison, I'm not really sure. These things are relative, after all. Whatever the reason, the impression is there, and the combination of top end and midrange certainly isn't very coherent.

There is one thing, however, that the Enigma does very well, and that's human voice. Give it some well recorded singing and it will join in and start to sing itself. Of course, human voice lacks deep bass and high treble, so will not show up the Enigma's shortcomings. This will allow it to show its stronger points, mainly a nice tonal richness to the midrange and a soft and friendly presentation. The only exception is when playing very sibilant vocal recordings, with which it copes less well.

As my speakers could be (partly) responsible for these problems, I took it to a friend, who has a pair of excellent Focal-JMlab Chorus 714s floorstanders. At about £400 a pair, these are a more realistic choice for the £850 Enigma than my £1800 Dynaudios. Another reason for this comparison is that I also tried the Arcam Solo in my friend's system. The Solo worked very well there, even (just about) beating his Arcam 8se CD player and NVA pre-power combination. Impressive indeed! No such thing happened with the Enigma however. Again, bass was a bit woolly, mids were a bit soft and the top had the tendency to harden up at higher volumes. There was the nice richness and the added fluidity to the midrange but I feel that this didn't compensate for the problems at the frequency extremes. My friend used the Enigma for a couple of days, but found his own system did sound better when he returned to it. I agreed.

Perhaps the Enigma could work well with some high efficiency speakers that will bring out the nice midrange, while not exposing too much of the treble. But if you happen to own more difficult, lower efficiency speakers, that have more extension in the bass and treble, you might want to consider some of the competition, either all-in-one or separates. 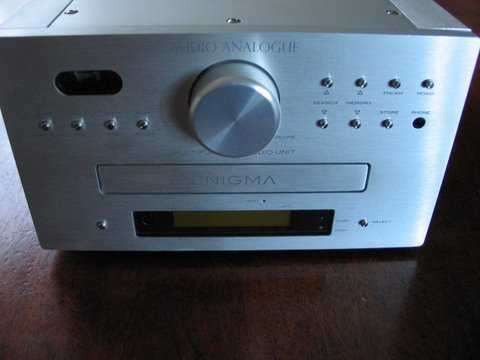 I have to admit that I am not very enthusiastic about this unit. It does have some qualities, being compact and very well build, having a nice, rich midrange, and working very well with human voice. But I didn't like the very basic ergonomics, the poor driving ability and the slight harshness in the higher frequencies when playing louder. It made for an uneven presentation that just didn't sound 'right' to me. But I am a transistor guy, and like precision and drive in a system.

There's a lot of competition in this price range and there are many alternatives available, both integrated as well as separates. Perhaps the Enigma does represent the most affordable and simple way into 'valve sound', and I do think that Audio Analogue deserve some credit for trying to create something that is different. As always, the best way is to have a listen yourself.

I accept all of your comments, but I answer with a question: can you find on the market a similar product with the same size, same sound quality, same design, same build quality, same raw materials quality and same price? The answer is NO... So any comparison with any other all-in-one product does not really make sense. For sure it is not a perfect product, because there are some things that can always be improved exactly like in any other model from other manufacturers.

When we thought about Enigma, we did not really want to fight against the same competitors we have for other models in our range, but we wanted to create something unique that could be of interest not only to the Audiophile market.

We will use all of your comments and suggestions to improve future versions and I thank you for anything you said, positive or negative, it is always very welcome.

Last but not least: all of our dealers and customers, when making a comparison with Arcam Solo, found the sound of Enigma better, but these are just personal opinions...