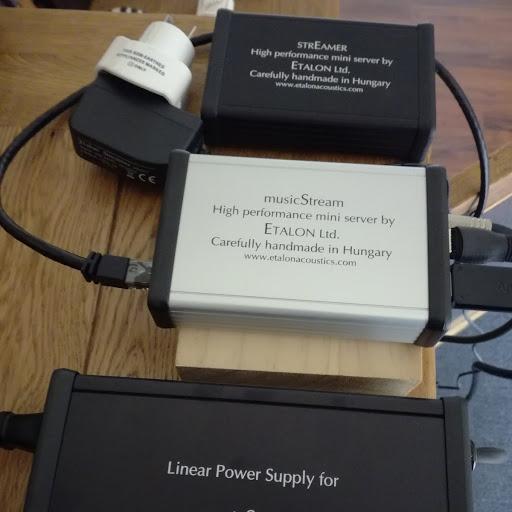 Welcome to my journey through the land of RaspberryPi file playback and online streaming, and beyond. My exploration of some very attractive alternatives to PC-based music file players runs over three parts. In Part One, I begin my investigations by looking at and listening with several devices.

Part Two continues the travels with more devices, and in Part Three I consider software options and some enhancement accessories that came to my attention whilst looking at the burgeoning field of RPi-based audio over Ethernet.

I've been using a very effective music file player for a while (I've previously reviewed the Collybia Mamboberry), and this piqued my interest in this rapidly developing branch of technology for the audiophile. So I've been dabbling with high-quality low-cost USB, S/PDIF, and Ethernet digital audio centred on using the RaspberryPi (RPi) platform, and this is a roundup. As my research progressed I found some other very interesting options, particularly as disc-based playback is now widely considered to be soon defunct. Indeed, encouraged by my findings, I have now ripped my large CD collection to FLAC and WAV files. I've gone from many silver discs to a few hard drives.

Most audiophiles are not millionaires, so equipment options for which a significant budget is not needed would seem most interesting. Forget “how big?” and “how much?”, we are moving rapidly into a world of “how small?” and “how cheap?” And definitely, “that good?”

It seems like there's an endless range of single board computers (SBC), software, and accessories, including on-board (I2S bus interface, with separate clock and serial data signals) DACs, being offered for various ways of playing music. Over the last few months I've rounded up a few interesting units that can be set up to play files from an external hard drive or USN stick, without a PC in most cases. There are far too many function, configuration, and vendor options for me to even attempt to be comprehensive, and some sellers don't supply samples for review. So, here's my very partial convenience selection of what I currently know about. No doubt, I'll be updating this in the future.

This project has taken far longer than I anticipated (June 2017 to February 2018). This is not due to complexity, but really because more work than expected has been necessary. I've had to create a simple presentation of the complicated, very extensive and ever-expanding field of audio-over-Ethernet. Despite covering much ground, I haven't been able to cover all options, although the range of products I've auditioned is wide and, in places, fairly deep. Auditioning over an extended period has been worthwhile as I've been able to avoid observing only surface impressions in the ‘rush' of novelty, instead acclimatising to each unit and being able to swap among them, as well as be sure of reliable operation. This has provided more settled observations, and I've been able to notice more, reconfirm impressions repeatedly, and experience the products in repeated use. 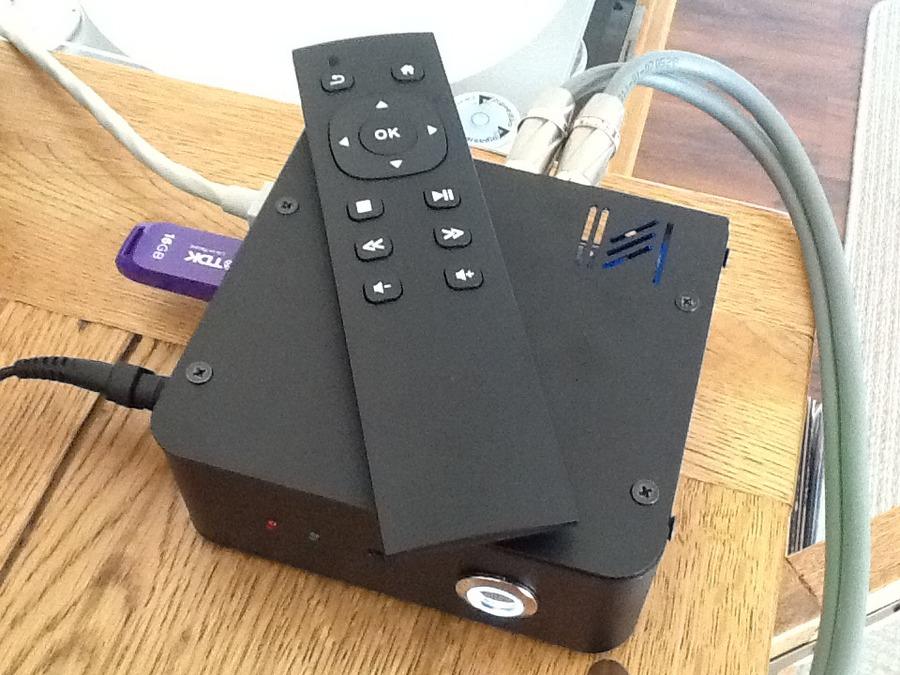 We've all heard that “ignorance is bliss”. My alternative experience is that ignorance is expensive! When I bought my US$600 desktop PC for dedicated use as a music player and library manager, I didn't know much about single board computers and associated audiophile accessories. If I knew then what I know now, that PC would still be on the dealer's shelf, and I would have several hundred dollars in my pocket!

Much of a PC is not necessary for audio, and indeed some of it gets in the way of sound quality. Cooling fans and other components create electrical and radio frequency noise pollution, and the USB connections are notoriously noisy as they also carry a 5V power supply for external peripherals. Personal computers and their USB interfaces are designed to support many functions and are not optimised for audio; they're electrically noisy with EMI, which affects the quality of the audio signal, introducing distortion in the form of both electrical noise and digital jitter. You can treat the audio signal through the USB connection to ‘clean' it, or you can avoid the USB connection in several ways.

Can a $135 media player be a viable and easy-to-use alternative to an $600 PC or even $£3000+ media player and DAC? I've been talking to a few audiophiles who believe so. Sound quality and versatility at low cost! Oh, yes, indeed. Inexpensive, ultra-compact hardware, running free software, designed for dedicated audiophile music listening. This had to be investigated much further, especially in light of my very positive early experiences with the Collybia Mamboberry and the HiFiBerry, both of which are now full-time parts of my reference system.

USB-connected computers and peripheral units of various types are becoming the main sources and very familiar fare for the hi-fi enthusiast. Somewhat less mainstream, I've found that a media player connected to my music library via wired Ethernet will play my files instantly without glitches, and the sound quality is superb. Moreover, the software is almost all free of charge, feature-rich, and easy to use. Is this too good to be true? To find out, I asked several vendors to supply plug-n-play review samples that they felt best represent their approach to high quality sound at low cost.

Instead of running a media player on a big PC, a single board computer (SBC) is now a very cheap and effective option. Here I investigate the RaspberryPi (RPi 2 typically about $30, RPi 3 about $45), and there are a growing number of others (including Banana Pi, Orange Pi Zero, Odroid XU4, Expressobin). I initially focused on SBC and internal DAC in place of a PC and external DAC, and some other options were suggested to me along the way.

My current external USB DAC cost $485 (Styleaudio Carat-Peridot). What I've discovered is that it's not necessary to spend so much to get easy-to-use high-quality playback of music files. Playing high quality audio over an Ethernet LAN is now easy and cheap. Ethernet audio is a viable option in terms of sound quality, cost, and ease of use.

All review samples were requested as “plug-n-play”. I've considered sound quality, ease of setup, ease of use, standout features, and shortfalls, as I've used each of these products. I included each as a contender for ‘high-performance, low-cost', and discovered some interesting variants. Prices are currently as given on the vendor websites at the end of January 2018. Whilst I focus on my playing of music files stored on external hard drives, the following units are also suitable for online streaming and Internet radio.

The headline for this survey is that all units I tried exceeded my expectations for sound quality, ease of setup, and ease of use - some spectacularly. As sound quality was not glaringly different but more subtleties in instrument timbre and space in the soundstage image rendered, it became evident to me that my comparison was on the experience of using the units, and only a few minor niggles can be reported. I know that the music image rendered in each case is right because, whichever unit I select, I quickly got lost in the music experience. Whereas I had begun my journey wondering if these low-cost products really could deliver a magnificent musical experience from audio files, I have concluded my quest both reassured and mightily impressed.

Set-up of the operating system and player software was very simple, taking only a couple of minutes in each case. This consisted of viewing the system in a web browser, and changing some software settings and restarting the player.

I've been able to audition several options from a few of the growing number of vendors offering RPi-based music players and similar: files accessed from a USB hard drive directly attached, or connected to the LAN, with digital output to an onboard DAC HAT or to an external DAC via USB or S/PDIF (coaxial)connection.

Hi-fi performance from a low-cost DAC chip, to exploit the “no frills” super-cheap PC format of the RPi. “What's the best that can be done with off-the-shelf components?”

Refined and extended capability, with special attention to noise and other digital signal defect reduction. “How can we take file-based audio to another level and retain the low-cost ethos?”

Audiophile design values, beyond the constraints of the RPi. “What's the best we can do with digital audio file playback?”

The vendors are listed in alphabetical order.

For me this is where it gets very interesting. Why rely on the sub-optimal USB output? What are the other options? I corresponded lots with the sales support guys at Allo, and we discussed four products - RPi + Boss DAC, Kali + Piano 2.1, USBridge + Sparky SBC, and a DigiOne + Sparky running DietPi. They were particularly keen for me to try out the DigiOne transport and the Boss DAC, and I also auditioned the USBridge transport for reasons that will be pointed out.

Allo designs emphasise properly addressing jitter and noise, and essentially their range reflects three approaches: internal DAC; external DAC; and don't use a PC for playback by network streaming, instead connect an external HDD to the RPi, or even put the music files on the SD card (this is very limited storage for large lossless files, though). Their designers stress that USB has better jitter suppression than S/PDIF, but it is noisier.

Their DACs can be used with an RPi or with their own more powerful Sparky SBC ($35). The Boss DAC ($65) is the flagship performer in the Allo range, having been designed to resolve the issue with the RPi around jitter (it's a simple PC). Allo claim theirs is the best implementation of the Texas Instruments PCM5122 DAC chip (384 kHz/32-bit).

The DigiOne transporter ($99) plays music files through an external DAC, and is not a reclocker. It's designed to get the best S/PDIF signal out of the I2S output of the RaspberryPi. The sample was offered with DietPi software, although it was supplied with Volumio2, and only needed the I2S connection to the DigiOne board switched on to get music playing. Apparently, only US and UK power supply pin options were available. The sample arrived without documentation. The case is easy to assemble plastic panels with posts.

You don't need to be super-observant to recognise that the RPi has USB output capability. But the noise limitations for audiophile use are well known. So, the Allo USBridge ($180) design does clever things to reduce noise to an (literally) unheard of level below that created by a battery, and way less than a PC (~100uV). It can be used as a file transport in place of a PC, with USB output to external DAC, and DietPi configured with a music player. 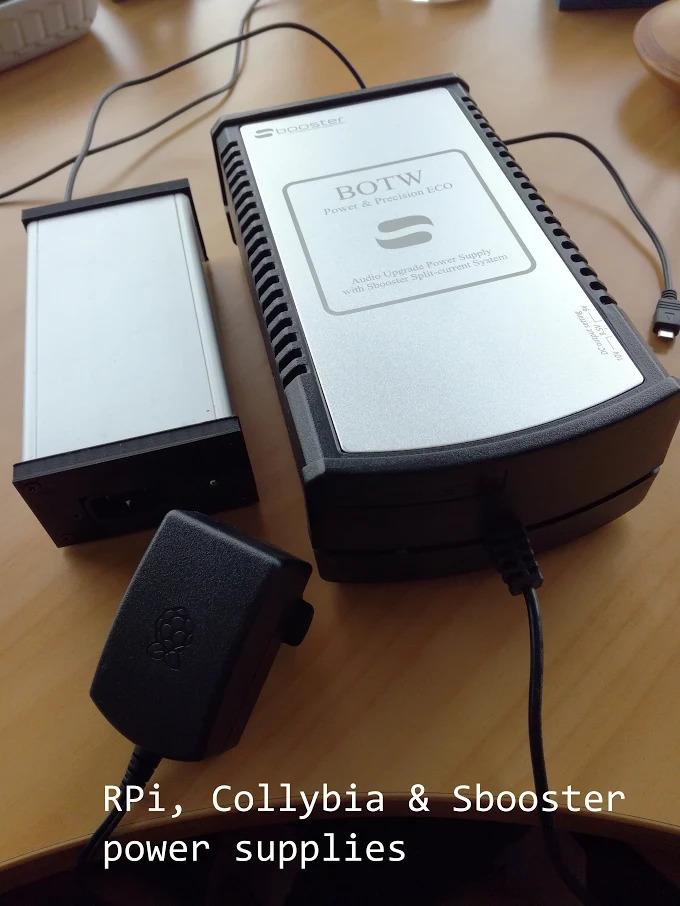 As I began my survey, the Collybia team introduced a superior audiophile DAC board, the Mamboberry LS+, which simply sits on a RaspberryPi, and runs on 5V. The concept is a bit mindblowing at first, that a device just 65 mm x 55 mm can render such high quality audio, and for less, only Euro55. Hot off the press as I write is that this has been upgraded again to an HD DAC+ (Euro60), running at 24-bit 192kHz with ultra-low jitter and high-end components. It's described as “the most audiophile DAC in the dac-hat market”. Better than the LS+ is quite an offer!

The original model I reviewed in July 2016, now discontinued, performed brilliantly but was a bit of an outsider, in that it required a 9V supply, so the official RPi PSU wasn't suitable. Collybia also now offer a superior linear power supply, which I look at in Part Three.