"Is this the standard of puns we have to tolerate from the Old Scribe today?"
Demand the Plebs' Chorus, stage left
Yes 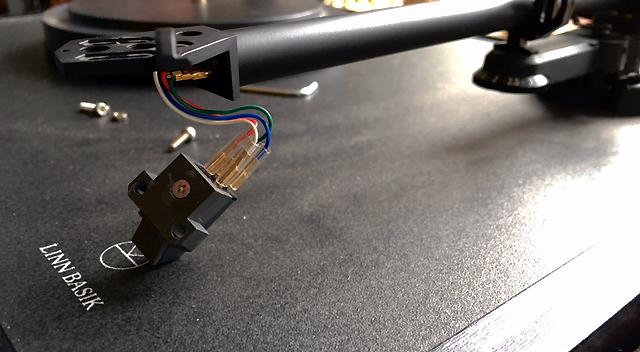 Probably hoping to replace the Rega Planar 2 on the shelves of its dealers as the de facto entry level turntable, Linn Products of Glasgow, introduced their own simple rigid chassis turntable. Carrying the new Akito arm, that replaced the Basik Plus arm this simple attractive looking turntable shared similar external dimensions as the LP12 Sondek and the continuing Axis turntables. While the Axis had shared the pre-Cirkus LP12 bearing, the Basik had a shorter spindle and simpler bearing. The Basik also lacks the Axis sophisticated but fragile electronic control for the motor. The Linn Basik turntable has a plastic sub-platter of the same dimensions as the mazak sub platter of the LP12 and a much lighter aluminium outer platter with a thinner rim and unmachined underside. 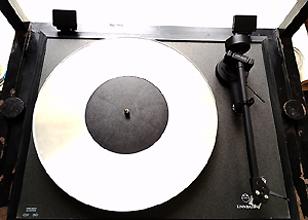 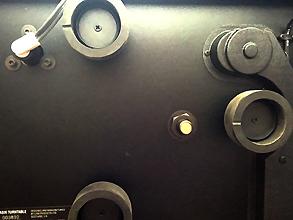 The Axis had widened Linn's turntable portfolio as the Sondek LP12 upgrades caused its inflationary spiral to exceed even those dark times, appearing at a keen £299 price point, in the late 80s originally with the Basik Plus LV-X and then with the Akito tonearm when it arrived with the Basik turntable. The Axis soon found itself adrift in the market place, with an escalating price competing against mid-price CD players, as its price rose in Mk2 form, and plagued by a reputation for motor power supply problems, so a cheaper to make entry level product was needed. The simple chipboard plinth of the Linn Basik turntable (superior to MDF due to its more random granular structure) carried the same Philips Impex 24-pole AC synchronous motor (originally conceived for Philips own video tape system) as the Axis and Sondek, but without the sophisticated Valhalla or Axis control system. The Linn Basik turntable control system is a rocker switch concealed below the front left corner of the plinth. 45rpm is achieved with a plastic pulley step.

The Linn Basik turntable was usually supplied with the Linn K5 cartridge, which superseded the Linn Basik cartridge (based on the AT91). The Linn K9 was named after the robot dog in the Tom Baker incarnation of the popular BBC TV sci-if series Dr Who, because it bears such a close resemblance to the robot dog K9's head. The Linn K5 is similarly shaped, but the name doesn't make the same connection and it is also based on the popular Audio Technica AT95 cartridge generator assembly. The K5, like its AT95 relative, has a plastic body, whereas the K9 featured a metal body. The plastic K5 body has similar bolt hole dimensions to the AT95, but the Linn cartridges are usually fitted with stainless steel Allen Bolts rather than the lighter aluminium bolts supplied with the Audio Technica AT95E. The Akito is a medium mass arm so the overall effective mass will be little changed, proportionately, by the heavier stronger bolts. Cartridge bolt material has more significance on the sound of low compliance metal bodied cartridges in rigid pick-up arms than higher compliance cartridges in plastic head shells like the Linn Akito.

Linn urban myths of the 1990s, repeated by Linn dealers to the Old Scribe, were that the Akito outperformed early samples of the Ittok. At the time your Old Scribe was in a position to try this comparison. The myth was total b*ll*x, and an early unmolested (thin pillar) Ittok was superior in every respect to the Akito, when tried on both the Linn Sondek LP12 and the Axis from which the two arms were borrowed. This Linn Basik belongs to Steve, an old friend of the Old Scribe, friends from attending gigs together back in the 70s.

The belt has recently been replaced on Steve's example. When removing a flat belt to re-use it, the outside and direction should be marked so that it can be replaced the same way. Otherwise there can be noticeable deterioration in sound for several sides of vinyl until the nap of the contact side settles; this makes no sense in physics or engineering terms but it is sometimes audible. Turntable belts can be rejuvenated by carefully wiping with a lint free cloth impregnated with furniture polish, being sure to remove any detectable traces of polish before re-fitting, and should last 5 years in regular use. The Linn Basik suspension consists of three flexible (possibly rubber) inverted cylinders. The rear one is prone to sag when the lid is raised, so only raise the lid when changing records. The lid is the excellent Perspex lid of the LP12 that replaced the awful clangy smoked brown polycarbonate version of the pre Valhalla versions. All tests were conducted on the much modified Origin Live Ultra wall shelf, originally designed to support the Linn Sondek.

We first listened to the Linn K5 cartridge with its old stylus. As checked by microscope at the local college, the old K5 stylus showed no chips or flat spots and a build up of gunge that was removable. With the equipment to hand it was not possible to measure the tip, which may have started life as a 7μ X 4μ diamond. At the lower end of the market, stylus tip sizing can be somewhat random, and the AT95E itself has been variously specified as 7μX4μ or 7μX3μ at different times in its production life.

The current production AT95E supplied for this turntable service, states 7μX3μ on its packaging. Despite the Linn K5 having a different plastic housing around its metal clad motor core, the AT95E stylus is a direct replacement. The front of the stylus housing stands proud of the K5 body, but this is only of aesthetic consequence. Arm height was riding rather high, when checked on a 180g pressing sitting on the LP12 type thin felt mat, which is an easy fix. The new stylus offered all the anticipated benefits of a new stylus. Even before being played in for a few hours, surface noise is lower, high frequency clarity is restored and the soundstage becomes clearer and wider with the new stylus.

A Spoke modified Linn Sondek LP12, with SME309 carrying a Benz Micro, was used as a reference between changes to the Linn Basik. This manages a wider and deeper soundstage than the LP12 of the last millennium. The Linn design priorities never seemed to major on soundstage scale whenever it was a trade-off against joie-de-vivre or soundstage solidity. This rig provided an essential ear calibrating source while tinkering with the cartridges in the Linn Basik/Akito. Steve's Linn Basik is sited on a pukka Linn jig for work to commence. 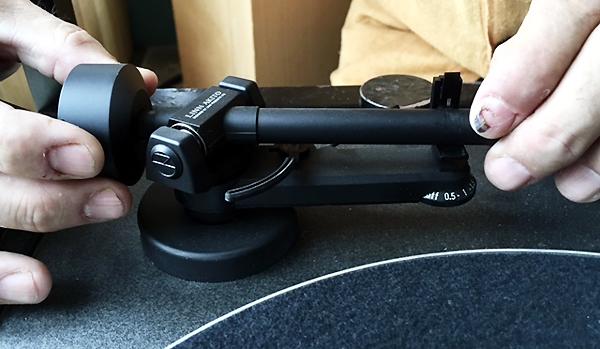 The Linn K5 is removed from the Akito arm. The Akito counterweight is carefully removed to check the state of the O-rings that secure it. Slacken the arm pillar set screw to allow it to move easily. While removing a counterweight like this, it is essential to hold the arm tube firmly and apply equal and opposite force either side of the bearings (see illustration) to minimise the possibility of damaging the bearings. While the cartridge and counterweight are off, the bearings' range of movement and smoothness may be evaluated by feel. With the Akito, it is easier to install the new cartridge with the counterweight removed, as it allows more clearance for the headshell to be raised further from the plinth surface (Ittok & Ekos must be removed completely when cartridge swapping) with the arm raised to a higher position. The Allen bolts were unscrewed and found to have been tightened hard enough for the nuts to have deformed the plastic Akito headshell. This had been done by the original Linn dealer (the cartridge bolts have been untouched since then) and was probably torqued with the enthusiasm usually meted out on Troika and Ekos. 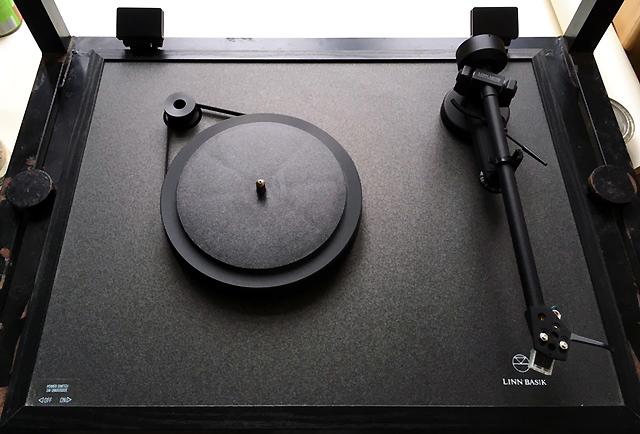 It transpires that the Audio Technica AT95E sits in a different position in the headshell slots when aligned using an alignment protractor. The give in both headshell and plastic cartridge body makes alignment a lengthy and tedious procedure. Careful tightening of the bolts repeatedly results in tiny shifts in cartridge alignment. Once aligned and fixed, the counterweight is balanced to zero and the arm allowed to float. Once again the vertical and horizontal bearings are checked for freedom, damage (grittiness or notchiness) and play. Set the counterweight scale to zero and dial in 2g (recommended tracking force). Check with a digital stylus balance and the markings prove to be way off. 2g indicated on the counterweight is actually 1.76g on the balance. Experience indicates 2g is good for an AT95E (excessive plummy bass can be had from 2.2g, high frequencies can get ragged below 1.8g) so that is set.

Bias is tried from 1.75, which transpires to be correct, by ear. Generally, sharper stylus profiles need more bias, so conical styli need least, gentle elliptical tips need a bit more, steep elliptical tips need even more and extended line contact types need most of all. Arm height was then set. A single Allen bolt on the arm base secures the pillar in position. Do not over-tighten this regardless of what you may read on various forums; the Akito is made from soft materials and you ability to adjust the arm height in future will be compromised by over-tightening now.

Changes in tracking force and temperature have more effect on Stylus Rake Angle, which is what you mostly hear from arm height changes, than arm height adjustments; TNT-Audio have researched VTA debates previously in these pages. Set the arm parallel or very slightly tail-down and stop worrying. Double check the tracking force with a digital balance and play. 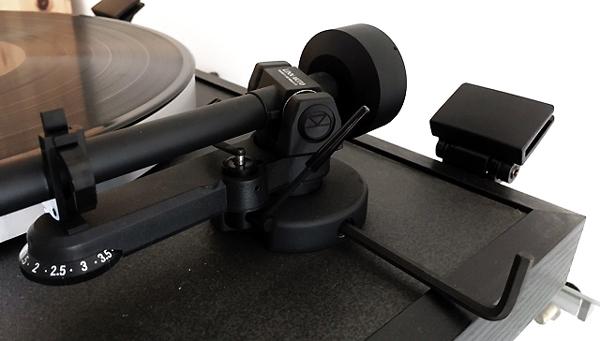 The improvements noticed when trying the new stylus in the K5 body now increase with a whole new Audio Technica AT95E. Whether this is attributable to new coils, new contact surfaces on pins or proper set-up is irrelevant. All these changes may have contributed to the improvements. The music rocks along with the typical Linn joie-de-vivre that Ivor's babies are noted for.

Bass quality and extension are improved. Vocals are clearer and voices sound more realistic. High frequencies have the usual effects of a new, as yet not run-in, stylus but hints at the future potential. High frequencies are the most limiting factor of the Linn Basik/Akito/K5 set up. The primitive motor power supply and lack of isolation limit transparency. The soundstage is wider and deeper than before, but still doesn't extend beyond the loudspeakers.

At the price that the Linn Basik vinyl source can now be obtained, it is unbeatable by any new products and would be an ideal first step up from supermarket or record shop offerings. From memory it beats a used Rega Planar 2 with the older Rega R200 arm with an Audio Technica AT95E, but an RB250 should be superior to the Akito. There some optimistic prices (over £150) for the Linn Basik Plus arm being asked on fleabay, but the Linn Basik turntable and Akito can be had for £300.
The used market is full of second-hand turntables at a similar price, but providing condition is good, this would be a good value used purchase for appearance and sound quality, especially compared to the complexity of getting a sub £1000 junker LP12 up and running.

The money spent on a new cartridge and the time spent on a service and set-up are easily justified in the improvements in sound quality, even on an entry level turntable with no fancy suspension.