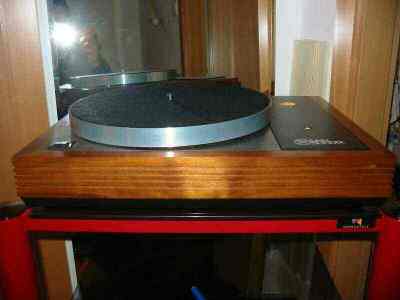 This articles is about the Linn LP12, which I first encountered in 1984, and which I possessed five samples of.
My first turntable at all was a Thorens TD126 with SME 3009/III tonearm and Denon 301 cartridge. One day someone told me unbelievable stories about Linn and Naim. Getting curious, I went to the next dealer. Immediately after the dealer put a record on the Linn, a big grin came to my face.
My first LP12 then was a black plinth, smoke lid, Valhalla equipped version with Linn Ittok tonearm and Linn Asak cartridge. I loved it and had a lot of fun, especially with classical music. This LP12 was sitting on a wall mount (DIY welded steel, made by a friend), which gave a considerable sonic improvement over placement on a sideboard. Associated equipment was a Naim clone electronic and a pair of active Linn Kan speakers on stands.
After five years I replaced this LP12 with a current one just to learn, that the sound is still the same. I sold this second 6 months later.

What has happened? Well, the answer lies in the character of the LP12: at first, it has a lovely midrange, which makes you smile, when you listen to a singer's voice, kind of tube preamp like. Then it gives some kind of forward movement of the music playing, which Linn fans call PRAT (=Pace, Rhythm And Timing). This forward movement gives a lot of joy when listening, but records which do not develop such a forward movement on the LP12 do sound definitely boring. Some records are such that you are hunting for "interesting parts" giving you the goosebumps.
This special forward moving presentation of the LP12 made me unsatisfied with real life music, when I started going to live concerts, be it rock, be it classical, be it jazz. By the time I learned that this "forward moving" of the LP12 is artificial and NOT part of the music itself. On the contrary, the LP12 is simplifying the music, subdueing all the more complex timing issues and replacing them with - yes, you guess right - forward movement.
After the LP12 period, I had a lot of turntables, Thorens, EMT, Garrard, Verdier, Scheu, Pluto, just to name the most important.
In 2000, a friend of mine wanted to get rid of his 1980s vintage LP12 (he was first owner), and I took the chance to try it again. I found it was nothing special and gave it to another friend.

In 2003, I had the chance to get two LP12 with more sophisticated power supplies or upgrades: one had a Naim Armageddon, the other the Valhalla power supply, one had a pre-Circus bearing, the other a Circus bearing, one had a stock top plate, the other a stronger steel plate with the motor position moved to the 7 o'clock position. At that time I also had an ultimate turntable to compare: the Pluto 10A. OK, so I started extended comparing and listening. I had the Naim ARO tonearm to fit on the LP12, and also had a Phonosphie P3 and a Well Tempered for even more comparisons.

The Valhalla sounds neutral, works fine, and I really cannot complain, but when I replaced it with an Armageddon, this "forward moving" gets exaggerated to the maximum. Unbelievable, yes, but unbearable, too. I thought that all those Naim fans must be crazy to prefer the Armageddon. While listening, I felt like doing full-load acceleration to the next traffic lights, then slamming on the brakes with my car.

The steel top plate gives a bit more dynamics and solidness to the music, but the difference is not big enough to lose hair about.

The Well Tempered equals the older LP12 with pre-Circus bearing, in that respect, that it has a warm, gentle midrange and sounds right most times.
Further experiments with the Well Tempered revealed, that it is vital to have the combination WT turntable and tonearm not torn apart, as the whole concept is more and better than the sum of the parts.
Overall I consider the WT of equal quality to the LP12. Although it sounds more neutral, it has other shortcomings, which I will not discuss further in this article dedicated to the LP12. 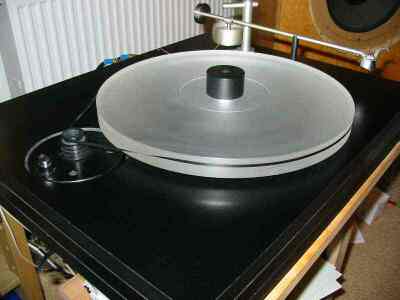 The Roksan sounds very different to the LP12. At first listening, it excels in overall clarity and fine detail, while at the same time good bass presentation. Though, longer listening and comparisons reveal, that detail is faked by resonances. This is very obvious, if you replace the Artemiz by a neutral tonearm (SME). With an SME, all the treble sparkle is gone, but the midrange and treble is more true. The other faked characteristic can be revealed by blocking the motor suspension. With blocked motor suspension, the timing gets true and real, but at the same time the bass gets overly lean.
Overall I consider the Roksan of lesser quality than the LP12. Although it sounds more neutral and clear in direct comparison, it has severe other shortcomings.

Now this is a different animal. While on initial listening very similiar to a Circus LP12, the P3 betters the LP12 in nearly every respect, be it resolution in bass, mid or treble, be it presenting complex timing issues, which the LP12 is not capable of, plus it has an extra octave of bass. Coincidently, Julian Vereker of Naim preferred the Phonosphie P3 to the LP12 himself, during his lifetime. 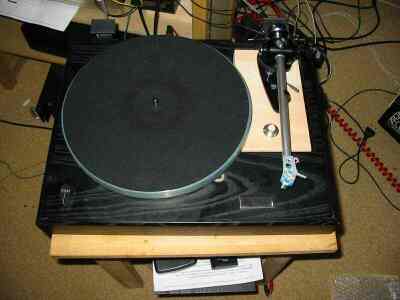 Compared to the Pluto 10A, the LP12 sounds overly warm, lacking transparency, lacking musical insight in timing and rhythmic issues, having a soft bass. If you take a familiar record, it sounds cosy and comfortable for three to five minutes with the LP12, but then it gets boring, and you are getting annoyed at the rhythmic simplifications, which becomes even more obvious than in the comparison to the Phonosophie P3.

While the ARO with its cleanness and leanness is a synergetic partner for the warm sounding LP12, it is not the best choice. Both Schroeder and Origin Live Encounter definitely give a more comprehensive presentation of the music, as the ARO severely lacks deep bass. As the OL tonearm is faster and leaner than the Schroeder, it represents a better match to both Linn LP12 and Phonosphie P3 than the Schroeder.

If you would chose an LP12 to live with anyway, I would recommend an 1980ies sample, which cost about 400 EUR without tonearm, but with Valhalla. I sold my last LP12 for exactly that money on ebay, and I think at that price point it is well worth the money. To keep the budget low, a Moerch UP4 tonearm is a great partner with ARO quality at a fraction of costs. If you need even more "forward moving" presentation, you can even build an Armageddon DIY. There are lots of information on that issue on the internet.

Yes, it is a love or hate thing. Either you get addicted to the LP12 sound, and are hooked, maybe for lifetime, or you hate its presentation, for not being really true. It is a philosophical question, too, whether you like being seduced and want to listen in a comfortable manner, or you want to listen to music as close to reality as possible. The goal of the second option is unreachable, as there are no perfect recordings and no perfect hifi components, so how much rose-tinting is acceptable, one might ask.
In this special case of the LP12, where better alternatives are available, I would just recommend looking at the alternatives. There are also other turntables than the above mentioned, look at say a Rega P25, or a Scheu, or a Thorens.
These all are more true to timing and musical architecture than the LP12. But are they more fun to you ?