Just to qualify the OPPO also from a technical standpoint, I made a few measures.

Distortion is quite low, mainly third and higher harmonics. It's in any case so low that its effect on sound should be hardy perceivable, if any.

As usual, I also measured the output jitter. I must say something before going to these measures. All the most recent, low cost DVD players I have tested have shown very modest, not to say plainly bad, jitter measures.

One of the possible causes is that any universal player requires several different master clock frequencies, and in order to reduce costs these are all generated by voltage controlled, non-crystal oscillators driven by PLLs (Phase locked loop) using a single reference crystal oscillator (usually 27Mhz).

In old CD Players the master clock was always directly generated by crystal oscillators, but again in low cost players, due to the very low quality of these oscillators, jitter performance was far from optimal (hence the use of the "superclocks").

The OPPO DV 970 does not depart from this multiplayer rule, as you could well expect given the price tag, and as is shown by the following FFTs, obtained using always the same test signal. However, I found out something unexpected.

The FFT of the OPPO digital output (bottom left) represents the correct test signal, confirming the multiplayer is correctly reading the digital data; the FFT of the audio front output of the OPPO (top left) is instead very heavily modified by a number of lines spaced about 60Hz, whose origin, internal to the player (my mains frequency is 50Hz), is unknown.

A similar jitter spectrum is propagated also through the SPDIF output down to the TNT1541 output (top right). As a comparison, I have added the FFT of the same TNT1541 driven by the same EWX soundcard used for FFT acquisition (bottom right), in the same configuration (please disregard the different floor level, caused essentially by the different reference).

The same spectrum as from the front outputs is obtained also from the mixed outputs, or setting the mode to Audio Only (not shown).

If you go back now to the Audio Nemesis DC-1 technical review, you'll see the two jitter spectra are very similar, which is in facts somewhat surprising. 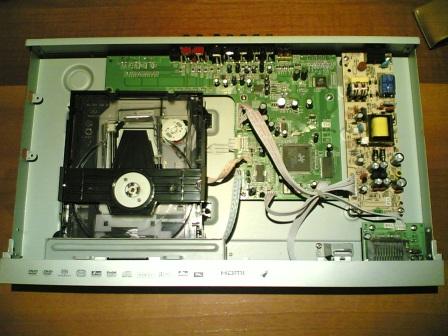 I tend to exclude that OPPO has introduced asynchronous reclocking on purpose. In facts, as expected, there is only one 27MHz crystal inside, and the player core is built into very few, off-the-shelf VLSI (very large scale integration) chips which implements all the clocking strategy, which in the end means that all the clocks are derived from the 27MHz one inside the VLSI chips, using PLLs or similar tricks.

The most probable hypothesis is therefore that the 44.1Khz sampling clock reconstruction method, possibly digital, causes the clock to be affected by some kind of jitter very similar to the one caused by asynchronous reclocking. The fact that no action has been undertaken to avoid this can be by the way justified by the good fame reclocking has in audiophile clubs.

Back to the OPPO review