Too much Legato, too little music!

Pioneer of Japan has for many decades been considered a serious player in the audio market, mostly in the commercial sector, but at one time, above it as well. To this day, I've never heard anyone challenge this company's reputation for building reliable products, if not always the best in their class.
Not too long ago, Pioneer introduced what they called "Legato Linear".
To the best of my understanding, this is in fact a variation on the theme or requantization, whereby a notionally 16-bit signal is by some form of interpolation turned into a virtual 20-bit signal. The idea behind this is to widen the frequency response, elevating it from the standard 20...22 kHz to twice that; and indeed, Pioneer quotes a 40 kHz frequency response for this player.
The main benefits are supposed to be greatly decreased phase shifts and freedom from compression, especially in the critical treble range, a notoriously weak spot of most single bit systems.

Well, model PD-S 507 has that technology, despite its truly modest price tag. And more - it also uses what Pioneer calls a "Stable Platter" system.
This translates into what is very alike to a classic turntable, upon which you place the CD, but upside down, with the program side up, not down as in most cases. The disk rests on a center plastic piece, itself mounted on a real, genuine platter.
Before you raise your hopes too high too soon, let me add that this platter is merely a gadget - it's too light to be taken seriously, in addition to which it is not too finely made and appears to be wobbling a little.
For you vinyl freaks out there, another letdown - no disc clamp, as for example in Electrocompaniet's and YBA units (yes, I KNOW they cost a helluva lot more, just noting!).

The fascia is plastic and rather tidy, with what I would call a very logical layout of command buttons.
Their action is positive, just about right, not too hard, not too soft, and better than most in this price class. To your right, there's a headphones 6.3 mm jack with its own dedicated volume control, a good move, much better than having to mute the overall output for the sake of headphones.
Speaking of output volume, it can be adjusted only via the supplied remote control, but as always, try not to fiddle with it, most CD players sound best at volume full on.

The backside is also very tidy and uncluttered, with only the bare minimum. Output RCA jacks are standard commercial fare, and are not gold plated - a pity. The mains lead is captive, so any changes will involve opening the case and doing some soldering - not recommended for the faint of heart. Also, no coaxial S/PDIF output, optical only; to my mind, this is a drawback. 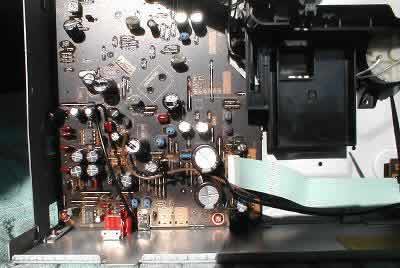 The insides are very tidy, as we have come to expect from Pioneer. Interestingly enough, they use Nichicon capacitors in most places, two 4,700uF/16V types dominating the show. However, most others are from the same source. Don't expect them to be of the High End type, no MUSE types, just the usual FG series.

The drive appears to be solidly made and looks good for many hours of use. The electronics are tidy and are placed on both sides of the printed circuit board. On the top side, there's an NJR4558D dual op amp in what I think is the low pass filter section, and a Mitsubishi 5218 op amp in what I think is the output section proper - I keep saying "I think" as I didn't have a circuit diagram available, so I'm just guessing from the overall layout and surrounding components.
In any case, tweakers could have a field day with this unit. They could experiment with different op amps, like OP275, OPA2143, AD826 and others, and they could enjoy reworking the power supply, as it uses discrete diodes rather than solid bridge rectifiers. Not to mention exchanging the capacitors for something really wild.

The player was taken out of the box as brand new. This forced me to break it in before doing any serious listening, which I did by installing two dummy RCA jacks with a 4K7 resistor across each, which is lower than the player is likely to encounter in real life, where twice that is the minimum, and over 20K is the norm. It was then put in repeat mode and left to itself for three days flat.
On the fourth day, I started listening to it, after I checked its output voltages for possible anomalies. However, to Pioneer's credit, I got 2.04/2.02V for L/R channels, bang on the specification for both the CD standard and the unit itself, with a debalance of merely 0,086 dB, which is absolutely negligible by any standard.

I always start at very low levels, sort of midnight listening. By default, I start with my very favorite Vivaldi, "The Four Seasons", music I can listen to any time, anywhere, on anything and still enjoy it.
On this CD player, the music attained an unnatural sheen, as if it were chrome plated where it should have been velvet covered.
The midrange was pushed forward, very much in-yer-face, very prominent. True, the amount of detail was also rather high, but the sense of scale was all but lost.

Turning up the volume changed nothing, really. No matter what and how I tried, the midrange had an unnatural sheen that I just couldn't get to grips with. At low levels, it is not too obtrusive, but at higher volume, it becomes hard to bear. After two or three hours, I felt in bad need of an aspirin.

A very strange one, this model; it has speed, it has dynamics, it cannot be caught out by fast passages of electronic music, but it has a pushy, forward sound with a false sense of sheen I've never heard with live music in my life before. I couldn't listen to it for longer than one CD, or about an hour.
To make matters worse, that's what I got through the Van den Hul D102 Mk3/HK 680/van den Hul 352/AR94 system, which is by and large rather soft, and certainly softer than most modern systems in its price class. It is also capable of bass lines to die for, both in quality and quantity, but with this player, it simply failed to deliver.

Of course, I could have switched the tone controls on and decreased the treble, but that would also decrease the real treble beside the prominent midrange in the 1-4 kHz range. And anyway, I never needed them before, so why now?

In the meanwhile, I also tried taking its original feet off and replacing them with SoundCare spikes, which have worked so well for me before. In this case, they had very little effect, and most of it was about the opposite of what was needed - they helped with more control, but in return, I got still more midrange and subjectively still less everything else. This is the first time something like this happened to me, and I retried, but to no avail. So I put the original feet back on.

Pioneer PD-S 507 is a unit made to impress in the dealer showroom; upon first listening, it will surprise you with the amount of detail it extracts, but once you have listened to it under proper conditions (i.e. your home, slowly, peacefully, and with no dealer or shop assistant hovering above you), I think you'll be in for a headache too.

But this is not to say this player is useless. It could be useful in systems with too much bass and too little treble, or in very shy, shut in systems; such systems it could revitalize to at least some extent.

If you have a nicely balanced system, in which nothing pushes or pulls, do not buy this one without taking it home for at least overnight. Or just pass it by.

Changing the op amps will improve matters, but to what extent and exactly how I don't know; I only know from experience that every time I take out a 4558 and put an OP275 in, I get better sound, with always deeper bass lines and clearer treble.
But that's hard line tweaking, so if you're not in that category, pass this one by, or add a bit more money and buy the incomparably better balanced and more natural Marantz CD6000.

All in all then, a pity - it has some strong, even impressive points, but it is subjectively too unbalanced towards the midrange to the point of being nasty and shouty. Just another digital ruffian, and one whose time has in fact passed. Could be a tweaker's delight, but best avoided if one is not a tweaker.