The Rotel brand needs no presentation. They have been producing in the near past many good sounding low and medium cost audio components. In the audiovideo era, however, even the most accomplished audio producers seem to have been so much distracted by the video mermaids, as to almost forget audio.

Have Rotel too abandoned their good audio practice, to concentrate on audiovideo? Direct verification was the only way to find the answer to this question.

Rotel have always been very effective in the low range, so we picked a component in this area. The RDV-03 in facts is a low cost progressive scan DVD player which also plays CDs.

As usual, we tested it essentially as a CD player.

The structure is rather impressive, even though not so evidently solid. The front panel is flat, in brushed metal, made probably of a relatively thin (few mm) sheet connected with other short sheet mounted square, forming a kind of metal cover. The structure is connected to the bottom frame with an impressive number of screws. The top and sides are made of another c-shaped thin metal sheet, bent over on the bottom plate and connected to this with six other screws; more screws connect the back panel to the bottom frame and the top.

The look is very serious, simple and elegant. I like it a lot. There are very few engravings on the black, brushed metal front panel, the strictly necessary ones, and they are inconspicuous at all. The controls are just a few small buttons. Very elegant indeed. The only mismatching element is the power pilot light, which looks a lot like a blue headlight...

Top and sides have a strange granular finish. Probably it helps in reducing resonances in this large panel; for the same reason, however, a square sheet of some kind of rubber or foam is attached internally in the middle of the top panel.

Operating the unit directly is very simple. All the usual, CD-player style controls are available at the right of the drawer: open/close, play, pause, stop, fast forward and backward, which pressed for a short while also allow skipping to the next/previous track.

The loading of a disk is rather fast, a few seconds only. All controls work fine, with no uncertainty or improper delay. A pleasure to use.

The back panel has a number of sockets. From the right, you find the IEC power cord socket, then the SCART socket, the external remote control connection, the switch to select the desired video output, then the video output sockets (s-video, component and composite), the stereo audio outputs and finally the digital audio outputs (electrical and optical Toslink).

Here too connections are quite straightforward.

The interior does not depart significantly from any other low cost electronic device. The only strange element is the number of small boards the circuit is distributed on; these are connected by a number of flat cables, which seems a little strange, as such an arrangement should be more expensive in mounting time than a single board design. Evidently assembling costs are very low, wherever it is assembled...

The main board contains a number of circuits, including the processor, the large "DVD-on-a-chip" component by Mediamatics, the AKM 4385 stereo DAC, and the RC4558 op amp found in so many oriental design converters.

As usual in low cost DVD players, there is a single quartz clock with a 27MHz frequency. 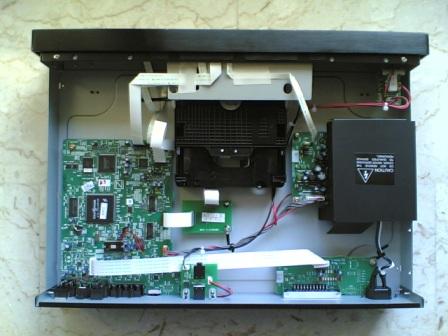 Globally the design seems to be targeted to concentrate on a few things, and to try to achieve a good results in the covered areas, instead of trying covering any possible application or solution or media with a less than optimal approach.

If you are interested, we have also made a few jitter measures, with rather interesting results. They have been published in a another article.

Very hard to find any real issue, apart the power-on pilot light.... which remains on in any condition, even when the unit is in low power state, enlightening the night all around. I must repeat, it is not a pilot light, is just a headlight...

Nothing else. Almost disgusting, isn't it?

The unit I got for the review was already gone through breaking-in, so I cannot say anything about it.

The sound is very pleasant, attractive, not tiring at all.

The global tonal balance seems correct, with just some euphonic bloom in the medium-bass area.

Even though the preeminence of this range does not help at all, the bass seems deep and even reasonably articulated, at least for a low cost product. Pace and impact take advantage of both these characteristics; in particular drums acquire a body that enhance the rhythm.

Highs are extended, but not edgy or acid at all. The sound is open, but in a very natural way, with no exaggeration. Medium frequencies are essentially correct.

The sound is apparently precise and detailed, transparent. The soundstage is rather wide, detailed, natural. The depth is correctly presented. There is not even too much of a veil between the players and the listener.

In one sentence, while listening to the RDV-03 it not so difficult to think "What more can I ask for?".

And still, this is a low range player. So, if you compare it with more expensive units, you just find that its sound could be better, by each and all of the sonic evaluation parameters.

By comparison, you can find that the presentation could be more detailed, the bass tighter, the highs more extended and natural, the soundstage deeper, the sound slightly more transparent, the veil somewhat thinner.

So many issues, then? No: the correct word, at worst, is limits. As must be expected with any low cost unit, they are clearly perceivable in comparison with higher level players in higher level systems, but at the same time not evident enough to be perceived as issues when just listening to the unit in a balanced system.

The fact is that this player has a secret: balance. "Balanced design" is the keyword of Rotel. In this case, the target seems perfectly centered: all the aspects of the player are evidently balanced, as far as to give a homogeneous and fundamentally correct presentation, without any outstanding element or feature, neither for the good nor for the bad of it.

So, as the best low cost players, it does not attempt to produce a very detailed sound with no sense of rhythm, like the Oppo, neither the opposite. The result is something similar to a stylized drawing of nature: you perfectly perceive the main musical lines, and in most cases even all the minor ones, but you loose some small details: here the voice inflexion, there some small vibration, and so on.

It is just a simplified presentation of the musical event. It is true, many small details are lost, but the general music plot is still perfectly conveyed to the listener. Also note that this is probably similar to the normal live musical experience, often taking place in crowded, noisy or huge and absorbent spaces, where some details are easily lost; moreover, the listener in this way can concentrate on the essence of music, and not on the small distracting noises made by the players...

Well, this is theory, at best. In practice, I must say that, in spite of its limits, I have really appreciated this player for its musical attitude.

I have also briefly tested the unit as transport: even in this configuration maintains his own character, with a slight but balanced deterioration of all parameters with respect to my reference transport.

The test of any low cost player presents the reviewer with some difficult issues, as it is not so easy to give a fair evaluation of units which cleary show rather evident limits.

In this case, Rotel has made my work simple. The unit is obviously not the best in the world, but is so musical, so pleasant to listen, that in my view whoever is more interested in music than in players should be quite happy with it.

However, even in a more audiophile approach, this is a safe choice for whoever wants a good sounding player at a very reasonable price. It can be a really good starting point, for newbies, or the perfect audiovideo source for a second, low cost system.

The price tag is definitely higher than the "Audiovideo supermarket" units we are nowadays used to, but the audio performance says that the Rotel RDV-03 is something completely different. Recommended.

Special thanks to Buscemi HiFi, historical hifi shop in the centre of Milan, and particularly to Mauro, for supplying the review unit.