As usual, we have measured the RDV-03 jitter.

The measure of output jitter at the audio output sockets shows a rather clean diagram and a relatively low noise floor. The main issues shown consist in the width of the skirt at the bottom of the central line and in a few more extraneous lines. 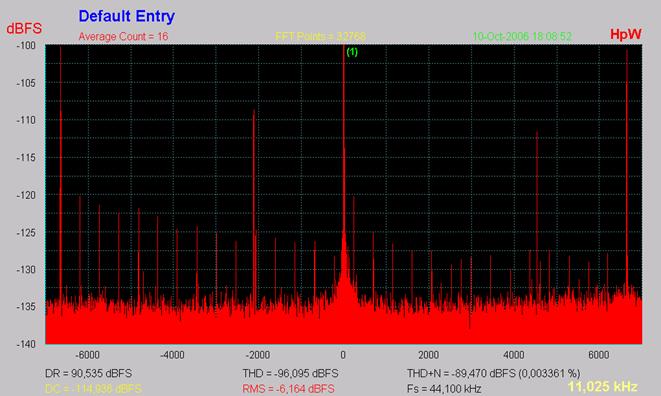 The width of the skirt shows a relative instability of clock frequency, which slightly oscillates around the central frequency with a statistical distribution in which the frequencies nearer to the central one are privileged. Usually this is due to thermic noise in the clock or in its power supply, but in this case it might also be caused by some PLL used to reconstruct the 44.1KHz sampling clock from the single 27MKHz crystal clock.

The origin of the other lines is unknown; however they are so important as to be very evident in the diagram.

Just to test which is the RDV-03 behaviour as a transport, we have connected it to our TNT1541 zero-oversampling DAC, with the decimation circuit excluded. 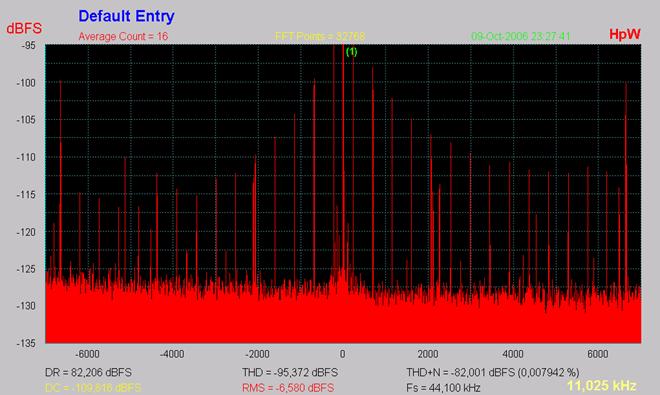 Here the behavior is far worse than the expected one. In facyts, usually this DAC has a nice behavior, and using it I got the best jitter figures after the Weiss Medea ones. In this case, instead, you can see that the lines spaced 459Hz, due to the toggling of the least significative bit every 192 samples in the test signal, are far more in evidence than usual around the central frequency ((11.025KHz).

This shows that the system is affected by an heavy signal-related jitter: the measure gives more than 3nsec. Such a problem is normally generated in the SPDIF interface. The issue is rather strange and unexpected, as digital receivers adopt special techniques to minimize signal related jitter, for example by basing the clock reconstruction on the data preambles, which are fixed and independent from data (preambles in facts are the elements that allow to understand where the data for each channel are placed in the SPDIF flow).

In order to understand the cause of this jitter I compared the SPDIF output signal of RDV-03 with the output of another source I have, a Terratec sound card, which connected to the TNT1541 produces a very reduced signal-related jitter.

The interface under examination is a true SPDIF consumer interface, so the expected levels should be in the +-200/300mV range. As a matter of fact, as you can see in the spectrum diagram above, and in the oscilloscope shot below, with a range up to 10 MHz, the Rotel is compliant, while the Terratec semprofessional card emits a far higher signal that is more in the AES/EBU range.

You might think that an excessively high signal might cause problems because of EMT disturbs and also potential saturation of the receiver inputs, and in facts some measures I made years ago seem to show such a situation. However from the current measures it is evident that the receivers used in TNT1541 have no kind of problem with such input levels. Looking however at the RDV-03 signal, it is clear that its curves are very soft, rounded, by the way in agreement with the norms and best practices, which suggest the designer to limit the SPDIF signal bandwidth in order to reduce irradiated noise.

It is however possibly the scarce slope of the signal fronts to make the transition point temporary position less precise, up to the point to make it depend from the previous history of the signal, introducing in this way the large amount of jitter shown in the diagram above

Also note, however, that such a jitter has not so much of an effect on the sound.