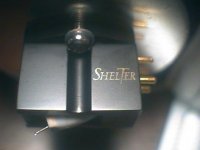 According to some internet audio gurus' subtle opinions, only two moving coil cartridges are really worth their salt these days. The very affordable Denon DL-103, and the not-unaffordable Shelter 501.
The former is well-known all over the world, the latter seems to be a mystique and elusive animal. Time for a formal review, then.

The Shelter cartridges (plural, as there is a more upmarket 901 too) and step-up transformer are made by Mr. Ozawa, a former employee of Fidelity Research. For those too young to remember Fidelity, this company thrived during the seventies an eighties, making wonderful tonearms and cartridges that made a splash all over the world. The FR-64S tonearm was one of the arms used during the design of the GyroDec, for instance (see a picture here).

Curiously, the Shelter doesn't even resemble any of the FR cartridges. The black metal body has all of the blockiness of a Koetsu, the frontal stylus alignment line of a Denon, the open bottom of a Benz, and Lyra-style cloth-covered generator. Simple and unadorned, the Shelter oozes class: if you like to think of serious cartridges as the equivalent of jewelry, then this is one bijoux.

The 501 comes with a curious metal stylus protector and two lengths of mounting bolts and nuts. Speaking about mounting, the 501 lacks threaded holes (unlike the 901) and so mounting is something of a minor hassle. Luckily that protective metal cover can be kept in place at all times, and then there is always the added luxury of my SME IV's hands-off approach to cartridge alignment. Even then the job of holding the cartridge under the headshell, while trying to keep the fingerlift on top of it, and threading a tiny bolt was a lot more difficult than the same chore with the nude, unprotected, but threaded, Scheu.

Apart from this, the elliptical stylus made alignment easy and not too critical. Loaded with 1.8g the 501, fresh out of the box, buzzed somewhat on the third torture track of the Hifi News test record, and jumped out of the groove on the fourth track! After initial run in, about 10 hours, tracking improved in that the first three bands could be tracked well enough. Still, checking the waveform on an oscilloscope revealed a certain cyclic instability at all modulation levels that I remained a bit worried about: my 13 years old Denon DL-301 in a Thorens TP-16 arm tracked a lot better! Given the reports of impeccable tracking I got from one or two 501-users on the internet, it seems Shelter have some sort of tolerances and manufacturing consistency problem. But please, do mind that nothing of this ever detracted from the listening experience: with music signals there was no mistracking at all, and the slight wavering was not audible. (In fact this confirms me in my belief that the HFN test record is not the ideal tool for cartridge alignment or evaluation).

Having that nice portable Tek still at home I measured a channel imbalance of 1dB, favouring the right. This is at the edge of the cartridge's specified tolerances, but that does not mean that I like it or am willing to accept it in a product of this cost. To be fair to Shelter, I've had similar (and worse) problems in the past with moving coils from a certain Danish manufacturer of some weight, so it really isn't something of small cartridge builders only. On the other hand, people like Benz/Lukashek manage tolerances of .5dB. 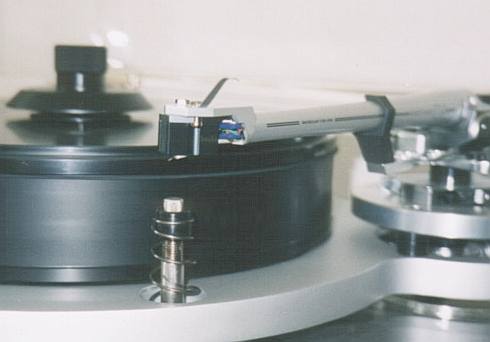 In its first hours the 501 sounds rather odd and weird, but it soon settles down to something more palatable, and then just keeps improving. What you get is a sound with quite some power and dynamics, married to a slightly warm and lush tonal balance. Images are lush too, easily bettering the Scheu on depth, and entirely matching that cartridge's wonderful width. The result is a sonic vista like no other source I've ever had at home. And I like this. To me, the larger the 'view' on the imaginary soundstage is, the better I can forget about the system, and the more I can get into the music. That's why I am very sensitive to components that 'mono-up' the sound, of press it flat to a piece of paper. Chalk one up for the Shelter then.

Now a wide, open, grand stage isn't everything. It can be generated by fuzzy-sounding phase-anomalies, and at the other side of the spectrum, it can be sharp-etched like a blueprint. Neither of these presentations is, in my opinion, truthful. The Shelter, much like the DL-103, errs to the soft-focus side of things, the Benz being a bit more specific.

Dynamically too this cartridge is no slouch. Much like the Denon, in fact, even more so than the Denon, drums thwack out with verve, and the sound is very much more alive and powerful than with the Benz cartridge.

Voices are rendered magnificently, full of emotion where applicable. And this abundance of emotion, of a live-feeling, is perhaps what this cartridge really is about. Treble resolution is less than what the Benz Scheu manages, and overal there are some slight colourations: tonally the 501 is indeed warmer than strictly neutral (not a bad thing), but it lacks the evenness and coherence of the Scheu, sounding a bit more dirty, less refined and consistent. But again, the Scheu then lacks a bit of that emotion and soul which the Shelter seems to dispense so easily.

Let me explain this with an analogy some of you will understand. The Scheu is a lot like the Quad ESL-63 loudspeakers: very neutral, dependable, not very dynamic. The Shelter is more like the original Quad electrostatic, the ESL-57: not quite neutral, with some marked limitations, but ultimately very exciting and cutting straight to the heart of the music. Maybe this conveys my meaning, although it must be said that the differences between the cartridges are less dramatic than the differences between those venerable loudspeakers.

Familiarity breeds contempt, and prior to this review session I wondered whether I was really happy with my MC Scheu. The Shelter taught me what a fine cartridge the Benz Scheu really is, and that I ought to be happy with it. It did so not by being bettered by it, which it wasn't, but by means of contrast: both cartridges excel in entirely different areas, while not letting one down in the remaining disciplines. Both are cartridges I can easily live with, and a forced choice would be pretty hard for me. Maybe not to you: if a more restrained, neutral and finely resolved sound is your cup of tea, then get a Scheu as it delivers just that without ever sounding clinical. But if you value sheer emotion, life, and wide-open images to apparent precision and that hifiness so in vogue today, then the Shelter is defintely yours.

Ultimately I feel the Japanese cartridge has a slight edge, because it makes the music a tad more interesting ...