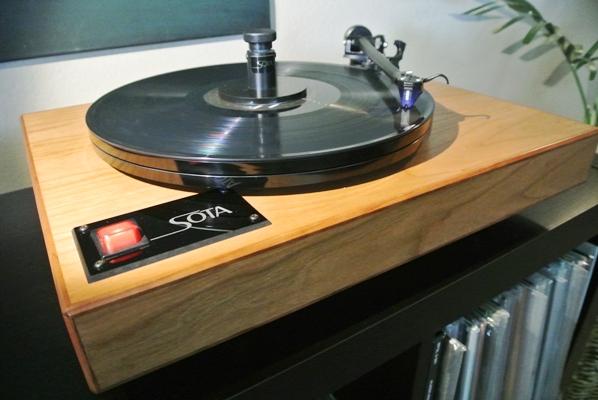 Since 1980 SOTA has been a well regarded manufacturer of high quality turntables made in the USA. Today, SOTA offers a wide range of turntables from their flagship MILLENNIA to the entry level MOONBEAM. Additionally, SOTA Services and Service Center aka Kirk and Donna Bodinet faithfully provide parts, repairs, upgrades, modifications, LP Cleaning Machines and other accessories. If you send in your old model SOTA table, they will bring it up to current specs or let you trade it in on a current model.

The subject of this review is the newly released COMET SERIES IV TURNTABLE. I owned a SERIES III so I was particularly interested to listen to the latest version of this table.

Vibration is the enemy of turntables and during the record playing process every part of a turntable is subject to a variety of internally and externally caused vibrations. The more these vibrations can be reduced the better. The COMET'S platter is made of high-density polymer material sandwiched between two layers of precision-machined 3/8" Plexiglas. Additional polymer material is added to the top of the platter to create a mat. 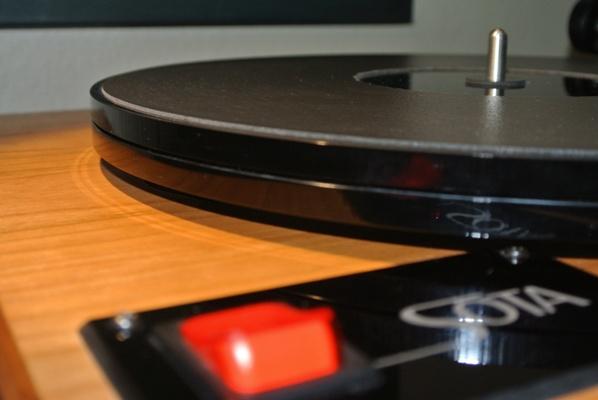 SOTA uses various types of energy dissipating polymer materials throughout the COMET, not only for the main platter, but also for the sub-platter and bearing cup assembly, all of which are buried under the plinth. The Spindle/Bearing Assembly is designed in-house, manufactured of a high-tech material called TURCITE, which is a Teflon-impregnated, self-lubricating polymer designed specifically for ultra-precise bearing applications.

The sub-platter is driven by a 24-pole AC synchronous motor originally designed for ultra-precise computer use. A precision-ground, low-tension belt provides further isolation of the motor from the platter. The COMET is equipped for both 331/3 and 45 RPM.

The cabinet continues to isolate vibrations from the platter by way of a monolithic, internally dampened cabinet, which effectively provides isolation and energy-absorbing leveling feet which incorporate a proprietary visco-elastic polymer pad to damp vibrations.

The COMET turntable includes the S-303 tonearm. It is described as a one-piece, tapered arm -tube design which offers maximum rigidity, optimal coupling of cartridge to arm, and cancellation of inner arm resonance. It utilizes precision ground bearings for minimal friction and durability. The S303 tonearm offers adjustable anti-skating, damped cueing, and can accommodate a wide range of cartridges.

A dustcover, vibration isolation pad and SOTA'S I-Clamp are available as an additional accessories. The I-Clamp is said to further enhance sound quality, so I requested my review sample with the I-Clamp and listened with it in place.

The table arrived in a sturdy cardboard box which was light enough for me to easily move around, about 30 pounds total weight. Upon opening I could see the contents were well protected with a copious amount of custom molded foam. I requested the upgraded wood finish and pre-mounted with Ortofon's 2M Blue cartridge, about $1770 complete.

My initial impressions were positive. The overall appearance of the table is attractive, it's more retro than modern, with a seventies vibe. There is only one large red power button and the tonearm. All I needed to do was lift the COMET into position, level it and plug it in. The leveling feet are easy to use and once set are stable over time, they won't come loose. The vibration reducing discs which cap each leveling foot appears effective, provides a scratch-free contact spot for the turntable sitting on a shelf. 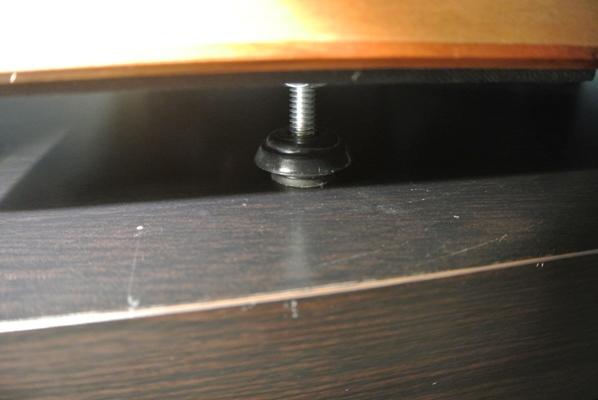 The plinth is real wood, attractive and flawlessly finished on all four sides. The S303 arm looks sleek and capable in flat black, which creates an attractive contrast between it and the wood plinth. The belt is hidden under the platter, and the cables and power cord come from beneath so the surface of the plinth looks like a solid slab of wood. The power cord is 12 feet long, which can come in handy if you are trying to reach a wayward wall outlet. Everything about the COMET is thoughtful and well executed. 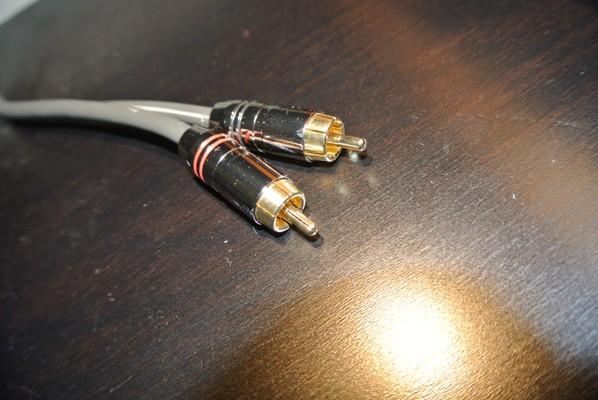 I verified the accuracy of the platter's speed, using a KAB disc and strobe. As far as I could determine it was dead on at 33 1/3. 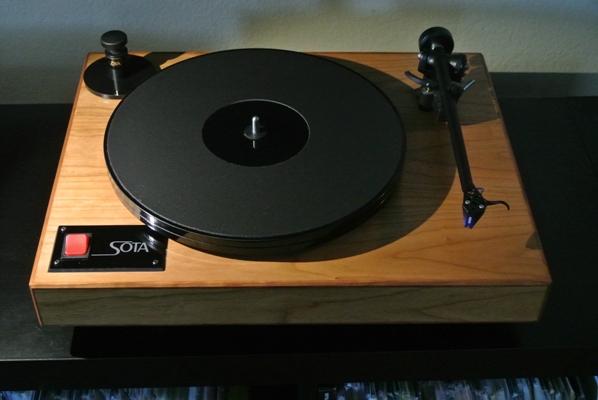 I placed "My Head Is an Animal" by Of Monsters and Men on the platter. I did not notice the LP had a slight dish-shape until I clamped it into place. The screw-down SOTA I-Clamp was effective at flattening out the LP and achieving solid contact with the surface of the platter. It is also easy to use. After using tables without plinths for a couple of years, the COMET felt solid and stable as I steadied my hand on its wide wooden plinth and dropped the needle on the tune "Slow and Steady." A solo kick drum began to beat front and center which sounded tight and deep. As the track progressed, highs tones were detailed and smooth and cymbals crashed with good clarity. Hand claps off in the distance to the right of the virtual sound stage were well defined and placed deep into the background.

Norah Jones' and Billy Joe Armstrong's "Foreverly" is a remake of the 1958 Everly Brother's "Songs Our Daddy Told Us." The LP was recorded over 9 days and exudes a warm analog sound. The pairing of Armstrong and Jones sounded like a strange coupling when I first heard of the LP; I am a fan of both could and found it hard to imagine these two voices harmonizing but it works well and makes for an enjoyable listen. If you haven't heard it, I recommend the LP for both the music and sound quality. The last song of the LP, "Put My Little Shoes Away" Norah Jones plays a Pump Organ to deliver some very deep bass notes, some of the deepest I've experienced in my home. The Comet combination tracked the most difficult sections without giving any hint of stress, and delivered well controlled deep bass notes. Fans of rock, hip hop, metal or organ music should be pleased.

The Grateful Dead "One from The Vault" is one of my favorites; vintage Dead at their best. Recorded live August 13, 1975 at The Great American Music Hall it was never available on vinyl until recently. I ordered one and once it arrived I placed it on COMET'S platter, flipped the big red power button on and sat back. The vinyl played on the COMET produced far superior results than the CD version I had been listening to for the last 25 years or so. The CD doesn't offer the detail, dynamics and "live" feeling present on the vinyl. Listening to "U.S. Blues" I could easily distinguish guitars from one another allowing me to follow Jerry Garcia's line. The COMET extracted the details on the vinyl version that I has not been able to hear previously listening to my old CD, it was kind of like seeing Hi-Def TV for the first time.

I am a fan of Beck and recently purchased Morning Glory. The LP comes with a digital download, which I put on my iPod. The LP sounded superior to the digital download; played over the COMET the LP had a natural musical tone. The string section which begins the second side sang in a warm vibrant tone. The sound stage was appropriately wide and deep with instruments and vocals firmly in place and with a good sense of air around the instruments. Beck was successful in recapturing the lush sounds contained on Sea Change, and the COMET was successful at communicating the music.

The COMET SERIES III is a solid and reliable turntable; I owned one. But the COMET IV surpassed the performance of my III in every way, even with it loaded a more sophisticated cartridge: Ortofon's 2M Bronze. The IV played deeper with better controlled bass, and was more dynamic. The soundstage was more vivid too, with better definition. 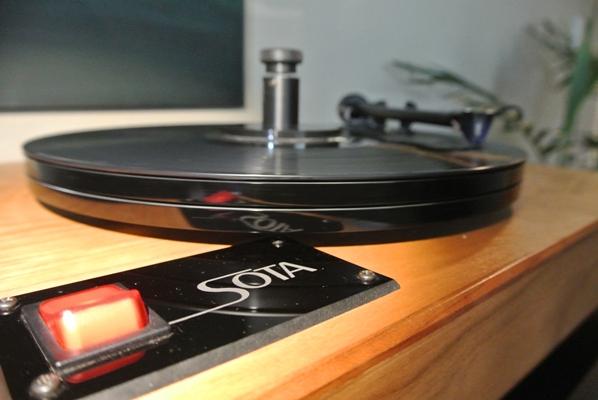 For the new comer to the vinyl scene or an experienced audiophile who simply does not want to endlessly fiddle with fine adjustments, SOTA'S COMET SERIES IV TURNTABLE might be the 'table for you. Its simple appearance and ease of set-up belie its sophisticated performance. Within minutes of unpacking it provided a satisfying musical experience which kept me spinning my vinyl collection. The COMET SERIES IV is the total package. It looks great, keeps constant speed, excells at tracking, produced a natural musical tone and sang in a warm vibrant sound that only analog seems to deliver. It never failed to communicate the music contained in the grooves of the records I placed on its platter. At its price it's a bargain and should be on the short list of turntables to consider even if you have more to spend.