Yes, there are alternatives to moving coil cartridges 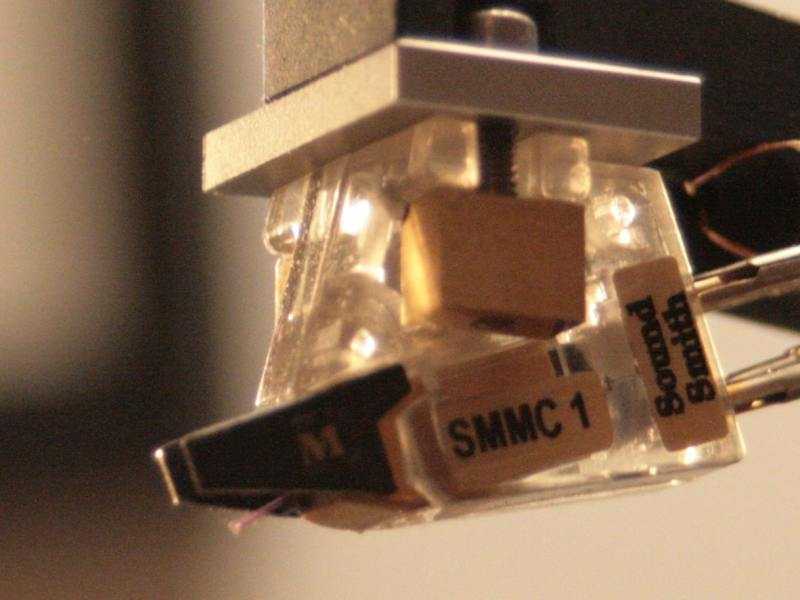 I became aware of Soundsmith cartridges through enthusiastic reports on the strain gauge cartridges they produce. Two years ago, when there was a gathering of local high-end audio DIY folks in Berlin, I had the chance to listen to such a cartrige at Frank Schroeder's place. The Strain Gauge was mounted of course in a Schroeder tonearm on Frank's own turntable, now commonly known as Artemis Labs SA-1 turntable. But there was also another setup, also with a Schroeder tonearm, but on an old Onkyo PX-100 direct drive turntable, and on this turntable, the Soundsmith "The Voice" acrylic body moving iron cartridge was installed. We listened to both setups, and while the combination with the Strain Gauge was superior in the bass region, the setup with the "Voice" had a beguiling, even more natural sound, while at the same time showing about the same resolution. Frank told me that the Strain Gauge only had played some hours, and that it needed very long to run in. Anyway, I thought, I should keep an eye on these products in the future.


Last year, when I browsed the Soundsmith web site, I had a close look at the product range, and found that the SMMC1 had quite the same specifications as the "Voice", at a considerably cheaper price. The Stereophile "A" rating made me order it. As there is also a very cheap variant for 250 USD, I also ordered that. I had chosen the "medium compliance" versions, because my tonearms all have higher mass than usual.

Ok, these cartridges even in so-called medium compliance version still show a quite high compliance, but they are a few gramms lighter than common moving coil cartridges. So, using a more or less normal tonearm yields the correct resonance frequency. I had some reservations about possible cantilever movements on warps or out-of-center record, but there were no problems using them even in my 18 to 30 gramms effective mass tonearms (Schroeder No.1, Pluto 2A, FR-64S). Of course I used a light headshell with the Soundsmiths in the FR tonearm! For convenience reasons, I did a lot of testing with the FR-64S, as exchanging the headshells was in a breeze.

I ordered the compensated versions, so these should need only 100pF loading, thus no extra loading required, but later we will investigate this more in deep.

If you have a really light tonearm, like the SME 3009/III, or the original Mission 774 (the John Bicht design), or the Audio Technica AT-1120, you need the higher compliance version of these cartridges. I also tried the cartridges I got into one of these lighter tonearms, but I found that the cartridges do perform better in the above listed higher mass tonearms. So, the medium compliant moving irons are better matches for normal mass tonearms. 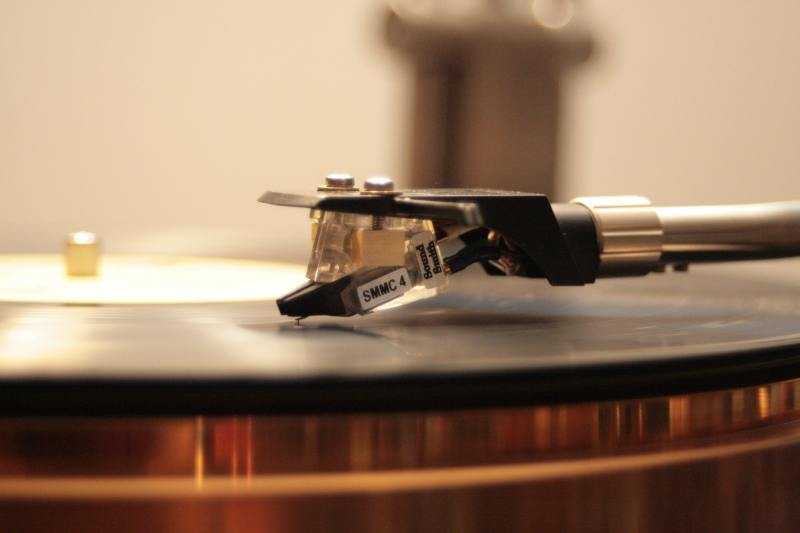 Being careful, I tried the cheaper cartridge first. This SMMC4 sports aluminium cantilever and elliptical diamond. Well, the first tones were a bit on the shreaky side, but the cartridge improved from hour to hour. After maybe 20 hours, the sound settled, and showed no further improvements. The SMMC4 then was good enough to really enjoy the music on the vinyl. The sound did not resemble that much the Voice or Strain Gauge, except a kind of absence of bloating or thickness. The SMMC4 rather reminded me of the standard Denon DL103. The sound was a bit colored (like the 103), a bit unrefined (again like the 103), but it lacked the plastic grey tone of the 103, and it seemed to be faster as well. 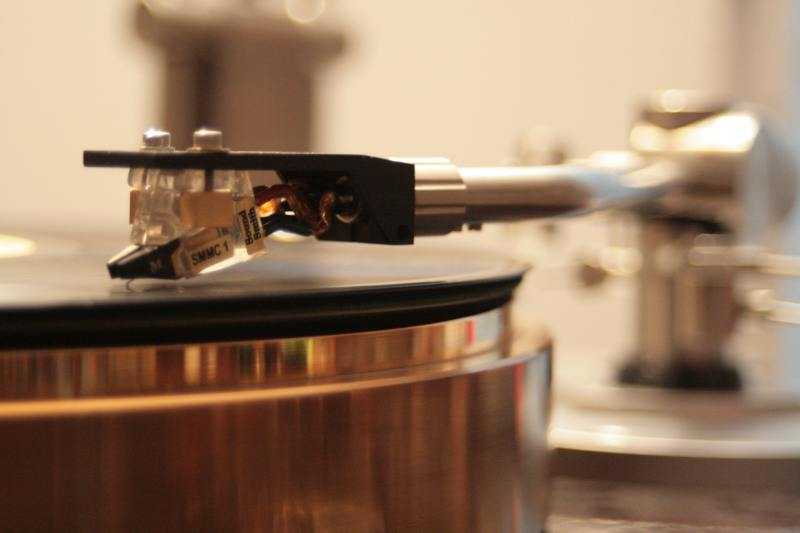 The SMMC1 sports ruby cantilever and contact line stylus. When I exchanged the SMMC4 for the SMMC1, the improvement was immediate. Now we are in serious class. My sonic memory told me "Lyra" from the first tone, and that says it all. Right from the start, the SMMC1 is very similiar to a Lyra Helikon or standard Myabi in presentation. Fully run in, the SMMC1 is less colored than the Myabi, that means as neutral as the Helikon, but it betters both of them in midrange resolution, and like the SMMC4, is fast like hell. What the SMMC1 shares with the Helikon and Myabi, is the absence of punchy bass. On the contrary, bass is very natural, there are near endless details in the bass when listening to classical music. After break-in, the SMMC1 showed a character similiar to Lyra Skala or Ortofon MC5000, but with more low-level resolution.

After complete break-in of both cartridges, I did some measurements, using the Hifi-News test record pink noise track, and ARTA version 1.6.1 software. I connected line-out of my preamp to the line-in of my laptop and looked at the results. For pink noise compensation, I loaded a compensation file with inverse pink noise frequency. Both cartridges measure nearly identical, with the only difference being the height of the treble peak: the MMC4 peaks 2dB less than the MMC1. 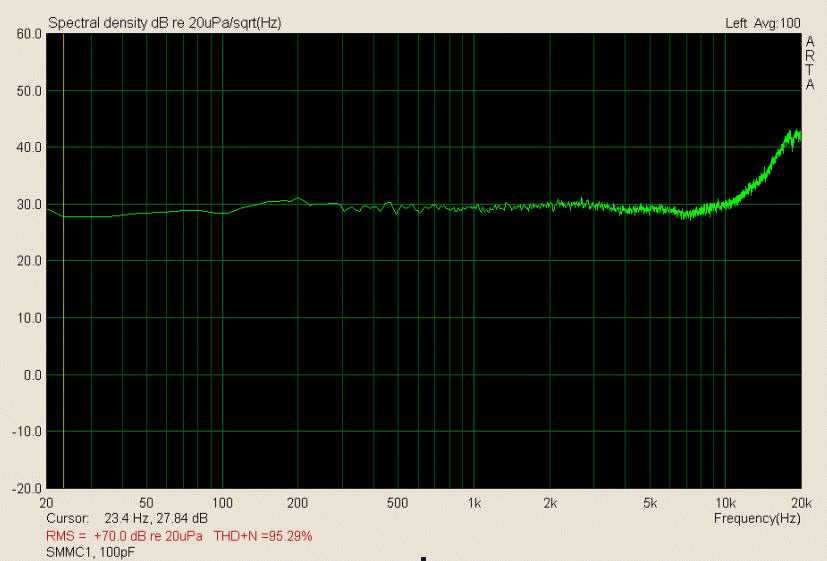 If you consider the frequency response strange, let me tell you, that the Lyra Helikon also has a 10dB peak, and the Lyra Skala even 15dB ! If you want to have linear frequency range, the older Linn cartridges, and also the Denons have it.

Then I tried out the effect of changing the cartridge load. Lowering the resistive load decreases the 1k region, while the capacitive loading attenuates and widens the treble peak. Lowering the resistance from 50K to 25K damps the 1KHz region down for about 1 to 2dB. There was virtually no change to see with 500pF, I needed 1000pF to have a visible effect on the treble peak. It took me more than 2000pF to get the treble peak down. With 3000pF there was even treble loss, so I settled for 2300 pF. 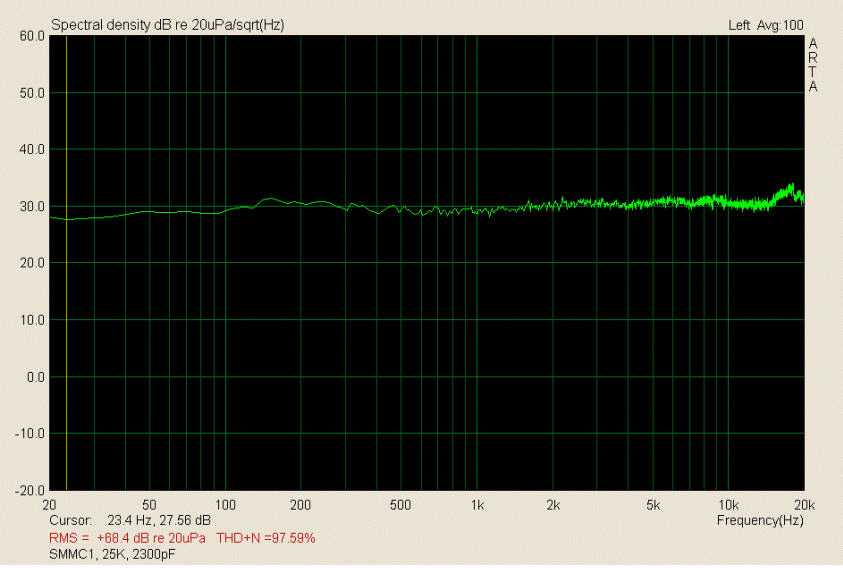 Could we get any better? I asked myself. Then I reworked the loading again. 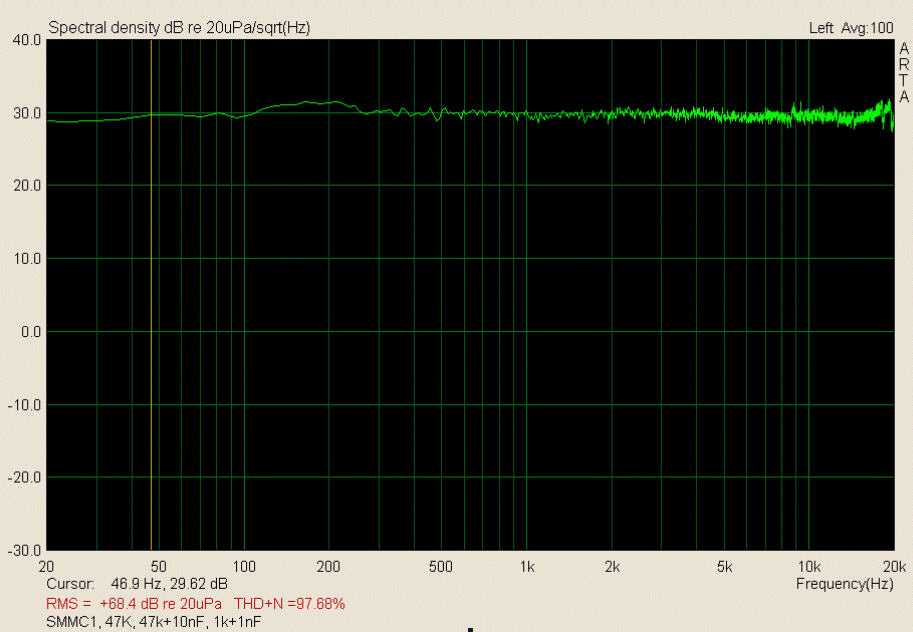 How did I get that? Well, it took me some hours, but there it is: I went back to normal 47k with 100pF loading at my preamp and added new loading resistors and capacitors at the phono plugs. In order to eliminate the upward tilt into a more even response or downward tilt, I used a so-called zobel of 47k in series with 10nF for the midrange, and the remaining treble lift I got down with another zobel of 1k in series with 1nF.

Of course I was very interested in listening again with this more linear frequency range ...

Both cartridges showed enhanced performance with proper loading. I could concentrate better on the music, and soundstage improved a lot. The SMMC4 now was more alike the Denon 103R, and the SMMC1 had a better balance with beefed up bass region. I could play the music louder, without listening fatigue.

I enjoyed a lot of records with the optimized SMMC1. Listening to the 2LP-soundtrack of Apcalypse Now is a really frightening experience. I found the SMMC1 performed equally excellent when listening to classical music in general. The SMMC1 showed life like detail and a realism to such a degree, which most other cartridges never can deliver.

When longer listening with the SMMC1 on the FR-64S, the sound got a bit edgy, I thought it could be too much energy into the steel tonearm. Unfortunately, I had no wooden headshell at that moment (e.g. a Yamamoto), which I could try with the FR-64S. So I had to mount the SMMC1 into the Schroeder, which was not only a more comfortable combination, but also showed way enhanced low level resolution. There is also the option to order these cartridges with wooden body instead of acrylic body, at a premium.

Sometimes, especially when listening to rock music, I asked myself, whether I really do want such a high degree of resolution, as the MMC1 is able to deliver. By loading the cartridge, I could even Koetsu-fy it. But this is beyond the scope of this article, for sure.

The SMMC4 cartridge is recommeded to all those, who don't want to spend a lot of money in their analog setup and have a normal tonearm like Rega RB250. The SMMC4 if a better match for the Rega tonearm than a Denon 103, and last but not least: you don't need an expensive moving coil transformer to get the very best out of the Denon. If the phono stage is integrated in a receiver or integrated amp, it is very likely, that the moving coil input is a lot worse than the moving magnet input. The SMMC4 responds well to proper loading, and plays well in nearly every tonearm. Strong recommendation!

The SMMC1 responds also well to proper loading, and when combined with a good matching tonearm (or headshell) provides results on par with the very best moving coil cartridges, but results depend very much on the matching with tonearm and of course the phono stage. Whether such a high level of resolution is desirable, is indeed a question of personal preferences. For myself, Lyra Skala and Ortofon MC5000 are cartridges that I tried at home, but were not up to my liking. I am more hooked into old school sound, I prefer the vintage Koetsus, Kisekis, FR-MC cartridges to Zyx, Lyra, Transfiguration and the like. But at its price, the SMMC1 can stay at my home. Whenever I need that high resolution, the SMMC1 is perfect: it gives the Lyra Skala not only a run for the money, it is simply better!