Technics comeback in the HiFi market has certainly not passed unnoticed! Two series of new components, brand new versions of the glorious SL1200 and a new SL1000 that should be a modern version of the legendary SP10 turntable...too many new components for not trying to give 'em a chance.
I've been offered, by Panasonic, to review the SL-C700 CD player, which is part of the “entry-level” (so to say) series of this new Technics family. Its partners are the SU-C700 integrated amplifier, the ST-C700 network player and a pair of bookshelf loudspeakers, the SB-C700. Forget the price of earlier entry-level products from Technics as these components are priced nearly at 1000€ each. Hence, it is not exactly “budget class” gear.

First and foremost, though being available separately, these components are meant to work together and to be purchased together, a strange decision that certainly limits the possibility to “hit” the market like they might. This CD player, for example, doesn't have a remote control, just a control cable to connect to the integrated amplifier SU-C700, that does indeed have a remote. Hence, you end up paying 1000€ for purchasing a remote-less CD player. And the remote can't be purchased separately, since the unit accepts “control” via a physical cable only. Weird.

The SL-C700 can be operated directly via its touch-screen switches, general menus included. Technically, it seems it has been carefully designed, great care has been taken in each and every area. Summarizing, it has a so-called “Ultra low distortion oversampling digital filter”, a “Re-master” function that upsamples the 16/44 signal from the CD up to 32 bits/176.4 kHz (via interpolation), a high precision master clock and independent TI/Burr-Brown PCM1795 DACs (one per channel). This D/A chip has been used by many companies, for example, the Pink Faun 4.32se we reviewed three years ago is based on a 1795. Other DACs that rely on the virtues of the PCM1795 are: Luxman DA250, Teac UD301/501, Denon DA300 and DA10, M2Tech Young and many other acclaimed DACs.

The analog section has a symmetrical layout to minimize interference between right and left channel, making use of high quality passive components, claimed to be “carefully selected through listening tests”, and a high rigidity metal double chassis, with inner and outer steel plates. Finally, the SL-C700 uses a 1x playback transport, to minimize the noise generated by the mechanisms and motors. Impressive, or so it seems, I'd say. These are the claimed tech specs in detail: 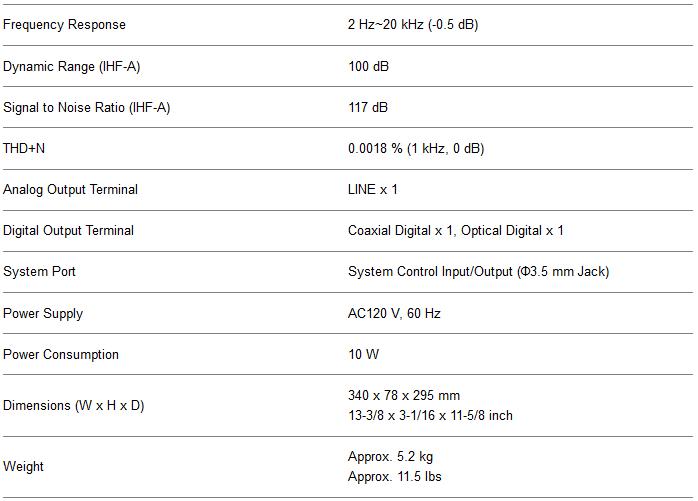 This CD player works smoothly, track access is quite fast and so is TOC reading. Touch switches are a joy to use and, if the unit is close to your listening seat (as it should always be), you won't desperately need the remote. Will you?

During my audiophile career I've come across several Technics components, mostly amplifiers and...CD players. Their sound has never impressed me, as it was quite far from what I define “audiophile”. Hence, my expectations weren't high. Now, with this “comeback” it seems the Technics designers have spent much time and effort trying to build something that can stand alongside the competition. Priced at 1000€, the SL-C700 should exceed my expectations. Well, to be honest, I'm puzzled. This player does something quite right, and something else rather wrong.

The tonal balance seems to favor the high range, but unfortunately this emphasis isn't partnered with harmonic richness. The high range is there, but it sounds a bit “essential”, dry, lifeless. Voices, for example, have a good presence effect, but it is not easy to distinguish them in a choir. The choir is “homogeneous” rather than composed of a blend of single voices. Female voices, from time to time, do have some trace of harshness.

Generally, this difficulty in detecting and following different portions of the musical program can be found even with instruments, not only with voices. Traces of confusion and homogenization, here and there, make the sound appear as a whole, instead being a “puzzle” of different pieces that magically mix together to build a unique musical image, so to say.

The bass range is good, in terms of quantity, though lacks energy and articulation in the first octave. The bass appears a bit “gummy” and of the “one-key” kind. It seems this player prefers to focus on the “fundamentals” and forget to give music the breath it deserves.

The re-master/upsampling/interpolation function doesn't seem to help, either. I haven't been able to detect any kind of improvement.

The performance in the dynamics department is quite good, though sometimes some trace of confusion can be heard, especially with highly energetic musical programs. The sound is fast, transient response is quick, but so seem decays as well, which isn't a good thing. Indeed, this behavior makes the sound a bit incomplete, as if this unit is always in a hurry. This could be good with rock and electronic music, but it leaves the listener with a bitter taste in the mouth when playing symphonic music, choirs or acoustic jazz.

The soundstage is a bit “forward”, while the focus of the image is good. Even the stability of the contours of singers and players appears to be very good. The depth of the image isn't enough to avoid that kind of “wall of sound” effect that I don't like. Even the width of the image should be better, as it makes the 3D stage constrained by the space between the loudspeakers.

A meaningful pic of the missing remote of the Technics SL-C700 :-)

Manufacturing & finish.
This CD player is nicely built and the touch screen switches add some class to the unit. Anyway, the asking price is a bit hefty, in my opinion. 1000€ for a CD player without remote is something that should be avoided. Placing an IR receiver in the front panel and adding the remote to the whole package is the first step to improve the quality/price ratio of this component. Secondly, this CD player doesn't offer the possibility to play music from memory cards or USB pens/devices. Many “cheap” CD players offer a USB socket for this purpose. Thirdly, since the internal DAC seem quite sophisticated, why haven't the designers planned to add a digital input as well?
Sound.
I'm not sure whether the sound of this player is “intentional” or “by chance”. Certainly the designers should rethink this unit and compare it to the competition in the same price league. With minor modifications it could be a tough competitor for many but, at present, it certainly has too many faults for a serious recommendation. Good with rock and electronic music, it simply lacks the natural breath certain music requires. It needs more insight, clarity and harmonic richness. Evidently, it is not enough to use good ingredients to make a good plate.

The SL-C700 is a nicely built and looking CD player but, besides lacking a remote, it needs to be re-thought out and re-designed in order to make its musical performance on a par with similarly priced competitors. It lacks authority, harmonic richness, clarity and breath, though being quite dynamic and punchy. I'd suggest to forget the bells and whistles and to concentrate on sound alone.