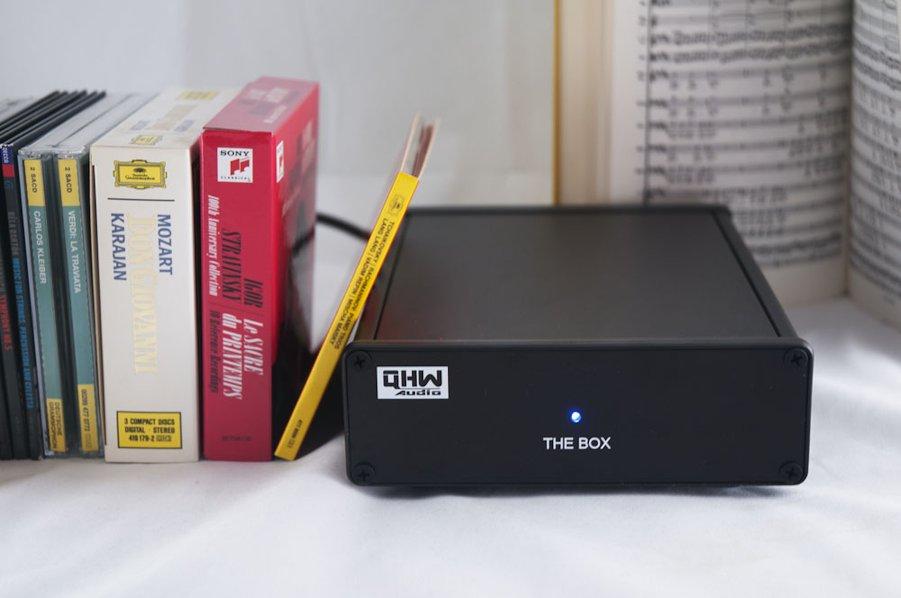 I don't say the word magnificent very often. Well, I am a Yorkshireman and we are renowned for our quiet understatement (as well as infamous for certain other traits). But as I audition more and more of my music collection with this device in my playback system, that word comes to mind above any other. One of the joys of auditioning products is finding those that faultlessly and consistently deliver on the vendor's promise to significantly enhance my music listening experience. The Box is that kind of product.

In Spanish I would say magnifico. This unassuming black box (it had to be didn't it?) contains proprietary electronics including an in-house developed 'correction' or signal reconditioner op amp. To get the effect, you simply add it into an analogue line signal - I connected it between preamp outputs and power amp inputs. It can be connected between source and amplifier also.

Instantly, this linear amplifier has the very pleasing effect of enhancing definition, presence, and dynamic range. It's designed by a music lover for music lovers. The developer Francisco Vizcaya Lopez is an audiophile, and a classical pianist since the age of 6 years, and a professor at the local conservatory, the Real Conservatorio Superior de Música de Madrid. Francisco composes and plays, and has recorded Mozart piano sonatas, and Schubert's Impromptus. He also studied Civil Engineering and Computer Engineering in Madrid. But music is his passion.

The Box black box seems mysterious in what it does to the sound quality, magical even. But it's not really - it applies a 6dB gain and reduces susceptibility to cable and system effects, such as energy losses and noise, and impedance mismatching.

There is no equalization or any phase effect applied to the signal. The key is the discrete operational amplifier developed for this and subsequent products, named AE2270, which is subtly designed. Francisco worked on the development for more than a year, making lots of combinations with different architectures of each stage, collecting and processing data from simulations, and making a real circuit for each of the most competent ones found by measuring and listening. Once the right architecture was selected, the next step of making it in SMD technology (surface-mount device) moved the performance on a step due to shorter signal paths and better thermal coupling. The result is a really good compromise between THD, noise, slew rate, and bandwidth, specially for audio.

For the best effect, components used are high quality, the PCB has double copper thickness (both for the AE2270 and for The Box circuitry), tracks are unusually wide (almost all audio tracks in The Box have a minimum of 1 mm width), and a really good and expensive toroidal encapsulated transformer is used.

From first listening, there was no doubt of the very good effect on timbre and space, without introducing defects. By timbre, I mean the tone quality of music heard, in terms of fidelity of instruments and voices, sharpness, realism, richness, clarity and brightness. In the notion of space, I'm referring to the three-dimensional nature of the sound - width, depth, envelopment, localization, and reverberation.

In conclusion, whatever it is doing, it sure makes my music playback sound marvelous. It takes my daily music experience to the level of magnificent. If you want an easy, unpretentious, highly effective enhancement to your music listening pleasure, then this is a system upgrade for you. And at this price, a most excellent deal it is, too.