The Return of the Idler

The belt drive killed the idler drive turntable. Well not quite. The idler drive became a closed chapter in the history of turntables in the late seventies until it was brought back from the dead in the 21st century. One of principle contributors, possibly the main catalyst, for this resurrection was Jean Nantais. His "Home Despot" post on Audiogon, in 2004, spotlighted the inherent qualities of the Lenco L-75 idler drive turntable and described the modifications one could do to transform this forgotten design into a giant killer. The Home Despot post went on to become the longest post in the history of Audiogon and spark a tectonic shift in the turntable world. Jean Nantais now sells his TJN Lencos all over the world, mostly through word of mouth and internet chatter. TJN does have a representative in Kitchener Ontario and in Moscow!

So, what is so great about the idler drive? Certain performance characteristics are embedded in the idler drive DNA. It produced superior PRAT (pace, rhythm and timing), attack and slam (some people call this impact). On the other side of the coin, the idler was condemned by the guys with the golden ears for high noise and rumble. The holy trinity of idler drives is the Lenco L-75 / 78, the Garrard 301 and 401 and the Thorens TD-124. The Lenco idler drive design features a huge motor, a very heavy platter and highly effective idler wheel configuration. What Jean Nantais taught us was that the Lenco was the simplest and most technically elegant design. The Swiss engineers created a masterpiece of simplicity and performance that makes it a perfect candidate for modifications that could nullify the noise and rumble issues that originally killed the idler turntable business.

The reader will note that I have diplomatically avoided the whole idler vs belt drive debate. As is the case with all things audiophile, many people become completely convinced of something and cannot even imagine that there is another option. So, for those who believe that it is impossible for an idler drive turntable to perform as well as or better than a belt drive unit, that's fine. As long as you are happy with your choice all is well.

Before going any further, I must declare that I am a huge fan of rebuilt Lenco idler drive turntables. Over the past 10 years I have owned and rebuilt, for myself and others, at least 8 Lencos (looking at my photo archive). As long as I have a vinyl record collection, I will own an idler driven turntable. I am writing this review with the intention of not allowing my love for Lencos to get in the way of an objective reporting of the facts. It is up to the reader to decide whether or not I am to be trusted.

So now I have in my possession a TJN Reference Lenco MKI for review. Let's see what 20 years of evolution of the Lenco modifications and perfections has produced.

Since Jean Nantais started experimenting with idler Lencos back in the late 90's his turntables have been in constant evolution. He now offers 3 levels of upgrades to the Lenco, the Classic MKII, the Reference MKI and the Reference MKII. The model received for review is the Reference MKI which retails for $6250 US. In order to fully describe and explain the many changes made to the original doner Lenco to produce a TJN turntable would take many pages so here follows an attempt to condense all that into something more digestible.

Many of the TJN modifications have for objective the elimination of stray vibrations. Pierre Lurné said it best; "the ideal scenario is to eliminate, or at least reduce as much as possible, all stray vibrations as quickly as possible and as close to the source as possible". I am paraphrasing here but that is essentially Pierre's message. The longer the time that the vibration lives and the farther it propagated through the turntable components, the more damage to the music it will generate. The second major area of TJN modification is in the optimization of the drive train. This includes modifications to the idler wheel and the wheel tension mechanism as well as the spindle assembly.

The following is a brief listing of the differences between the TJN Lenco I have for review and the original L-75 donor turntable. This is my list and not a list provided by Jean Nantais. It is not intended to be complete and thorough but is provided as a means to better understand what you get when you buy a TJN Lenco. The reader is free to consult the many pages of information provided on the TJN website.The photo below shows the heart of the TJN design.

Follow the vibration path; The TJN design channels all residual vibration energy into the heavily dampened top plate which is very solidly (16 screws) mated to the heavy, constrained layer, plinth. 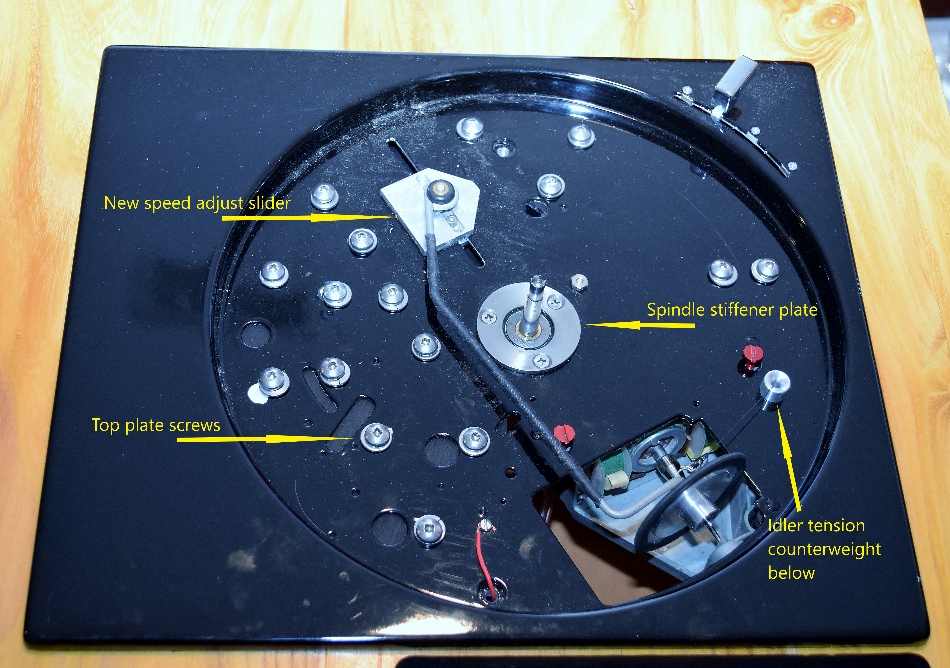 Over the years I have had quite a few hours of listening time with TJN Lencos. Most of those hours were listening to Arthur Salvatore's Lencos. But this is different, now I am in my listening room, with my system, my records and my tonearm and cartridge (with the exception of the first part of the test which was done with Jean Nantais' tonearm). This is a perfect setup to really understand the contribution and inherent characteristics of the turntable. It should come to no surprise to anyone that I found the performance of this turntable to be outstanding. The results speak for themselves. All of the good things about the original Lenco are still there and everything else has been improved to the point where it is difficult to find anything to critique. There is really no use listing characteristics, they are all great. At this point I asked myself, "what impressed me the most?" I expected slam and punch and I got it, no surprise there. What did surprise me was the deep, punchy, extremely clear and precise bass that was salient on pretty much anything I played. The TJN Reference MKI is truly a very high-end turntable.

Dire Straits - Brothers in Arms: The title track stands out; crisp, clean, sharp attacks on drum beats. The low volume vocals on the title track were remarkable because of the clarity of the Knopfler's voice. One could understand every word even though it is almost a whisper. I don't think that I have ever been able to say that before.

Saint Saëns - Organ Symphony. Orchestre Symphonique de Montreal, Charles Dutoit conducting. This record has everything a reviewer could ask for, dynamics, speed, slam, and of course lots of bass from the pipe organ. I have been to OSM concerts and can visualize the placement of the instrument groups in the orchestra. Listening to the record it was easy to reconstruct these placements. Everyone was in their place. the Adagio was a revelation; the contrast of the deep bass organ notes against the string melody awakened me to an aspect of this compositions that I had not fully appreciated until now. Definitely a consequence of the clarity and precision of the TJN Reference MKI. This record is going on my desert island list. How would I get speakers that go that low on to a desert island?

Oregon - Out of the Woods: Deep crisp, tight bass. Very punchy. Precise focus and separate instrument placement. The percussion solo on track 2, I think it's a Tabla, is a "you have to hear this" experience. I have played this album many times over the years and I believe that I have never heard it sound this good; detail, articulation, imaging, bass .....

I could go on but you get the picture. The first half of the testing was done using a Funk Firm FX-R tonearm provided by Jean Nantais and my Denon DL-160 cart. The second half was done with my Linn Akito arm and Dynavector DV XX-2 MKII cart. The Denon cart easily sounded better on this 'table and arm combination than it did on my other turntables no matter what tonearm I have used it in. As for the Linn - Dynavector combination, well it was simply in another class. Jean supplied me with an extra armboard so I could mount my own tonearm; which I will now give back to him with holes in it. Hope he has a Linn tonearm! 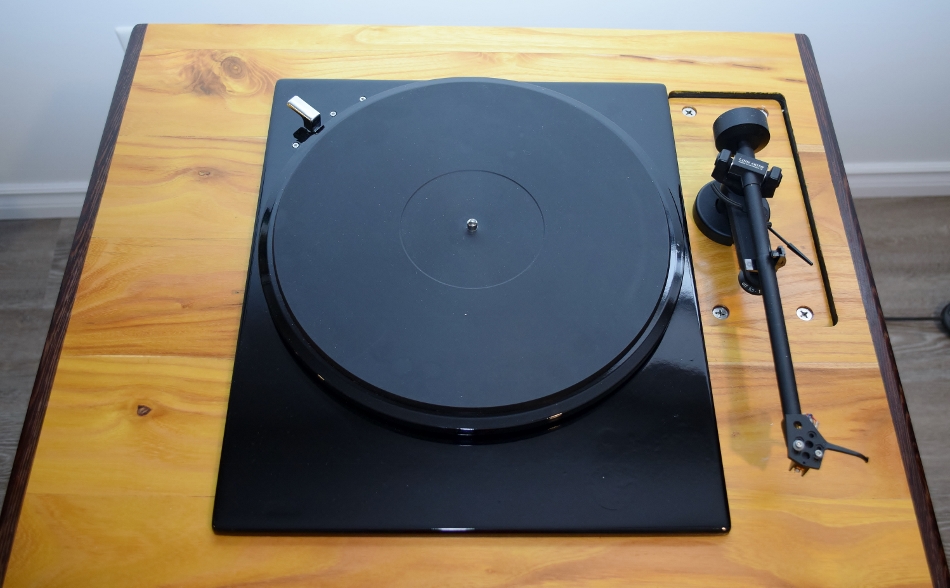 There is not a lot to pick at. Well I have to find something. OK, the On-Off switch could be a bit more elegant, it is an industrial style toggle switch mounted under the right side of the plinth. Works fine though. The original Lenco top plate has a few holes in it that need to be filled and the top plate professionally painted. The result on my test unit is not perfectly smooth, looking carefully, one can see some surface imperfections where the holes used to be. Lastly, my wife didn't like the colour combination and the armboard screws. She wants brass screws with a slot head!

First of all, Jean Nantais deserves a very large helping of credit for having realized and understood the intrinsic potential embedded in the original idler drive Lencos back in the late '90s. The TJN idler turntables are the culmination of many years of thinking, experimenting and perfecting an extensive set of modifications to the original Lenco idler drive turntable. The result is a design that maintains and optimizes the original qualities of the Lenco while removing the negative traits that led to the demise of the idler design. Some of the modifications in the TJN Lenco are discussed on the internet, the most important source for this being the Lenco Heaven web site. DIYers beware, TJN turntables are produced by professionals. Only the most skilled and well equipped DIYers could aspire to reproduce something similar. Even if you could, there is no replacement for 20-plus years of experience and development. For those readers who are thinking, "Ouch $6000. US is a lot of money for a turntable!" Well, I just did a quick check, on the Musicdirect web site there are 25 turntables listed at over $5000. US. TJN turntables are not about bling and high-tech mumbo-jumbo, they are about solid Swiss engineering optimized to squeeze out every last drop of performance. The bottom line is this; a stock Lenco idler sounds pretty good, the performance of this TJN unit is massively better. If I had the money set aside to purchase a new turntable, I would choose the TJN Reference MKI in a heartbeat.

Here is a partial list of music played for this review.

DISCLAIMER. TNT-Audio is a 100% independent magazine that neither accepts advertising from companies nor requires readers to register or pay for subscriptions. After publication of reviews, the authors do not retain samples other than on long-term loan for further evaluation or comparison with later-received gear. Hence, all contents are written free of any 'editorial' or 'advertising' influence, and all reviews in this publication, positive or negative, reflect the independent opinions of their respective authors. TNT-Audio will publish all manufacturer responses, subject to the reviewer's right to reply in turn.