Listening with The Wand 14-4 Turntable 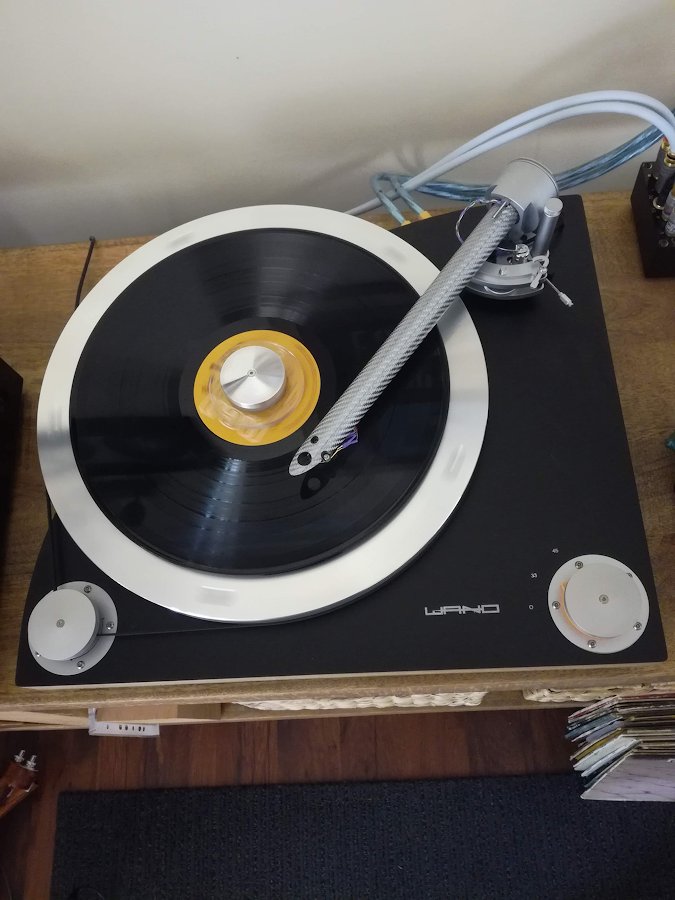 A turntable for playing records properly

If you read elsewhere recently of my enthused first impressions of an early version of this hand-made turntable, you might well have realised that I liked it so much that I upgraded to it from my Clearaudio Emotion. That was with a pre-production unit, and since then this turntable has gone into production with a host of improvements. These are not merely cosmetic, as each is a simple, yet elegantly clever, functional enhancement or refinement. My first impression was that this is a turntable that is a pleasure to use and is standout value-for-money at the price, especially when future updates and upgrades will be readily adoptable. As a long-time turntable user (since about 1972, and including Garrard 401, Linn Sondek, and Clearaudio Emotion), I had a good idea of what I was looking for that would constitute a significant upgrade - and I found it all, and more, in The Wand 14-4 Turntable.

Designer Simon Brown really has made a magic wand for my record collection, turning it into a fresh adventure playground of sonic delights. Yes, The Wand combination of turntable and tonearm is that good. My previous review was of The Wand 14-4 Turntable with The Wand Plus tonearm and Hana EL cartridge. Now I've used the turntable extensively with The Wand Master Series tonearm and a Hana ML cartridge. That is a music magic combo! Every time I play a record, I'm surprised by how excellent it all sounds. It's not like listening to a record being played. The music just 'flows'.

My Linn Sondek and Basik tonearm was the pride and joy for record playing in my music system for a quarter of a century. That is until an afternoon of A-B comparison brought Emotion into the setup, from Clearaudio. This added clarity and less susceptibility to audible interference from nearby footfalls, the bane of using the LP12. Just a few years later and the Satisfy tonearm just didn't do that enough once I fell under the spell of The Wand Plus tonearm from Design Build Listen. After reviewing that arm (part 1 & part 2) and later the Hana EL cartridge, I made stepwise enhancements to the listening experience by adopting both to my system. Now, when comparing the Emotion with The Wand Turntable, it was clear to me that another leap in record playing performance is possible. Don't misunderstand me, the Emotion does a brilliant job with The Wand Plus/Hana EL partnership. Yet, I could clearly hear a more dynamic and cleaner sound from The Wand turntable. Both logically and emotionally, the The Wand Turntable also designed by Simon Brown has captured my muso heart.

So why change to The Wand Turntable, for that's what I decided to do? The Clearaudio had provided very enjoyable listening, yet developer Simon Brown seems to have addressed all of the design aspects I have increasingly felt could be improved upon in my record playing setup. The decision to switch was very easy.

Firstly aesthetic appeal - The Wand Turntable looks more engineered and less manufactured - a more serious machine, of wood and metal, not lightweight acrylic. The unit sits low. Speed control and change is easier, and the control knob is conveniently at the front of the turntable. The drive belt is more robust, and I don't have to handle it to effect a speed change. The platter is far more substantial. Leveling and vibration damping is superior to the lightweight Emotion. The disc clamp is screwed on to the spindle, and the dust cover is not attached to the motor board (stability was affected by the hinged cover on the Linn Sondek). The arm mounting is designed for The Wand arms.

Oh, and the sonic performance! I had an audition opportunity on one of the prototypes a few months ago, and very quickly fell in love with the ease of use, engineering elegance, and superb sonic performance.

I've considered the special features of this turntable to see how well each contributes to my listening pleasure. This turntable comes from the design, build, and listen ethos that brought forth the acclaim-earning The Wand series of tonearms. That's the first attractor for me, and it's hand-made in New Zealand, with barely any plastic parts. I've enjoyed using The Wand Plus tonearm for some time, so was keen to try out the partner turntable. It has the designation 14-4 because it has a 4-layer composite 14 inch platter. It's quite a striking machine to behold. 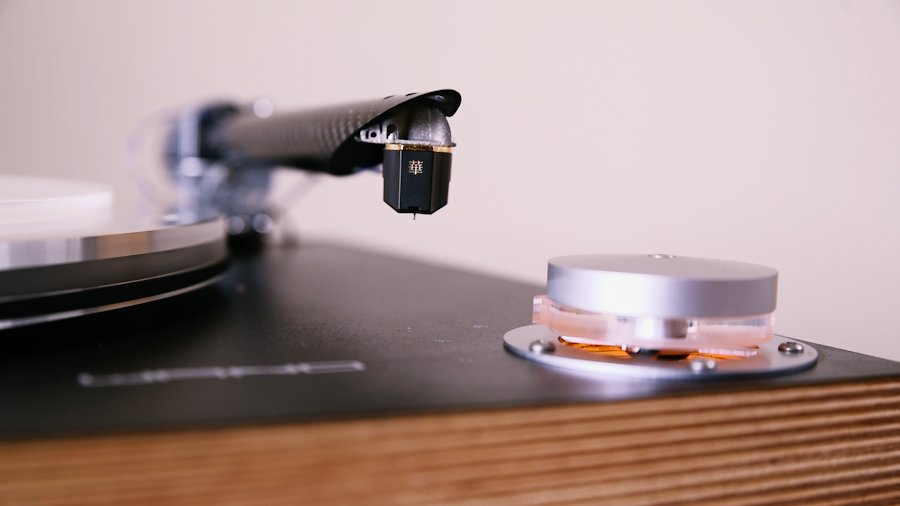 The most obvious feature is the 14 inch (360 mm) Smart Platter™. This, I am told, has 20% more inertia than a conventional platter of equivalent mass, and the 4-layer construction damps vibration and noise transfer. The bigger platter allows a bigger drive pulley to be used which gives less dynamic slip. The pulley itself has the biggest flywheel that will fit on it, to combat motor induced flutter. The Acrylic playing surface transfers vibration from a playing record allowing increased resolution. According to Simon Brown, the Aluminium-Acrylic sandwich produces an acoustically inert unit which resists the transfer of vibration from the belt to the pickup stylus. The screw-down clamp with Acrylic surface usefully allows the record label to be seen during playing. The platter bearing is designed with a focus on not generating or transmitting noise.

The substantial main body (～480 mm x 400 mm x 120 mm/～19 inch x 15 3/4 inch x 5 inch), weighing 11kg, is constructed with German Plywood with an asymmetric shape and internal machining to disperse noise and vibration. The body accommodates 9.5 inch, 10.3 inch, or 12 inch tonearms, and an optional standalone pod support for a second arm will be available. The pod is made of cast iron for vibration damping, will accomodate any arm length, and can be used with any turntable. The Baltic plywood is a good acoustic material and enables machining of a stable plinth very accurately in a single part using a computerised router. Simon Brown told me that the underside holes serve a number of purposes. They disperse and scatter vibrations while creating a difficult path for vibration from the motor mount, and they help to move the centre of gravity to the centre of suspension. And the main reason for cutting off the back corner of the plinth is to help push the centre of gravity to the same place as the centre of suspension of the three sprung feet. This is designed to be as close as possible to the stylus playing arc, as that is the stillest point of the suspension. 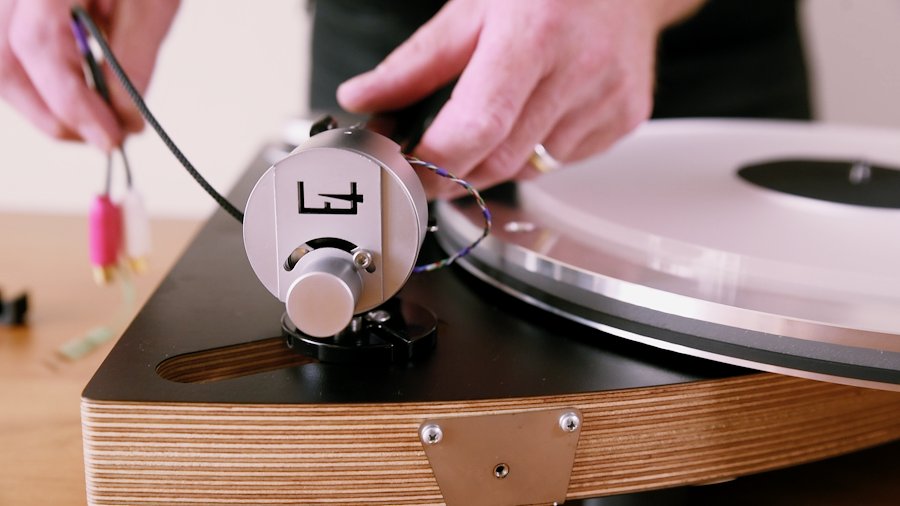 Design Build Listen claim that the Swiss custom-made flat belt designed for low stretch provides dynamic punch while maintaining noise isolation. The Wand Turntable comes with a stylish Acrylic lid which is mechanically not attached to the playing system, and which is designed for cueing the record to the beginning when down. It stands neatly upright on its back edge when not in use, so doesn't interfere with level or introduce vibration to the motorboard, as happens with hinged lids.

Another special feature is the adjustable footers, the Zentroidal™ three point suspension system which makes leveling so easy. The centroid of suspension, the stillest point, is close to the playing arc of the stylus to maximise rejection of shock and vibration.

The DC motor has superior electronic speed control that is switchable to 33 or 45 rpm (fixed 78 rpm is a factory set option), and electronic braking enables quick record changing. The motor has a speed servo control referencing the platter, so that variations in the belt-bearing-motor-power supply system won't affect its long term speed stability. The servo is configured to operate below the audio band, unlike many direct-drive turntables, explained Simon Brown. The inertia of the platter is used to maintain stability at audio frequencies. The laser-cut stainless steel 'labyrinth' plate doesn't let the motor rotate about its main axis, yet it can yaw in other planes. This keeps the robust drive while adding some isolation with a long path length for vibration, he added. 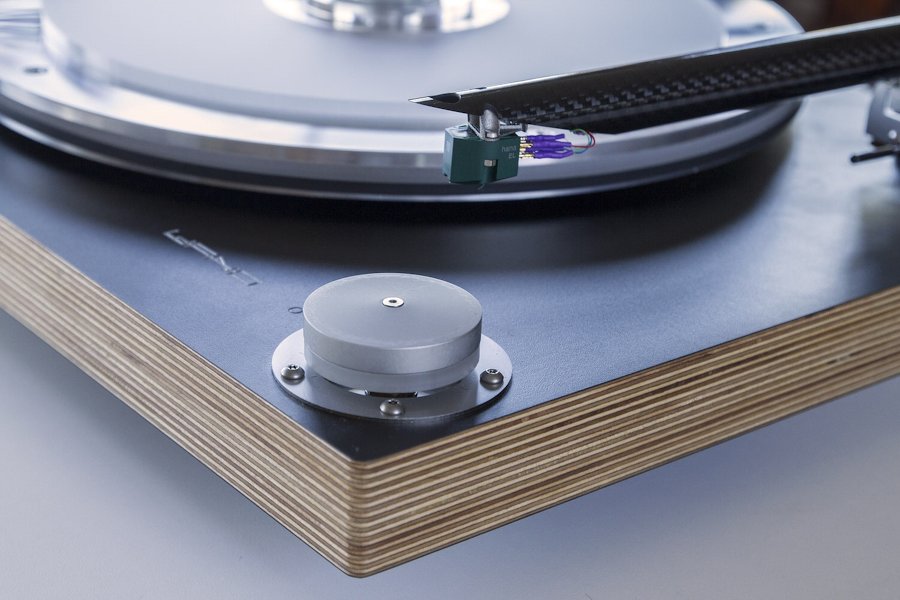 An optional on-board phono stage designed by New Zealand's PureAudio, and which is a close relative of their newly released LV-1, will be available.

So what's changed on the latest production version and since the pre-production sample I tried last year? An earth strap has been added that also provides mounting of RCA output sockets. The bearing holder has been simplified and a lock washer added. The LEDs are brighter and sheet-metal has been modified to give brighter and more even light on the controls. A bushing has been added to the speed switch to improve it's feel (by reducing 'slop'). Neoprene damping has been added between the aluminium and acrylic layers of the record clamp and under the clamp. A small vibration noise damping disc has been attached to the motor housing. The platter is now machined as an assembly to improve flatness. The Wand Turntable will be supplied set up, requiring only the mounting of the arm on it's spindle, and the cartridge on the arm. 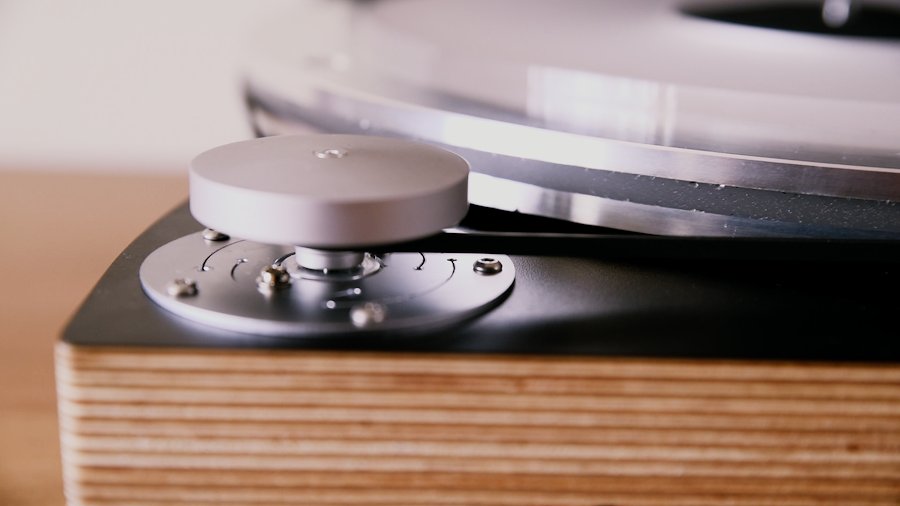 As I write this, I'm enjoying playing records on this turntable very much. I've now got an audibly higher level of sound quality from my records. I sense excellent timbre, clarity, dynamics handling, weight, and depth and space in the sound stage reproduction. Defects that are quite obvious on my previous turntables, such as susceptibility to footfalls, surface noise emphasis, and end of side distortion and mistracking are clearly absent in my listening. Yes, I'm sure I've heard lots more detail on all records played. Even on albums I've played many times over 40+ years. And listening is more absorbing, with far less getting in the way of the music composition and performance, and recording production.

A really good example of what this machine does is playing the first album by Broken Home (WEA, 1980). The mix can sound a bit muddled, but from my Hana EL on The Wand Turntable there is clarity revealing detail I've not previously noticed. Very pleasing.

The artisan Wand 14-4 Turntable is cleverly conceived with a well-experienced user-designer audiophile eye on details that make performance and use that something special that is not attainable in a mass-produced product. The design and construction is expertly executed - hand-made really makes a difference in quality, and conveys that artisan feel of the impassioned craftsman. Aesthetically The Wand 14-4 Turntable reassuringly looks seriously engineered, and there are no gimmicks or cost-cutting sacrifices. This is a turntable for playing records properly. It's easy to use and stylishly conceived, both technically and aesthetically.

On the strength of my now extended familiarity with this machine, I have no hesitation in recommending it. It really is something special.

It's available from selected dealers in a dozen countries, and otherwise direct from Design Build Listen. The Wand Turntable will be demonstrated at the forthcoming High End in Munich trade fair in May. 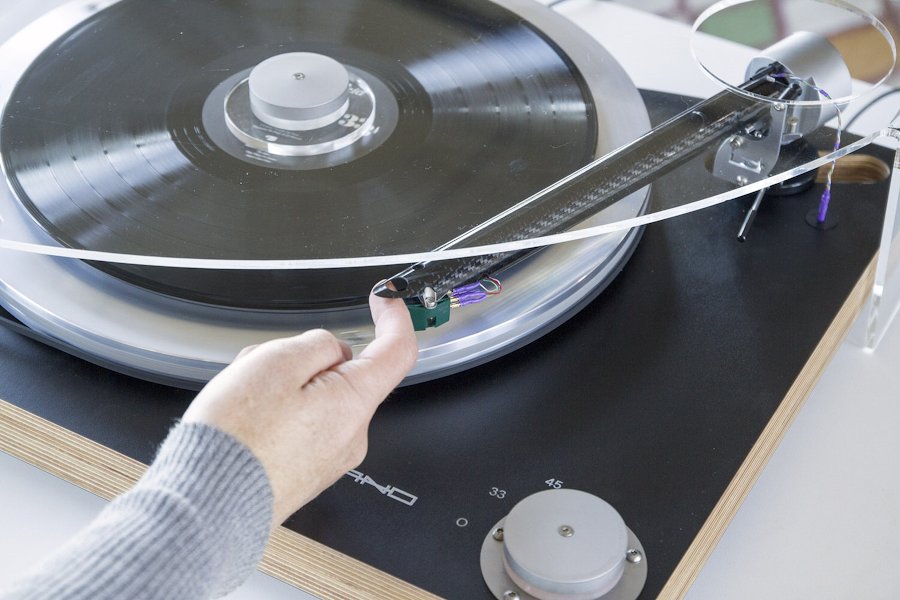