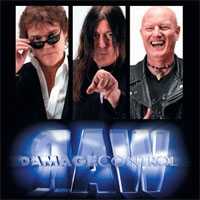 The cover of this Angel Air Records CD release announces its contents. The band stand posing in rock album cover cliches, their expressions struggling to contain their self-aware irony as they scowl, point and peer round dense shades (yes, really)! This power trio make no pretenses about what they do, they annonce it on the cover, they announce it in the opening chords and they remind you in the closing chords of the final song. To paraphrase the well known British varnish product's TV advert, Damage Control's RAW does exactly what it says on the sleeve.

Indeed, RAW is written with a reversed 'R' suggesting it is the refection of the word WAR, so it might be a punning title implying a performance style while backmasking an anti-war sentiment (like a cryptic crossword clue), released as it is in the second wave of anti war feeling since the 1960s. Or perhaps not. Producer & guitarist Robin George supports causes including music therapy (close to my heart as an Art Therapist by trade) so kudos to him there. RAW reworks an album released 2 years ago with a different vocalist and his departure prompted Robin and bassist Pete Wray (ex UFO etc) to record new vocal tracks themselves and reconstruct the album around them. Except it doesnt sound that way at all. Like all great music from early music's continuo to the latest dubstep the combination of percussion and bass lay the foundation without which all is feeble noodling. Pete Wray is a bass player first & foremost and he locks the groove with drummer Chris Slade (AC/DC, Uriah Heap, Asia) to drive this blues based rock with relentless energy and rhythm.

"RAW is the stripped down power trio Damage Control at their best. Moody & melodic, down & dirty as hell! Massive high fidelity sound, the way it's meant to be. This is perfectly polished hard rock blues. The nucleus of this power trio remains, built on mutual respect and friendship." And bult like a tank, I would add to their website mission statement. As a power trio they're half of the sextet The LovePower Band (phew, I can feel a total like 60s vibe happening here man)

Last time I wrote about Angel Air Records I was fulsome in my praise for their commitment to bring out slow burning releases and rereleases. Although they describe themselves as an unashamedly 'heritage' label this is new material. The artists may not have been describable as newcomers for a long time individually, but they got together in 2006 and here is new work from them.

This is a clever set of material by clever experienced musicians who know how to please themselves and their public. The whole cd, every song on it (and they are proper crafted songs, and this is the point), is laden with rock cliches. The songs are almost constructed from cliches cleverly used. RAW know themselves well and they know their public well too. They know that listenners who have kept buying new material from established artists are conversant with the language of rock. When such musicians use such cliches to their experienced audience they know that they are referencing the archive in their collective consciousness. The fan recognises the references and their experience of the music becomes imbued with the baggage of their own 20-30-40 years of listening, of headbanging, of crushing to the front of the stage apron.

Damage Control is not going to sell by the truckload, nor will it make anyone rich. Many might be sold from boxes at the sides of stages over the next few months (I bought discs this way only last weekend) if the band tour.

There is the expected compression applied to individual instruments and spot mics that goes with the production syntax of this genre applied moderately. Angel Air haven't blasted this recording through global compression and whacked it into the top 6dB of the CD dynamic envelope so the dynamics of each song survive the print. In other words its spot on for the product with neither audiophile pretensions nor shortcomings.

If you have spent any time whirling your sweat drenched locks until catherine wheels of droplets sparkled in the strobe of an otherwise dimly lit beer sticky rock club floor, this is an album for you. If you cannot help finger imaginary chords during guitar breaks or throw your head back and mime rock god wails as you listen to your old lps, then this album is for you. If, however, you spent the early 1980's barely moving your head to your Wham records in case your back-combed and laquered big hair fell over, then forget it; you won't like this. Basically RAW Damage Control is an album for the converted, indeed to the committed. Your familiarity with the rock syntax will be proportional to your enjoyment.

This album is an immaculately produced example of the genre. It is well written, well performed and well recorded. It holds no surprises and it breaks no new ground. If you think you might like this album you probably will.