The Future of Audio?

There are some industry moves coming on the horizon from some of the major players in music streaming. In fact, I have been writing this article for the past couple of weeks and I keep having to edit it.

For a long time, the majority of streaming was done in MP3, Ogg Vorbis or AAC, all lossy formats. Spotify, Youtube and Apple reigned supreme.

Tidal, Deezer and Qobuz, all smaller streaming companies, made a big move and offered lossless, both CD Quality (16bit/44.1kHz) and also some at higher sample rates.

But these all remained smaller companies, a niche in the market. I tried Tidal and eventually moved to Qobuz as I felt it offered a better app and a more complete library for my musical tastes.

Then Amazon launched Amazon Music HD in September of 2019. In truth, they made a bit of a hash of it. Out of the gate, their Windows client could not output music as a bit perfect stream. I could not even confirm whether that has been fixed yet. However, Amazon does have a respectable number of hardware manufacturers on board already, including probably the largest in Bose, Sonos and Bluesound/NAD.

But it did shake things up - would Amazon kill the competition? The Roon forum was awash with both demands to have it as an option on the platform and real concern that the smaller services would disappear. Neither happened.

Lucio recently announced the launch of Deezer's HiFi Room Concept only last month. But this was just a taster. 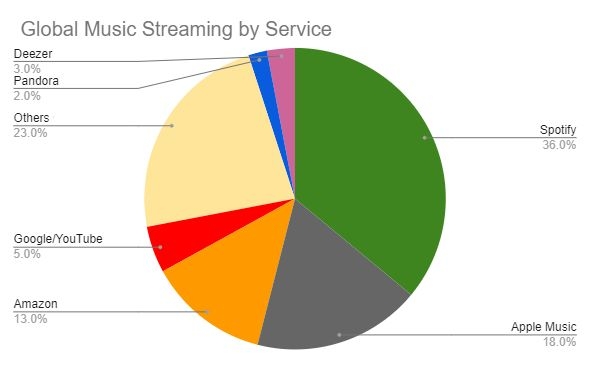 Next up is Spotify. For some time, they have been the largest player in the market. 36% of all streamed music worldwide is via Spotify. I get why people like it. My wife uses it. I occasionally use it. The apps are well thought out, the discovery is excellent, but I have always found that a maximum of 320kps Ogg Vorbis was not quite good enough for critical listening.

Fast forward to February 2021, Spotify announced that they will be introducing Spotify HiFi. Details are scarce, but the rumors are that it will be limited to CD quality and would be $20 per month in the US (I am using US prices here for simplicity, prices are available at each provider's website). The release date was later this year in limited markets. A significant step forward for global music quality. See the news release here

If Spotify is the 300lb gorilla in the room, they aren't the only one. The other gorilla is Apple, who are second in the market with an 18% share. Announced on May 17th, 2021, they will be offering Apple Lossless at no extra charge for Apple Music listeners, only $10 per month, half of the rumoured price for Spotify. It may be as a direct response to Spotify, it may be part of a bigger plan as it looks like it will be tied to new hardware to utilize this new quality of music stream. See the original source here

This will not only be CD quality, but also include higher resolution and Spatial Audio with support for Dolby Atmos. This is where the hardware tie-in is expected, that it will be automatically integrated if listening through Apple's own Airpods, or Beats (owned by Apple) headphones with either an H1 or a W1 chip.

This news was barely off the press when Amazon responded - they dropped their existing HD tier of Amazon Music Unlimited down to $9.99, making them the first company to actually provide lossless streaming for less than $10. It is, in fact, available already. And it is only $7.99 if you are a Prime member. And who isn't?

So in the course of a couple of years, we will have gone from only a handful of small (sorry, Tidal, Deezer and Qobuz) options offering CD quality or better, to most people streaming music having the option of using it. We are finally reaching parity with decades old technology.

What does this mean? I am hoping that it does not mean the end for Tidal, Qobuz and Deezer. But the sad truth is that it might. However, they cater for a much smaller market, the audiophiles, and may yet offer some unique offerings with the Hi-Res, MQA (Master Quality Authenticated) and even DSD options.

The truth is, it is still a little difficult to get the music into a decent HiFi. Unless someone starts offering better streaming protocol options than UPnP, HEOS (Denon/Marantz), MusicCast (Yamaha), Chromecast (Google) and Airplay 2 (Apple), there will still be some issues. Some have poor apps, some are limited in quality, some do not offer gapless playback.

Roon have tried to use their RAAT protocol to set them apart, having partnered with Tidal and Qobuz. They have done so with some success and you see a lot of the major HiFi hardware manufacturers starting to support it. They even offer both ROCK (their own dedicated fork of Linux) and Roon Bridge offerings for free to the DIY market.

Spotify Connect, however, has further reach and a great potential to deliver lossless HiFi streaming to everyone. Nearly every streamer now released supports Spotify out of the box and it works perfectly with their app.

Tidal have launched their version, originally called Tidal Connect, in an attempt to catch up. Google could do some minor work and make Chromecast a viable alternative if they can fix gapless playback.

Then there is Apple. Will they take Airplay to the next level? Because if anyone can, they can.

But is it Really Lossless?

Here is the interesting thing. These manufacturers are all betting on mobile consumption of music, both on phones and headphones. Android, the most popular mobile OS in the world, limits you to 24bit, 48kHz streaming, so the higher resolutions are worthless. In iOS, Apple is supposedly likewise limiting you to the same rate, though external equipment will be able to utilize the higher resolutions.

Apple, however, removed the headphone jack on all but a few of their products, so you either need to use an external DAC or Bluetooth. Android phone manufacturers followed suit, but at least they standardized on USB-C, rather than Apple's proprietary connector. I am feeling rather smug about my purchase of a 2019 standard iPad now with its very capable internal DAC and headphone output.

But how will the masses consume this lossless music? Ironically, via Bluetooth, a lossy codec. CD quality streaming, the minimum that I feel can be considered lossless/HiFi, uses 1411kps of data at 44.1kHz/16bit. Apple uses AAC transcoding, maxing out at 256kbps. To put that into perspective, MiniDiscs (remember them?) could do 292kbps.

Android at least (mostly) offers Qualcom's aptX codec (48kHz/16-bit) at 352kbps, while aptX HD (48kHz/24-bit) tops out at 576kbps. Newer Android phones can also use Sony's LDAC codec, topping out at 990kpbs, but is an adaptive, variable bit rate offering that uses battery quickly and is limited in support with headphone manufacturers. Yet it still only offers 70% of the bitrate that CD players released in the 80's were using.

And then there is the receiver chip in the headphones themselves. They have to support the higher tier codecs. My own Sony WH-1000XM2 headphones allow me to use aptX and LDAC and sound very good, but they are in no means a replacement for good wired headphones with a good DAC using standard Redbook CD quality music at 1411kbps. Or even with vinyl on a good turntable (just for you Lucio!)

Do not be fooled by so-called 'Hi-Res' or 'HD' stickers on Bluetooth products. It's actually 'Higher Res' than MP3. It is still lossy, still a compromise. It is not regulated like video standards, this is the wild west of marketing.

What does this mean for the average music consumer? They may be able to stream lossless music, but they may very likely have no way to utilize the greater resolution that is on offer. There is the element of smoke and mirrors and I have already read naysayers proclaiming that nobody can tell the difference between 256kbps and 1411kbps anyway, that it is all a con. And through an Amazon Echo, maybe through a pair of Apple Airpods, they might be right.

However, moving the quality forward is in the interest of all - if you start with a better source, eventually, someone will find the way to get a better quality stream to the headphones wirelessly. Maybe the add on DAC, powered by the phone, will become more commonplace. I am waiting to see Apple adding a second WiFi chip to phones and using a local version of Airplay with their products. Spotify might partner with companies to offer a Spotify Connect style codec for headphones.

I see the next year involving a lot of firmware updates from manufacturers not wanting to be left behind. I also see tech giants making mistakes - like Amazon failing to understand the importance of bit perfect streams on Windows and Apple making their MacOS manually switch between bitrates.

I also see that, for the true Audiophiles, the battle will now be won on the hardware front. Streamers from Bluesound, Cambridge Audio and a host of other companies will all scramble to add on the newest, latest option that the big companies release. Savvy audiophiles will look to things like Raspberry Pi's that can stream multiple sources losslessly to a USB DAC and still get their losless content.

I hope that it doesn't see the end of companies like Tidal, Qobuz, Deezer and Roon. These companies understand us weirdo audiophiles. But change is coming fast and I am hoping that the real loser isn't the artist who is getting their cut squeezed tighter and tighter in the race to $10 per month. If you like small, independent, non mainstream artists, support them, either buy the CD, buy the download or use the money you save to go and see them live or buy their merchandise.

Who knows where this will end, maybe this time next year I will be stealing my wife's Spotify account and be streaming through a Bluesound Node.