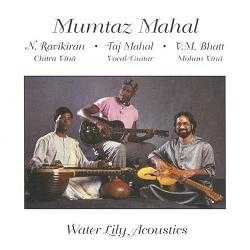 In case I have not been explicitly clear in my past ramblings, I think the world of the recordings by Water Lily Acoustics, please read the previous articles linked below.

Since this album is a fusion of the Blues and Indian classical, it would make sense to introduce the artists from the perspective of their genres.

In the ‘Blues’ corner we have the venerable Taj Mahal. There is little introduction needed to this accomplished icon of the Blues genre. He has been playing for more than forty years, and listing the twenty odd instruments he can play or the scores of musicians he has collaborated with would take up more room than I have intended for this entire article. But, if I may be so presumptuous as to give him a title, it would be ‘Blues Ambassador’, because he has fused that genre with so many others from around the world.

The Indian Classical camp is represented Vishwa Mohan Bhatt on his self-designed Mohan Vina (a sitar – slide guitar hybrid) and Narendra Ravikiran on the Chitra Vina (a fretless slide instrument from India). Both of these musicians have a familial and musical heritage tracing back to the origins of their genre.

If Water Lily recordings are a treat, then their liner notes would rate as ‘a cherry on top’. Kavi certainly compiles among the best liner notes in the business, I (almost) seriously feel that this in itself should be a category at the Grammies, and Kavi would probably win for every album he has produced. Liner notes may seem trivial to some, but I feel cheated when they are inadequate. I must give proper credit to Kavi when for taking the requisite amount of trouble to give us an introduction to the artists, genre/s and music that is deserved. These musicians are masters of their art, and have dedicated their lives to furthering a great human accomplishment, an accomplishment that has taken many generations to bring to its current state and is as rich and complex as any of the real achievements of our species. Simply listing the musicians, tracks and dates does not cut it for me, thanks Kavi.

I can still vividly remember the first time I listened to this album, matter of fact it was the first time I had every heard a Water Lily production. It was in my brother-in-law’s newly renovated basement, where he was showing me his third system that he had pieced together with components he had left over from previous setups. He put in this album, and almost instantly I tuned him out (sorry Orlando), but only because I was so taken by the music and the sonics. It was not long after I picked up a copy of the album for myself.

Rick Bayless recently made a clever mention of the thin line separating ‘fusion from confusion’. Till I had heard this album, I was decidedly against music produced by fusion of genres, because to my ears it had all sounded like confusion so far. What I found amazing about this production, was that the result actually sounds like it belongs to a well worn composition from an established genre. I simply heard good music, and not a bunch of musicians fumbling about trying to discover the correct collaboration at the expense of my time and dime..I am not sure the waste of which of those two would irritate me more.

From my conversations with Kavi Alexander, I know that he does not play a part in writing or arranging the music. But there seems to be a consistent quality in all of the fusion works from WaterLily that I have listened to. That same sense of oneness, harmony and compliment between the genres and musicians are evident. I am puzzled as to how this consistency is achieved, my guess is that the answer lies in the types of artists that Kavi seeks out or is sought by. At a higher level, I suspect there is an artistic and philosophical kinderedness between all involved on a WaterLily album, and it shows in the music.

Back in my brother-in-law’s basement…after succumbing to the music I noticed something else, the sonic quality of this recording. Specifically; the naturalness of timbres and the seemingly effortless dynamics. Later on when I got my own copy and spent more time with the album I also noticed the seemingly infinite detail, especially obvious on the decaying notes played on the mohan vina.

For those of you who rate musical experiences in terms of goose bump occurrences, I find it nearly impossible to not have one whenever I hear Taj Mahal belt out his shouts at the beginning of “Coming of the Mandinka”. For those of you that have read my reviews may recognize the many times I have used this passage as a test for tonality of male vocals and macro-dynamics. This album immediately made my short list of material for frequent personal listening and reviewing, and it has remained in that list ever since.

My interview with Kavi Alexander.
My review of the "Saltanah" album
Taj Mahal
Vishva Mohan Bhatt