40 Years On and the Man Who Changed the World. 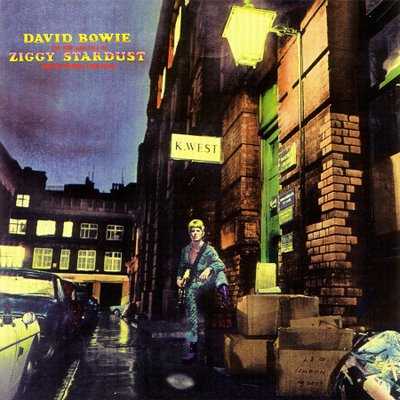 You've got to use your imagination here

It's 1978. I'm 18. Tall, slim and blond (right now I only get one out of three). My last year of school before going off to university and I'm on the traditional narrowboat trip that those leaving the 6th-form take during an 'activity week' after the exams. It's sunny and calm – I'm surrounded by my friends, it's about as good as it gets.

Except for one disturbing aspect – on the narrowboat are two 16 year-old girls who blagged the last two places not filled by us more mature students. One has long been scooped up by a friend of mine, but the other – pretty and sharp – has so far resisted all my attempts at chatting up.

But help is at hand in the shape of my trusty cassette recorder and a certain androgynous Englishman called David Bowie...

These remember were the dark days, when all but the exceedingly rich teenager could afford was a handful of recordings, and to my eternal credit one of the four tapes I had with me was Ziggy Stardust and the Spiders From Mars. Like a moth to a flame that 16 year-old was drawn to the sound of that cassette recorder (you obviously had to be close to hear it!) and without effort we were sharing our enthusiasm for perhaps the greatest solo artist to have come from the UK.

Now we move on 34 years and I'm sad to say that I have neither the cassette player, or the old cassette of 'Ziggy'. But one out of three isn't always bad as I still have that 16-year-old...

But why - you ask – is Geoff whittering on about teenage angst on a hi-fi site? - Because as any Bowie fan will tell you, it is now 40 years since Ziggy first came out (*) and I thought there was no better time to do a short retrospective on what surely counts as one of the 10 greatest rock albums of all time.

It doesn't take much effort to find out Bowies biog on the net, but for a fan like me you have to have the records that chart his transformation from a sub – Dylan/Newly singer of folk ballads (admittedly some decidedly quirky and even disturbing) in his 'London Boys' phase complete with cockney accent, to the brief success of the sublime (especially in retrospect) Space Oddity and then on to something completely different – the hard-rocking edgy artist of 'The Man Who Sold the World'.

This album, never a big hit at the time , showed that Bowie could pull on a new suit and utterly transform himself – something he would continue to do throughout his career – both visually and musically.

Though the influence of many – the Beatles in particular – was always there this album already showed a bravery in almost deliberately discarding all that had gone before, including many fans, as Bowie launched into his new persona.

The next Album in contrast was almost a step back to the 'Oddity' days, as if to reassure his old fans (relatively few though they were) that he could still spin a web of melody and sensuality, the achingly beautiful 'Life on Mars' could have come from Space Oddity and yet Bowie was exploring and pushing his extraordinary voice to new heights and range. And of course to go with the new album was that image, Bowie as a beautiful young girl – or not?

So having dropped into the safe zone between Oddity and TMWSTW no-one expected what came next. The pretty young thing turned to an almost alien, sexless yet oversexed, emaciated yet powerful creation 'Ziggy Stardust', powdered and painted yet unlike any Pierrot, a intergalactic whore complete with (at the time) sensational bisexuality.

And of course like Olivier's King Lear it was all a construction, a fabrication of a genius designed to shock and expose and to be noticed! Where a few years later the Sex-Pistols became notorious by being 'bad' – Bowie did it by being as different as it was possible to be, and of course we all know how successful it was. In many ways that image was more successful than the actual music as Bowie became an international superstar without really the record sales to back it up (it peaked at no.75 in the USA).

Now that is a dangerous combination, because it instantly gives both the artist and the public the idea that the image – the ephemera around an artist – is more important than the music itself. And perhaps this success led Bowie to continue in a series of metamorphosis from character to character - a 'Cracked Actor' - through the next two decades.

Which would (as in the case of some artists) be fair criticism, if it were not for the fact that in 'Ziggy' Bowie had not just created a new, and commercially successful doppleganger, but an album of towering ability and range.

The album, as was the fashion then, tried to tell a story – one of many 'concept' albums. But where most of the genre fail dismally, here Bowie uses it to create a seamless whole from a series, or should it be 'cycle' of great songs. The tale of the superstar alien falling to Earth - 'If we can sparkle will he land tonight' – the rise and fall (of course) - “When the kids had killed the man I had to break up the band” - and aftermath.

For once this isn't a record review as such – I'm not going to do track listing or talk about the air behind the drumkit because to do so would be to dissect the music, and when you dissect something you kill it stone dead – there are others who will make a better job of the butchery.

No all I want to do is to get you to buy this disc. Put it on and wonder (preferably in a darkened room). DO NOT buy anything with bonus tracks. DO NOT buy anything remastered, or remixed or otherwise buggered about with by some teenager who equates trebel volume with fidelity. If you possibly can buy it on vinyl so that you will have a pause mid-way to catch your breath – if you have the misfortune to have it on CD (and some of the CD pressings are truly apalling) then please have the good grace to listen to 'It ain't easy' and hit 'pause' for 30 seconds before launching into 'Lady Stardust', otherwise the wrench of the change of style and tempo will kill the flow that that break makes natural – I cannot imagine that but Bowie – the legendary control freak – wanted it that way.

And after you have wondered at the range and power of that voice, the guitar of Mick Ronson which almost defines 'soaring' and spotted the tracks that other lesser talents made into careers, you will, I hope see why celebrating the 40th anniversary of this album is so important.

Every collection of music should have this – sure, I understand if it's not to your taste, no great music appeals to everyone after all – but few will hate it and no-one can deny it's importance, not least in the career of Bowie who continued to produce great and original recordings (a phrase I use very sparingly), and different persona for the next 30 years.

At a time when one of the great artists and live performers of the 20th century is in poor health let's all raise a glass to his finest hour – or at least one of them...