If you answered a, b, c, d, e, or f, please go sit with your face to the wall. You are wrong! If, however, you answered "it should be (g), none of the above," then you get a trophy! Yes, it's a trick question. None of the offered answers is correct.

I hasten to add, as I see the tars and feathers, boiling oils, and pitchforks and torches rushing my way, the reason is that sonically good recordings have been released in every format (OK, maybe not 8-track!), and so have bad ones. We all tend to get wound up in cheerleading for our favorite formats, but if being totally honest we must admit, just because a bad-sounding record is in your favored format doesn't mean it abruptly becomes a good-sounding record. Similarly, a fine-sounding recording doesn't lose its quality just because it was released in a format you don't prefer. 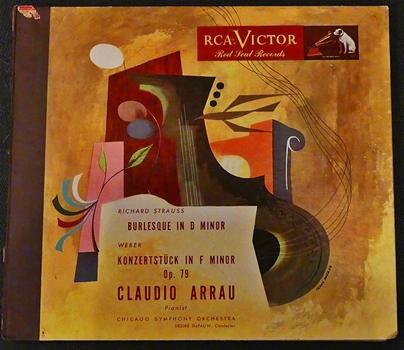 I had an experience last night that served as a useful reminder of these sometimes ignored truths. As I often do, let me beg your forebearance while I start with some background.

Occasionally I buy records via the Internet from a dealer on the opposite US coast, and most recently I relieved him of five 78 RPM classical sets ranging in date from 1927, at the dawn of electric recording, to 1947, just before the advent of the LP put rapid end to the nearly half-century reign of the format. The others need not detain us, at least in the present article, but I will single out one for discussion: the latest-issued set, featuring Claudio Arrau, then at the outset of his distinguished career, with the Chicago Symphony Orchestra under outgoing music director Desire Defauw (who four years earlier had succeeded to the post upon the death of long-time incumbent Frederick Stock) in the Burleske for piano and orchestra by Richard Strauss and the Konzertstuck of Carl Maria von Weber. I bought it not only because I thought hearing some early Arau would be interesting but also because in my experience those late, post-World War II Victor issues sometimes offer sound quality and surfaces at the very peak of what was achieved during the 78 era.

I had great expectations, then, for this set's sonics. Nonetheless, it was the last to which I turned, and, as you'll have guessed, last night was its turn for an initial whirl. As you also will have guessed, my high sonic hopes proved unfounded. No matter the combination of recording curve and stylus or cartridge, the records sounded terrible--fuzzy, distorted, tonally wan; with the curve settings I would have expected, they were quite strident, too, and the piano sounded brittle, hard, and sometimes recessed. 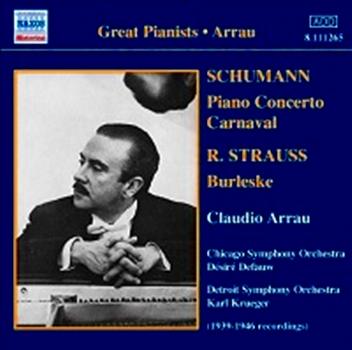 Those who have read my musings here before doubtless will have formed a firm impression that I love to advocate for 78s having grossly underappreciated sonic potential. You can imagine, then, my bitter disappointment when I was unable to coax even tolerable sound out of my Arrau set. You also will not be surprised that I had my suspicions of what might be the cause and that I lost little time in starting to research them. Sure enough, I had it nailed: Victor did not issue these records in their original, direct-to-disk form. Instead, it dubbed them, making them what we collectors sometimes call "recuts." Recut sides were a fact of life during the 78 era, before tape, when a single side going wrong during the manufacturing process would delay or kill an entire set. Accordingly, at each recording session the companies would record a lacquer "safety" copy from which they could dub replacements should a mishap befall one or more of the sides. In addition to rendering a master a generation removed from the original, the process yielded fidelity limited to what phono pickups of the day could deliver. Usually, one or at most two sides might be recut, and they tend to stand out from their album mates by having noticeably worse fidelity. The Arrau set, however, apparently was not an example of replacing a side lost in processing; instead, I gather all the sides were recut to add "brilliance"--read, to bump up the treble and reduce the bass. The results were ghastly.

These records have been reissued on Naxos Historical in transfers by Mark Obert-Thorn, one of the most respected practitioners of the art of historical recording transfer. I don't own the CDs, but I've heard short excerpts from the Chandos website, and I must say my hat is off to him; how he managed to take these sonic sow's ears and, on the strength of the excerpts, turn them into well-tanned pigskin purses I can't imagine. Certainly, he has skill and equipment far in advance of mine. The fact remains, though, that even in his capable hands close listening reveals that the original recordings simply were poor. That's a painful admission for a 78 booster to make, but also a salutary one.

Moral: the next time you find yourself being drawn into one of those tedious "analogue is inherently better than digital" (or vice-versa) arguments, stop and take a breath. This avid collector of historical recordings is forced to admit sometimes an old record is a musical treasure chest, but sometimes an old record is--just an old record. That being the case, those of us who dwell in the world of modern recordings surely can embrace that new is not always better than old, and those who hew to one side or the other of the digital divide can surely concede the opposite camp is not always without virtue. Let's not fixate on formats; in the end, the test is whether a recording is good enough to give the listener pleasure, or at least a decent idea of how a performance sounded when fixed in a medium.