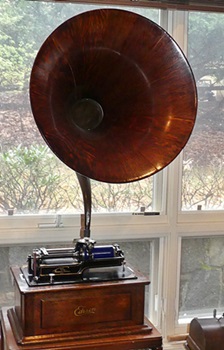 Remember when "going viral" just meant something had become an (often annoying) Internet fad? As the whole world now knows, that bit of pop slang has taken on a much more sinister meaning of late. Entire cities or even states are shut down, the stock market is plummeting, routine basic necessities have disappeared from supermarket shelves, travel has ground to a halt for leisure and business alike, and "social distancing" and "self-quarantine" have become the order of the day, all because of a virus with the curious scientific name COVID-19 and the popular name coronavirus. Suddenly a world in which people are accustomed to congregating to do their daily business or to enjoy society, one becoming ever more expansive and interconnected, has become a world of isolation, of single individuals keeping well away from their fellows as much as possible and avoiding what were their habitual daily activities as recently as a month ago. Not to mention buying toilet paper in boxcar lots.

Naturally, all this anti-togetherness demands its practitioners find alternative ways to occupy their time in the privacy of their own homes. For many, I'm sure that means forsaking modern distractions and returning to the time-honored, simple, homely pastimes beloved of our forebears. We'll find out to what extent that's true in about nine months. Meanwhile, I'm no different from anyone else in abruptly finding myself left to my own devices, and among those devices, for me, the most obvious choice for entertainment is my Edison cylinder phonograph, just as I'm sure it must be for most others around the globe. Mine is an Edison Triumph Model B with 2 minute/4 minute conversion kit, seen in the photo to the right, and as I'm sure most TNT readers would agree from their own experience with these mechanical marvels, it's a proven source of solace, a musical companion tried and true. When the chips are down, depend on your Edison, that's what I say, echoing the sentiments of what must be a multitude of fellow devotees in TNT's worldwide readership.

Well, maybe "multitude" is a little bit of an exaggeration. "Legions" might be a better estimate. Legions of fellow devotees.

Unfortunately, despite those brave words about depending on an Edison, my Triumph has proven to be a finicky beast with an annoying habit: I've had it to skilled service technicians repeatedly for this or that problem, and each time they've gotten it up and running and seemingly fixed, only to have it develop some new peculiar issue shortly after I return it home. The most recent was a malfunction of the carriage feed mechanism. Briefly, as regular readers of this column may recall, Edison's cylinder phonographs (and his disc machines, for that matter) do not rely on the record groove to propel the stylus across its surface, as a modern turntable with a pivoted tonearm does. Instead, they work like a modern linear tracking model--and, in fact, the cylinder machines are linear tracking devices--with a mechanical feed mechanism driving the reproducer across the record and the stylus floating in the groove, doing no more work than to reproduce the modulations that make up its musical content. In the Triumph, the arrangement is as follows: the reproducer is fixed in a carrier attached to one end of a tube that slides on a rod parallel the cylinder's axis. At the other end of the tube, a little arm sticks out and engages with a "feed screw," a long rotating rod with threads that drive the sliding tube to the right at the same rate as the record's groove advances across the record surface. Alas, with its usual exquisite sense of timing, my Triumph chose a few days ago, right in the middle of a virus-defying cylinder listening binge, to malfunction yet again; rather than driving the reproducer across the cylinder, the mechanism just sat there making clicking sounds, like this:

Now, with the public health situation being what it is, there was no way I'd be able to take the machine to one of my technicians for troubleshooting; instead, my choices were either to wait until the virus runs its course, weeks or months from now, or else to resort to self-help. Reluctantly concluding that the latter was the only really viable choice, I posted a plea for advice on an online forum to which I subscribe, and a short time later I got the solution to the problem. Surprisingly, the culprit was quite possibly the smallest bit of metal in the machine other than some of its screws: the half nut. "No," someone mumbles, "the problem is the guy who owns the thing, and there's no 'half' about his nuttiness!"

I'll pretend I didn't hear that. 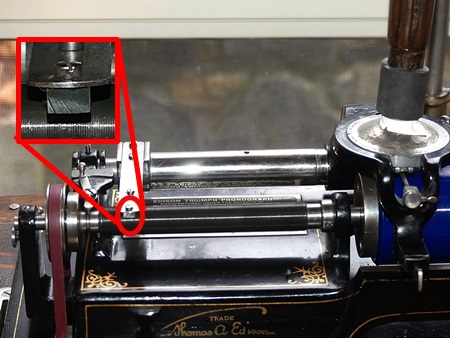 Remember that little arm I mentioned that sticks out to engage the feed screw? At the tip of the arm is a little metal piece called the half nut, and it's the part that does all the work of propelling the carriage across the record. See the photo to the left for an illustration. As the name implies, it's like the kind of nut that goes with a bolt, only cut in half to leave a block with a U-shaped, threaded indentation and set with the threads facing downward. These are of the same pitch as the threads of the feed screw, and when lowered onto the feed screw they engage its threads and proceed to travel along it in the same way a full nut would travel down a matching bolt turned by a screwdriver.

Or, more properly, they engage the feed screw's threads if the half nut is installed the right way 'round. If it's installed backwards, the half nut's threads will run at an angle across those of the feed screw instead of firmly engaging them, and while the contact may suffice to drive the carriage for a while, it isn't secure or dependable. Eventually, it will stop working. Instead of moving across the cylinder, the carriage will stall, and the mechanism will just make annoying clicks.

Do those symptoms sound familiar?

My advisor indicated if gentle pressure will move the carriage easily to the left when it is in playing position, the half nut is installed backwards. Having determined that my Triumph showed precisely this tendency, I bucked up my courage, got out a little screwdriver, and proceeded to reverse the half nut. In the process a miracle happened: I managed to remove and then replace the tiny screws securing it without dropping and losing one. After the process, another miracle happened: the clicks went away, the carriage resumed moving as designed, and music once again flowed from the bell of my oak Musicmaster cygnet horn. I had learned a useful lesson in phonograph repair, and virus-induced boredom once again was held at bay.

OK, if you've made it this far and the foregoing served as a brief distraction from our common plight, maybe even brought a wan smile or two, it served its purpose. That said, my weak efforts at humor notwithstanding, I know this pandemic is a catastrophe, disrupting lives at best and ending them at worst, and nowhere has the crisis been worse than in our editor's home country of Italy. Please, everyone, be safe, don't take unnecessary risks, and stay healthy. Follow the guidelines laid down by the authorities and remember that we're every one of us, no matter where we live, in this thing together. I hope that you all find comfort in our mutual love of music and audio paraphernalia, of whatever vintage. (And that you all find toilet paper in your local store before your stock at home runs out!) All the best to every one of TNT's family of readers.