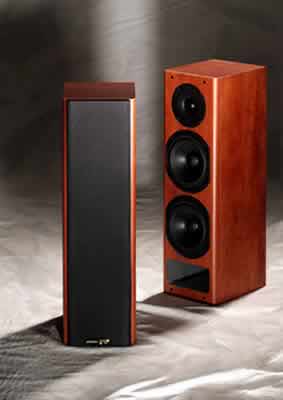 Throughout my years of involvement with hi-fi gear, some products just stand out. Revox turntables, the first (and second) Phase Linear tuners, the original GAS Ampzilla amp, the Nakamichi 1000 cassette deck, these are all products that made an impression on me when I was young. Another product that I remember fondly was the original IMF Monitor, from England. They were really special, sounded fantastic, and were my first exposure to a transmission line loudspeaker. I have never owned a transmission line. Nor have I ever had the opportunity for any type of long term listening to transmission lines. Late last year, I received an e-mail from Sven Voelk, of Interlink Audio, located in New York City. He was in the process of setting up U.S. distribution of a line of transmission line loudspeakers. I was intrigued, and accepted his offer of a review pair. A few weeks later, they were delivered to my front door.

Newtronics of Germany has been manufacturing speakers since 1973. Their current line ranges from the entry level Gate, under review, to the $30,000 per pair Megas. All Newtronics speakers sold in the United States are covered by a 10 year manufacturer's limited warranty. The warranty elsewhere in the world is 3 years.

Described by the manufacturer as a "2.5" way speaker, the relatively compact Newtronics Gates measure 6 5/16" wide by 21 11/16" tall and are 8 3/4" deep. They are very solidly built, and weigh approximately 16 pounds each. Fit and finish are quite good. Around back are high quality gold plated binding posts.

On the front baffle are two 5" drivers, used, roughly as a woofer and midrange. Mounted just above them is a 1 1/4" soft dome tweeter. These drivers should exhibit excellent durability over time, even in humid climates, due to their rubber surrounds. Below the woofer is the output of the transmission line. I find the "2.5 way" designation to be rather puzzling, as the output of the transmission line almost sounds like a whole additional driver, and each of the larger drivers seems to roughly cover independent frequencies as well. (I really hesitate to call them "woofers", due to their diminutive size.) The point is really moot: the drivers and transmission line output are so close as to really create a "point source" design. Inside the enclosure is a very simple crossover. Theoretically, the Gates should mate well with a wide variety of amplifiers.

As far as specifications, they are rated at 40-20000 Hz, with no tolerance given. They actually will do 40Hz; I checked them with a test CD. They have a rated sensitivity of 89 db, and a power handling rating of 100 watts continuous. They are rated at 4 ohms. The review sample was provided in the optional dark Alder finish, which I found to be quite attractive. The standard finish is matte black. Germans in general have a reputation for fine craftsmanship, and the Newtronics Gates are no exception to the rule.

I tried the speakers in a few different places in my listening room, but not surprisingly, I settled on the same placement as that for my Infinity Kappa 6.1's. They were placed on the long wall of my 14' by 20' listening room, approximately 2 feet from the rear wall, and well away from the side walls. They were placed approximately 8' apart, with no toe in. I placed them atop 30" speaker stands, which had the tweeters just a bit above ear level when in my listening chair. They were possibly just a tad too high, but the extra height afforded by the stands added to the height of the image portrayed by the speakers during listening, which I liked.

I did try the Gates with my Jolida JD-502B tube integrated amp, but I really didn't like the combination. Bass response lost its tautness when the Jolida was in the system, and there seemed to be a lack of focus as well. The Gates seem really need the extra control attained by using solid-state amplification. The Gates may mate well with other vacuum tube amplifiers; unfortunately, I didn't have one on hand for review. I did most of my listening with my Audio Research SP-9 preamp mated to my McIntosh MC-162 power amp.

The review pair had been broken in before they were shipped to me. The distributor is currently in the process of setting up a dealer network in the United States, and the review pair had been used for demonstrations to interest new dealers. Because of this, I have no idea what they sound like before break in or how long the break in period lasts.

Upon first listening to the Gates, I immediately felt comfortable with them, although it took a fair amount of time to figure out why. It turns out that the Gates are voiced (at least from the midrange up) very closely to my Infinity Kappa 6.1's. Sure, there are some differences; the Gates are voiced more to the middle of the hall (and reproduce more hall ambience), where the Infinitys are more "front row". But tonally, from the midrange up, they are very close indeed. I really enjoyed the Gates with softer classical and acoustic music. One of my favorite classical LPs is Zubin Mehta conducting the Israel Philharmonic Orchestra performing Vivaldi's "Four Seasons" (Deutsche Grammophon 2741 026.) The Gates did the recording justice, it sounded very open, airy, and natural.

Due, I believe, to the small size of the drivers, the Gates were also an extremely nimble performer, able to keep pace with even the most demanding recordings. Pink Floyd's "The Wall" (Columbia CD C2K68519) came across very believable. Most of the time, I forgot I was listening to such a compact speaker, and just enjoyed the music. The Gate had no problem at all with wide, fast dynamic range swings.

With acoustic or classical music, I really liked them. If I only listened to "softer" music, I might even consider purchasing a pair. However, my musical tastes are all over the map, and with rock music, sometimes I found them wanting.

I have a problem getting a hand on the bass capabilities of the Gate. This really became an issue while listening to rock or reggae. Sometimes, the amount of bass, and its depth, would be fine, other times, I longed for a subwoofer. I thought I had it down to the recording: some sounded fantastic, some, well, didn't. Then, things got really strange: my wife was out of the house on Saturday evening, and I was in the mood to rock.
So I was off to the closet where I keep my LPs and CDs stored, and pulled out the excellent Classic Records reissue of Led Zeppelin III. (Classic Records SD-7201) For some reason, this is probably my favorite Zeppelin album, and I know it intimately. So, down went the arm, up went the volume, as "The Immigrant Song" let loose. "Here we go again", I thought, could use a bit more "drive", more brute force in the bass. But then, later on the same side, John Paul Jones' excellent bass playing on "Friends" really came through well, as did the drum work of the Late Great John Bonham. Now, I'm really confused. Sometimes, it's great, and sometimes it's not. Got to be the recording, right? But then, the same LP can be great, or not. What could it be?

I have come to three conclusions: first, it wasn't really a fair test. My room is much too large for these speakers. (I did think about moving my reference system to another room, but thought better of it before I tore everything down.) Considering the size of my listening room, they really did do a commendable job. Second, they may not be the speaker for rock music. Jazz, classical, folk, and bluegrass (yes, I go there) were all glorious on the Gates. But then again, these genres of music are usually recorded with more care, with less processing, compression, and the like. Additionally, these speakers are ruthlessly honest when it comes to reproducing music, as well as the quality of the original recording. If you have a poor recording, the Newtronics Gates will not "sugarcoat" the outcome. For the most part, what comes in goes out.

While the Gates perform well at low volumes, they can be played very loudly, should you desire. Interesting to me was that there is no obvious sign of distress at overload, rather just a subtle compression of dynamics.

First, I have to say, my wife loved the Gates. Usually, she doesn't make any remarks concerning review gear. To me, that says a lot. If we needed speakers, she says, these would stay. I'm not so sure, given the size of our room. If they did stay, I'd have to have a subwoofer, without a doubt.

If it sounds like I'm being hard on the Gates, I don't mean to be. Keep in mind; this is Newtronics' entry-level product. They can't (and aren't going to) put all of their performance tricks in this model. How many $30,000 pairs of Megas do you think they would sell if they did?

For those "non-rockers" who desire high quality sound in a relatively compact enclosure, the Newtronics Gates are not to be missed. Rock fans may want to check them out as well; you may find that their shortcoming is not as bothersome as it was to me.

Overall, I really did enjoy my time with the Newtronics Gates.

At roughly a kilobuck per pair, I found the Newtronics Gates to be very well built, and a very accurate performer. They are a good value for the money. In fact, I'm now curious as to what Newtronics is capable of producing given a larger budget.

I would like to thank the US Importer, Sven Voelk of Interlink Audio, for providing the review samples.

We, Interlink Audio Inc., and the manufacturer, Newtronics GmbH, would like to take this opportunity to thank you for taking the time to review our speakers.