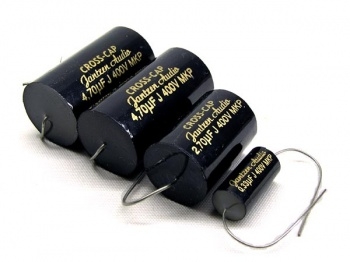 Is it always for the better?

Almost every loudspeaker in the market uses a passive crossover, i.e. a network that divides the audio spectrum into parts, in order to feed each driver with the appropriate portion of frequencies to reproduce. Full range speakers and some electrostatic panels are exceptions to this rule, since they normally do not require crossovers.

According to expert audiophiles, passive crossovers are the source of all evil, because they add their own sound signature, which is a chaotic and unpredictable combination of the sound characteristics of their passive components: caps, inductors and resistors. Sometimes loudspeaker designers decide to keep the crossover network as simple as possible: just one cap on the tweeter, leaving the woofer filtered just by its own mechanical limit. The cap creates the so-called high-pass filter, that is to say a circuit that cuts off low frequencies. The value of the cap (in uF) determines the frequency of this cut-off. You might think this is a cost-cutting choice, but there are such radical solutions even on expensive loudspeakers (e.g. Diapason). As a consequence, the sonic signature of that one and only cap is of paramount importance.

In any case, you can't escape from using caps in a crossover network. One might think that using the best caps drives you home dry and safe. This is not always the case. On commercial designs there are production costs that must be kept under control, hence audiophile caps, which are generally quite expensive, are not an option. Hence, the designer has to rely on standard caps. Audiophiles and DIYers tend to think that replacing these cheap caps is the best and easiest way to improve the sound of any loudspeaker. It sounds logical, right? [If you wish to learn more on tweaking a loudspeaker, read our Idiots' Guide to Tweaking]. 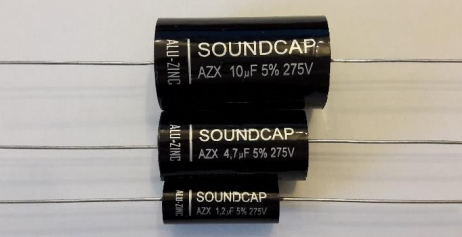 Well, the point is that even an inexpensive loudspeaker has been precisily tuned around those caps, and replacing them with different components, even if of the audiophile kind, might alter a highly sought-after equilibrium. You might think that, as long as you do not alter the caps value, the equilibrium should not change. Same value = same crossover point = same equilibrium! Well, yes, most of time...but not always.

The point is that caps offer some internal resistance to the signal, which might be small, but not zero. In the real world, there is no perfect insulator, just more or less perfect. This is why capacitors have leakage (equivalent to a resistor in parallel with the capacitor). How much leakage depends on the dielectric material of the capacitor. Audiophile caps are built with high precision procedures and better materials (dielectric etc.). Sometimes, this has the side effect of lowering the cap resistance. As an immediate result, the sound level of the tweeter increases. You might perceive this as a positive effect, because the high frequencies are more audible, but actually you have altered the equilibrium of the loudspeaker. In other words, the tweeter sounds at a higher level than it was intended to do, by the designer. You have altered the original design, and yes, you might prefer this brighter sound, but that loudspeaker was not intended to sound this way.

Now, if this altered equilibrium takes place, you can add a resistor to the tweeter in order to lower its level of emission, but things - again - are not that easy. First of all, any resistor adds its own signature to the sound, has an impact on overall impedance (hence the loudspekaer might be harder to drive by your amp) and, generally, the crossover network becomes more complicated: more components are not exactly the shorter path for getting a clean and transparent sound.

In the second part of this article I will investigate on a quite surprising case-study: a loudspeaker with just a cap on the tweeter that changes its sound according to the kind of cap used, while inserting audiophile-grade caps will not always be the best option.