Exclusive: Transcriptors are back in business

An interview with Michael Gammon of Transcriptors Limited 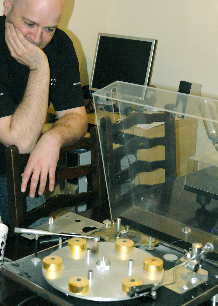 
I received this letter from TNT-Audio reader Eli Kirkby-Weir:
Hi Mark,
Yesterday I liberated a Transcriptor Saturn from a musky old shed...
I have managed to resurrect the arm, however I am missing the headshell.
I was wondering with all your experience whether you know where I might locate such a thing?
Bit like having a boat without a paddle..... 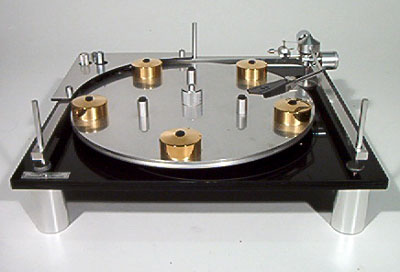 I had a Transcriptor Saturn from about 1977 to 1981. It had no arm and the motor was described as dead (it just needed a new 20mm fuse) so I bought it for just £15. I took the prototype Hadcock Unipoise off my Connoisseur BD1 (bought together for £30) and fitted it to the Saturn, which was a tight squeeze. I had an acrylic over-platter made by a local plastics company (£4), and the Saturn made great music for 4 years until I bought a Thorens TD125 & SME. I sold it to a fellow student along with a pair of Quad II&22 pre-amp (do you still have it Mike Tzirki?). It did not suffer any of the noise or rumble problems described on various web forums, because I made sure the motor was properly mounted and had a new capacitor.

The missing headshell is a very interesting question. Michael Gammon, heir & successor to David Gammon, the Transcriptors originator, has a website with a spares page and lives just down the road from me in the next county.


Michael was at the Heathrow Show at the Park Inn in London demonstrating the new version of the Reference turntable and the new Spider turntable (loosely based on the Skeleton).

I rang Michael (David's son) and had a splendid chat on the phone and planned this proper interview. He will have a look and see if he's got one among some of the as yet uncatalogued quantity of items and papers he is trying to get through. He sounds a really helpful guy, so do ring him to find out if he's been successful on your behalf. 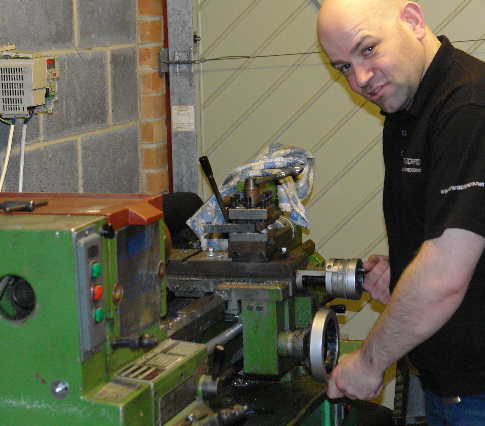 So here it is, a TNT-audio exclusive first interview with Michael Gammon who is relaunching Transcriptors Turntables, reviving a version of the classic Reference and introducing 3 new models.

"Three new models?" Enquire plebs, stage left, "Surely the old fool misheard Michael, nobody starts a new turntable business in 2009 with 3 new models!"
Transcriptors are no new start up company, responds the old scribe, they were an established brand with a track record of ground breaking but successful designs. Michael has a background in production engineering, especially plastics, so this experience lends itself well to exploiting 21st century production and QC values to the classic designs. Hence an introductory line-up of four models spanning a range of UK price points familiar to European audiophiles.

The current Reference loses the terms HYDRAULIC or ELECTRONIC from the name because it will have neither the clever silicon fluid speed control, nor the electronic alternative. Similarly the new version lacks the X6 strobe mounted on the motor plate and driven directly off the platter drive belt as a belt-tensioning idler wheel. The original pitch adjustment was considered essential in 1963 due to the speed inconsistency of mastering practice between the record companies.
It also compensated for different degrees of stylus drag with wide variations in tracking pressure and stylus profile. The new Reference features the 6 gold plated platter weights of the later models, risen from 3 on the '63 Reference and 5 on the Saturn.

The new models are made individually to order, so Michael estimates a typical 6 week lead time for the customer to develop a fever of anticipation. Spares, replacement parts and other special requests are dealt on an ad hoc basis, with Michael drawing parts individually, then sending the CAD drawing to suppliers (as he does with the current turntable components) which does sometimes result in longer delays. Prototyping has been practiced in his garage in traditional British audio style.
However, after a long search he has found ideal small factory premises nearby and Transcriptors will be moving there soon. The modern facility will not be the first; Michael's father David moved to purpose built premises in Ireland and subsequently North America after the move from Boreham Wood, next door to Michell. The Michell connection is well known but usually inacurately reported.
Michell used to make many of the componants for Transcriptors when they were at Boreham Wood, so when Transcriptors relocated to Ireland, to manufacture a range of new models, David and John Michell drew up a 'technical agreement' whereby Michell would continue to manufacture Electronic and Hydraulic Reference turntables as he already had most of the tooling and facilities in place. When I had mentioned my old Transcriptors Saturn turntable to John, in the late '80s, he explained the arrangements to me and pointed out that the Synchro and Gyrodec were his designs, not the Saturn or Reference, which were David's. The Gyro's platter weights may have been a styling nod to the Transcriptors although the Gyro's were there to lower the platter centre of gravity below the inverted bearing axis. 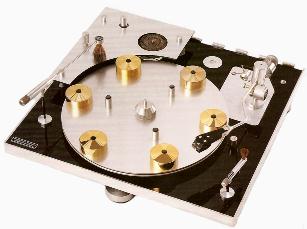 The Reference always had a conventional bearing, a stainless steel shaft on a captive stainless steel ball. The shaft is kept to the smallest effective diameter to minimise friction and the old models used the typical turntable practice of PTFE. Here is where the new versions improve on the original. Michael fits Delrin bearing housings. This self lubricating plastic is commonly used in hostile environments like engine valve guides so is well within its performance envelope at 33rpm at room temperature.

Michael recalls that a contemporary Scottish turntable maker was prevented from using the Transcriptor bearing design in their turntables, by David's court action. He also describes how they were told of impressively accurate, but anodised black, copies of the Fluid Arm, being sold in Tokyo hifi boutiques, after they'd been photographed extensively at a hifi show, although no action was taken. Michael recalls other stories of his father standing on the mezzanine gantry in the factory and hurling newly packaged Reference turntables to the concrete floor below to test if the packaging could survive the rigours of shipping worldwide. David Gammon used to joke that the materials other manufacturers used to make their plinths were the materials Transcriptors used to make their packaging. 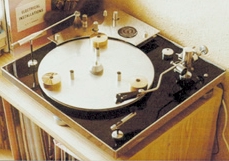 In 1963, when David was designing the original Reference prototype he experimented with various methods of record support. In A-B tests he found that two concentric trios of tiny rubber nipples were indistinguishable from flat mats so, following the less is more philosophy of exposing the turntable workings, produced a platter with 3 gold-plated brass weights on the periphery of the aluminium platter and 3 inner aluminium supports, all 6 with compliant rubber nipples atop. The 3 peripheral weights were doubled up to 6 as vinyl became thinner during the 60s. The nasty 70s Dynaflex response to the oil crisis being the nadir of LP production quality deterioration. Hence the later models featured 9 points of support.

The choice to reveal the workings of the turntables, rather than conceal them in furniture plinths, was inspired by the practice of clockmakers making glass sided clock cases to demonstrate the intricacy and accuracy of the engineering involved. The earliest Hydraulic also featured black painted plywood bases, later replaced by marine-ply with acrylic top surface in a variety of colours and finishes according to customer demand. A champagne tinted mirrored sample was sitting on Michael's workbench the day I visited. Transcriptors ownership included two members of Pink Floyd, Elton John and other artists of the era, so specs could be pretty imaginative. 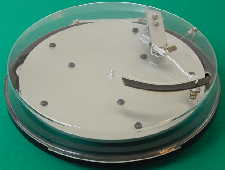 Offered more modern and cost effective premises in Ireland than the cramped Boreham Wood facility, David Gammon exported the company and began developing new models. The Round Table was introduced at a price which put it against the ubiquitous budget Garrard SP25 and significantly undercutting the early Dual CS505. It used Ruby jewelled arm bearings, like its bigger siblings, but in an arm suspended from the turntable lid. This removed the need for subchassis and armboard and all the associated costs and compromises. They came prefitted with a version of an Ortofon cartridge specially produced for this application. Your humble scribe, a Saturn owning student at the time, never saw one in the flesh as they were all exported accross the Atlantic. They are now collectors' items belying their original budget status. 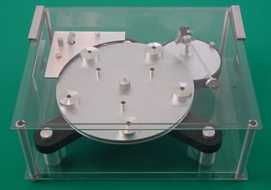 The aforementioned oil crisis of the 1970s (older readers will recall lowered speed limits on roads - the US double-nickel included) affected the world price and availabilty of the acrylic so essential to the Reference turntable. David immediately sought an alternative to acrylic and chose glass as an aesthetic equivalent. David designed a case to control the lively behaviour of glass compared with the inert acrylic of the existing models. The glass was manufactured by Triplex, famous for automotive windscreens, and this led to the Skeleton model, derived from the Saturn.

The Vestigal Arm was probably David's innovative response to the compliance wars between cartridge manufacturers of the day. It placed the jewelled vertical pivot at the headshell end of the arm wand to minimise vertical moving mass, not unlike the Dynavector DV507 but counterbalancing vertical mass via a thread to the counterweight, presumably so that the polar moment of inertia remains minimal. The Vestigal Arm was such a success in North America that David and his family relocated once again to an appartment overlooking Central Park in NYC.

The first Transcriptor Arm was made before the first turntable. Despite evolution throughout the '60s and '70s it has always remained a true unipivot with a watch-style ruby jewelled bearing. Different versions were made to suit the Saturn and Reference (and other manufacturers' offerings) as may be seen in the picture below of dismantled Saturn and Reference Fluid Arms.

Unusually for their time, the arms always featured thin Litz wire, comprising a mixture of metals including gold thread, from cartridge to phono plugs and Michael still uses the same wire today when servicing them. The new models will be offered with armboards for various arms from other manufacturers.

It is exciting to see the return of a classic audio brand at a time when so many seem to be disappearing. Equally encouraging is Michael Gammon's dedication to maintaining production quality, respecting his father's dedication to the brand he started. TNT-audio will be bringing reviews of the new Transcriptor models as they reach final production versions.

And Eli Kirkby-Weir, the TNT-audio reader who was the catalyst for this encounter, will be pleased to know that Michael is developing an aluminium replacement for the fragile plastic part of the original Fluid Arm headshell!