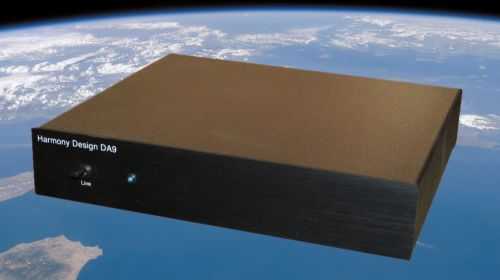 TNT first reviewed the Harmony DA9 DAC in 2005 when Lucio concluded that is was something of a bargain. Since that time, Harmony Design have continued to develop the DA9 to improve it still further. I've stated before that in my opinion, some of the best hi-fi comes from products that are not radically redesigned every year, but ones that are refined over a long period of time. The DA9 falls into that second category.

So what has changed over the years since our last review? Lead-free solder is now mandatory. Those of you who don't dabble with the DIY side of hi-fi may be surprised to learn that the type of solder can, and does affect the sound. When it does, the designer may then need to change other aspects of his design to compensate. So it's no surprise that there are component changes inside the DA9 too. Perhaps the main change is that the old CS4390 + sample rate converter (FIFO) are replaced with the more modern CS4398 and a micro controller. As Mattias of Harmony Design pointed out, we shouldn't become too hung up on which chip is used, it is more important that that chip is implemented properly. The opamps have also been changed primarily to improve the clarity of the DA9, and various caps have been changed too.

Externally, the DA9 is unchanged. In an earlier review, I described the Audial DAC as having a 'conservative' appearance, and apparently that was taken by some to be derogatory. But in English it simply means that the styling is simple or functional rather than ornate, and I am happy to use the same term to describe the appearance of the DA9. One of my pet niggles though is the size and shape of some hi-fi. The Harmony is a bit over half a shelf wide which to all intent and purposes requires it to take up a whole shelf. I much prefer to see equipment kept to half-width and made a bit deeper. I can then place two components on one shelf. The build quality is quite good going from the feel of the case, although it was sealed shut and I couldn't take a peak inside. As regards the features, the DA9 can proudly boast an almost full set. There are digital inputs for both electrical (SPDIF) and optical (TOSLINK), although I would always prefer to see a BNC socket as opposed to the RCA fitted to the DA9. Perhaps best of all, the DA9 has a pair of balanced output sockets, something that you don't see on that many DACs.

For the review, the DA9 first went into my second system. It was fed by a modified Logitech SB3, and then connected through its balanced outputs to a JE Audio SL20 pre amp, and JE Audio VS70 power amplifier. Speakers used were my open baffles using Goodmans 201 drivers with super-tweeters, and some modified Mordaunt Short Pageant II's. I gave the DA9 48 hours of continuous running to make sure that it was burned in before I started listening.

The first impression of the DA9 was that it has a very well balanced presentation with no part of the frequency range 'favoured' over another. It maintained a good control over the music, but didn't appear to be so strong that the music was restrained in any way. The clarity was very good, as was timing, and it was very musical presentation. The sound-stage (no doubt helped by the amplification used) was large (deep as well as wide), as was the scale. Performers sounded life-sized, and the thrill of listening to full-scale orchestras was addictive. With such scale, drums become more prominent and being so well controlled, the percussion no doubt helps give the music that WOW factor on the right recordings. Bass was tuneful, and that's quite an important factor in the music coming across as enjoyable. Instruments were portrayed very accurately, even in busy passages of music, it was possible to pick out individual instruments. No matter what music I threw at the DA9, I could find nothing bad to say about the performance. One point worth mentioning though, this lightweight piece of gear sounded better for being coupled to a thick slab of granite with a set of my Tripods in between.

In his review, Lucio commented:

It may lack the "breath" of better converters and even show some edginess in the upper mids. 3D sound stage isn't impressive, though still precise and proportionally correct.

From my first audition I would say that both those points have been successfully addressed in the current model but please read my comments on the edginess issue further on. The sound-stage was big, deep as well as wide.

Of course, no review is complete without a comparison to some similar items so I slipped my modified Scott Nixon DacKit into the same system. I would say that the DA9 has a little bit more 'air' than the DacKit, while the latter, with its external power supply and Paul Hynes regulators goes very slightly deeper/tighter in the lower frequencies, and has a slightly 'blacker' background. But I found it extremely difficult to choose between the two. Both are very good DACs and provide the listener with a very enjoyable listening experience.

In my main system the DA9 was fed by another modified SB3 via a Behringer DEQ2496. It was then connected to a Burson buffer and Virtue V1 amplifier, with an active filter feeding another class-T amp for the woofers on the Hawthorne Audio Duets. The DA9 replaced a modified DiyParadise Monica3 and it was clear from the outset that the latter (again enjoying the benefit of the Paul Hynes PSU) goes a tiny bit lower in the bass, and has a just a very small amount of sparkle at the top end. Where the DA9 scored was with its glorious mid-range, making voices 'come alive', bringing some performers right into the listening room. The bass of the DA9 really shone in that system, perhaps shown off to its best by the open-baffle bass. Whatever the reason, it was about the most tuneful bass I've heard from a DAC or any source for that matter. It's loud but not too prominent, and bounces along with perfect timing with the rest of the frequency range. The DA9 played all genres of music well and was extremely enjoyable to listen to. Addictive is how I would best describe the bass with the DA9! I don't think that I could say that the DA9 is at its best with any particular type of music, everything sounded good. The 'air' that the DA9 now has (compared to what it had when it was reviewed previously) makes for great presence on live recordings, and it is easy to listen to with no listening fatigue. It's a very transparent DAC and every detail came through loud and clear. Harmony's designer told me "But since the new 4398 based da system into DA9 is so good I use opamps that are as new cleaned windows", and that's a very good description.

In his review, Lucio said that the DA9 may "show some edginess in the upper mids". Going back and listening to the Monica3, and a Mark Findlay Audio DAC, it is clear that the DA9 doesn't sound as smooth, particularly on female voices and strings. It's not 'rough' with the DA9, not 'nasty', and I wonder if the sheer transparency is revealing some poorer aspects of some recordings. But it is slightly more 'grainy' than the other DACs. I also noticed this more so in my main system with the class-T Virtue amp than with the other system using valve amplification. Even with the Virtue amp, the few recordings that I heard that were shall we say 'exposed' by the DAC9 were a small price to pay for the transparency that it brought to the rest of my music collection. Although more than acceptable, the sound stage wasn't quite as large as with the Monica3, certainly not quite as deep, but when the music is right, do we really sit there thinking about such issues as how large the sound stage is compared to another DAC?

Given that the Harmony DA9 is designed and built in Europe (as opposed to the Far East), given its range of features including those balanced outputs (and you can even specify it to have a volume control), and given its performance, I have no hesitation in recommending the DA9 although an audition is recommended keeping in mind that it is very revealing, and the partnering equipment is a factor in how much you will enjoy this DAC . One other factor in the DA9's favour is that Harmony Design will repair items that they sell. Given that buyers are more than likely to want to stay with their DA9 for years to come, that is reassuring; not that the DA9 is any more likely to require repair than any other DAC.

In conclusion, the Harmony DA9 is a very capable DAC with the emphasis on musicality and enjoyment. The improvements that Harmony have made to the DA9 have worked, and as commercial DAC's go, this DAC will still take some beating at the price. Audionuts of my age can easily remember the first separate DAC's coming onto the market. To my ears, they sounded very much the same. The DA9 has reminded me how far we have come since then, and how much better some DAC's are than others!