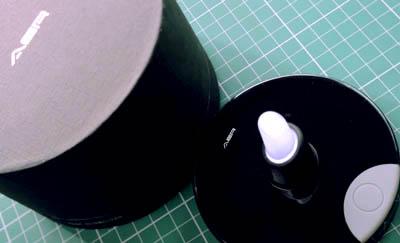 Brings YOUR protons into perfect alignment?

Regular readers and the plebs chorus all remember my review of the Euphoria Technology™ and PVA Field (Proton Vibration Alignment Field) IPC Room Enhancer. All the listeners who experienced it were disappointed not to hear any difference at all. We had hoped to be at the forefront of a breakthrough but heard nothing to comment on, let alone evaluate for merit.

This prompted an enthusiastic, if misplaced, reaction from objectivists and skeptics alike. Your old scribe is an enthusiastic agnostic in most areas of life. Your old scribe knows little and knows how little he knows. Being in a 'not knowing' position allows your old scribe to experience unexpected, wonderful amazing things but this did not include the room enhancer. The pseudo-technical explanation was wafer thin and dominated by hyperbole, which is excusable by a new company who need to disguise their product's secrets. Hence the disappointment when we heard no effect.

The arrival of the AER VIP (Very Impressive Products) CD Energiser featuring PVA Field was delayed due to the usual UK Customs & Excise hassles. It is very important to pay our correct taxes to provide for public services but this is covert appropriation, not subject to parliamentary scrutiny, and it was important enough to start the American War of Independence over this type of taxation without representation. Fortunately this review was written instead of a more local declaration of independence...

All the proton field alignment products are designed by Mr Vian Li, of IPC Industrial Technology, of Hong Kong. They are marketed in the West by Norbert Heuser, VP Sales, in Clearwater, Fla. The CD Energiser is an example of their audiophile tuning devices using their PVA principle, while numerous other fields of human endeavour have been addressed by the company's other ranges.

Last time we tried unsuccessfully to decode what the IPC AER PVA things actually do. While any claims for mysterious sub-atomic action tend to stretch credulity, we're still at the testing hypotheses stage in post-Newtonian physics so we'll let that go. This was considered in more detail here, so we'll not bore you with it now..

Powered by three AAA batteries, the unit is claimed to treat up to 500 discs. With a fresh set of batteries, this review tried to treat about 25 discs. Given the amount of energy usually needed to muck about at sub-atomic levels, this device is extraordinarily economical. The principle active device of the room enhancers was based on the special version of what looked like a camera battery. The Disc Energiser requires no such special power source.

The treatment procedure requires the user to position the CD or DVD to be treated, on a central spindle on the device. This must be label side up so the playing surface is face down. The flange on the spindle that supports the disc is angled so that the disc is not parallel to the device base (where the batteries live). On the base is a grey button. This is depressed causing the spindle to light up for a few seconds. That's it, the disc is now treated.

The treated disc (CD or DVD) is now put in the disc transport and played. While playing, the disc is claimed to be treating the player as well as the disc. The effect on the player can last up to 2 hours after a treated disc has been played, according to the manufacturer and other reviewers. This adds dangers to the rigour of the review process. The implication is that a treated disc will treat the player, and the now treated player will affect an untreated disc. Therefore every test must be a one-shot comparison between untreated and treated disc (treated in another room) and then no more tests until tomorrow.

"The Old Scribe must have borrowed some patience from a saint, compared to his usual hyperactive reviews," observe plebs, stage left

Just remember that the presence of the observer also changes the thing being observed and there is no such thing as an objective description of experience. We are at the mercy of your old scribe's ability to string (no, not string theory) chains of discrete packets of meaning (words) together and for it to be read optimistically. Furthermore, there are at least 101 uses for a superpositioned dead cat, Herr Schrödinger. However, there are not many possible test procedures that can be done with a product that claims lingering effects. A-B-A, B-A-B and A-B-X are out of the question, whether 'A' is off and 'B' is on or vice versa. Other reviewers have suggested methods to overcome any possible enduring effects and this is your old scribe's recipe.

Therefore tests on the Disc Energiser were always A-B or A-A to mitigate the lingering nature of the claimed effect. Group behaviour effects (Asch, Bion, Janis, Milgram, Turner, etc) are therefore only possible once per group and the group was never more than two plus tester.

After treatment we were disappointed that nobody heard any pianos getting heavier or better defined, any bass deeper or more extended, nor more precise intonation as others have reported. No listeners heard the sound becoming more analogue, all missed the improved harmonics and all failed to notice the reduction of sibilants too. Even when listeners were invited to notice such things, despite the expectation of confirmation bias, none of these phenomena were observed. According to the AER testimonials page Jack Bybee (of Bybee Quantum Purifiers) is an enthusiast for AER products. Ben Piazza, owner of Shakti Innovations is an enthusiast too, quoted as saying "It is the finest CD improvement tool of its kind", which is far from square. Why can't anyone hear that in this listening room? Surely we can't all be deaf and we have seen the light that comes on every time the grey button is pressed.

There are comments elsewhere on the reviews quoted on the AER website, stating that instruments became more full bodied when their products are applied. This had prompted your old scribe to surround an individual bottle of Agostino Petri Chianti (mid value with some scope for enhancement) with the five room harmonisers. That had no effect on the already quite full bodied Chianti, so this time your old scribe tried holding a glass of mid-range Haut Médoc over the CD Energiser. Before the plebs chorus accuse this test of being fatuous, the AER website suggest all kinds of uses for this technology and we might have discovered a new one. We didn't because the AER CD Energiser is equally ineffective as a wine energiser.

The company quote a claim on their website that measurements with a Radio Shack sound level meter showed an increase of 5dB on peaks, and infer that this represents a 5dB increase in dynamic range. 5dB is nearly a doubling of volume. Your old scribe dragged a Radio Shack meter out, inserted a new battery and measured no difference at all, regardless of weighting or response speed. A calibrated environment meter produced the same result. An old calibrated Mitey Mike capsule did not show any volume difference either. Maybe the sample Disc Energiser submitted to TNT-audio was damaged in transit or was a duff sample. 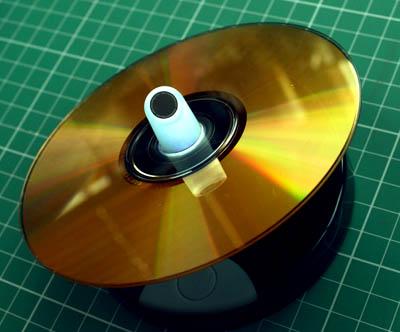 The IPC EAR CD Energizers had no discernable effect, good or bad, during these tests. If this was a faulty sample, the manufacturers have not stated so since it was returned to their care over a month ago, aware of our findings. Generally, we do not write up products needing more development, but these were production samples already receiving favourable or enthusiastic reviews elsewhere. On the basis of these samples, money would be better spent upgrading system hardware or buying more music.