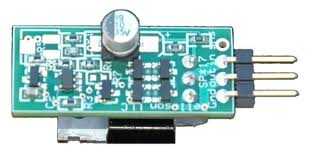 We audiophiles have many obsessions: mains power, interconnects, speaker cables, stands, racks, not to mention our tendency to give every function in our system its own separate box, if possible. I have to admit that I'm starting to doubt most of these nowadays, but there's one thing that I'm still convinced of and that's the importance of good power supply. I noticed this when I reviewed the Naim FlatCap 2X many years ago. Better power supply simply improves everything, and the main difference between budget equipment and audiophile stuff is often the quality of the power supply. This is most true for the small signal stages, like in a DAC or phono stage, where power supply needs to be very quiet. Most power amps will use unregulated power, and with sufficient size and quality of the reservoir capacitors this should work just fine, but at the earlier stages power is almost always regulated, and often this is done with an industrial voltage regulator. Even the Naim FlatCap that I liked so much just contains standard voltage regulators, although one of the better types.

There are people out there who claim they can do better. Belleson is one of quite a few companies selling discrete voltage regulators, which are claimed to outperform the standard models in all aspects, and by a large margin. I found at least half a dozen other companies on the web, but Belleson seems to have a good reputation and gave the most detailed information and measurements for their regulators, so I decided to try them. Burson also makes a regulator, which was tested, and found to work very well, here on TNT before. Actually, if you'd like to know more about regulation, we also have this feature about it.

Back to the Belleson. Their offering is called the Superpower regulator, the technology is patented and available in 3 ratings: standard 0.5 ampere, high current 2 ampere and output protected 2 ampere. Available voltages go from a very low 1.2V up to 30V, and custom regulators can be built for any voltage up to 450V. Almost all voltages are available in both positive and negative. The regulator also comes in two variants with different pin layouts, allowing for a drop-in replacement for most types. Basically, Belleson can provide a regulator for almost any application, at least in audio. The design is optimised for audio quality too, with very low noise, low output impedance, good transient response and excellent ripple rejection. The Belleson website gives many measurements comparing the Superpower with other regulators, always showing an impressive advantage for the Belleson variant.

I decided to use them in my Unity Audio 'The Rock hifi' active speakers. These contain a cross-over board that is powered by a L7812 regulator, which seemed a bit basic to me. Belleson will be able to supply a pin-correct, drop-in replacement for almost every regulator, and mine was no exception. The regulator provided was one of the high current ones. In theory it should all be very simple: just remove the old one and put in the Superpower regulator. But Belleson recommend using their regulators with a capacitor in front and behind, for the best result. I was told that a 0.1uF film cap would work well before the Superpower regulator and a good quality electrolyte would improve things after the regulator. This left me in a dilemma, as the L7812 in my Rocks was used without any of this. Just adding these two capacitors to the old regulator could already improve things, meaning that this would not be a fair comparison. But, these two extra capacitors only cost about £1, a tiny fraction of the cost of the Belleson, so I assumed nobody would want to use the Superpower regulator without them. I decided that this experiment was more about the effects of good power supply than giving a 25 pence regulator a fair chance, so I got the extra capacitors. I used a Vishay 1837 160V 0.1uF film capacitor on the input of the Belleson, and an Elna Silmic 35V 47uF electrolyte on the output. It was a bit fiddly to install all of this, but I succeeded.

One thing worth mentioning is that the Rocks produced much less of a thud when switching power on or off with the Bellesons. It wasn't disastrous before, but it is a lot better after the upgrade, which is a good sign and a welcome improvement. 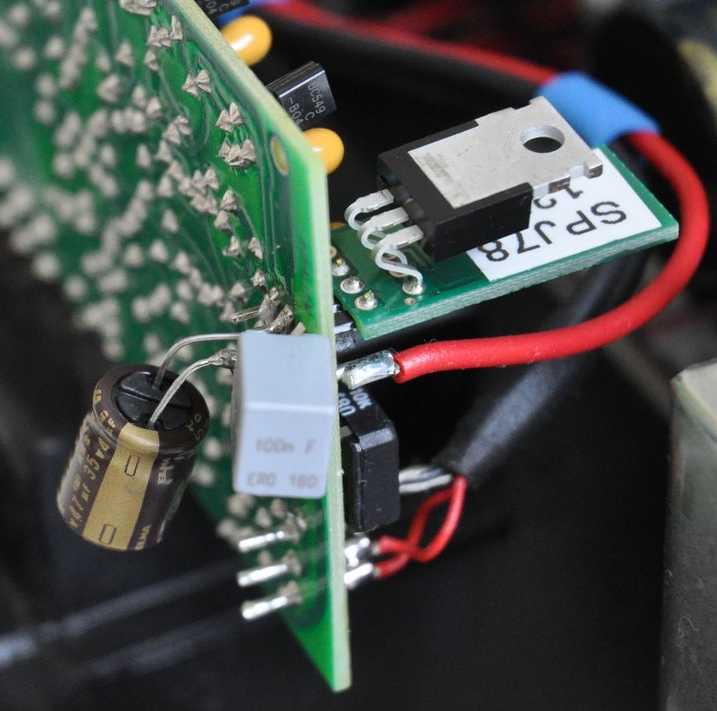 I made sure that I had a thorough listening session just before I modified the speakers. Everything was well warmed up and notes were made of volume settings, tracks played and everything that I noticed during each track. I then installed the Superpower regulators, put my system back together and listened to the same tracks, at exactly the same volume again. I even made sure that everything was precisely in the same position, including myself.

The first thing I noticed was that the speakers still worked fine, which was a relief I have to admit. The overall sound and tonal balance did not seem to have changed, really. They basically still sounded like my 'Rock hifi' speakers, which is good as I like them very much. Still, I soon started to hear some differences too. Nothing was enormously different, but there were quite a few things that cought my ear.

The biggest change was in the sustain of notes. With the Bellesons notes seemed to be longer, and the difference was very noticeable once I knew what to listen for. It even made the sound before the modification a bit dead, in retrospect. Instruments like the piano seemed to 'sing' more because of this, and voices did feel like they did get a bit more support from the acoustic. The triangle on track 6 of 'We get requests' by Oscar Peterson seemed to sound almost twice as long as before with a nice long sustained 'pinggggg', and his piano sounded fuller and more alive.

The next biggest difference was probably in the soundstage, which was deeper, better layered and with less tendency to stick to the speakers. It made the speakers disappear more than before. There's also a stronger sense of the recording space because of that, and consequently a stronger feeling of 'being there'.

The overall sound now has a bit more power and impact, with slightly better dynamic expression. The Rocks could have the tendency to need higher volumes to kick some life into things, and this improved, with things sounding a bit more satisfactory at lower levels. At the same time, peaks in the recording, especially while playing loud, were cleaner with less tendency to harden up.

The midrange feels a little bit warmer, richer to be more precise. Voices have a bit more body to them, with sibilance still clearly audible, but more natural and easier to hear as belonging to the voice rather than some replay artefact. In total this makes voices sound more natural and realistic. There's also more inner detail and transparency, bringing you another little step closer to the performer.

Bass feels stronger and more tuneful. It probably isn’t really louder, but certainly a bit easier to hear, perhaps because of less masking by the rest of the spectrum. Whatever the reason, bass lines are now even easier to follow and bass sound that little bit more fruity than before.

Actually, it is probably fair to say that there aren't many areas that were not affected by the Superpower regulator, but most improvements were small or marginal. Still, small differences add up and the sum total is certainly notable. I'd say that the effect is to make things sound a bit more real, refined and natural, with less electronic glare and grain and more internal detail and expression. Basically, it's a simple case of more music and less reproduction.

These regulators are expensive compared to other types, but not compared to cables and other accessories, and in my system they improved things more than any cable I've ever tried, making them quite good value after all. Of course, you have to be prepared to modify your equipment, and some experience with the old soldering iron is certainly needed, but if you are willing to give them a try, then I can say you won't be disappointed. Nothing changes dramatically, but all the small improvements add up to a very worthwhile difference. Mostly, the sound becomes less electronic and more natural, with added refinement.

Thank you for taking the considerable time and work to review our regulators. I would like to note that Belleson regulators are designed to help audio systems reproduce exactly what they receive. Thus the earlier they are used in the signal chain, the more they can help with accurate reproduction. We're glad to know that, even at the last point of reproduction -- the speakers, you can hear worthwhile benefit from using Superpower regulators.