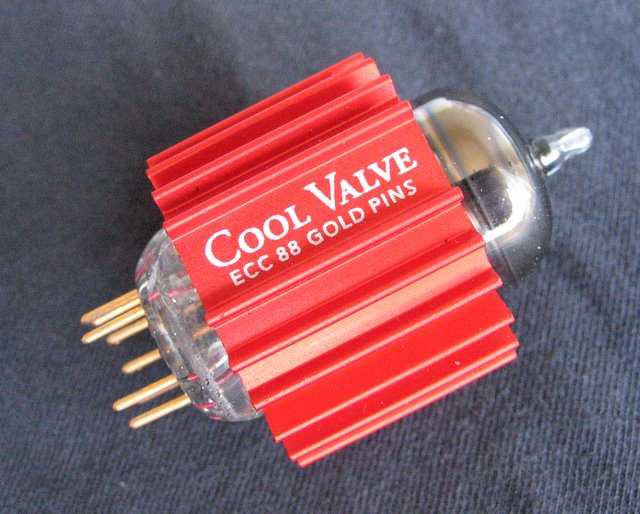 I've only recently started to appreciate valves. First there was the Audio Note CD player, then the wonderful Astin Trew CD player and after that I had a great time with the hybrid Vincent power amp. It does seem that valves have a certain, erm, something. Warmth and clarity, in my, admittedly limited, experience. Of course, valves have disadvantages too, one of them is that they wear out and have to be replaced after some time. But being able to replace them can be an advantage too. Just imagine what life would be like if you could do that with transistors!

So, welcome to the wonderful world of valve rolling, as the Americans seem to call it. As usual I was greedy and wanted to try the best I could get and this led me to EAT, or Euro Audio Team to be more precise. They have managed to make something rather special out of the humble ECC88 valve. It is build to a very high standard, with gold plated pins for example, but the most striking feature must be the 'cool damper' that the valve itself is encased in. This is made out of anodised aluminium and the valve seems to have been blown into it in such a way that the two components are now bonded for life. It feels really sturdy and makes these valves look quite different, to say the least. And it saves on a separate damper, obviously. EAT also produce these dampers for other valves, in which case they are made to fit the valve in question with little adjustable fins on the inside. The damper should make the valve less susceptible to vibrations and also cools it at the same time. EAT claim a life expectancy that is about 50% longer than normal valves because of that. This, and the included damper, compensates somewhat for the high price, but even if you take these things into account this remains quite an investment. And, yes I know that other people spend multiples of this on cables, but I am not prepared to make cables my reference for good value yet. The fact of it is that this valve is about 10% of the price of the CD player I'm using it in, and that does make me expect something. 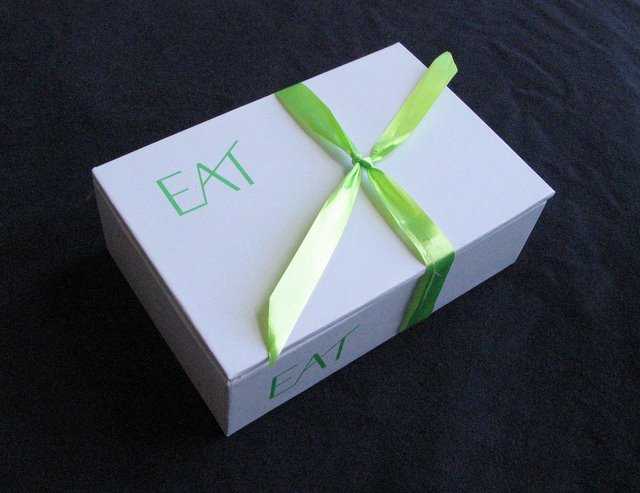 The packaging of these valves deserves special mention. They arrived in a very pretty box with a green ribbon tied around it. It really feels like you're opening a box of fine chocolates, but instead of finding Belgium delicacies inside I was confronted with the picture of two bright red valves cosily nested in green straw. Wonderful, slightly weird and actually more than just a little joke, as the box turns out to be very practical, with a magnetic lock for example, and the whole package protects the valves very well while looking great at the same time. It also feels like real self indulgence, which I suppose is what it really represents. 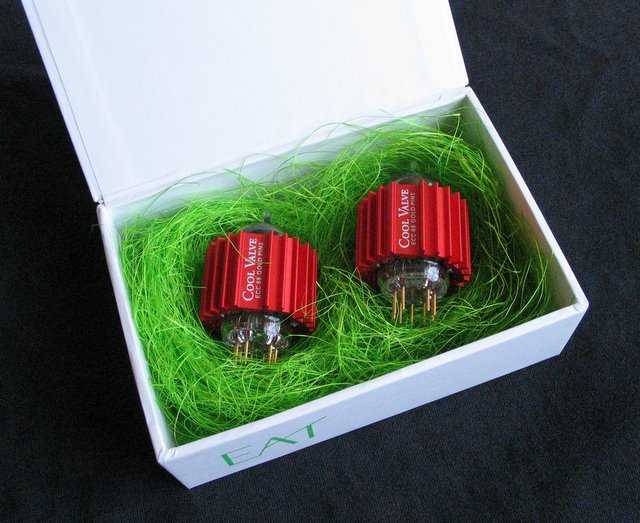 My Astin Trew AT3500 CD player uses a single ECC88 double triode in the output stage. The standard valve for this player is either a Golden Dragon or an Electro Harmonix which I had both available. The player comes with a simple silicone valve damper too. Astin Trew can provide an upgrade valve, which is a Philips JAN from the sixties. This will set you back about £20 and represents excellent value, as it does improve the sound noticeably. I had one of those too. So, there I was, with 4 different valves to compare. I borrowed a decent headphone amp for the occasion, to make sure I could hear every detail optimally, but also listened through my Dynaudio Contour 1.8mk2 speakers. Amplification was my Django transformer preamp and either my Electrocompaniet ECI-2 amp, the Vincent SP-331 MK power amp or the Creek Destiny power amp.

This turned out not to be an easy task, as changing a valve takes a few minutes, even if you leave the top of the player unattached for the duration of the experiment. And then the new valve needs to warm up too, of course, which takes another 20-30 minutes. By that time I had usually forgotten what the previous valve sounded like, so direct comparisons are more or less impossible. Still, someone had to do it, so I soldiered on and kept listening. By using the same valve for longer periods and only swapping a valve once during a listening session I was able to compare them pairwise and get a good impression of the differences, even if progress was slow. I first used the EAT valve for a couple of months in my AT3500 and liked what I heard. To get a better idea of the difference with the other valves I then compared the Electro Harmonix and the Philips JAN to the EAT. I used both my headphones and my speakers for this. I always made sure that the valves were warm before doing any critical listening. The differences were not huge, I have to admit, but significant nevertheless.

Let's start with the Electro Harmonix, the cheapest of the bunch at about a tenner. When I started listening to this one I immediately noticed a certain 'roughness' and 'restlessness' in the sound. Bass is not completely controlled, the mids are slightly shouty and the higher frequencies lack the sweetness that I was used to by now, after my time with the EAT valve. Switching back to the EAT confirmed this. The slight harshness and grain of the Electro Harmonix was replaced with a more textured and tonally richer sound. The whole picture is more layered and subtle, with more inner detail and less noise over the whole spectrum. The sound is more balanced and it is easier to listen to individual instruments or voices. The whole presentation is more natural and musical. Small details aren't swamped by louder sounds anymore. At the same time there's also a feeling of increased dynamics, with more life and power. The EAT sounds more relaxed and more lifelike at the same time. Again, the difference is not enormous, but certainly very noticeable and worthwhile.

When comparing the EAT to the Philips JAN valve the differences were a bit smaller, but still easy enough to detect once you know what to listen for. The Philips valve is more controlled in the bass and cleaner in the mids and highs, as compared to the EH, but the EAT valve still bettered it in these areas. I also noticed an increase in 'air' around instruments and more spatial detail in general. Bass was even more textured and natural sounding and the mids are now perfect, without even a hint of roughness or an overly analytical character.

These observations were mostly made using my headphones with a dedicated headphone amp. I also did some comparative listening using the Creek Destiny power amp that came in for review towards the end of the EAT review period. The Creek amp is very clean and has outstanding resolution, so is a great tool for the job. It also has a very lively and dynamic personality, with good control and excellent precision. Again, I first listened to the Destiny for a few days with the EAT valve in the Astin Trew, just to get used to this new amp, and to give it a chance to burn in a bit. When things seemed to have settled in I tried the Philips JAN valve again. I made sure it had been switched on for about 24 hours before listening, so that it was thoroughly warmed up. It immediately became clear that the JAN valve sounded different. The overall sound is slightly less refined and dynamics seem a little bit 'blunted' compared to the EAT sound. It all sounded a tiny bit less spacious and ever so slightly more 'grey'. Swapping back to the EAT ECC88 valve resulted in a sound that was a bit more open and lively, with more texture and presence. Bass was a little bit dryer and better controlled and the top end seemed more extended and open.

When comparing the EAT valve to both other valves it always showed a clearly lower noise floor, enabling fine detail and acoustical cues to be heard more easily, and a cleaner and sweeter presentation overall. The whole spectrum seems to be extended a bit, with tighter and more tuneful bass and more air and detail at the top end. There's also an improvement in dynamics and vitality and a more natural and less 'rushed' presentation. All of this without losing the nice warmth and clarity typical for valves. 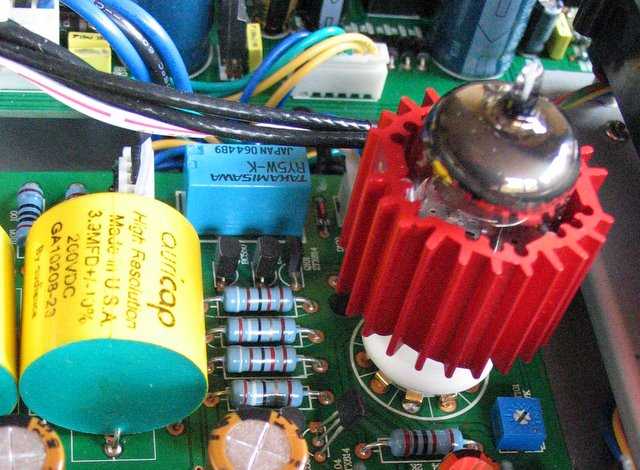 This is an expensive valve, but the extended life expectancy and the included damper go some way to compensate for that. The sound is better than more affordable valves in my Astin Trew CD player, with less noise and more music. I do think that it does represent decent value, and is actually one of the more effective ways of upgrading the AT3500. Compared to top quality interconnects or vibration control it is not even that expensive, and I doubt if any of those other option will really make more of a difference than this valve. In the end I have no problems at all recommending it.