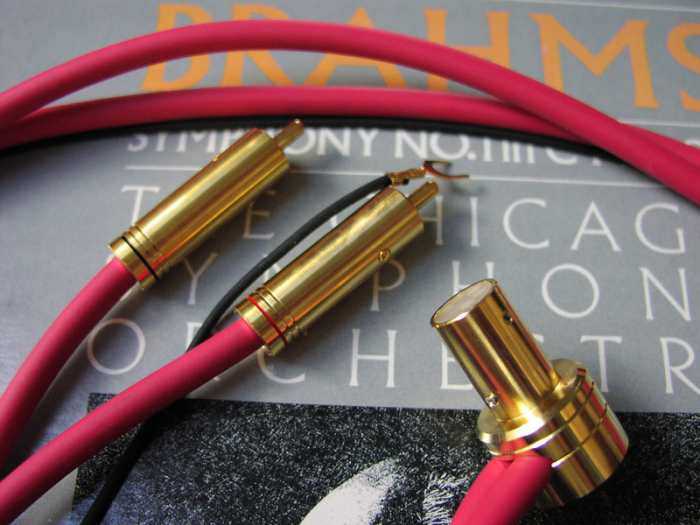 This short review breaks two of my usual "rules". First it's of a cable, and in the past few years I've avoided cable reviews simply because the effect is generally system dependent and I find it extremely difficult to make value judgements on something that costs $500 that I could make in an hour for $50. The second rule is that I always find something to moan about no matter how minor...

OK I guess I should try to justify this... First look at the picture. What you have here is a standard DIN arm-cable plug to two RCA's. The plugs look very high quality don't they? - well they feel it too. More important is that the DIN plug is of the right-angle variety. This makes it especially useful because for many decks a right angle connector is essential to give clearance under the arm (as with my Opera LP 5.0), it also gives a much better cable run on some turntable/arm combinations. This plug and the two phono's are beautifully machined out of brass/beryllium alloy, important if the turntable is "open" with cables/plugs visible. The cable itself looks like perfectly decent stuff. So now do the sums. This costs $160. If you made it yourself you'd need some high quality phono plugs and a right angle DIN connector, the former aren't going to be cheap and the latter is going to be expensive. Add the cost of some decent budget cable, figure in the angst and danger in soldering DIN plugs and you've got to figure that $160 is pretty good value.

Now to the snake oil bit. Every cable manufacturer has some take on cable properties and so I won't bore you with Extremephono's press release, though you can see it on their website www.extremephono.com. Obviously I'm just covering my ignorance here, but to give them the benefit of the doubt, the cable is supposedly designed for Moving Coil (MC) cartridges and specifically to match their need for correct loading. So I assume that rather than the usual cheapo mic cable we have at least something "custom" and designed for the job. One factor in this is the separate ground wire that should offer better screening and some flexibility over termination.

It's a very pleasant cable to use, the plugs are an excellent fit and offer robust strain relief (in every sense of the word). Whilst manufacturers always stress the importance of being mega careful with their cable joints, in the real world of scrabbling behind amplifiers and being crammed into tiny spaces under arms, a cable that can patently take this abuse (and no-one is as bad as a reviewer) gets a big plus in my book. The cable helps by being nicely flexible. The one snag (there! I knew I'd find one!) is that the DIN is more bulky than the SME equivalent and so if space is very tight, for example with an SME 5 on an Orbe, the standard DIN won't fit (but Extremephono will fit a smaller plug at extra cost). In every other respect the Extremephone DIN is better than the SME.

Hmmm... Well lack of it really. The Crimson was as well shielded as any cable I've used so that bane of low output cartridges - hum - was largely absent.

Now the tricky bit :-) This is not like an amplifier change or a speaker swap where big differences are immediately apparent, and then often forgotten after a period of acclimatisation. No, it was just a feeling of "sounds good tonight" (quoting "she who must be obeyed..."). You know that feeling when over a period of days you lose the urge to fiddle and everything just seems "right" and you are able to forget the hi-fi and get on with listening to the music? That is what happened. I don't want to make any claims about better high-frequency extension or bass slam; or another layer of detail, it's just that the combo of Crimson, Dynavector DRT-1s/507, Opera LP 5.0, Audio Note M3/Quest silvers and Loth-x Polaris just sang, so much so that I wanted to give up reviewing on the spot so there'd be no risk of screwing the sound...

Of course here we hit the caveat mentioned in the preamble about system dependency, but as there was no great tonal shift or "wow!" moment (which can cut both ways) I reckon that the Crimson did contribute to the sheer ease and flow of everything I played. So to pin down what it was doing? It sounded particularly clean, not in the sense of squeaky, but as in the absence of nasties, being grain or hash or whatever you want to call it. This cleanliness made it easy to listen to and at the same time frees up a load of signal-to-noise to give another, albeit subtle, level of detail. It just seemed that harmonic structures were preserved, edge was there when needed and smoothness when it wasn't.

No, I'm not going to get excited about a cable; really I'm not, but for the moment it stays on the Dynavector as an easy to use, reliable and attractive cable that doesn't screw the sound and might even contribute to the lovely music coming out of my living room as I write. Extremephono make some much more "extreme" tonearm cables, but for the moment I'm happy with the bargain basement...