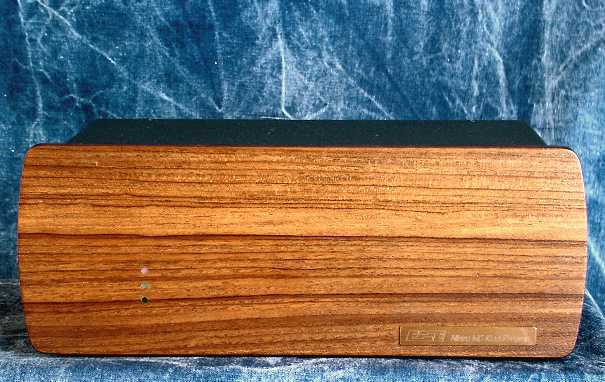 It is a said that you don't really know how much you love someone until they have left you - I'm afraid for we hi-fi scribes, especially cash strapped amateur one's, the same applies with certain components. Of all the items I've had here for review in the recent past the most outstanding has been the Nibiru phono stage, which over a review period of a couple of months, insinuated itself into my system in such a way that when it was inevitably returned to ESE it left me bereft.

So you can see that when ESE contacted me to say that there had been significant changes to the stage to bring it to V2.5 spec and would I like it back, I found myself agreeing like a lovesick teenager. Why? Go see my original review...

Well for some of you these will be significant. Feedback from some users was that with certain moving coils, particularly those with poor current delivery, the output was limited. Here I'd found the Dynavectors I normally use ideally suited, but others struggled. The solution was to increase the gain by 9dB, a considerable amount and giving 75dB overall. The stage is also available with the original gain (66dB) and another in-between (70dB) - these nominal figures because of the current amplifying nature of the design. Internally there are other changes which I'll let the designer Rudi Korosec explain:

"The changes are the following: DC servo op-amp upgrade. The AD825 used now is much better than the opamps used by former Nibiru. Even if this servo is supposed to be outside the signal chain it can spoil the sound so I use one of the best opamps for this task. The sound improvement is more than subtle. The other change is one of the two capacitors per channel riaa. The small 1000pF cap is now just a better grade of the same kind of silver mica cap. The former had feromagnetic leads and lower voltage capacity, the new has tinned copper leads and 500V instead of 100V. Yes, the same type of component of higher voltage or power capacity (for resistors) sound always better. The last change is removal of the plastic film from some Os-con capacitors. Strange? Maybe."

The last change is simply a switch to override the automatic 'charge off' the Mk 1 had. In the previous version the moment a signal was detected i.e. when the needle hit the vinyl, the charger was disconnected so that the stage was powered only from the battery. It was possible that after a long period of play, or perhaps after the needle has been left in the run-out groove for a night (smacked wrists) or if the battery has begin to lose the plot, that the battery would cease to provide enough power for the stage and it would switch off. The new switch means that in any of these cases the mains can be reconnected so that the battery acts solely as a buffer until it has charged sufficiently to run solo. It also means that if the listener cannot hear a difference between the two settings then he/she may as well leave the mains supply connected which keeps the battery permanently topped up and so improves battery life span. Here there was a slight mains generated hum so I stuck to battery only.

The lover returns and the magic has gone? It's happened before, a manufacturer gets a good review, goes away and tweeks and screws it up. The difference between 'wonderful' and ordinary seems to be tiny and the magic easily lost... Manufactures never seem to have heard the phrase "if it 'aint bust don't fix it..."

So powering up the Niribu I was a little worried. The increased gain was noticeable, better matching hi-output CD players, the cost is a slight increase in noise from the former impossibly high standard, but in this respect it still betters anything else I've had here. No doubt some buyers will benefit from the change, and the manual mains switch might be of use once in a lifetime, but here I was just concerned that the sound quality was unsullied.

It just made me smile :-) The damn thing just opened up my system just like it did last time, it still bettered anything else I've heard and by a significant margin. I'm not going to repeat all I said in the last review, personally I couldn't say if it was noticeably better than the previous incarnation, the memory plays tricks, but if I was forced to express an opinion I'd say the gap between it and my Dynavector step-up/Audionote M3 was even bigger.

The stage remained a fussy beast, just as before it liked being away from my Cd player and on damped support (a turntable shelf in my case though Rudi says it likes a pile of old records in their sleeves). Rudi also claims that the use of a good quality isolating transformer also helps and has designed just such a beast - the Enlil - in an identical casing. I have one here and initial listening looks as though he is right, which is very worrying... A full review of the Enlil will follow in a few weeks.

Then last week a monster CD player came for review and I just didn't have the space for the Niribu. So it was moved 'offstage' and I went back to the M3's built in valve stage. "Groan!" The magic vanished. I've never wanted to finish a review so fast as that CD player (which needs a reported 300+ hours just to break in) so I can get back to the Niribu...

So... A sensible update to a magnificent stage which increased compatibility without screwing anything up. The bad news is that due to a tax raid my hi-fi budget for 2005 is precisely zero (or even involves selling) but Rudi isn't hassling for the Niribu yet so I'm hoping to make the most of it when I finish with the damn CD player...

Oh and one other thing... If you buy this stage (or for that matter any other stand-alone phono stage) try them direct into that T-Amp you have lying around...