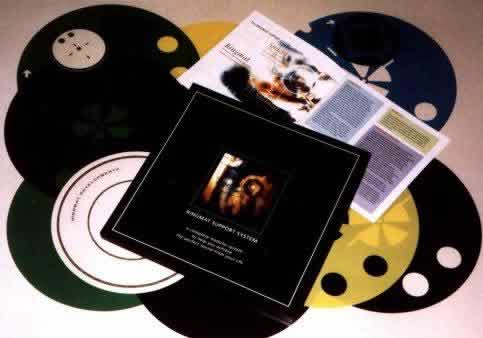 If I hadn't already tried Ringmat's Ringmat XLR and Statmat (see reviews) I probably would have given this a miss it's so weird... Have a look at the 'Ringmat' review and you'll see my conclusions were that on an LP12 or any other deck it has a major cleaning up effect and is well worth the money for what appears a bit of card with some cork on it. The 'Record Support System' takes this idea much further...

The heart of the system is the aforementioned 'Ringmat XLR', but this time in the very neat box you'll also find a series of coloured plastic shims the size of an LP, a thin rubber mat, an 'LP Statmat' and a funny little mini ringmat called a ringcap. In the box you'll also find an excellent little booklet on TT set-up and a colour booklet on how to use the system. I have to say I'm always impressed by the presentation and documentation Ringmat Developments provide which helps sugar the pill of paying 160 pounds for a box of tweeky bits! Don't let your partner see anything until he/she has heard the effect - divorce may follow...

I'll try to describe how to use the kit - first on goes the thin rubber mat, then the shims, then the 'LP Statmat', then the 'Ringmat' , then the LP then the 'Ringcap' PHEW! But it's not that simple! You see the shims have two functions. Firstly they are supposed, by dint of clever cutouts in their shape, to reduce resonances in the LP itself. Secondly, and here there is no question of their worth, they in combination allow accurate, quick and repeatable adjustments to VTA.

Now I'm not going to give a long lecture on VTA*, suffice to say that the Vertical Tracking Angle sets the angle at which the stylus sits in the groove of the LP. With some styluses this is not that critical, with others, particularly line-contact types, a difference of 1/4 a mm in arm height and thus VTA is easily heard. Some enthusiasts (did I say obsessives?) will alter VTA for every disk played. This is because vinyl thickness varies and the original cutting VTA is different depending on the age and manufacturer of the record itself, giving different optimum VTA's. Due to this arms with vernier adjustment of VTA such as Grahams and SME V's are very popular in the US where VTA has become a major issue. Some manufacturers, Rega for example, take the opposite view - that bolting the arm rigidly to the armboard and offering no VTA adjustment is the way to go. However the wrong VTA will increase surface noise, reduce tracking performance and alter tonal balance.

The Ringmat system solves all these problems at a brilliantly simple stroke. Each of the shims is colour coded and a specific thickness. Ringmat give you simple instructions to combine these to bring your VTA to the theoretical ideal. After this by removing and replacing shims you can alter the VTA in 0.075mm increments! Far better than even the best arms. Not only that, it is the work a moment to add or remove a given shim to see it's effect. Then if you want to go the whole hog you can note down the shims used for each of your favourite records. So for example 'The Best of the Bay City Rollers' might need yellow/blue/green (or a wheelie binJ ). Much quicker and more accurate than even the best VTA adjusters and instantly repeatable - with 100% accuracy. As such alterations generally only need the addition or removal of one or two shims it's very easy, though I have to admit that in my case I just set an average.

The second claim for the system is that it improves the sound. In the review of the 'Ringmat XLR' I've already mentioned that in my system the benefits were negligible as my Gyro was designed to be used without a mat. However it was a big hit with my friends LP12 and so clutching the box and a handful of skepticism I set off.

My friend already has a 'Ringmat XLR' purchased after the last test, so he was keen to hear the 'Full Monty'. He also greatly appreciated the easy VTA adjustment as his Ekos is more difficult to adjust than my SME IV. We spent hours fiddling about swapping shims and records and 'LP Statmats' et al. Our conclusions were as follows. First the 'Ringmat XLR' is an essential fit for a pre Cirkus LP12 - but we knew that anyway. Second the shims/rubber mat added slightly to the quality of the music, they seemed to take further the 'Ringmat' effect, a slight clearing of the sound and increase of low level detail. The improvement was slight, nothing like as much as the improvement the original 'Ringmat' had made. With the 'LP Statmat' and 'Ringcap' we really couldn't spot the difference. Perhaps over a period of weeks a feeling of contentment might accrue but I'm not convinced. What did emerge from the test was that by the end of the afternoon the LP12 was sounding considerably better than before, much of this down to the fact that we ended up with both a lower VTA and lower tracking force than before. It would have taken days with an Allen key and a lot of swearing to get to the same point. And yes we did start using an extra few shims when playing 180 grm releases - it's a terrible affliction isn't it!

Here we have an innovative and very effective produce. If you find VTA adjustment important the 'Record Support System' could well be for you. It certainly doesn't lower sound quality and in most systems will raise it, particularly if you have a TT that uses a felt or rubber mat as standard. Usually with tweeky products there is an easy and cheap way of DIYing the same effect. Sadly in this case you'll just have to shell out the cash!

(*) Please note that during this article I refer to VTA as mm changes in arm height. Obviously this is incorrect as VTA is measured in degrees, however as all arm VTA adjustment is done in mm and the shims are in mm I've taken the liberty.