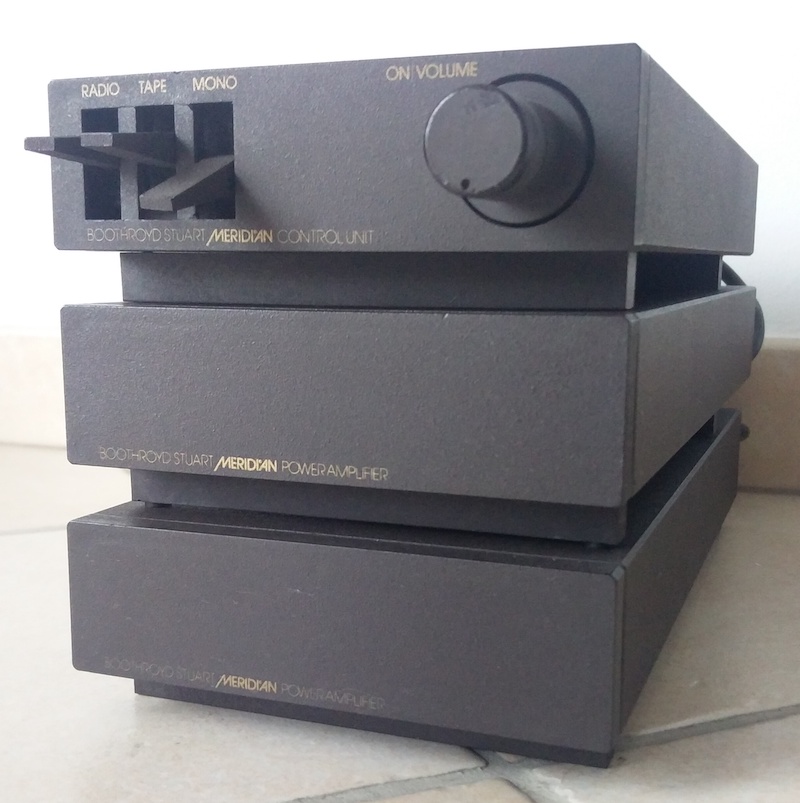 Meridian Audio Ltd was founded by Bob Stuart and Allen Boothroyd in July 1977, albeit they started working together since the early 1970s, designing the famous Lecson Audio product line, which is on permanent display in the New York Museum of Modern Art and for which they won their first British Design Council Award in 1974. The second British Design Council Award arrived in 1982 with the 100 Series I'm about to review. Meridian's first product, though, was the M1 active loudspeaker, perhaps some of the first active loudspeakers (called “interactive”) specifically designed for domestic listening. Before the M1, we shouldn't forget the Philips MFB (Motional Feedback) loudspeakers, the RH 532 in particular, released in 1974. Piet Gouw, product manager at Philips, was responsible for the launch of most of the revolutionary Motional Feedback loudspeakers. But I digress, this is another story.

Let me return to the Series 100 by Meridian. The design of these components was revolutionary at that time! It consisted of a preamplifier, called “control unit”, the 101, two different power amplifiers (the 103 and the 105), a power supply (103.5) and the 104 tuner. The 101 preamp was a modular design, with boards that could be easily unplugged and upgraded by the end user (more or less like in the Naim NAC 12 preamp). Twenty different types of MM and MC boards were available, for fine cartridge matching. The preamp also had two line inputs, labelled TAPE and RADIO. A mono switch was also available. The volume pot acted as a power on switch as well, while the balance control was coaxial. Of course, the 101 was the perfect preamp for the M-series active loudspeakers.

The unit under test is a 101B, where B stands for “balanced”. This revised version of the 101 included a balanced output module (it can be seen in the pic below), a redesigned motherboard and gold-plated RCAs for phono input (DIN for radio and tape). Moreover, electrolytic caps were removed from the signal path and replaced with tantalum/metal film ones.

Having a look at the inside one can't help but notice the extremely clean and neatly-designed circuits and layouts. The 101 preamp is a work of art! The 103 power amp used, like the Naim NAP120, two pairs of BDY56 transistors, while the PSU relied on a good toroidal transformer and a pair of ITT 6800uF electrolytic caps. Connecting the three units together is not exactly straightforward, but the markings in the rear panels clarify everything. Considering the power amp chassis acts as heatsink, it is better to place it alone, so to avoid excessive heat buildup. In case of overheating, there's a thermal protection that kicks in, as it can be seen in the picture below. The power amp uses ugly push-type binding posts, hence just moderately thick bare wire is allowed. 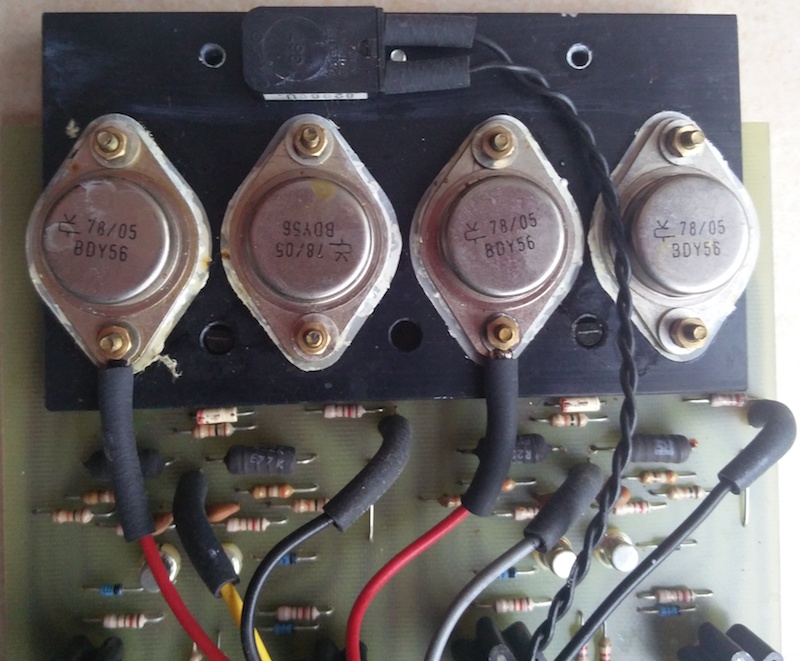 The units under test are almost in mint condition (even the original boxes were available) and belong to my private collection of vintage HiFi components. They work flawlessly and, prior to this test, have been carefully cleaned and deoxidized. Having been built in 1978/1980, more than 40 years ago, it is amazing to see how they've survived so well. 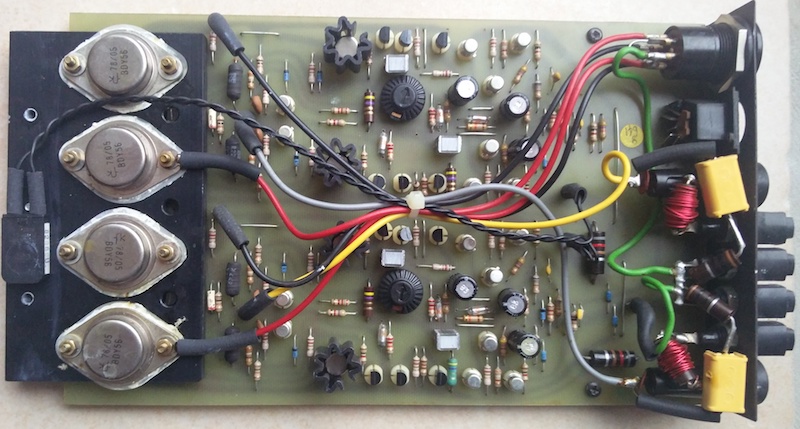 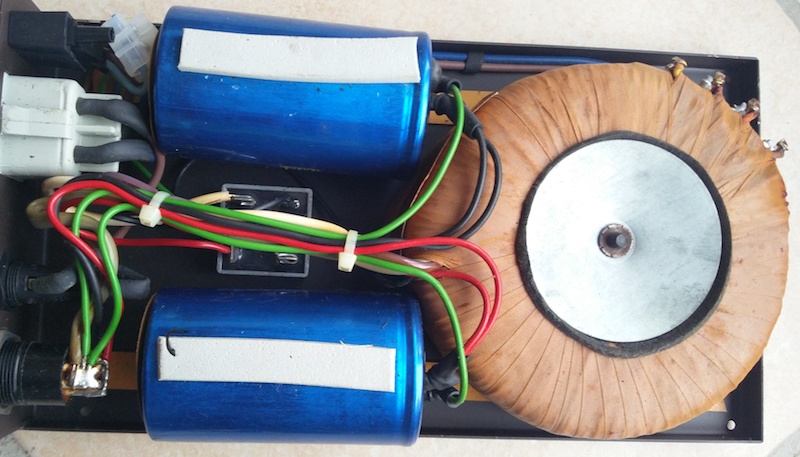 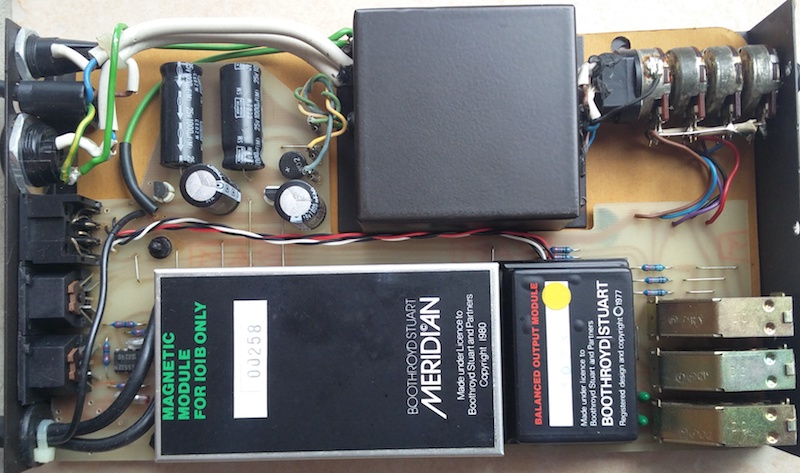 This vintage Meridian combo looks and sounds incredibly modern! There's no trace of that fluffy, muddled, “warm” and blurred sound of many vintage amplifiers. Instead, the sound is clean, well-controlled, articulated, precise. I can't avoid comparing these components to another vintage pair I've recently reviewed (Naim NAC12 & NAP120). Well, globally, the Naim pair sounds better, to my taste, with a more linear presentation. The Meridian 101/103 has a kind of monitor sound, like some classical British bookshelf loudspeakers. The sound, compared with the Naim pair, is dry, maybe even sterile and bright at times, with a more evident presence effect, that was also noticeable on the 12/120 combo. Voices and strings are very clear and sound a bit forward. Not exactly an unpleasant effect, but I'd avoid loudspeakers with the same characteristic, just to be sure.

The bass range, though not particularly deep in the first octave (more or less like the Naim pair) is powerful and controlled, though not as good and involving. In terms of PRaT (Pace, Rhythm and Timing) the Naim pair wins hands down. Generally, the Naim pair sound is smoother, as it flows naturally and it is also full-bodied, while the Meridian pair sound appears to be a little bit electronic. More “HiFi” perhaps? Certainly the Naim pair has a harmonically richer top end.

Dynamically, these two pairs are very similar, and this shouldn't be a surprise, considering they both use the same power transistors. The Naim pair has a little advantage, some extra headroom, thanks to the beefier power supply caps (10,000uF instead of 6,800). In some sense, the Meridian pair runs out of steam sooner. I'm pretty sure adding another power supply things could be reversed.

The area where the Meridian pair wins hands down is soundstaging. The 3D image this preamp/power amp combo creates is wide and deep, certainly better than the Flat Earth presentation of the Naim pair. Singers and instruments are evenly spaced, creating an area which appears to be proportionally realistic and well focused. Depth and height of the virtual image can rival some good modern amplifiers.

Unfortunately, in my opinion, this is the only area where the Meridian pair sounds better than the Naim pair. The amount of physical and emotional involvement that you can experience with the 12/120 combo belongs, definitely, to another league.

As said, since the power amplifier has a cabinet that acts as heatsink, place it far from any other component. At high listening levels it becomes pretty hot. Place the PSU as far as possible from the power amp and the preamp, in particular. Before connecting to the mains, deoxidize every connector, plug, switch and potentiometer. Also, unplug the boards in the preamp and plug them again into place a couple of times. The 103 power amp has just 35 watts per channel, but can drive heavy loads and has lots of dynamic power. Anyway, especially with heavy bass tracks, it is not impossible to hear it running out of steam. If that's the case, turn the volume immediately down. The pair has a kind of monitor-like sound, I'd avoid loudspeakers with the same characteristic or you will wonder where the bass and the highs are gone.

The three cabinets are extremely stiff and there are no rubber feet that can dampen vibrations. After inserting good damping feet (such as Vibrapods, Isonodes etc.) the sound improves a little bit, especially the mid range sounds smoother and less dry.

The 101/101B preamp is not impossible to find, and normally sells for something around 250/300€. If you can, search for the 101B rather than the older 101 version. The 103 or 105 power amps are harder to find and normally cost a little bit more. A pair 101/103 can be found for 600€, more or less, depending on conditions. I haven't seen a significant increase in price in the last 20 years. When purchasing, be sure the original cables are included, as the umbilical cord between the preamp and the PSU is not standard. If manuals aren't available, no problem, as they can be downloaded from the Meridian-audio.info website, together with pics, service manuals, diagrams and brochures.

This 101/103 pair was definitely ahead of its time, both aesthetically and technically. Extremely well-made and designed, these units can look modern even by today standards. Soundwise, they are dynamic, precise, clean, with a solid, tight bass and good punch. A bit dry, perhaps, and not exactly emotionally involving. In some sense, they remind me of many modern amplifiers, which are precise and detailed, but lack true emotional excitement. For sure, you wouldn't believe they are more than 40 years old!!!