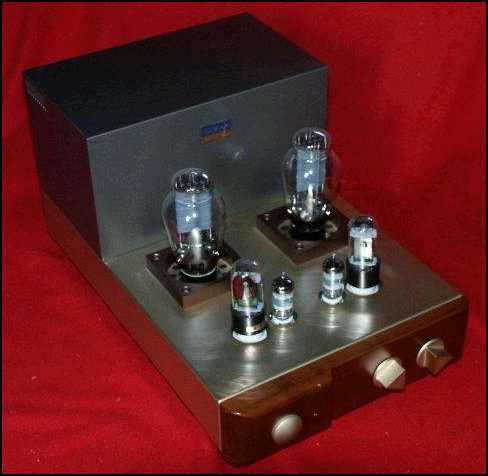 So here we have the third in the run of 300b amps I've managed to wrest from manufacturers clutches with the aim of seeing the capabilities of the breed (and helping myself decide on my next upgrade:-)

Wavac are a Japanese company and have been a long time in the valve amp business, one of the pioneers of the single ended 300b revival. As you'd imagine they make some terrifyingly expensive amplifiers, but this is one from their 'budget' range at a mere 6500e (approx). A shed load of money as far as I'm concerned:-)

Contrary to appearances the amp is not a true integrated, it has no pre-amp gain stage. Better to view it as a power amp with adjustable sensitivity - an idea used by quite a few power amp manufacturers including the Audion ETPP EL34 monoblocks I used to own, and their Silver Knight 300b Monoblocks I have here on test. This ability means that sources with healthy outputs can be used direct without a pre-amp. The Wavac adds a three-way input switch which means that three such sources can be accommodated bringing it even closer to a true integrated. Best to think of it as a power amp with a passive pre-amp thrown in.

The amp looks pretty conventional with a bent steel case and transformer cover, both well finished and with good 'shut-lines', but we're certainly not in Loth-x ji300b territory here. There's a nice piece of stained wood at the front to lift things and the selector and volume knob are unusually triangular in shape. There is a large on/off button so the thing doesn't need to be left on all the time (no burnt hands fumbling for a switch on the back) and a small LED to show the thing is working. Speaking of lifting things, the amp weighs in at 17kgs, pretty lightweight for a 300b - about the same as one of the Audionote Quest Silver monoblocks. Round the back are the RCA inputs and one pair of banana sockets, all reasonable quality, along with a DIN socket marked "pri-in". Apparently this was intended as an umbilical for a phono stage that has never appeared - strange...

Transformer design is critical with SE amps and the Wavac uses an in-house design and the circuit is likewise unique to Wavac. Input valves are two pairs of ECC81/12AT7 and the amp came supplied with Svetlana 300b's, a fine choice in my experience. There is also supposed to be extensive filtering of incoming AC to reduce noise and I have to say that if so it certainly works because the Wavac was by some distance the quietest 300b amp I've had here, rivalling my old Audion EL34 PP's. For the month I used it it never made a click, pop or hum which puts it in a class of its own. As my Loth-x Polaris are about as efficient as its possible to get, this near transistor silence was very welcome, though bought at the price of much lower sensitivity that the other power amps here. 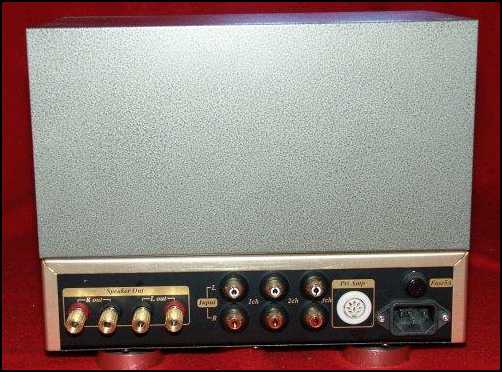 As already mentioned there are two ways of looking at the Wavac. Either it's a 'pseudo' integrated or its used as a power amp. I used it in both configurations, the former driven direct by the AudioNote Solo CD/DAC (and sometimes Audiomeca Enkianthus) or from the Graham Slee Gold/Elevator phono stage fed by my Orbe/SME/DRTs-1 front end. Later the Audionote M3 preamp was drafted in (though my old Audion Premier 2 put in a brief appearance).

The comparison was interesting. First it's worth noting that the Wavac, when used as an integrated does have a big advantage over simple 'passive' pre's as it eliminates one set of leads and plugs, something passives are particularly sensitive to.

Straight off it sounded balanced within my system - much more so that the Ji300b. Sometimes the switching on of a new component is followed by a search for interconnects and the shuffling of speaker cables and positioning whilst I try to get something well balanced. Sometimes, as in this case, I was quite happy to sit down and listen to music. The sound was seamless from top to bottom, both ends well represented. In direct comparison with my M3/Quest Silver combination (at twice the price) the sound was a little 'flat', lacking in tonal colour and 'joie-de-vivre'. Both micro and macro dynamics left a little behind. There was also a certain looseness to the presentation, it's tough to describe but the AN combination made things hang together better in both time and space. This focus in particular was given to the Wavac, when instead of being run direct it was hooked up as a power amp using the M3. For this the gain of the Wavac was wound up to max to bypass the volume pot (a proper 'bypass' switch would have been nice), something the amp's quiet background was quite happy with, unlike the Audion Silver Knight which was simply too noisy to be used this way.

Driven by the M3 things became a lot closer, as one would expect when effectively doubling the cost of the amplifier. This improvement in both focus and dynamics is a mark of a fine pre-amplifier with gain, and you'll just have to put me in the school of thought that puts most 'passives' down as cheap alternatives to the real thing...

N.B. - At full gain the Wavac was still considerably less sensitive than the Quests, and when used as an integrated with lower output devices like phono stages the amp needed a pre in order to go to full power.

So for the rest of the test, and in the interests of fairness the Wavac was used mostly via the M3. However don't go away with the idea that the amp doesn't work as an integrated - it does, and very well in most situations. In fact I preferred it to the Loth-x, mostly for tonal reasons, despite the fact that the Ji300b is a proper integrated. It's just that to show its full capabilities it needs a top pre-amp and so that's what I gave it.

Over the last few months I've begun to understand what the SE crowd have been banging on about all these years. The 'hear-through' midband that good examples of the breed possess is unmatched by anything else in my experience. Their portrayal of ambience, the feel of a hall or recording studio is a whole new experience to me. "Artifice!" I hear you cry, but if so then it's an artifice that only applies to some records and not others, which of course is impossible. No, if a record has that space, either artificial or real, recorded in its grooves then a good 300b Se amp will pick it out. This is where the Quest Silvers excel and if I were to mark them as a 10 in this respect the Wavac would run to a 8, the Audions - 7, my old EL34's - 3.

What am I talking about? It's the space around a drumkit - the sound of the skin of a snare, the difference of a brush to a stick. The wetness of the reed of a sax, the resin on a bow, the 'ringing' of a Telecaster, the breath of Billy Holliday. It's the sound of the back wall in 'Take Five'.

I have a CD that was distributed by the New Internationalist called 'One Voice'. It's a collection of mostly acapella music from round the world. One track is 'My Dawn' sung by pearl fishermen in Bahrain. It is recorded outside. No echo. No reverb. No ambience. It is just so OUTSIDE through the Wavac. If your listening room will support this sort of thing you can close your eyes and hear that there is NO sound coming back from the environment - it feels like you are on top of a hill. For those with more mainstream tastes try Michelle Shocked 'Texas Campfire Tapes'. These were recorded by a journo on a Sony Walkman (with terrible wow!), and you again feel the infinite size of the studio.

With ambiant information to burn the Wavac produces a big open soundstage with real depth and solidity. Though some amps will spray a wider soundstage across the back wall, few will match the realism of the Wavac, one other vital step in the quest to 'be there'...

This sort of insight is pretty pointless if you're planning on leaping about to Nirvana, but the Wavac is quite happy to oblige here too. Given sensitive speakers volume is not a problem and the simplicity of an SE helps everything hold together so naturally. Contrary to what you might think, this timing is critical for even/especially the hardest rock. The biggest single difference between a 'pro' group and an bunch of amateurs is how 'tight' they are. A system that doesn't time destroys the distinction.

Critics of SE amps like to point out feeble uncontrolled bass and shy treble. It's not a view I hold and I'd put the myth down primarily to inappropriate speakers (and some poor SE amps). SE's generally lose power at frequency extremes or when speaker impedance drops. Given efficient speakers which leave miles of headroom at both ends of the scale and a benign impedance curve the problems don't arrive, here the Polaris let the Wavac show it's true colours. Cymbals shimmered appropriately, - lacking the fizz of some transistor designs which can exaggerate the effect. The bass end was deep and satisfying though without the ultimate resolution of the Quests.

But overall the abiding impression was one of thorough competence across the frequency range.

Taken as an integrated the Wavac makes an extremely strong case for itself. It is sensitive enough (just) and its overall performance would embarrass many 'pukka' integrated amplifiers. Run this way it is likely to be sensitive to both cabling and sources, but if properly matched it's an amp that I would very happily live with. Beyond that of course it allows for a painless upgrade by simply putting a proper pre-amp in front of it, in this configuration it becomes a very fine power amp in its own right. The snag is that it needs to be a very good pre to significantly better its performance as an integrated and I'd start looking at the Korato KVP10 or Audion Premier 2 as a minimum with the Audionote M3 as an even better, and considerably more expensive alternative. After all if you are a vinyl junkie (and if not why bother with a 300b) you'll need a phono stage, so why not go the whole hog and get a proper Phono pre?

Looked at purely as a power amp I have to say it comes second to the Quest Silvers. It's not a question of system synergy as they have similar balance, it's just that the similarly priced Audionotes put that little bit less between you and the music. Against that the Quests are noisier to the extent that if you need an absolutely silent background when not listening to music the Wavac rules the roost.

But to sum up my feelings on the Wavac I'd have to simply say it is a 300b SE amp without tears. It's reliable, quiet, flexible, has an easy upgrade path and comes from a well established company with a fine track record. If you've always wanted to see what all the SE fuss is about but have been put off by the horror stories then I can't think of a better place to start. If only it's price was entry level too...