In the Eighties, after the famous NAD 3020 integrated amplifier shocked the market with its stellar quality/price ratio, many HiFi Companies started to design high quality, low powered amps that tried to sound as good. Even NAD released a more audiophile edition of the classic 3020, namely the 3120. Besides other small differences, the 3120 had no tone or balance controls. After the 3120 became one of the most desired integrated amps of its time, the competitors decide to release models that followed the same minimalist “less is more” approach, namely, no tone controls, no balance, just an input selector and a volume control. While competitors of the original NAD 3020 were the Proton 520, the AMC 3020 (designed by an ex-NAD engineer), Rotel 820 and 920, their minimalist audiophile versions were the competitors of the NAD 3120: Rotel RA820B and Proton 520B.

The usual “big boys” (Pioneer, Marantz, Yamaha, Sansui etc.) seemed uninterested in following this minimalist “audiophile” trend. Hence, it came as a big surprise when Yamaha released this A320! No tone controls, no balance, just an on/off switch, 6 input selection switches and a dual volume knob! Moreover, it was claimed to have a high dynamic power stage, a low noise MM phono stage and the capability to drive low impedance loudspeakers. And that “20” in its name was a clear sign of inspiration to the xx20 competitors. Actually, what does that 20 stand for? Originally, it was the power output into 8 ohms of the NADs! We reviewed the original NAD 3020 several years ago and the NAD 3120 more recently, evaluating the mods applied by Fidele Audio.

Now, while the other NAD competitors had their own moments of glory, the Yamaha A320 had never been taken into serious account by audiophiles. Time has come, after 35 years, to give the A320 all the attention it deserved, as a pretty unique amplifier in the history of the Japanese brand.

The volume pot is a double ALPS 50KAX2, and there's almost nothing else inside, as you can see in the pictures. Oh yes, there's a good quality, low noise phono stage, with gold plated RCA connectors and a headphone socket. Finally, a nice touch of finesse is the use of copper screws throughout on the circuit board. Moreover, two strips of damping rubber glued to the power supply transformer act as a vibration absorption interface for the top cover.
Neat!
Summarizing, this is a minimalist, high quality design, even “oversized”, if you consider its low power output.

Considering how much effort has been put into designing such a good quality amplifier it is rather odd the speaker binding posts are the flimsy push spring loaded clip ones which were/are commonly used on commercial cheap amplifiers! There's no way to use thick wires, forks or bananas. You need to use banana/pin adapters, at least. The power cord is of the fixed kind, so if you wish to experiment with different power cords you need to install an IEC socket. 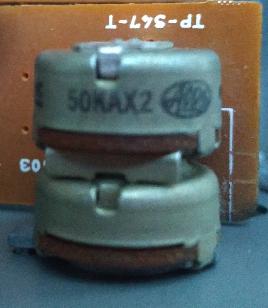 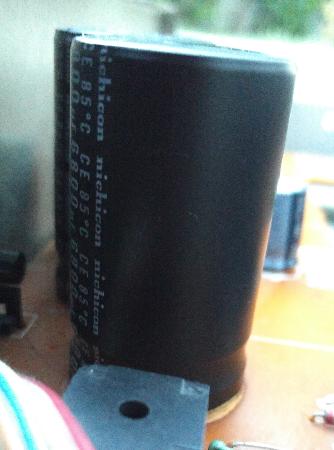 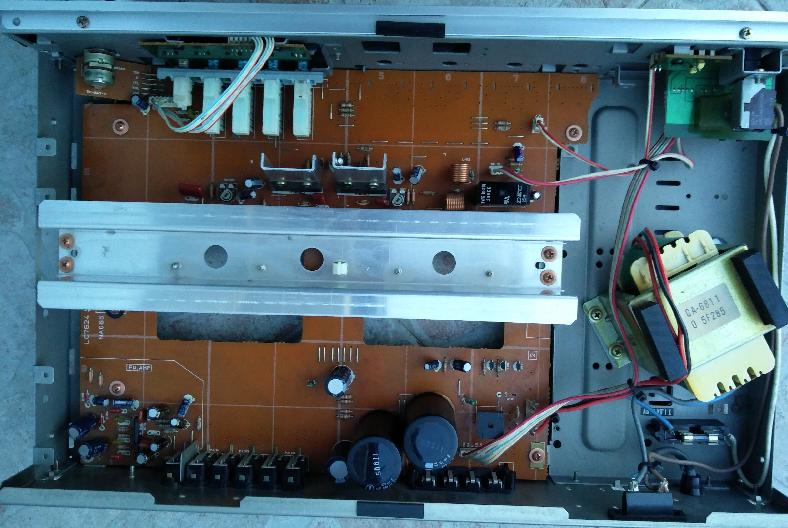 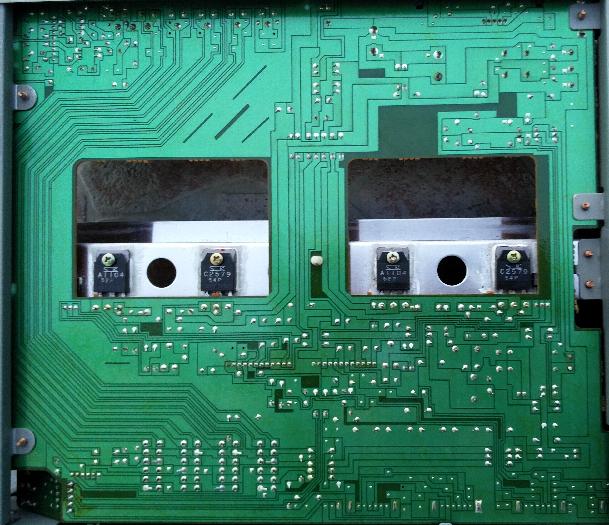 The following notes are related to a 100% original (not recapped) A320. Of course its real performance can be bettered by replacing the power supply caps, for example, with new, fresh ones. The reason why I didn't recap it before listening is because I wanted to give you an idea of its sound after more than 30 years. I am quite familiar with the sound quality of the original NAD 3020/3120 amplifier (I own both) but I also tried to compare this A320 to similarly priced Class D modern amps such as the Dayton DTA100 and the Nobsound NG-01/Mogu F900S I reviewed a couple of weeks ago.

I've never been a fan of Yamaha components, especially amplifiers and CD players. Their Natural Sound claim always sounded a bit bold to me, since there was always a trace of dryness that made me think of some kind of electronic sound rather than natural. In any case, this A320 was a completely different beast: how could they go wrong with something so well designed and essential? Indeed, this small and forgotten amplifier is special. Its sound isn't clinical, not dry or cold. First of all it has a bass range to die for: powerful, deep and dramatic when required. Certainly, it doesn't sound like any standard 30 watt amplifier.

The sound is bold, big and solid. And the most entertaining thing is that the sound gets bigger as the volume goes up, instead of becoming compressed and dynamically challenged. The high power output power transistors (claimed to dissipate 100 watts per channel) are certainly oversized for the task, and this means there's enough headroom to cope with the highest demands of bass and dynamics. Secondly, there's a huge (with respect to the rated power output) energy reserve, made possible by the big Nichicon 6800 uF power supply caps. The result is an amplifier that invites you to crank the volume up, no matter what your neighbours might say. The sound possesses a natural pulse that makes your feet stomp incessantly. Entertaining, to say the least. This gift is definitely welcomed when playing pop and rock tracks, especially.

The mid range is clean, with low distortion on voices and strings. Some slight trace of dryness might be audible, from time to time, and certainly this amplifier can't be defined euphonic. The same character is shared by the high range: not exactly rich in harmonic content, it simply gets the job done, with precision, low distortion levels and almost non-existent harshness. I was expecting a bright mid-high range but this A320 proves my prejudices were wrong.

Dynamically, this amplifier is a power station. It sounds loud and authoritative, much more than you'd expect from a 30 watts per channel inexpensive amplifier. Moreover, it drives even tough loads with ease! It possesses PRAT (Pace, Rhythm and Timing) in spades. Punchy, fast, controlled, dramatic when required. It can control woofers with authority, with no trace of distortion even in the lowest notes. Playing rock or symphonic traces is an extremely entertaining experience. More than once I forgot to take notes and started changing discs, one after the other, just for the joy of listening.

Things become a bit challenging when it comes to examine its soundstaging abilities. Unfortunately, the stage it creates is mostly flat, well developed horizontally and vertically, but with almost no sense of depth. This is very strange and might depend on the age of the components inside. As I said, this amplifier has never been serviced or recapped. If you forget the depth of the image, the soundstage it reproduces is reasonable, with stable contours and an acceptable clear focus on instruments and singers.

Summarizing, this is an amazing performer, even by today's standards. It is an entertainer, with strong and controlled bass, amazing dynamics, low levels of distortion and a mostly neutral (a bit dry, I admit) tonal balance. The natural competitor, my NAD 3120 (recapped and tweaked) is slightly more refined in the mid-high range and has a better imaging. The voices are more natural and, overall, there's that harmonic richness that the A320 lacks. On the other end, it is not as rhythmic as the A320 and the bass range is slightly less powerful. In a few words: the 3120 is more transparent and precise but less entertaining.

As already pointed out, the speaker spring loaded clips are horrible and definitely out of place in such a well designed amplifier. A real shame. Stock feet are extremely cheap and should be replaced. Soundwise, this is a very fine and competent performer, which sound above any expectation. That said, its soundstaging performance is poor, to say the least. Top end refinement could be better, in terms of harmonic content.

It is so simple and essential that there are few things that can need a replacement, except power supply caps. Thankfully, power output transistors are still available. New speaker binding posts, feet and power cord should be the first place to start a tweaking session. Considering the age, some deoxidizing spray on the input selectors, volume pot and power supply fuse contacts is almost mandatory.

This amplifier is a rare bird. It is not easy to find in the second hand market as it wasn't exactly a best-seller at that time. Sometimes they pop up on Ebay and the asking price is highly variable. If you're a fan of the “less is more” philosophy you should put this gem on your wish list.

This A320 deserved much more consideration during its time. It was (and still is!) a fine and consistent performer, with a highly dynamic, powerful. coherent and lively sound. Probably not as musical and gentle as the NAD 3120, but more muscular and involving. It certainly deserves a very special place in our Jurassic (S)Park!