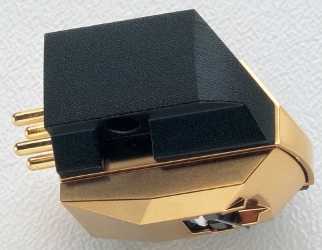 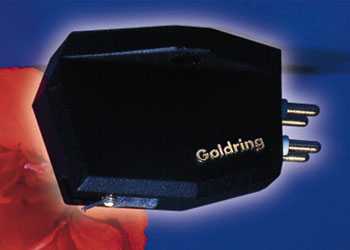 If you were to ask the vinyl cognoscenti about how to select a good cartridge, you would probably receive a variety of opinions (enough to make you wish you had never asked). But some of the common features that many would uphold would be "low-output MC", "boron cantilevers" and a "sveltly shaped stylus" (that would easily nuzzle into the goove). Well, the AT OC9-MLII certainly hits all three of those bases, and at a price much lower than any other cartridge with the same features (atleast to my current knowledge). Also keep in mind that the original OC9 had an MSRP of $700 USD, the new MSRP and is considerably lower and the street price lower yet.

The Goldring Elite is also a low-output moving coil cartridge which incorporates a Pocan body and a Neodymium magnet. The stylus is a Gyger 1 line contact designed to provide maximum groove contact. Silver wire is used for the coils.

So we have two contenders with very impressive credentials and high-fallutin' sounding features. Now, here is when this audio stuff gets tricky. Just because a product incorporates all the "right" attributes that are en vogue, it does not guarantee that its performance will be as good as is implied by those attributes. This is where a good listening comes into play, and cannot be substituted for...so on with it.

Most of the tests below are representative of what I generally experienced over many tracks. It is very important to clarify that the tracking and resonance experienced with the AT cartridge in this setup is a bit unfair, this cartridge is better suited to a slightly lighter arm.

"Slip slidin' away" (Paul Simon; Greatest Hits; Columbia; JC35032)
My copy of this song is my favourite extreme test for tracking, since it has a set of pretty significant scratches running across it. The Goldring Elite, which I consider a champ in this regard is the only cartridge in my experience that can sucessfully track my copy of this song without skipping or getting stuck. The Audio Technica did skip and get stuck, and that is what I would expect from pretty much any cartridge. My conclusion here would not be that the Audio Technica is poor at tracking, but rather it is not quite the champ in this regard that the Goldring is with this arm. Again, a lighter arm would level the field between the two cartridges to some extent.

I should also point out very clearly, that this should not be a significant consideration for anyone in the market for a cartridge, unless for some reason you intend to play lots of heavily scratched records (!!!?). With the Goldring, it simply is an extra nice-to-have ability. It does come in handy, for those albums where some tracks may be heavily scratched and you still want to listen to them (at least till you can get your hands on a cleaner copy).

"Take me to the Mardi Gras" (Paul Simon; Greatest Hits; Columbia; JC35032)
Another track I use because of its low quality sound, in this case it is poorly recorded with an excessive of sibliance. The AT tended to make the sibliance and other HF detail seem a little more prominent, when compared to the Goldring. In general, the Goldring had what seemed like a relatively warmer and more balanced presentation, whereas the AT seemed a bit more tipped in the upper regions with a cooler sound. I could be all wet, and in reality the AT may have had a flat and balanced response, and the Goldring could a shelved down in the higher octaves; but subjectively it did not sound that way to my ears.

"Flamenco Sketches" (Miles Davis; Kind of blue; Columbia; wpc-3163)
There were slight but definite difference in the spectral balance between the two cartridges. The bass response had more weight and could be felt as much as heard with the Goldring, only in direct comparison did the AT lack in this regard and only by a very slight margin. The reproduction of the piano via the Goldring also seemed comparitively fuller and warmer. Unfortunately, I have no way of saying which of the two had the more "correct" or true to source performance, but I did prefer the Goldring on this track.

”Cartridge/arm resonance test”(Hi-fi news analog test lp)
The AT resonance peaked at 5hz, whereas the Goldring peaked at 11hz. While the Goldring is well within the acceptable range, the AT cartridge in combination with this arm is below what is generally considered the acceptable range (8-15hz). The expected impact would be that this system would be very sensitive to rumble and vibrations in the 5hz region (on warped records). However, I did not hear any such artifacts even when using the ”Residual system noise”(Hi-fi news analog test lp) track and stomping on my suspended wooden floor (to test for resonances); or spinning my most warped LP (to test for rumble). I suspect some credit may be attributable to the previously reviewed KAB-Technics SL1200 MK2 table. I specifically suspect the tonearm damper for supressing rumble, and the suspension and constrained-layer chassis for supressing the resonance of my deliberate thumps on the floor. Again, a lighter arm would level the field between the two cartridges to some extent.

”Residual system noise”(Hi-fi news analog test lp)
Both cartridges were about equally quite when you equalize for the difference in their respective output levels.

”Tracking ability - Bands 1,4,8 Side B”(Hi-fi news analog test lp)
Again, both cartridges tracked equally well on all 3 tests, and neither balked at the third and toughest track.

In absolute terms I do prefer the Goldring Elite. On very specific instances the AT did seem a bit more detailed and alive, but I suspect the response may be intentionally tipped up in the HF region; this can often give the impression of a component being more "detailed" than it actually is. Of course, these is a price to pay here. On badly recorded pieces where the HF is inherently bright the result can range from somewhat fatiguing to very sharp, as I experienced on some instances with the AT.

In absolute terms the AT is a very good performer, but there were things that the Goldring did better (as it should at about double the price). However, it is very important to understand that the improvements were of a very small magnitude and disproportional to the increase in price (as should be expected of all things in life). Thus, I feel justified in categorizing the AT as an excellent value.

If there is one thing I really do wish for, it is that the response was more "balanced" and not as seemingly upped in the HF as I had perceived. Had it not been for this shortcoming, I would have been even more enthusiastic about it.