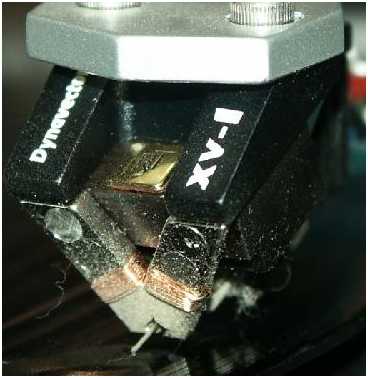 When I contemplated starting a series of hi-end turntable tests I decided that one essential component would have to be a high-end cartridge. To review turntables costing up to and even over 10,000e with a 400e moving coil might be relevant, but would leave a whole host of questions unanswered. Arm twisting swiftly followed and Dynavector exceeded my wildest hopes by offering their flagship cartridge the DRT-1 for the tests. Terrifyingly expensive and "difficult" in both size and weight this exotic has played a vital part in the tests. Believe it or not, in the last 12 months, when the tt reviews have been running, I've put over 1000 hard hours on the thing. It's also been swapped back and forth, adjusted a million times, and all the other things that make owners of such cartridges wince.

But as with all such devices its life is limited, to paraphrase a well-known (and sexist) saying - "nothing is more depressing than the effect of time, on the performance of a high-end cartridge".

1000 hours is, sadly par for the course for any decent cartridge, and though I tried to ignor it there started to be a slight fluffyness to the sound, especially on inner grooves.

Mid way through the turntable tests this was not ideal so I sheepishly contacted Dynavector who, bless them, said to just send it back and they'd do a rebuild. When you consider that you could buy my SME IV for the cost of such a rebuild you can see why I was sheepish, and grateful.

But what returned wasn't the DRT-1 but a different cartridge, the new, improved, "washes-whiter-than-white" DRT-1s, the new flagship.

I have to hand it to Dynavector, they've sent me several cartridges over the years, and though my reviews have been generally very positive they are certainly not 100% praise and ask some quite hard questions at times. But Dynavector have continued to support what I do, and for that I'm grateful - freebee cartridges for reviews is something of standard practice for hi-fi reviews nowadays and it's something I'm uncomfortable with. The manufacturer in effect gives away a second-hand cartridge, which they probably have no great need for after the review. The poverty stricken reviewer ends up with a supply of decent cartridges, which he/she needs in order to do reviews properly. Before you cry "buy your own!" I'll say that that is what I used to do, but reviewing is hard on cartridges and in the space of 18 months both my own cartridges died for the cause, originally from wear and finally from lost channels due to constant pushing in and out of pins. That cost me over 1500e which by the standards of the DRT-1 isn't a lot, but it was a lot for me to spend on TNT. The other point is that I can't afford to buy three different cartridges that I don't actually need, but in order to do turntable tests properly I need an exotic (the DRT-1), a decent but typical high-end MC which is less demanding on arms (the XX-2) and a top high-compliance cartridge for use with low-mass arms and for testing bearing quality and unipivots (the Music Maker).

So I've accepted such loans (and I consider them loans, I will never sell them) but made it plain to TNT readers that that is what I'm doing. In an ideal world Lucio would be an eccentric millionaire who would supply his contributors with full sets of hi-end review gear. But he isn't and he doesn't. And whilst we're on the subject the same applies to all those famous reviewers out there, but they don't tell you about it do they;-)

The quid-quo-pro is that manufacturers are theoretically in a position to influence reviews - and on that point I'll make it clear that the second any manufacturer does such a thing with any loaned items they'll go straight back home. But neither Dynavector or 'The Cartridge Man' have even questioned my reviewing so all praise to them. I would also never accept such a loan 'pre-review', i.e. if a manufacturer said "we'll send you this 5000e cartridge and you can keep it - now what about the review?". No they get reviewed for good or bad first.

Which in a roundabout way gets to the point... You see, when I reviewed the XX-2 my main conclusion was that it was very close to the DRT-1 in performance at half the price and for most people the extra wasn't worth it. This isn't the sort of thing manufactures like to hear of their flagship products - yes the DRT-1 was better but personally unless money was no object the XX-2 got you nearly all the way there.

I relate this tale because I think it supplies their logic in sending back the new DRT-1s in place of the DRT-1, would the new flagship have more clear-blue-water between it and the XX-2?

I think it's essential that you read the original review of the DRT-1 because it'll save a whole lot of typing. The DRT-1s is obviously an update on that cartridge, not a new design at all. Apart from a few details everything is the same save for the replacement of the red plastic block with a lump of ebony. The use of wood in exotic cartridges has a long and illustrious history, quite why it is so favoured I can't say but it certainly changes the otherwise distinctive appearance of the DRT-1s.

Ah but the 'devil is in the detail'. Though primarily the same design, improved manufacturing techniques have meant that tolerances and clearances have been tightened up all round resulting in a more even and concentrated magnetic field around the coils. As much of the difference between a mass produced cartridge and an exotic is down to such details, the fact that Dynavector have been able to make a significant improvement looks good news all round.

OK I was surprised. The DRT-1 seemed as good as it could get, but the 's' just moved the goalposts. To the solidity and unflappability of the DRT-1 the 's' added another layer of ambient detail, a touch more top end extension, but most importantly, and for the first time even in my system, I couldn't identify the position of the stylus on the record.

I'll explain - briefly. Because a pivoted arm sweeps an arc rather than running parallel to the grooves like the original cutter, it will only be perfectly aligned at two points on the disc - generally near the beginning of the record and towards the end. The worse misalignment and therefore the highest level of distortion will be around half way through the record. The more worn the record/stylus, the more difficult it is for the cartridge to extract the information from this point of the record. On many records I can hear the moment when the cartridge is having to work hard - when your system is so close to perfection the tiniest error irritates. Yes you really have to listen for it but it's just not quite as good as those first couple of tracks on a side.

Then at the end of the record, the speed at which the groove passed slows, and the result is that the grooves get concertina'd together. For the stylus a gentle slalom becomes a viscous switchback. As well as being difficult to negociate the 'pinching' of the corners means the path the stylus follows is more 'rounded', it's called 'tracing distortion' and audibly the result is a flattening of dynamics and loss of detail. Exotic stylus profiles are primarily designed to sweep right into those awkward corners - but here again you can hear the fidelity fall.

These problems, given a top cartridge like the DRT-1 or a fine tracker like the Music-Maker drift into insignificance, but with the DRT-1s I just couldn't hear them. Where a CD wins is that end-to-end consistency, but not against the big Dynavector. Even with some quite worn and battered parts of my collection the result was the same - magnificent!

Beyond that it obviously set new standards in my system, no doubt when I've stopped messing about with turntables I'll have time to test other exotics, but for the moment the DRT-1s rules the roost here. Weaknesses? Hell what d you want me to say? It didn't quite draw the astonishing sub 30 hz performance the new Linn Arkiva (review soon) sucked from the grooves but then neither does anything else. By any normal measure the bass was deep, natural, fluid (insert your own hyperbole here). Ditto the rest of the range. Tonally it's very even handed, not bright like a Audio Technica, not bassy like the Arkiva, or warm like a Goldring Elite - just well balanced.

I'd hesitate to call this a review, more a 'second look' and a lot of self-justification. But the result will at least please Dynavector for now their new flagship has a healthy lead over the XX-2. I suspect it's more because of a maturing of the original concept of the DRT rather than any fundamental change, whatever, it was worth the effort.

Now the bottom line... The DRT-1s is even more expensive than the DRT-1, but the difference in sound is significant enough for me to say that the DRT-1 should be ignored, hell - if you are going to sell the car to finance a cartridge you may as well go the whole hog, the difference isn't huge after all. As for the justification of spending as much as the price of a decent turntable AND arm on a cartridge only you can decide. Add the fact that you don't buy a cartridge, merely 'rent' it's ability until it needs the next rebuild, and you've really got to NEED that sound before you can justify the outlay on this or any other exotic. But on the other hand, if someone was to say "OK you've got to downgrade one part of your system" I'd honestly say that removing the DRT-1s and replacing it with say the XX-2 would be a bigger hit than say going from an Orbe to a Gyro, or the SME 4 to a Rega.

If only the bloody things lasted forever...