Vinyl Frontiers: How the bass was won 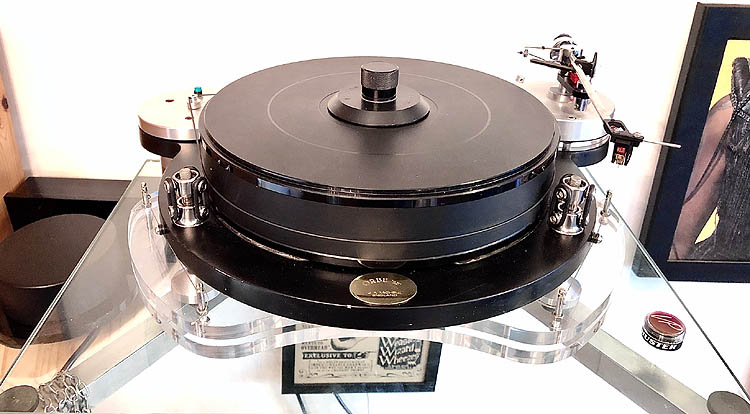 The Danelaw applied to Britain's turntables

Michell Engineering, originally under the auspices of John Michell and now his heirs & successors, have been ploughing a unique furrow, independently and separately, in the world of UK turntable manufacturing. This furrow began with the first (1977) Michell variation on the Transcriptor Hydraulic Reference, the latter being manufactured in Boreham Wood in Hertfordshire since David Gammon's Transcriptor turntable factory relocated (1973) to Eire from near Michell's premises. Eventually their arrangement, the Technical Agreement ended and the Michell Electronic Reference turntable was joined by the Prisma and then both were superseded by the first generation Gyrodec. The Gyrodec better met prevailing British audio media trends with a suspended subchassis and flat disc support. At the time it was a very expensive turntable at the top of the market, featuring an innovative inverted bearing from 1992. Now, despite many significant improvements over the years, it looks like a bargain.

Proprietor John Michell had been making changes to the Gyrodec over time, including platter material, motor power supply, motor support and more detailed tweaks to materials. Briefly two belts were introduced in a Flat Response to a critical review, although John told your (then younger) Old Scribe that he knew of no one who could reliably hear any difference. To advance the Gyrodec any further, significant changes were indicated, including the loss of those iconic hypnotic gold plated platter weights as required improved platter density dictated. This would not do. Hence a new model was designed building on the strengths of the Gyrodec and mitigating some of the its limitations.

High priorities included improved isolation from motor noise (in that era of Papst 19-24V phase shift synchronous motors) and improved isolation from structural & acoustic feedbacks. Also addressed was the Gyrodec's widely reported lower midrange bloom from sympathetic resonance in the massive cast subchassis. The resulting new model was well received when shown at various of the many HiFi shows of the day. The all black Michell Orbe was a striking departure from the aluminium and gold Gyrodec.

The all black Michell Orbe became a natural partner for the equally raven clothed SME Series V. Dealers reported that buyers would only have the Series V on an Orbe and a Series IV on a Gyrodec matching arm to subchassis chromatically, regardless of mechanical or audible properties!

All was not well in the marriage of SME Series V and Michell Orbe. The proprietory Densoglop Sausages wedged into the Gyro/Orbe cast aluminium subchassis did not prevent the SME Series V from stimulating the lower midrange subchassis resonance, as did SME lesser brethren (Series IV & 309 and various Rega variations). Chance favours the prepared mind and Geoff Husband accidentally discovered and identified a significant inexpensive trick, as is our wont on TNT-Audio. Danish audiophile experimenter Neils Nørby and former TNT-Audio scribe Werner Ogiers had also been experimenting with solutions to the SME arm-subchassis interface. 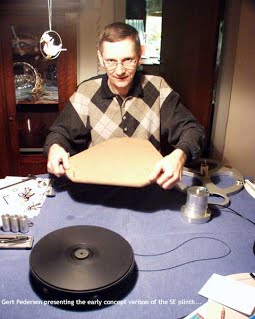 The Vikings invade all parts of the Orbe

Meanwhile, across the North Sea from Michell Engineering, Gert Pedersen, a Danish engineer, has been ploughing a unique furrow in the realm of turntable upgrades for over a quarter of a century. Gert and his friend Niels Nørby, a notable loudspeaker designer from Copenhagen, were on the case. Niels had been unhappy with the stability of his Gyrodec subchassis and both had been as unhappy as anyone about the relationship between the pickup arm and the subchassis.

Gert Pedersen says, “The upgrade was starting with my friend Neils Nørby, so I have made all parts in polished Stainless Steel to make it look great as well, the same as it is today. I have not measured resonance or frequency and other things, and not tried reducing the mass, I have done it in co-operation with my friend who has made the first test and work on his GyroDec, to make it sound better." 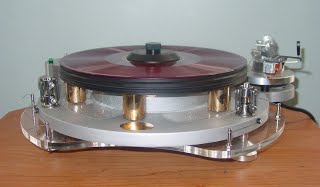 In 1993 Gert Pedersen bought his first Michell Gyrodec. As a metalworker himself, Gert was impressed by the engineering and production quality of John Michell's then flagship model, but not sufficiently smitten to miss some potential shortcomings. Gert inevitably encountered Nils Nørby and friendship grew as they tried and evaluated ideas on their Gyrodecs. Gert Pedersen applied his metal working skills to the ideas they both shared, so that the resulting new suspension would look as good as the original Michell. These modifications will be considered in detail in part 4.

Since then, Gert also developed a sophisticated solution to the armboard resonance transmission problem. The subchassis resonance has also been addressed more fundamentally by major structural changes.

There are 3 subchassis modifications, all of which play in much higher leagues than the Michell Densoglop applied to the Michell Orbe subchassis. John Michell told me that he reckoned the differences between the Gyrodec and the Orbe were created in equal parts by the new motor power supply (then exclusive to the Orbe), the new more inert platter, and by the subchassis damping and additional plinth isolation. The Pedersen subchassis modifications will be considered in detail in part 3. They include pure mass and mechanical reinforcement.

It takes a brave soul to tackle an iconic product, whether it be creating a handling kit for an iconic British sportscar, or developing a complete makeover for the operating principles of an iconic British turntable. Gert Pedersen produces by hand, a kit of parts that raises the sonic performance of a long established flagship masterpiece. The original Michell Orbe is a single minded product and these modifications have the individuality of the auter. Further analysis will describe whether and how it all works. 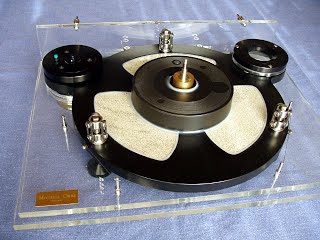