The Holy Grail Of Audio 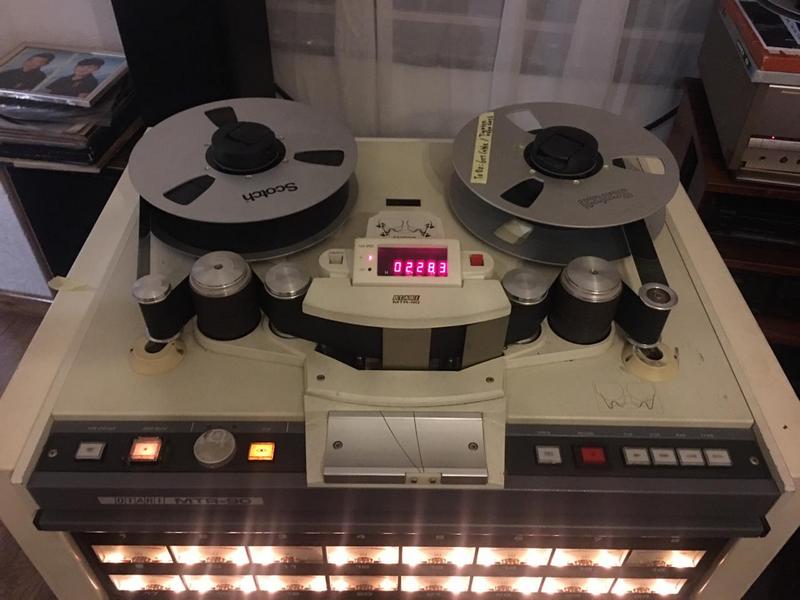 Little did I know when I wrote my original article, here, that I would be opening a new can of worms for myself. I too had had a resurgence of interest and quickly found other audio types near me in South Africa that were just as nuts as I am. One of them has over 15 different decks, ranging from a Studer A80 with meter bridge to the Otari MTR90 2" 24 track pictured above. To be precise he actually has two of the beasts, the other also 2" but with 16 tracks. Another friend has around 12 decks, including a few Studers; another, who is a connoisseur of all things Studer, a collection of note. There are others... Of the decks I owned as shown in the previous article, only the Akai M9 remains, so as to play my many 4 track tapes.

This current article details how with a little bit of looking around I was able to find other decent machines without a whole lot of trouble. And if this can be done in South Africa, imagine how easy this would be in Europe, the UK or the US. Below are the details of how I ended up with my Holy Grail. I am not mentioning price but they were all very inexpensive bar the last one. By inexpensive I mean cheaper than an imported pre-recorded tape! 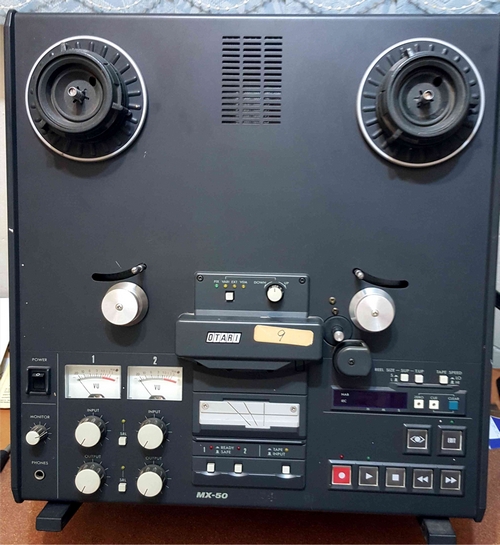 One of my friends persuaded me to get rid of the Otari MX5050 (it was well worn and became a donor machine) and donated a pristine and overhauled Otari MX50. This I put into a movable stand and again added a "Break Out plate".

The Otari MX50 is a very advanced machine for it's time and beautifully built. The only fly in the ointment were the two tape tensioners which, with age, had worn flat spots onto them. The back of the tape rubs on these which worried me so my always inventive technician made up a version which sports bearings. 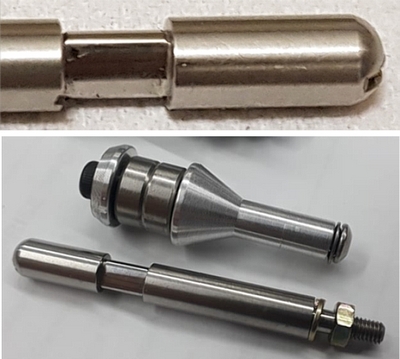 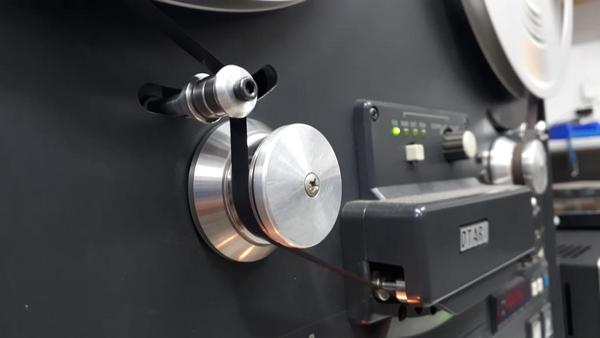 The running area is bigger than the old rod type but that matters not as the rollers they feed onto are the actual guides.

So far four of these modifications have been applied to other decks and without doubt make for a smoother running and quieter machine. Plus it removes all worries about tape wear! The Otari, apart from the level controls for recording and playback, also has SRL buttons between the controls which overrides them and sets to a preset studio level. Tape handling is very gentle and a built in Locater function is quite useful. 7 ½ and 15 inches per second speed, although by moving a switch inside the machine can perform at 3 ¾ and 7 ½ ips. Two track ¼ inch tape.

A friend pointed me at a gentleman who was wanting to divest himself of two Studer A80R broadcast machines ex the SABC (our local government crippled radio and TV network). The SABC supposedly had 264 Studer A80R's with their own adaptions along with heaven alone knows how many other tape recorders in it's heyday, and these had either been sold off for small money or had been sent for scrap. I ended up having to buy both machines as a job lot, one stereo and one mono. I had the stereo one re-capped (Studer caps are a bit iffy when they age) and sold on the mono version. That was converted to stereo by the man that worked on mine after I sourced a set of stereo heads.

On the left: the Studer A80R in it's SABC "Early Industrial Monolithic". Middle: from the front with new lid, front panel not fitted. Right: rear showing a "break out plate". I felt I needed this, as to get to the XLR sockets required taking off the front panel and getting down onto my knees with a torch. 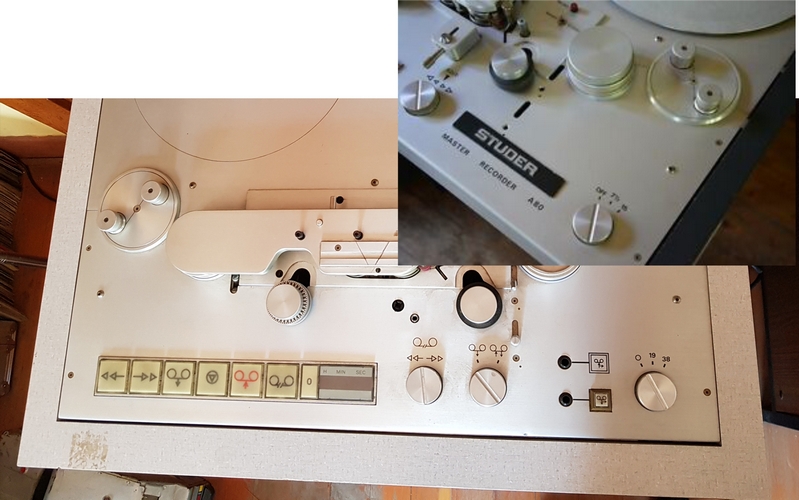 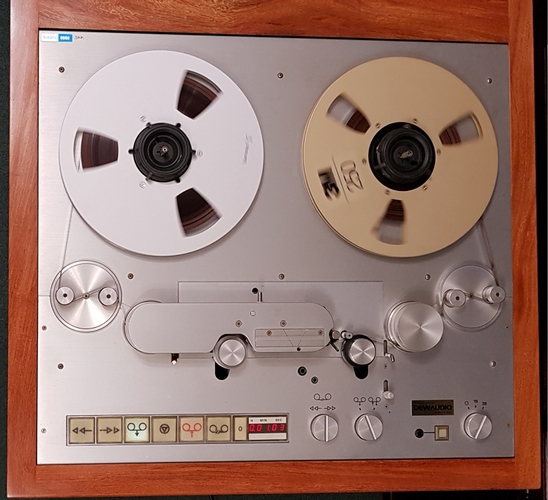 This machine, having been modified by Studer from the original as per SABC requirements, has a few odd features. There is no meter bridge or facility for changing the record level on the fly as the SABC no doubt used there broadcast console. It's not a problem usually, as the record gain is set much like the Studio override on the Otari. The Icons on the transport controls are, it seems, an attempt to get away from the language issues in this country and secondly there is an extra knob, right hand of the group of two and a pair of sockets. These extras were to interface with the broadcast deck and allow for a monitor headset. The extra knob now serves as a record "Arm", the light as a armed warning and the socket unused. The other hole has been covered by the technicians identifier plate. The Formica surround was replaced with wood and a hinged lid added.

Studer is a byword for quality construction and sound - big die cast plate under a thin aluminum skin and a veritable rats nest of wires underneath!

Then there bits added to bits.

The Fostex is a bit of an anomaly in the audio scene. Some people love them and others hate them. There may be a problem with finding spares, this one I'm lucky so far as it's in very good condition. I purchased this on the sound alone. Tape transport is much softer than the Studer or MX50 and the hubs are the best of everything I've seen so far. Comprehensive Locater/memory system and very gentle tape transport. The extra channel is for syncing to another deck. I added a splicing block ex an old Studer and what by now has become a theme song, a breakout board. Unlike any other machine I have owned the Fostex has both balanced and unbalanced inputs and outputs. It also features a means of mistakenly recording over something you wanted by having channel select/arm controls as well as the "Push Play and Record". Works the same but is different from the Otari. 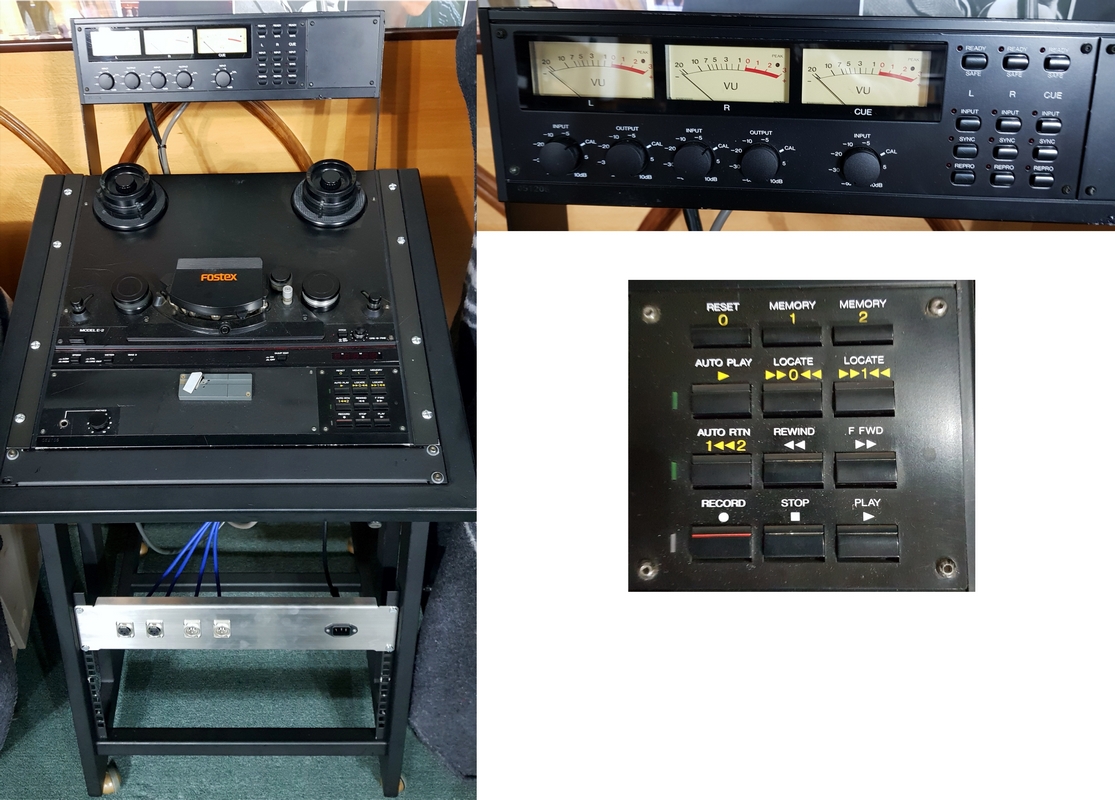 At this point I had thought I was going to be happy and spent many hours recording and playing back. I had one issue with playback which annoyed me, and that was that the Studer had a much fuller/coloured/bolder playback than the other two. I carefully recorded the same bit of music sequentially on a tape via all three machines and then played those recordings back on all of the machines. One quite astonishing finding was that neither I nor three other friends, all seriously into audio, could tell which machine recorded which track. No Studer, Otari or Fostex sound just pretty much the same.

Play back was a bit different. The Fostex and Otari were very close and the Studer wildly different with a far more exciting/coloured sound. I have said it twice now, coloured and (if there is such a thing to brag about) analogue. All three decks made a recording from a digital source sound a bit less dull; the Studer made it sound more live than it should. So, if I rate the decks as pure recorders: pretty much the same. As pure reproducers: Otari, then Fostex, then Studer. Ease of use: Studer is easier to thread, then the Fostex then Otari. Transport: Fostex is the softest, then Otari then Studer.

I have never snapped a tape on the Fostex or the Otari. The Studer quite a few times. The Studer is not happy working with Triple Play tape where as the Otari and Fostex don't notice. I have a couple of 10" reels with 7,600 foot of tape (2 x 7" 3,600 foot tapes spliced together) and the Studer does not like it. Nor do other A80's. Build Quality: Otari then Studer then Fostex. The Otari is very logically built with no wasted space or material, the Studer a bit haphazard with lots of extension bits. Very heavy casting under the top plate but quite iffy bits in other places. The Fostex is just less heavily built than the others. Having said that, the top plate of the Fostex is thicker than the other two. So, I'm a heretic - sue me! If I had to sell a deck which one? The Studer. I didn't have to sell it, but just by chance a buyer came up with a reasonable price which allowed me to buy......... 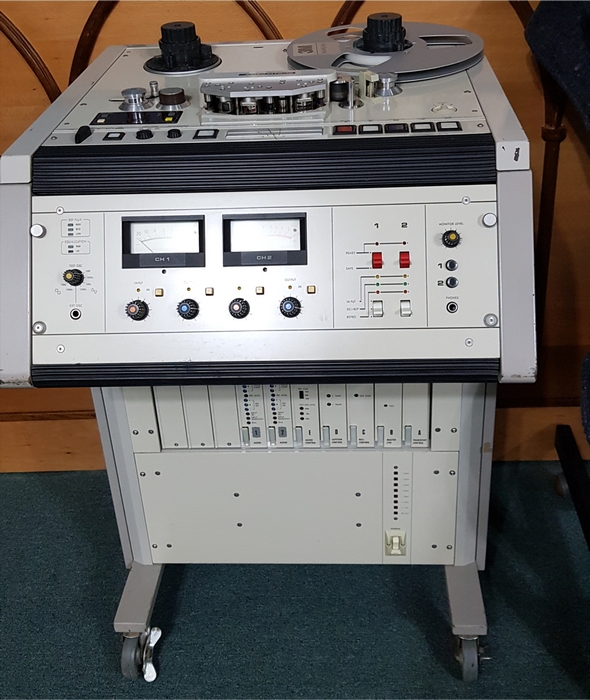 I saw this machine just after I acquired the Studers, but the owner wasn't ready to sell it. As he is now leaving SA my technician friend jumped in for me! If it's any indication I drove a round trip of 760 km and eight hours to fetch it. Factor in a visit to the remains of BOP Studios and I spent 15 hours away from home that day!!!

The Otari MTR 10 is my dream machine - it certainly has the best tape handling with servo motor spooling reels locked to the capstan. There is for example a function where you can turn either by hand and the other will track it's movement regardless of what size reel is on a spool. Digital tape speed readout in inches per second or as a percentage of the speed, single place locater, built in monitor with speaker or headphone jack, multiple selector for different bias settings which are settable, built in audio oscillator for biasing so no alignment tape needed. The ability to monitor the input or the tape head on the fly, separate record arm, SRL plus variable input/output. There is also a special "pack" rewind/fast forward speed so you get a tighter spool. 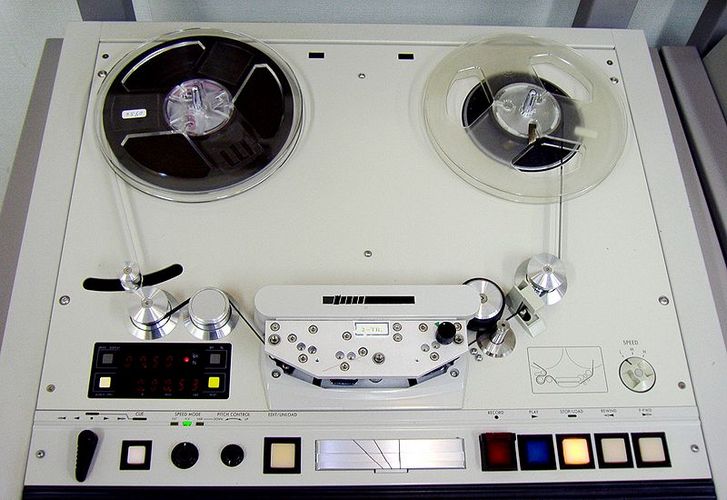 The machine runs at 7 ½ ips, 15 ips and 30 ips and it handles my 7,200 foot tape with ease. Interestingly the faster you run tape the more the bass drops off. That is very easy to hear on my other machines, and in fact there is mention of this in many places on the net, however the MTR 10 has correction switches for record and playback. Recording at 30 ips is an eye opener especially with dynamic music, but the problem here is it eats tape. 1,800 foot in 12 minutes. My 7,200 foot tape lasts 48 minutes.

Inside show a view of the machine with the deck tilted back and the front panel tilted down. Two thumb screws for the front and push buttons on the side for the top. And you can run the machine while you open it! 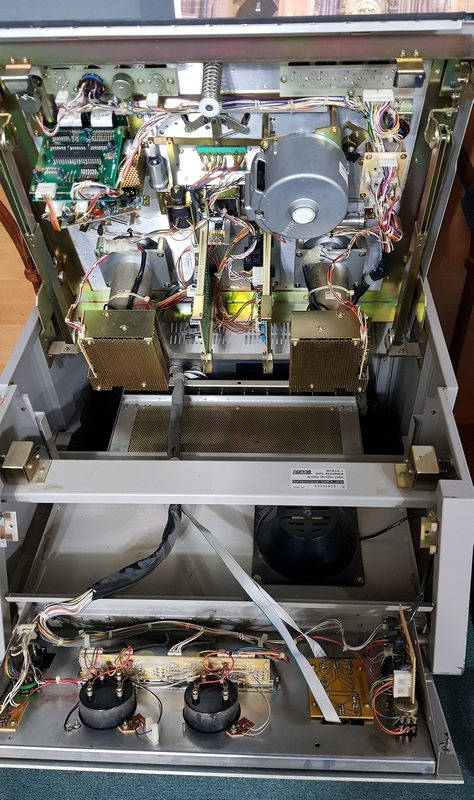 Recording and playing back is quite a surprise, by far the closest thing to reproducing "what goes in, comes out" I have heard so far, including some very fancy digital equipment. I was more than bemused listening to some music played back through a mixing console via a Class D amplifier into Kinoshita Monitors. I mentioned mixing consoles in the previous article and I still am not sure how music survives thousands of op amps. See here, for example.

All in all tape recording is fun and for the ultimate in analogue sound reproducing it can't be beat!