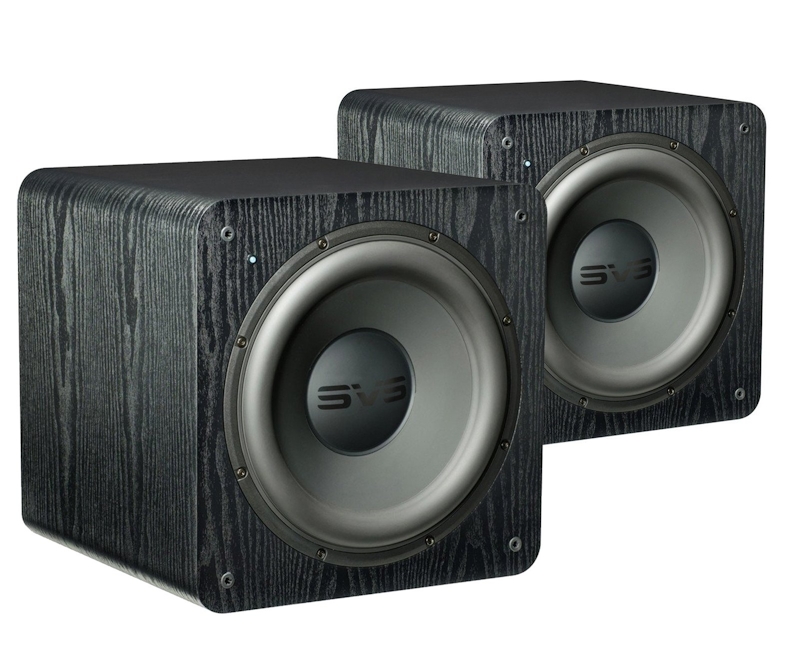 SVS is an Ohio based manufacturer of speakers and subwoofers aimed at the home audio market. I was intrigued by their subwoofer lineup, and thought to pick a model for review.

Most models come in a ported or sealed version, that was an easy decision - from all of my past experience I will always only consider sealed designs. Give my room size and conversations with their very knowledable team, I settled on the SB-3000 model (13", 800W). And after initials listening tests and further conversation, we felt it would be even more useful to compare that model to a pair of the SB-2000 model (12", 500W).

Theoretically, there are a few reasons to consider using a pair of subs instead of a single unit. These are - extended and smoother response with more placement options, more headroom , lower driver excursion and lower ability to localize LF. Their website has extensive discussion on the subject. But the only way to really know, is by direct listening comparisions.

The green curve is the AK OB1 DIY open baffle speakers running on their own. There is a 10dB drop from from 95 to 85 Hz, instead of an ongoing drop there seem to be a few modes that I should probably solve for with a high pass resistor, but that is a different battle.

It seems I have a room mode at 30Hz, and that is something the parametric equalizer cannot neutralize. So I decided to calibrate all 3 subs to the same level at 30Hz. You can clearly see that below 30hz the SB-3000 is a bit flatter than the ACI Force, and the pair of SB-2000s is even flatter yet. What is quite remarkable, is that the audible differences in listening are much greater that what the differences in the measured curves indicate.

Listened to the track without any subs to calibrate my ears to the woofers of the OB1. The light paper and no crossover, makes for a very responsive and transparent sound. The ACI only added legs, and otherwise perfectly integrated with the OB1s, the double bass now sounded like a complete instrument and placed dead center on the stage.

The SB-3000 was noticably deeper than the ACI, and every bit as natural sounding once I got the phase correct - the best way I found to set phase, was to use this track and choose the setting where the instrument seemed to be placed dead center thru all the notes. The SB-3000 also provided a longer and cleaner decay of the double bass much lower in the spectrum, relative to the ACI Force, whose decay was perhaps just as long but only in the higher frequencies.

The pair of SB-2000s were certainly deeper sounding than the single SB-3000, not surprising given the response curves. But the pair were also somehow much cleaner and tighter sounding, I suspect that is the reward of using 2 drivers for roughly half the excursion than one drive doing about twice the excursion for the same SPLs. A single 13" SB-3000 has 531 sq inches of radiating area, whereas the two 12" SB-2000s have a radiating area of 905 sq inches; so it is easy to see why the pair would produce the same SPL with lower excursion and hence distortion. As a result, the decays were just to die for - gorgeously long and natural sounding.

The SB-3000 again, was much deeper than the ACI Force, and atleast as clean and immediate on transients. But the biggest difference was in the decays - longer, deeper and crystal clear. Predictably from the previous track, the pair of SB-2000s went deeper, perhaps a bit cleaner too. And the decays seemend a bit more extended in frequency, and extremely clean. This brings the system upto a whole new level.

"Rimshot" (Eryka Badu; Baduism; Universal; UD53027)
This album, and specifically this track have a fantastic electric bass line that dominates the balance and mood. I have used this as an acid test of deep bass performance since it's release in 1997.

The electric drum kit on the intro is a very punishing section, I always thought the ACI Force did a commendable job till I heard the SB-3000 on this track. Not only much deeper, but also so much cleaner. And then the pair of SB-2000s went yet a bit lower and deeper and cleaner.

A pair of SB-2000's does perform noticable better than a single SB-3000, and for a fractional increase in price, that is a very easy decision for me.