Stylus mistracking
I loved your article on the Garrard Zero 100. I have a question: my Lab 100 constantly skips across the record, I see no adjustment for this problem ....can you help ????? .....
Moving the weight in the back does not help!
Fred - E-mail: volhein (at) verizon.net

LC
Dear Fred,
mistracking issues might be caused by a variety of reasons:

You might want to increase tracking force. Do that using a precision pressure gauge. You might need to reduce antiskating force and inspect internal arm wires, perhaps these are forcing the arm into not neutral positions. Moreover, inspect the cartridge stylus/cantilever: both can be damaged or in need of replacement. Finally, check the position of the platter with respect to the horizontal plane. If it is not perfectly levelled the gravity force component will make the stylus skip.
Happy tweaking!
Lucio Cadeddu

Xperia z3v
Hi Lucio,
This is the first time I've ever suggested a product for review, though I've been a long time admirer of TNT audio. However the new Xperia z3v from Sony is the best thing for mobile HiFi since the iPod classic. It is amazing. It not only has an amazing sound, not that surprising from Sony, but it will play anything you throw at it. Alac, flac, even 24 bit high res files. Even the walkman interface is pretty damn good. Currently listening to it using beyerdynamic T50p and I'm extremely impressed. I have also heard that it will output to a DAC as well, haven't tried that yet.
I just need to get all my lossless files on to an SD card!
Regards,
Bevan - E-mail: court.bevan (at) gmail.com

LC
Dear Bevan,
thanks for the suggestion! We always try to get review samples on loan from "big" Companies but it is not always that easy: sometimes they promise everything and then fail to supply anything. And it is not rare they don't even reply to our requests. Our lack of advertising space on our website certainly plays a role here...
Happy listening!
Lucio Cadeddu

Arcam FMJ A19 review
Hi! How good is the Arcam FMJ A19 amplifier you reviewed, and how does it compare to the YBA wa202 receiver? Could the Arcam FMJ A19 be a good match for a pair of QAcoustics 2050i speakers?
Thank you.
Igor - E-mail: banyakigor68 (at) gmail.com

AN
Hi Igor,
The Arcam is very good for its price range. I haven't heard the YBA amplifier or the Q Acoustics speakers so can't really comment. YBA kit is usually good and that amplifier has been reviewed well elsewhere so it's worth a try if you can get to listen to one. Speakers are very much a personal choice and depend as much, if not more, on the room than anything else. Again, relying on others' reviews the Q Acoustics should work fine. As ever, audition in the room if at all possible.
Happy listening!
Andy Norman

New set-up
Hi Lucio, hope you are fine.
Here is what my setup looks like after I discarded my 5.1 system and now only Naim CDP + Technics TT, Denon DL 103 cart, Lehmann Audio SE2 PWX phono + Naim Nait 5i-2 integrated amp + Merlin TSM MMM speakers. I got myself a simple teakwood rack.
The setup is sounding natural and nice. Carpets up next...:-)
Regards,
Mahesh - E-mail: mpwaran (at) yahoo.com 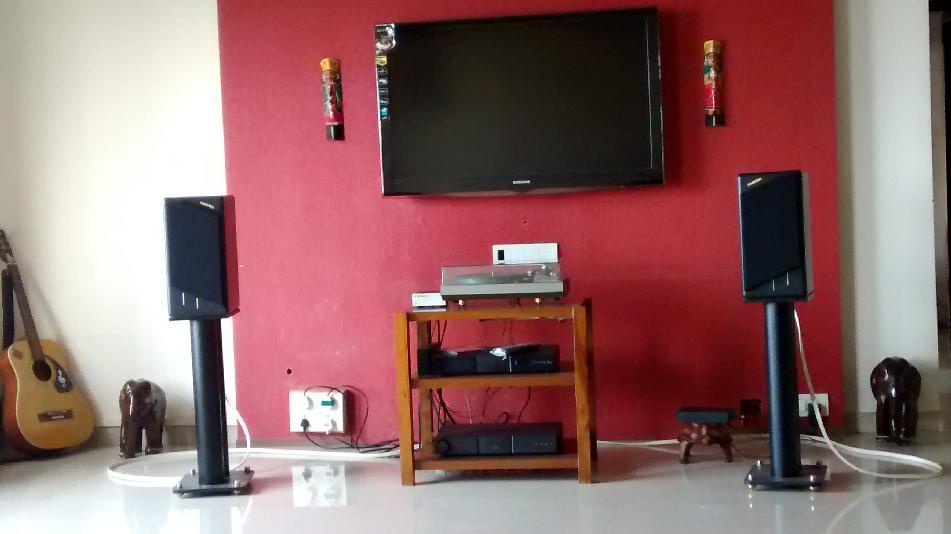 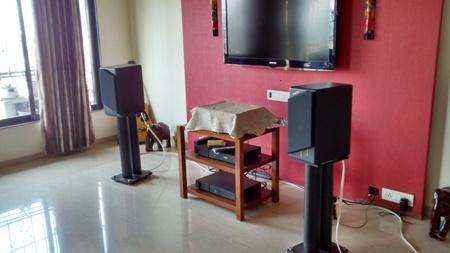 LC
Dear Makesh,
thanks for the update! Getting rid of that 5.1 system was the thing to do. Your speakers and components seem nicely installed now, but, as you already know, you need something that can help reducing floor and walls reflections, with carpets and the like. I'd also place a curtain in the rear wall, to cover the TV screen when not in use. Morever, move that guitar from the left corner, its body will highly resonate with music, adding sme colouration to the sound!
Happy listening!
Lucio Cadeddu

Dayton APA150
Greetings! I very much enjoy your equipment reviews on TNT-Audio. I am considering the Dayton APA 150 for a pair of Monitor Audio BX5's and Totem Dreamcatchers. I am currently using a Marantz PM/CD6004 combo, switching speakers every once in a while. My question is, what would I need to use the APA150's as monoblocks and would the Marantz CD6004 be a matching source, as you've mentioned the problem with your Cyrus player. I'd appreciate very much your opinion on this matter.
Thank you.
Rafael - E-mail: pagmed (at) hotmail.com

AK
Hello Rafael,
Glad you enjoyed the review. I am not sure how you intend to use the amp for 2 pairs of speakers, or how a monoblock would play into that configuration. I suggest using it in stereo mode.
Also, I have never had a Cyrus CD player. Perhaps you have my review confused with someone else's.
Arvind Kohli 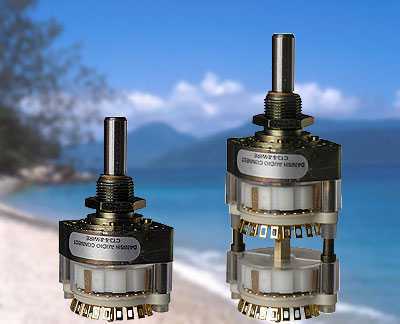 Hi Mark,
I read your 2008 review on DACT selector switch with great interest because I'm planning to install an high quality switch in my mono block tube amp that has built in Goldpoint stepped attenuator for volume control. My DAC output is way too high for my amp so I need install a pre-attenuation circuit before the Goldpoint, but I want to be able to switch between different pre-attenuation values.
Have you found switches better than the DACT? I know you also use Shallco but I wasn't sure from the review if that was included in the comparison. I'm also in the process of building a custom tube amp with built in volume control requiring selector switch. I'm trying to find the best parts for the application. If there is anything better, you would save me a lot of time and expense.
Thank you so much for your review. I wish there were more like yours out there.
Mike - E-mail: mckwon8 (at) yahoo.com

MW
Hi Mike,
Thank you for your kind words about the review.
I was unable to do a direct A-B comparison with the Shallco because it was already wired into part of a stepped transformer circuit and my attempt at a flying lead adaptation introduced too many variables for the comparison to be valid. The difference between generic audio switch and DACT audio switch is so slight (equivalent to one changed series signal capacitor in a circuit) that I imagine that the difference between DACT and Shallco will be inaudible and certainly not worth losing any sleep over. The decision will come down to what configuration you need (Shalco will make any configuration for you) and where you live. Shalco are based in North Carolina and DACT are based in Denmark (The clue being in the name Danish Audio ConnecT, so North American residents will probably find Shalco more economical and European citizens may find DACT better value and in the UK there is also Blore-Edwards whose products I have not tried.
Your project sounds fascinating and we'd like to hear more about it at TNT-audio.com, so please keep in touch and maybe consider writing it up.
Happy soldering,
Mark Wheeler

TNT FleXy rack
Hi there,
You may have had too many queries on this, but was wondering when you drill the holes in the shelves whether it be MDF, or solid timber. What is the ideal distance in from the edge of the board, to drill the 18mm holes?
Regards,
Anthony - E-mail: abarkwith (at) hotmail.com

LC
Dear Anthony,
believe it or not, this is the very first question on this topic! :-)
I understand you might be afraid of drilling the holes too close to the edges because this might cause a shelf/rack failure. And you are right, but there's no definitive answer to your question because it all depends on shelves material, thickness and on the weight of the components of your HiFi system. Medium density fiberboard (MDF) is pretty solid so, unless you use very thin shelves you can drill the holes fairly close to the edges, say, 2 cm (1 inch) should suffice. Solid wood/timber might be stiffer, depending on thickness, again, and on the age of the wood. I do not recommend drilling holes too close to the edges, 1 cm (half of an inch) might be the dangerous zone. Holes distances from the edges do not affect sound, of course. As a rule of thumb, the more you stay far from the edges the stiffer the TNT FleXy rack becomes. Please put "DIY Flexy rack" on Google Images and have a look at what others have done.
Hope this helped somehow, happy DIYing!
Lucio Cadeddu