Goertz cables
Bonjour M. Cadeddu,
in my search to get an interesting and (if possible) truthful sound I now possess a pair of Goertz M1 speaker wire and a Pearl silver interconnect. Very interesting cables, if you have any chance to try them. They have a lot of very nice qualities. They are linked to a modified Winsome Lab amplifier and a Pioneer Elite PD-D9 Mk 2.
Bien ŕ vous,
Michel - E-mail: hebou (at) videotron.ca

LC
Dear Michel,
thanks for your kind suggestion. Generally we are lazy when it comes to cable reviewing. Cables reviews are difficult and too highly system-dependent. For this reason we have refused many cables we've been offered to review.
Thanks and happy listening,
Lucio Cadeddu

TNT FleXy and Stubby
Greetings,
fantastic website, I love you guys. Awesome resource!
RE: FleXy. When I saw this page I thought: wow I have to build that! Well. Still haven't built it for my system upstairs but I was sitting at my laptop (not unlike right now!) and it came to me. SWMBO (She who must be obeyed) really doesn't like my speakers on her dining room table, I could probably use this Flexy idea to come up with a speaker stand. Well here is the result, they actually worked out really well, they even provided some extra LP storage space, and with the 15lb paver sitting on the bottom they're not prone to tipping ;)
Thanks for the great idea! I'll have to send a picture of the big one I make for my main system. I used ˝" threaded 3' rod for this, ľ" MDF for the shelves, I knocked these out in 2 hours! Even unfinished as they are currently, they have a high WAF factor, especially since the speakers are no longer on the dining room table! Oh and they sound MUCH better now.
RE: Stubby. Well, in spite of myself, I built a set of these guys, but I used 4" pvc, 3' threaded ˝" rod and ľ" MDF for the top and bottoms. I got some cheap spikes from Parts Express, 1 can of semi-gloss flat black and viola! I also used rope caulk between the pvc and the top/bottoms this worked really well keeping the sand in the tube. I estimate that my stands weigh about 45lbs each. They don't make a sound and the bass from my Tekton's. I love them even more than I did initially.
You guys rock, fantastic site!
Paul - E-mail: redfish (at) hasafraker.com 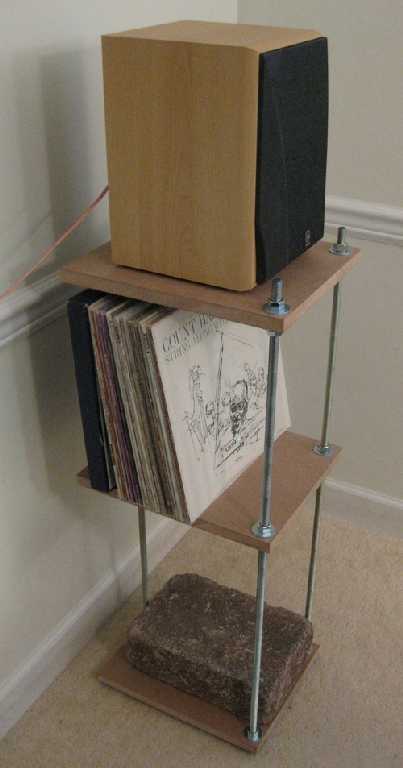 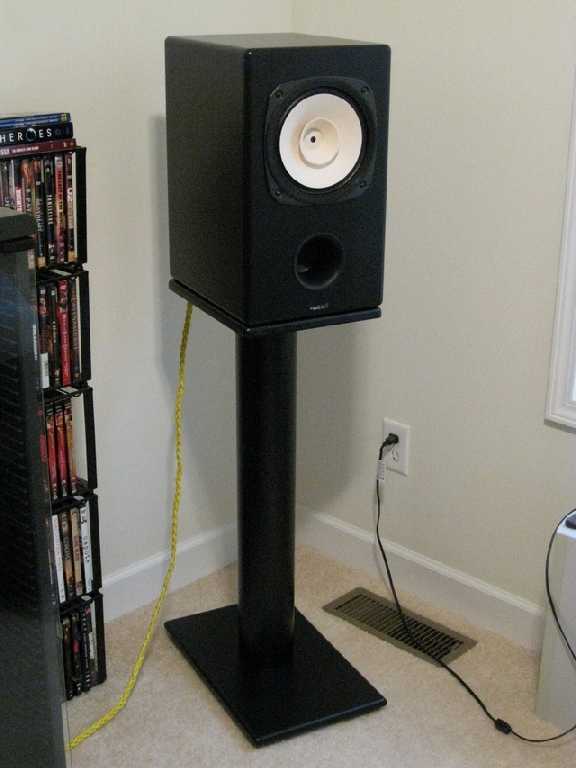 LC
Dear Paul,
thanks a lot for the precious feedback and the nice pics! I'm glad to hear you're (and your relevant S.O.) are so satisfied with these two DIY designs: they do look cool and sound good at the same time. Plus, they're extremely easy (and inexpensive) to build, like many other DIY designs on our website (check out the vast DIY section here on TNT-Audio). For example, you might find the DIY cables and accessories sections particularly intriguing!
If I may suggest something....keep those speakers away from corners!!!
Happy listening and DIYing!
Lucio Cadeddu

Audiodigit TubePre
Hi Nick, I'm Antonio from Rome and I have got a question for you. I read your article about Audiodigit TubePre and I would like to ask you if it's possible to build that kit with 2 pre-out since I have to do a bi-amp system and, if yes, how it's possible.
I hope you'll have the patience to reply me.
Thank you,
Antonio - E-mail: anto.mag (at) virgilio.it

NW
Hi Antonio,
Yes, it is easy to run two power amps from the TubePre. You simply add two pairs of RCA sockets for the output instead of one and then connect them together with wire.
One wire connects all the zero volt (ground) connectors together. The left channel signal goes to one black RCA socket (centre pin) and then the other. The right channel signal goes to one red RCA and then the other.
If you look at the picture of my assembled TubePre you can just see that there are six sockets on the rear panel, two for input (left and right channel) and four for output (two left and two right).
I hope that this is clear enough.
Regards,
Nick Whetstone

Recording sessions on video
Hello,
Hope all is well with you. I know you like to keep up with things going on, so I thought I'd let you know of a video project we're involved with. Watch the first episode of Masters From Their Day, Benchmark's new video-series documenting recording sessions, and also download the free lossless mastered track... www.MastersFromTheirDay.com.
The project uses our proaudio products in well known studios, with not-yet-famous talent, and mastered by Grammy award winner Gavin Lurssen. We offer a free download of the cut, both a 16/44 file and 24/88. Maybe your readers would like to add this to their music files.
This particular recording session is of some party music. A bit heavy on the bass, but a fun dance tune. Check it out. We have other sessions planned of different music genres which we hope to put out every month or every other. Some will be more "audiophile" than this, but I thought you might enjoy it nonetheless.
Best regards,
Rory Rall - Benchmark Media Systems, Inc.

LC
Dear Rory,
thanks for sharing this project with us. I found it extremely interesting as one can see how music is recorded, processed and even compressed (so one can evaluate its effects on overall sound quality). In the track, for example, many instruments seem to be compressed in order to favour the rhythmic section. Being a kind of "party Music" that makes sense, actually.
Keep up the good work!
Lucio Cadeddu

LC
Dear Tony,
some Lampizator tweak has already been mentioned on this TNT Readers' Corner. Yes, the Lampizator website is extremely interesting, with plenty of smart advices and insightful comments. Definitely worth a visit!
Thanks for your precious feedback!
Lucio Cadeddu

Real Stereo support
Also I do support another Blumlein invention, which variation is today known as 3D-stereo. Or like our "grand old man" for real stereo, Tapio M. Köykkä, and his efforts to get people understand why apparently good amps sounds "muddy".
His words: "record a piano play, and play it back backward. You can hear the differences. There is ALL THE SAME information as playing it forward, but only missing thing is the leading edge of sound."
That's simply how He descripted transient intermodulation distrotion. He made and patented pretty good amplifiers. Later He patented 3D-stereo system using his own ideas how to add and subtract right and left channels to get one more dimension to sound frame in your living room. Now you were able to hear the horizontal width AND the deepness of the performance. Orthoperspecta was born.
So.. I support ANY real stereo..
Goran - E-mail: gvhass (at) yahoo.com

LC
Dear Goran,
thanks for reminding us of the Orthoperspecta patent. It should be mentioned, also, that Mr. Paul W. Klipsch experiments on three channel audio reproduction must be considered a real pioneer and seminal work at his time. Simple stereophonic sound can be bettered somehow but there's always a price to pay (things become more complicated and expensive, normally).
Thanks for your precious feedback!
Lucio Cadeddu

Bookshelf speakers under 500 $
I'm looking for a good pair of bookshelf speakers for $500.00 dollars or maybe less. There are so many to choose, but want the best bang for the buck. My system is a sony ta-n55es amp, cambridge audio c-500 pre-amp, pioneer pd-d6-j cd player and yaqin tube buffer.
I listen to jazz, r&b, soul along with artist like clapton, doobies and eagles. Doesn't need a lot of bass, just enough, mostly listen for the mids and highs. Hope I've given enough info, thanks for any help you may offer.
John - E-mail: jsowers421 (at) yahoo.com

LC
Dear John,
depending on your taste and on what you can personally evaluate, I'd suggest Quad 9L2 or KEF iQ30 is you prefer a slightly warmer tonal balance, Monitor Audio Silver RX1 and Focal 706V if you prefer a brighter sound, and Mordaunt-Short Aviano 2 for a more neutral presentation. Try to find a store where you can directly compare some of these speakers, using - at least - your favourite CDs. Do not forget to have a look at the second hand market, there you can find much better speakers at the same price.
Hope this helped,
Lucio Cadeddu