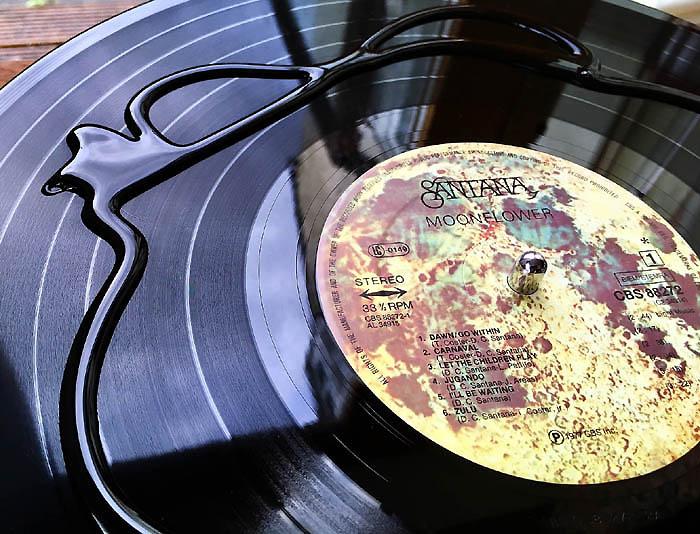 During the review of the Styl:Us Show the plebs chorus complained that record cleaners were never going to set their pants ablaze, but hopefully this will start a flame in their hearts. Here we have a product that promises much from a radical approach requiring no fancy motorised troughs, no suction nozzles, no immersed vibrators ("Steady on Old Scribe", caution Plebs), but which does require equipment other than that supplied in the packaging. Previously there was the quaintly named DISCOFILM in the 1970's and Nakaoka have also made superficially similar products since then.

Translating the specification results in some amusing ambiguity. Divinyl LP Cleaner is described as a water based compound for the deep cleaning of vinyl records, made of PVA (polyvinyl alcohol), distilled water, IPA, anti-static agent and tensioactive. IPA could be Interpretive Phenomenological Analysis, an activity that could drive its practitioners to drink, so fortunately IPA is also India Pale Ale (a bottle conditioned type of British craft beer brewed for export). Here it is more likely to be Isopropyl Alcohol, (CH3)2CH(OH), commonly used by vinylophiles to remove pressing mould release agent (MRA) from the surface of new LP's, when diluted, in distilled water, to almost homeopathic concentrations.

"What's a frustrum?" Demand cynical Plebs, stage left.
A frustrum is the portion of a cone or pyramid which remains after its upper part has been cut off by a plane parallel to its base.

Divinyl comes from years of tests and contains only raw materials that are completely safe on the vinyl's surface, according to the makers. They say that Divinyl LP Cleaner uses only raw materials that are compatible with the delicate surface of vinyl discs (and makers warn against using on Shellac (sorry David). Divinyl permits extended contact times of the cleaning agents on the disc, arguably increasing the thoroughness of the cleaning process.

They also say "Divinyl LP Cleaner is a viscous and easy-to-use polymeric preparation; Simply pour the product directly onto the disc surface and spread it homogeneously using a plastic spatula". The product could be applied using a plastic card (like a credit or debit card) being careful not to cover the label. The instructions add that a wet gel thickness of not less than 1mm is recommended for a smooth film removal. Following TNT-audio tests of Divinyl we would swoop a loop of the liquid as shown, similar to squeezing toothpaste, in a circular motion around the playing surface. Then spread it gradually across the vinyl's surface from the center to the outer part, propelling it thoroughly into the grooves in a bow-wave before a roller. The instructions do emphasise the importance of an adequate layer of product (not too thick, not too thin) to get best results and rapid drying. Too thin dries quickly but is difficult to remove completely; too thick wastes product and takes ages to dry.

The Divinyl application instructions are slightly misleading, but after several experiments, it becomes clear that it would not be possible to write brief instructions. This because the task is simple but the technique is difficult to describe. Some multi-lingual online video instruction might be helpful. That's why we've added some pictures here.

Applying Divinyl with a spatula is fraught with danger. Access to an art studio means your Old Scribe has numerous spatulas, clay tools and palette knives to play with. Soft nylon spatulas are better than hard plastic or a flexible steel palette knife, but even nylon artist's palette knives could cause surface scratching, if a corner of the 'blade' is inadvertently dragged onto the LP surface. Equally risky is that gritty contamination from the LP surface gets picked up by the Divinyl liquid formula and drags over the grooves, hidden in the tidal wave of glop preceding the knife surface. Thorough dry cleaning of the LP is therefore essential before applying Divinyl solution. 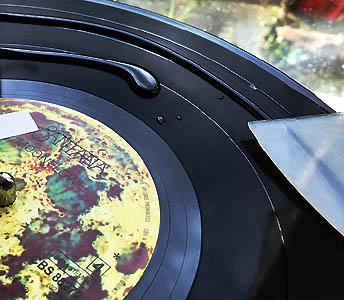 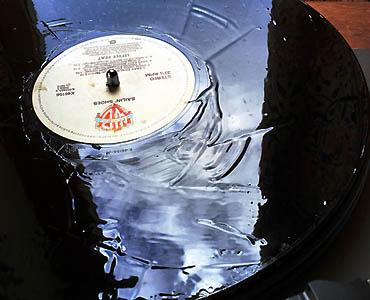 After numerous trials of various applicator types, your Old Scribe has come up with an ideal tool for the job. Hand-held ink rollers, of the type used by artisan printers to ink the bed-plate of a small printing press, or to use with Lino cuts or wood cuts. It is even possible to buy these rollers at the correct width of the LP playing surface. The roller spreads a bow-wave of Divinyl solution across the playing area of the LP. Because the roller rolls along with the solution, there is less opportunity to cause abrasive damage.

At worst, it could be half as bad as dragging a spatula, both at centre and at edge, in theory. In practice the roller shape minimises the effects of this while simultaneously encouraging the buildup of an even wave of Divinyl solution preceding the roller progress. How the solution is poured onto the LP surface affects the effectiveness of this. At first, the operator tends to apply a single thick whirl of solution, roughly the thickness defined by the applicator orifice. This is difficult to distribute evenly over the surface without many strokes of the chosen applicator.

Practice makes perfect. After a few LP sides the operator learns to squeeze more gently and move back and forth more swiftly. Something resembling a sine wave can be generated then the more adventurous can loop the loop to distribute a continuous sausage of solution across the playing surface. This is most easily accomplished on a turntable with the mat replaced by cardboard to avoid contaminating the turntable mat. Direct drive turntables will spin freely when off and remove the belt or disengage the idler as applicable. 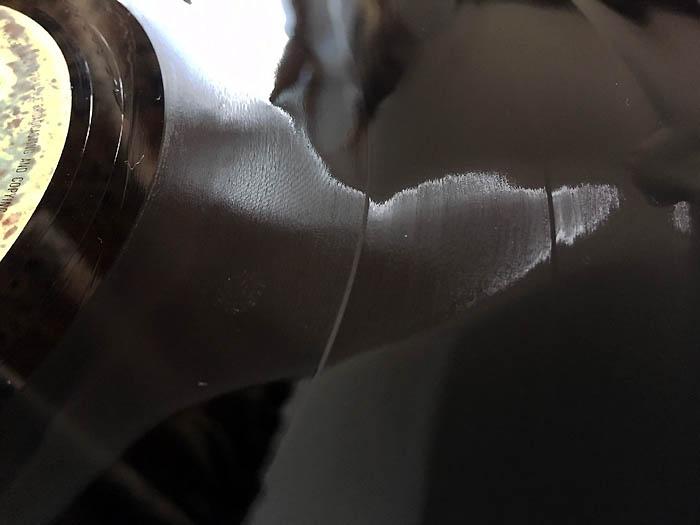 The instructions ask for an even coat of 1mm thickness. This is impossible to achieve in practice because the combination of viscosity and surface tension with the vinyl is such that the meniscus cannot sustain 1mm right up to the edge. Once the roller technique is mastered to moderately even distribution, and the drying time established as typically more than 8 hours in hot weather and good ventilation, the problem becomes one of where to store the drying discs.

It is worth cleaning with an earther (grounded) carbon brush to remove loose surface contaminants before applying Divinyl. Furthermore, it is worth playing the LP too; this will dig other dirt out of the grooves (evidenced by what remains on the stylus at the end of each side) so that the Divinyl fluid has the best chance of achieving maximum thorough groove penetration. 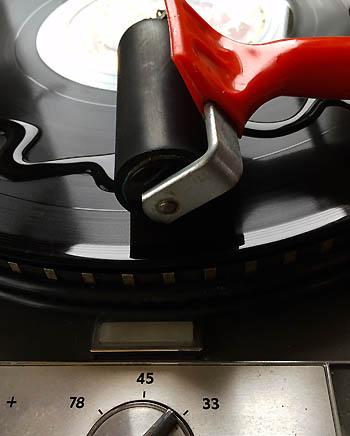 The stylus contact with the groove wall is the first active component of the vinyl replay chain. When the Benz Micro stylus first contacted a Divinyl cleansed disc, ears were tuned to surface noises of various types. Would this treatment reduce vinyl roar, or surface swoosh, or pops, or clicks, or ticks, or scroinks, or sgrrffs or would it add its own contamination?

Listeners are in for a shock!
Divinyl's most immediate effect on clicks and ticks is to make many of them more clear. Divinyl exposes all transients, treble clarity and high frequency phase information. Divinyl seems to remove the muddy residue of years of play, especially on those records dating back to smoke filled environments of yesteryear.

From disc after disc, forgotten details emerged, material became audible, that had become only present by being filled-in by memory. The initial release of Carlos Santana's Moonflower had been eagerly purchased on pre-order before release by your Old Scribe. The first copy was apparently plagued by audible MRA residue (mould-release-agent). Two replacements, ordered successively at the time, had the same problems in the same places, so it was clearly a production fault and the third copy remained in the (then young) Old Scribe collection. Every new cleaning product that has graced the Old Scribe listening room, including the Nagaoka peel-off solution in about 1980, has been tried on this disc. This may probably be the most comprehensively cleaned vinyl record in circulation in the world. Divinyl did not remove the lead-in groove noise either, but it did restore the high frequency clarity and low level detail remembered from when the disc was new.

Divinyl does not 'repair' scratches on the disc surface either, as some CD cleaners claim for the silver disc. Some LP's may contain particles that can not be removed, because they became embedded by the heat of the passing stylus melting them into the surface. Background noise from these events will be audible after Divinyl treatment, and may even be clearer. However, on the discs tested, these transient events, while being clearer, were less intrusive. There was a theory around among the flat-earth community that surface noise is intrusive twice.

The consequence, regardless of which version of the argument, is that for a fleeting moment after the click or tick event, the music seems suppressed or subdued. Whether or not this argument has any credibility, playback seemed to recover its composure more quickly in Divinyl post-treatment listening experience.

Little Feat's Sailing Shoes has been such a heavily used reference disc because it is a well recorded (multitrack analogue) album featuring a range of voices and instruments. As a consequence, over the years it has become worn and surface noise has built up. This disc has been carefully handled and has only been played on good quality equipment, from lightweight SME3009-ii/Stanton681EEE and ADC LMF1/ADC XLM in use when it was first purchased, through the Linn Ittok/Karma and Sumiko BPS that followed, to those cartridges reviewed in these pages, supported mostly by the Hadcock GH242SE Silver and SME3012. This LP is a perfect example of an LP in an audiophile's collection that has been heavily used but never abused. Cleaning with Divinyl was something of a revelation. High frequency clarity and coherence take a giant leap forward, subtle details become audible again, soundstage depth increases.

Most noticeable is that surface noise changes are not noticed, because th improvements in information retrieval draw the listener's attention away from distractions like noise. A second listen, deliberately focusing on surface noise, reveals that background hiss is much lower (like using a better brand of analogue tape) and some of the few ticks & crackles have disappeared. The experience is not unlike buying a new, better pressing, of an old favourite.

Digging out some much abused, played in sound system DJ booths on dubiously abused decks, 45rpm singles, will present an unlikely challenge. Having more than one copy of Paul Humphrey's Cochise allows the less damaged copy to act as a reference between plays. The drying time demands a day between pre-treatment play and post-treatment play, so this second copy allows the judging system to be used in an A-B test. The disc under treatment was not suddenly better than the less damaged disc. Groove information, removed like lathe swarfe by ceramic cartridges, cannot be regenerated by any record cleaner. It is said that matter/energy cannot be created nor destroyed, but the physicist who said that had never seen an old BSR autochanger stripped and adapted for DJ use by schoolboys. The Divinyl treatment did make it possible for the modern stylus to reach the groove walls, previously rendered with an Artex like coating comrising spilled drinks, smoke and dust. The surface of the groove was quieter and more informative, the pecussive rhythm now having much more snap. Cleaning the better copy took this further and this finding was confirmed by several other grotty old 45s.

Divinyl seems to do what it claims. It is inexpensive in audiophile or record collector terms and performs a different function from most dry or wet cleaners. It presents the logistical problem of needing plenty of horizontal space for drying batches of treated records. The increased resolution recovered from a record collection comes as a surprise, because the contamination builds up gradually over time, which we do not notice.

During the period of the test no drawbacks were found and no disc was worse after treatment. Divinyl is a worthwhile addition to the shelves of any LP collector or vinyl-audiophile.