Of all of the audio products I have reviewed or owned, the previously reviewed Quad ESL 988 electrostatic speakers have been the most stunning I have ever experienced. My listening experience was elevated to a new plateau, and I could never go back from whence I came. But anyone who has dabbled in this hobby for any amount of time quickly learns that there is no component with perfect performace, the game is one of choosing and balancing shortcomings. The Quads too have their limitations, the most significant of which are the lack of frequency response in the lowest (20-40Hz) and highest(10kHz-20kHz) octaves of human hearing. For extending into the lowest octave, I use a subwoofer that has been my longtime favourite, the ACI Force - problem solved. But regarding the treble range, I know from my own in room measurements and other sources, that these speakers start to drop off somewhere between 10 kHz and 12 kHz, and by 15 kHz there is not much usable output.

But is this missing top octave a significant enough concern, that we need to spend effort and resource on a solution? As you can see in this chart, there is not a lot of sound that musical instruments produce in the last octave of human hearing. Only the Pipe Organ has fundamentals that play above 10 kHz, and very few other instruments even have harmonics that reach that high. So is it really worth pursuing a system response that extends to 20 hHz, or beyond? There are plenty of articles that support that it is worthwhile, but as many of you well know, my curiosities are only ever satisfied by me finding out with my own ears. Onward.

Looking into the market place for add-on supertweeters, there is not a whole lot to select from and the price of admission is fairly steep - some costing more than what I paid for the used pair of the Quad ESL 988. Besides the discouraging price factor of these after market tweeters, the other hesitation I also had with trying them was that they tend to not have enough options for setting the slope and sensitivity with enough granularity so that the integration with the main speakers would be a reasonably smooth and flat response. DIY seemed to be the only option left to consider, so I called the folks at Parts Express and had a nice long chat with Mike Van Den Broek [who since left and has been replaced by Chris Perez]. The following article is the resulting experiences I had with the 3 tweeters the folks at Parts Express sent over for me to try as supertweeters. 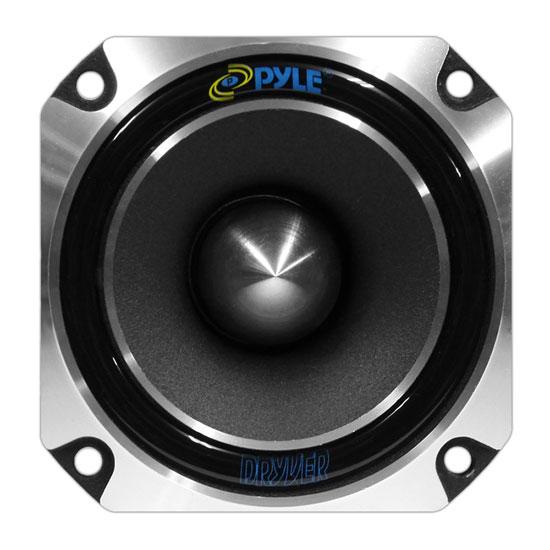 The second tweeter choosen was the Dayton Audio AMTPRO-4 Air Motion Transformer Tweeter. A much pricier affair at $148.70 USD, though still a small fraction of what finished supertweeters go for. The main specs are:
• Impedance: 4 ohms
• Power Handling: 50W RMS
• Frequency Response: 800 to 18,000 Hz
• Sensitivity: 94 dB 1W/1m.
A key feature of this driver is that there are 2 felt pads tucked in the rear to absorb the backwave. These pads are removable, and then the driver operates in a dipole fashion - a perfect complement to the Quad electrostats. 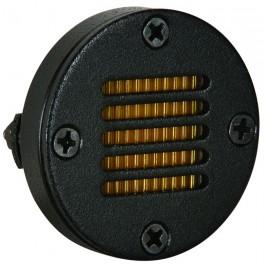 And the third candidate was a much lower priced version of the AMT tweeter above, the Dayton Audio AMT Mini-8 tweeter that they sell for $29.40 USD each. The mains specs are:
• Impedance: 8ohms
• Power Handling: 15W RMS
• Frequency Response: 35 to 40,000 Hz
• Sensitivity: 88 dB 1W/1m.
Not only is this unit much cheaper, but is also a close match for sensitivity and may be able to be used without an L-pad or resistor in the signal path. However, the key limitation of this tweeter in this setup is that it cannot be used in a dipole manner.

In my setup of the Quad 988 in my room, there is an inherent bump in the frequencies between 6kHz and 10kHz. With the 1.5mF capacitor in-line, the crosssover must still have been too low since the frequencies between 6kHz and 10kHz were further amplified - resulting in too much sizzle and detail in that range. While recordings were initally exciting to listen to, because of all the new found detail - it became a bit fatiguing after a while. With a 1.0mF capacitor, the inherent bump did not seem to be further exaggerated and yet I had extension into the last octave, so that seems to be approximately the best capacitor value. For attenuation level, I found level 8 on the L-pad to be ideal, unfortunately I do not know what that would correspond to in a resistor value. Comparitively, the Quad by itself, began to rolloff abruptly beyond 10kHz and by 16kHz I could not even register a signal on my RadioShack or TrueAudio RTAs. So now that the supertweeter was dialed in as best possible, I could begin to examine what if any real improvements could be heard.

The following tests represent the summary of the results I heard over many other tracks during my time with the candidates under review.

"Drum solo " (Tonian Labs demo)
This track is the best recording of a drum kit I have ever heard, with plenty of top hat action in the treble frequencies.

First up, I familiarized myself with the stock Quads without any of the supertweeters in place. The cymbals had plenty of detail and seemed to not be missing anything in terms of extension - I couldn't imagine that supertweeters could really add anything. Well, I have been wrong before, and I was wrong again. With the Dayton Audio AMTPRO-4 Air Motion Transformers in place, it was immediately apparent on first listen that there was quite a bit of extension that the Quad's were leaving out. Now it sounded like there actually were real cymbals in the room, the detail and dimensionality was uncanny. Subsequent listens with the AMT's off, now sounded like a reproduction of cymbals (albeit an excellent one) instead of the real thing. The AMTPRO-4 added on did about as much for the upper treble as moving from dynamic drivers in a box to a full range electrostatic did for the mid-range frequencies. I was spoiled and hooked on first listen.

So if that great revelation wasn't enough, I now proceeded to remove the 2 felt pads tucked into the rear of the AMT drivers. In a brilliant design feature, these drivers have 2 felt pads tucked in the rear to absorb the back waves. This gives the user the option of removing the pads so the drivers play in a dipole configuration. And since the Quads are also dipole, it would make sense for an ancillary supertweeter to be dipole as well. But the question is, how much of a difference would it make. We have here a way to compare foward-firing to dipole with the very same driver, and thus excluding all other variables. To my surprise, the resulting sound was even more awesome. Though there was no apparent increase of frequency extension, but the improvement was in dimensionality and naturalness of instruments. As of that moment, the realism factor drastically increased and it seemed as if instruments were being played live in front of me - instead of mere recordings being played back. If you recall experiencing that magic in the midrange frequencies when you first a full-range crossoverless electrostatic speaker, you can expect to hear the same type of improvement in the treble frequencies with this setup. This entire experience was very befuddling, I had always been so impressed by the treble performance of the Quads and thought nothing could ever better that, till I heard the AMTPRO-4. And then I was convinced there could be nothing better in the universe, till I tried them without the rear felt pads. Now I am wondering if I have any discerning sensibilities at all.

Comparing the Pyle PDBT28 to the Dayton AMTPRO-4, was a marked step down. The difference was not that the Daytons rendered more extension, but rather there was better seperation between notes and the presentation seemed smoother and more natural. No doubt the Pyle tweeters also provided a lot more extension than the stock Quads, but the refinement and detail was a far cry from the AMTPRO-4. With the rear felt pads on the AMTPRO-4 removed, there was absolutely no contest. In a pinch or an extreme budget constraint, or just to try out the concept I'd have no problem recommending the Pyle drivers. But if you can afford the extra expense, the Daytons are absolutely worth the money.

Finally, I compared the AMTPRO-4 to the Dayton Audio AMT Mini-8 tweeter. These had all the extension and refinement of the AMTPRO-4, but the only thing lacking here was that the Mini-8 could not be run in a dipole fashion. And I would never have imagined the Mini-8 was lacking in any way, unless I had not just listened to the dipole configuration of the AMTPRO-4.

"'Round Midnight" (Walter Davis jr.; In walked Thelonious; Mapleshade; 56312)
It didn't take but a single test to relegate the Pyle drivers to the bottom of the pile ... pun intended. They went back into the box and my conclusion there remains, for the price they are phenomenal but if you are playing around with electrostats then it is not unreasonable to expect that you'd easily pay a few hundred dollars for a substantially more refined sound. So this test was only done with the two AMT style tweeters.

This time I decided to run the comparisons between the stock Quads and the AMTPRO-4 in the reverse order. With the felt pads removed on the AMTPRO-4 (L-pad on 8) the detail and realism was uncanny. Putting the pads back on, made a barely noticeable but definite difference towards a darkening and perhaps warmer sound. Taking the pads back off again, highlighted the difference more distinctly. The veils were proverbially and literally lifted, albeit very sheer veils as the magnitude of change was fairly small, but definite. Specifically, there was more "air" to individual notes and resonances, the soundstage got deeper and there was more detail in the treble even at very low volumes.

Disconnecting the AMTPRO-4s completely and running the Quads without any top octave assistance made the sound maybe a bit darker but defintely warmer, than with the pads on. You could tell there was something missing off the extreme top end, but it was very easy and plesant to listen to. Connecting the AMTs back (with pads on, L-pad on 6), it was immediately apparent that a great wealth of detail was brough back and I wondered how I had ever lived without it. The increase in top end detail and stage depth was undeniable.

Again, in comparison to the Mini-8s the AMTPRO-4s rendered a considerable increase in dimensionality and realism. For my money, I find the AMTPRO-4 to be well worth spending the extra $240.

Still my skeptical nature persisted against my own findings. What if I had just imagined or had somehow misperceived all of the differences I have described above? So I disconnected the AMTPRO-4s for a few repetitions of the track and then compared directly to the AMTPRO-4s (L-pad at 6) without the felt pads. SOLD! No questions were left in my mind and all my skepticism was now vanquished...I have to get myself a pair of these.

I cannot give a high enough recommendation to this tweak. If you own a pair of full range electrostats, then you must well be aware of the afflictions that we share, in the form of an interminable pursuit of the simplest and purest path to sonic nirvana. And this fairly simple and inexpensive tweak to the top octave is undeniably outstanding.