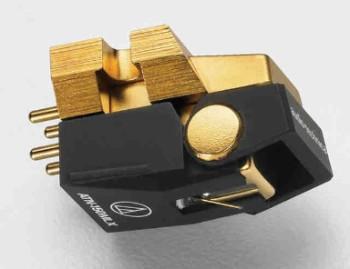 Continuing with my comparison of phono cartridges that retail for less than $500 USD (in the US market), this article follows the survey I began in this comparison of 4 cartridges. Here I examine the AT 150MLX offering from Audio Technica.

It would be rare to find a hobbyist today who is not familiar with the Audio Technica name. They were founded as a cartridge manufacturer 50 years ago in Japan. They have since also made a name for themselves in microphones and headphones, but they remain a household and recognized name in the world of phono cartridges. My previous review of their OC9 ML II MC cartridge revealed a cartridge of high value, even if not sonically at par with the 2.5 times pricier Goldring Elite it was compared to. This cartridge is reviewed as part of the series since it is commonly sold for less than $500 USD. Audio Technica has a marketing practice of stating a very inflated MSRP, but the cartridges actually sell for a lot less in the marketplace, and actually never close to the MSRP that I can find. As of this writing, the OC9 ML II had an MSRP of $730 USD but is commonly sold for about $350 USD. And the 150MLX has an MSRP of $680 USD but commonly sells for less than $400 USD. Frankly, this practice is quite aggravating, I wish they'd stop this nonsense. If anyone finds this practice at all useful, please let me know why so I can be informed of some potential positive reason they would do this. Rant over.

Looking at the manufacturer's description, there seem to be a few interesting features. Per their claims, this cartridge is fitted with what they call a MicroLine stylus, which is said to be similar to the cutter stylus and theoretically will better read the information in the record grooves especially in the treble region. The Boron cantilever is gold-plated, in an attempt to damp any resonance - this would roughly be a metal version of constrained layer damping. And finally, a metal shielding plate between the left and right magnet structures is used to enable a high level of channel separation. But I always take these claims with more than a grain of salt, and ultimately rely on my ears to determine the net performance of a component, on to the proof of the listening tests.

A burn in of 50 hours was done before I did any critical listening. The same was done for the 4 cartridges in the previous article, and I think I will pretty much use it as my default standard going forward. In the previous survey, the Music Hall Mojo (MSRP $500 USD) was the overall best performer, and so this was the cartridge I chose to compare the AT 150MLX directly to.

"Brisas de la Caleta" (Sabicas; Flamenco Puro; Gamma; GX 00-01)
This outstanding album features perhaps the most talented Flamenco guitarist I have ever heard. And the recording quality is excellent to boot. This particular track is very complex and has lots of dynamics and plays on the inner most track, thus should provide plenty of challenge to cartridges. I use this track to test for treble, transients, detail and tracking.

The Mojo had clearly better separation and longer decay of notes, and was overall much more engaging. The AT did seem to have slightly better impact and dynamics in the bass region. Overall, I did prefer the presentation of the Mojo on this track.

"Mother and child reunion" (Paul Simon; Greatest Hits; Columbia; JC35032)
A fairly competently recorded album for the rock/pop genre. This track features a chorus and a variety of instruments including an electric bass.

The Mojo had better delineation between notes, and much better transient attacks. The Mojo was also better at presenting each instrument separately, and was again the cartridge I clearly and immediately preferred more.

Again, the Mojo was way better in presenting the full range of the guitar and extracting all the detail embedded in the recording - notes, microtones and resonances. And not only was it better at retrieving all these forms of detail, it also was a master at putting it all together in an immersive experience. Perhaps when we refer to a playback component as being "musical", it is so because the component has the ability to render all components of detail exactingly well, and the residual effect is that the sum of all that detail is a realistic and superlative listening experience.

The Mojo had way better definition of bass notes, and also was much better at delineating between instruments. The differences were not subtle.

I know this was supposed to be a review of the Audio Technica, but it is just plainly evident that the Music Hall Mojo just was clearly better in almost every aspect, and stole the show. Before the comparitive tests, I spent quite a bit of time listening to the AT 150MLX by itself. I had nothing to complain about, and never noticed any errors of omission or commission. I could have been perfectly happy with this being my everyday cartridge. But this is why I feel direct comparisons are the only way to truly test a component, for only through a direct comparison it was revealed that the Mojo was substantially superior.

I could skip his section, since the Mojo trounced the AT in about every aspect and track I tried, the ones mentioned above and others that are not. Even if we consider the price of the AT to be around $400 USD, and the Mojo at $500 USD - I would urge anyone to find the extra $100 in your sofa cushions, wife's purse or kid's piggy bank and go for the Music Hall Mojo.