Radioshack SPL meter
Hi - I read your review about the Radioshack sound level meter. You mention that you can hook up the output to a PC? Can you record the data coming in from the microphone? Any idea of how to input the information on a mac?
Clare - E-mail: clare.rittschof@gmail.com

LC
Dear Clare,
yes, the analog RCA output of the Radioshack SPL meter is meant to be connected to the MIC input of the PC soundcard. After all, the meter is nothing else than a microphone with a mic preamp. Just use a standard RCA/minijack cable to hook the SPL meter up to the computer. Your PC also needs a sound analysis software in order to exploit the informations coming out from the meter. A good one, free, that runs on Mac, Linux and Windows platforms is REW. This is a fairly complete analysis Java application that also includes waterfall plots. Of course, in order to fully exploit its potential you need to know the basics of acoustics.
Also, you might need calibration charts for the Radioshack SPL meter, since it is not 100% linear, for example it does have a not negligible roll-off at the lowest frequencies. These can be found almost everywhere on the Internet, just Googling around.
Hope this helped somehow!
Lucio Cadeddu

Chario vs Thiel
Dear Lucio,
I have a pair loudspeakers Chario Hyper1 mk2 connected to a Denon 70W ClassA Amplifier. Just wonder if I would improve the quality of my Hi-Fi with a pair of Thiel CS1.2. Is there a big difference between them? I read you tested both of them.
Thank you in advance.
Regards,
Brian - E-mail: brianconley851 (at) hotmail.com

LC
Dear Brian,
you're right, I tested them both and I've also been a happy owner of a pair of Thiel CS 1.2 for a long while, as secondary speakers in my B-system. And yes, the CS 1.2's would be a giant step forward with respect to the Chario's. The only problem is that they might be a tough load (like many other Thiel loudspeakers) for many amplifiers. Their impedance runs very close to 4 Ohm so the amp should be able to drive low impedances. I don't know whether your Denon amp is up to this task or not but you can try, even the Chario's you have are not an easy load either.
Hope this helped somehow, keep me updated!
Lucio Cadeddu

Need advice on lining a cabinet
Hi Mark,
Thanks for posting your useful article on speaker stuffing.
I have a Music Man 115 RH bass cabinet. The reflex horn path starts in the middle of the backboard and exits the front. This means there are two slanted surfaces inside the speaker chamber, the bottom and lower back. In the inside pic, the cab is shown thru the driver hole with the horn to the bottom. The board seen through the speaker hole is the false back, the slanted board that creates the start of the horn path between the true back and itself.
I presume I'll staple 2 thicknesses of light 1/2" quilt batting to the sides, top, and the angled lower back.
Should I staple it to the baffle board?
I have seen warnings against this, but it referred to boards that had both speakers and ports in them.
And should I cover the entire back, including the false back and the entrance to the horn section?
The batting is very low density and should not block air.
Thank you,
Kurt - E-mail: kkurosawa (at) gmail.com

MW
Hi Kurt
As a fellow bass nut (Geoff is too), I'm happy to answer your questions.

Firstly, the Music Man 115 RH is a mid 70s MM design, so probably has (we are not worthy) Leo Fender's direct input into the design. This means it will have been designed heuristically and empirically, NOT using a CAD programme and b*gg*r all prototype testing as modern products often are. This also means you mess with his design at your own risk. We will assume for the sake of this answer that it probably has the original JBL OEM 15" (375mm) driver. This might need a replacement of its sagging spider or perished surround treatment. Be careful not to buy cheap replacements as the sound will forever be changed.

Secondly, it is not a true horn in the sense of a back loaded Lowther Acousta, but a typical hybrid of horn and reflex behaviour, common in PA. This does not matter with musical instrument amps and speakers as what we want here is not accuracy but TONE with a capital T. What you do next depends on whether you play 4 or 5 strings. Low E (at concert pitch) is just above 41Hz and most evenly gauged string sets (eg 105-85-65-45) have more tension in the A and D strings than the E and G strings (hence Rotosound's 80 gauge A), which affects the relationship between the open low E and the fundamental resonance of the lopudspeaker system. Music Man pickups (if your bass matches your amp) have fat tone down there, so you can afford to tighten the note envelope up a bit with some speaker stuffing, same with any 5 string. If you're using light strings on an older Mexican made Fender Jazz, then forget it, there's precious little fundamental down there as it is.

While long fibre wool is best for audiophile accuracy, it sucks in this application because it moves when the speaker is moved and fine fibres end up in the motor part of the speaker, chafing between voice coil and pole-piece. Use proprietary polyester loudspeaker batting at least 50mm (2") thick (bass wavelengths are BIG). Staple it well to the flat sloping panel that defines the horn and to every internal parallel surface, leaving it slightly slack in little 75-100mm (3"-4") waves. Do not put any stuffing in the horn part. Put some open weave cloth (like cheesecloth) over the back of your driver to protect it from ingress of crud. Check the corner joints of the cab are still good before reassembly.

What you should hear is better definition of lows (like a more expensive pickup) and cleaner mids (like a new set of strings). If you're playing 5 string or a detuned 4, you will actually hear notes, not just overtones, below low D, but you'd do well to get a good modern 15, 18 or 2x15 to sit under the MM if you want some real weight from a 5 string.

Finally, I do hope you use valve (tube) amplification or a tube pre-amp with bipolar or class D power-amp, because you're wasting the potential of a classic driver if you don't. 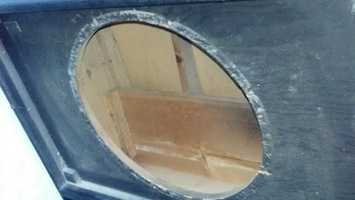 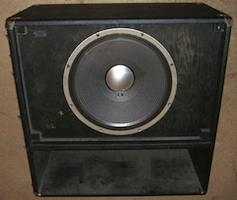 Aktimate Maxi
Dear Andy,
I was looking for information on setting up the Aktimate Maxi and saw your review and so I thought I would email you. I just bought a xonar d2x card for my desktop and so now I want to get some nice active speakers to connect to the card. I have looked and looked and have come across the aktimate mini and maxi and was wondering how difficult they are to set up.
All I want to do is connect the speakers to my desktop like my old creative 5.1s but I am worried these might be too hard for me since i know nothing about technology, I usually just look at the plugs and stick them in the holes that fit them and coordinate the colours if they have any. So these might be a step too far.
I wondered if you could offer me any insight into it. Will they come with everything in the box that i need? I really don't need anything else than to connect them to my sound card, I won't do anything with them beyond use them as pc speakers for music and games.
Simon - E-mail: johnwck90 (at) yahoo.co.uk

AN
Hi Simon,
Yes - the Aktimates were simple to connect. They have an ordinary stereo line mini jack input which is the way computer speakers are normally connected. They came with a speaker cable to connect the two speakers together and although it didn't seem to be of great quality it did the job.
I can't recall whether they came packaged with the stereo jack cable but presumably you have one of those already. Might be best to check with your supplier to make sure nothing has changed since I did the review.
Regards,
Andy Norman

Will direct sales replace traditional HiFi stores?
Hi,
you may like to know Devialet have for sometime used a similar approach. If they are not represented in your country, you can purchase direct from their website, ddp (delivered, duties (and VAT/GST/Salestax) paid!) for the same list price, worldwide. They include a trial period. This is a very forward thinking approach, and one that achieved a successful sale to me in New Zealand.
I enjoy TNT - thanks!
Murray - E-mail: murrayporteousnz (at) gmail.com

Re: Do it yourself Audio Tweaks
Hello Lucio,
I have read through most of the Do it Yourself Tweaks on your online site. I find them very interesting. I am wanting to build a Power Outlet but was wondering if it is even worth it. Here's a link one, I couldn't find one on your site. Have you had any experience with a power outlet that improved sound quality?
I'd be very interested in your opinion before I pour $300 on Wattgate Contectors (USA).
Thank you.
www.audiotweaks.com/diy/ac_outletc/page01.htm
Ian - E-mail: enushalu (at) gmail.com

MW
Hi I saw your letter on our pages and wanted to draw your attention to the two pieces I wrote on this topic too:

Also TNT-audio have published many mains cable & filter designs My experience is that the lower voltage of US mains supply demands higher current (and thus thicker lower resistance conductors) and that the regulations are so different from mainland European and British European regulations that improving ground arrangements results in even more dramatic improvements.
BTW I have experimented and do not agree with our editor Lucio, that a separate spur for sources from the spur for amplification is best; read the lst 12 paraghraphs of the above article plus the conclusion to understand why the components of your audio system should be connected to the same distribution point. Naim Audio also find this and use their "hydra" multiple IEC connector at audio shows to achieve the same arrangement in hotel rooms. Lucio lives in Sardinia and I live in the UK, which explains the different experiences and also why you should try both for yourself.
Do employ a qualified electrician whenever you plan to make alterations to your wiring.
Happy listening,
Mark, The Old Scribe