Kingrex UD 384
Dear Andy,
I hope this email finds you well, I've read your opinion about the Kingrex USB dac, and I have a simple question. I ask you because you are the only one who actually tried it out. Can the Kingrex be a good enough to connect my ipad or PC, because if I just use my ipad connected to the preamp the result is a disaster. I'm currently listening to music with a Nottingham turntable and an ElectroCompaniet EMC1up CD player (hence I have high expectations). I have an AN m1 preamp and Conqueror power amp, connected to AN speakers.
Thanks a lot for your time !!!
All the best,
Cheers,
Giulio - E-mail: giuliogiaiotti (at) icloud.com

AN
Hi Giulio,
I liked the King Rex DAC (UD384) and think it would certainly improve on a direct audio output from a Mac (but do check you are using uncompressed audio - MP3s are likely to sound poor whatever you put them through).
Virtually any good DAC will improve on a computer's audio output, and there are many that will fit well into most systems. There is, to my ears, relatively little quality difference between DACs at different price points compared to the difference between cheaper and more expensive amps or speakers.
Much of the choice comes down to the facilities and the fit and finish. Some offer marginally different image presentations (forward vs recessed) or tonal balance (bass presentation tends to be more accurate on more expensive units). 192kHz capability is also a consideration - some units won't handle that high sampling rate. Personally, the first criteria I would apply is whether I can find a dealer who can demonstrate the equipment or, if mail order, will take a DAC back if you don't like it. You mention that you have an M1 pre. If that's a Musical Fidelity you might also look at their DACs which are highly regarded.
Good luck with your search.
Andy Norman

PGA2311 Preamplifier
Andy,
I appreciate your review of the PGA2311 preamplifier on the TNT site. I'm hoping it will help me solve a basic but apparently not so simple audio problem.
My requirement is for an infrared controlled preamplifier or amplifier that can be connected to the output of a satellite or HDTV receiver when the video is fed to a computer flat screen. Either receiver relies upon a television set to respond to infrared volume control commands from its hand held remote control. When using a computer flat screen and outboard amplifier such as PC speakers, there isn't any inherent method to control volume remotely. The PGA2311 looks like it will do the job adequately with its supplied remote but I'm wondering if the infrared receiver emulates a television receiver so it can be controlled by a satellite receiver remote control.
Have you tried to control the PGA2311 with an infrared remote other than the one supplied with the device? If so, what was the result?
Thank you for your time and consideration of my inquiry.
Regards,
George - E-mail: gmbean (at) puwaba.com

AN
Hi George. Thanks for the question. The simple answer is, no – I only used the remote control that was supplied with the unit. I guess you will need to find a vendor and ask them if they have codes for a universal remote control. It may also be possible to use a learning remote and pick the codes up from the supplied remote. The remote appears to be standard issue credit card type so I wouldn't have thought it was doing anything unusual. If the worst comes to the worst you'd have to use the original remote which is OK. Do remember that you'll need an amplifier too unless you plan to use the one in the TV (although, if that is the case then the TV remote would control the volume).
Good luck and sorry I couldn't help further.
Best regards,
Andy Norman

The passing of Bongo
In 1977 I used to work for a company called Sensor Technologies in Chatsworth, Ca. They were next door to this company called Great American Sound. I had an industrial accident there and was out of work for a few months. When I came back into the work force I decided I was gonna go check this GAS place out and was hired on the spot for QA due to my previous experience with Marantz, Pioneer and JBL. James Bongiorno had left about a year before to start Sumo.
I heard many great Bongo stories while I was there so when GAS went out of business I went to interview with him. I have to tell you. I've been in Audiophile and Pro audio for nearly 40 years but that one day scared me to the bone. I was used to the usual suspects at GAS but this guy was next level. I am very sorry to hear of his passing. His designs changed the entire course of my life and for that I will be eternally grateful. Thank you for covering such a unique individual.
My life would not have been the same without him (I'd probably be less of a snob).
Joe - E-mail: Dealeyplaza63@aol.com

LC
Hi Joe,
many thanks for sharing these memories with us. James was so special, we all miss him.
Regards,
Lucio Cadeddu

Call of the valley
Hi Nick,
I read your article about Call of the Valley, this is one of my favourite too. If I may suggest you two other CDs, same artists, same kind of music. http://www.amazon.co.uk/Sampradaya-Pandit-Shiv-Kumar and http://www.amazon.co.uk/Rasdhara-Shivkumar-Sharma-H-Chaurasia.
Best regards,
Damir - E-mail: dh270260 (at) gmail.com

NW
Hi Damir,
I'm happy that you enjoyed the review, and know of this amazing album. I have noted your other recommendations, and will try and find those albums to listen to.
Regards,
Nick Whetstone

Black voices?
Only one African american musician listed and not the best vocalist; just stick with your white music, you do a very good job there.
Thomas - E-mail: smith1965 (at) hotmail.com

LC
Dear Thomas,
it is always hard for me to understand why so many people are so obsessed with the color of skin. I/we just listen to music and simply don't care about race, sex, political or religious inclination of the artists. If music is good then be it!!!...and that's enough! Haven't we reviewed many black artists? Frankly, I don't know. The only thing I know is that this obsession with race lead nowhere most of the times and sometimes generated disasters and wars. Isn't music supposed to be fun and...a universal language?
Best regards,
Lucio Cadeddu

Finally completed!
Lucio,
to complete the circle i bought a used Naim CD5 XS CD player.
Now from the power cord to the speaker cable is all Naim with Epos M12i on open stands.
Here is a long shot pic if my setup...
Many thanks for all the email exchanges we had and hopefully we can in the future too.
Now my setup is really singing without inhibitions or sharpness I think.
Regards,
Mahesh - E-mail: mpwaran (at) yahoo.com 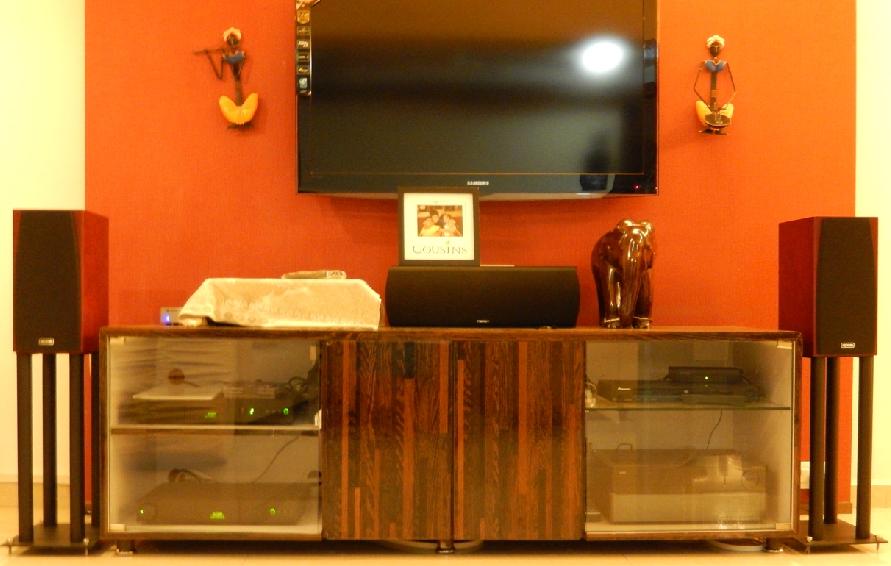 LC
Dear Makesh,
glad to hear you're completely satisfied with your new full-Naim setup! If you can, move everything away from the speakers (TV, HiFi system etc.) and leave the space between them completely empty. Also, place a thick carpet between the speakers and the listening seat. Good sound is strongly related to correct speakers installation! Good HiFi components can't help if the speakers aren't properly installed. I'm pretty sure your Epos's can sound much better.
Hope that helps!
Lucio Cadeddu

Loudness war - looking back into the history of audio engineering
Dear Lucio,
I found a document, that might be of interest for you, entitled "Sound technology concerning the job description of a record sales person" dating back to 1964 (please excuse my humble translation skills). The author complains about too high sound levels in the record production process:

"If all producers (of records) had only technically oriented arguments taken into account, there would have been no difficulties (in the production process) and differences (in the quality of records). Unfortunately the volume is, every so often, used as a sales angle and because of that many a records could sound cleaner if they hadn't been transferred with such high sound levels.

Here technical arguments are used in a competitive battle, that do have no place in there. It would be the same as if, in a country with independent television networks (remember: this was written in 1964), one network advertised: "My pictures are brighter for the same amount of money!". Of course this can be technically manipulated, but it will be a trashy speculation in the amateurishness of the customers and a waiver of quality.".
But what can we learn from this more than ever so true statement? The medium that transports music to us has changed, from vinyl to "liquid music". The sales strategy "Louder is better" has stayed the same for more than 50 years...
All right all you Don Quijotes out there ... let's go and fight them!
Kindest regards,
P.S.: I recommend this website where can be found lots of information about sound recording from an engineering point of view. Unfortunately it's written in German...
Wolfgang - E-mail: wmeyer57 (at) freenet.de

LC
Dear Wolfgang,
sound engineers and record companies have always tried to make loud recordings and records. This helped (and still helps, maybe) sales. The problem is that while once it was difficult to make really loud and compressed recordings (because of software and hardware limitations) today is really easy: all you need is a digital music file and a computer! Things are worse than ever: after the 90s record companies have engaged this crazy loudness war that completely ruined the average quality level of modern recordings. Almost every pop or rock record is heavily affected by dynamic compression. Not so in the 60s and the 70s, when finding good recordings was way easier.
Thanks for the feedback!
Lucio Cadeddu