LC
Dear David,
Scheu analog products (carts, turntables, arms and accessories) can easily purchased worldwide now, thanks to a quite large net of official distributors. If your Country isn't listed there, feel free to contact Scheu Analog directly. Scheu Analog products are not impossible to find even at some online HiFi shop. Happy hunting!
Hope this helped somehow,
Lucio Cadeddu

DIY “chain suspended” speakers stands
Hi Lucio,
in my humble opinion the audiophile community is divided in two categories: those who prefer to couple and those who prefers to uncouple. The argument is well represented in the internet but clear solutions are elusive. Restricting the issue to the speakers only, I have always considered myself a "coupler"; at least until I read the favorable comments about the uncoupling way, written by eminent Italian professional speaker designers.
I don't like annoying and often inconclusive tests, but when I started to design and build the rack with suspended shelves (subject of a previous e-mail) I asked myself what would be the effect if I applied the same principle to my speakers (KEF LS50) firmly sitting on heavy stands (Diapason brand).
Building a pair of new stands was out of question (mainly due to time and space reasons); so I wondered if I could modify the present ones. In fact, they have 4 holes (M6 size) at each corner of the top plate, so while ruminating some ideas I went to the hardware store. Finally, for each stand, I bought the following material: From a carpenter I got 2 MDF plates with the same size of the stand top plate. I think I paid around 30 euros for everything. Mounting all the pieces is simple if you are used to Ikea stuff. For each stand I started screwing the 4 hooks to each corner of the MDF plate; then I connected with nuts and bolts the long side of the brackets to each hole of the stand top plate (short side upright) but not too firmly (for the later fine adjustments). Then, using a clipper, I cut 4 lengths of the chain (longer than needed) and I connected one end to the hole on the short side of the brackets with nuts and bolts. The other end of each chain is to hang to a hook of the MDF plate, previously laid on the top of the stand with the hooks on the bottom side.
At this point, playing with both the chains length and the brackets position it is possible to properly pull the MDF plate above the top plate without touching it. Additionally, it is possible to tilt back and forward the MDF plate for a fine tuning of the speaker position. After finding the best chain length I cut and removed the redundant links and I laid the speakers on the MDF plates using an anti-slip material in between.
Trying now to push on any side the speaker it will swing in all directions but without bumping away from the plate. In few seconds the gravity will drive back the speaker to its relaxed position. The pictures and the movie in the link should better explain the description above.
After approving the result, I painted the MDF plates in glossy black for a better visual integration with the speakers and the stands.
Trying to evaluate this tweak is not easy: an A/B test would not be quick enough; and also in the same period I changed my power amplifier. In the end, there are too many variables so I can only say for sure I didn't perceive any deterioration in sound quality. I also guess that potential changes mostly depend on which couple stand/speaker one decides to tweak.
Massimiliano - E-mail: garre1968 (at) gmail.com 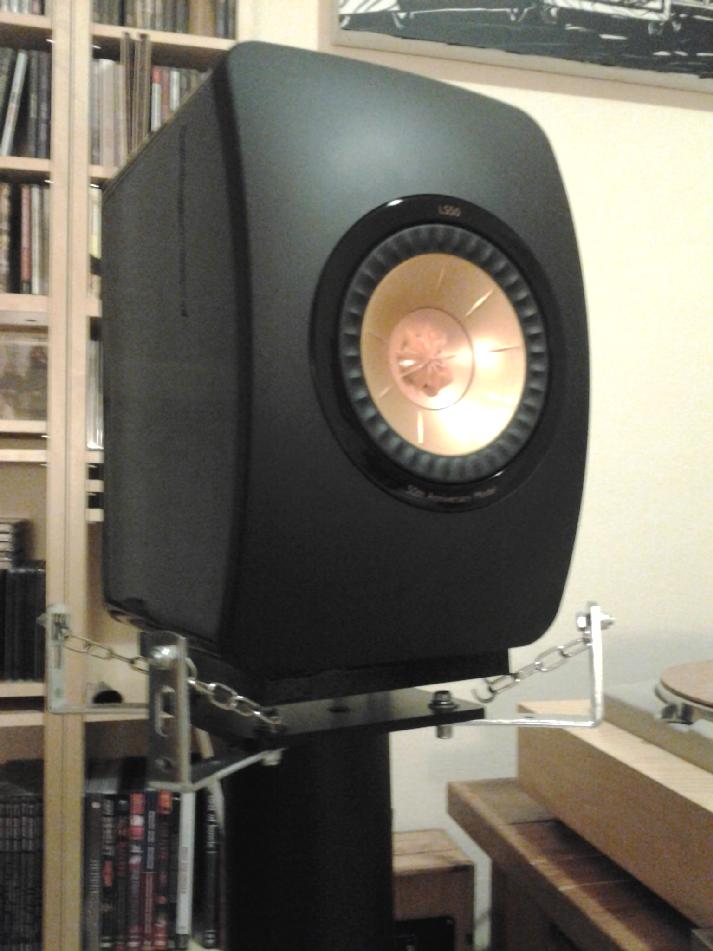 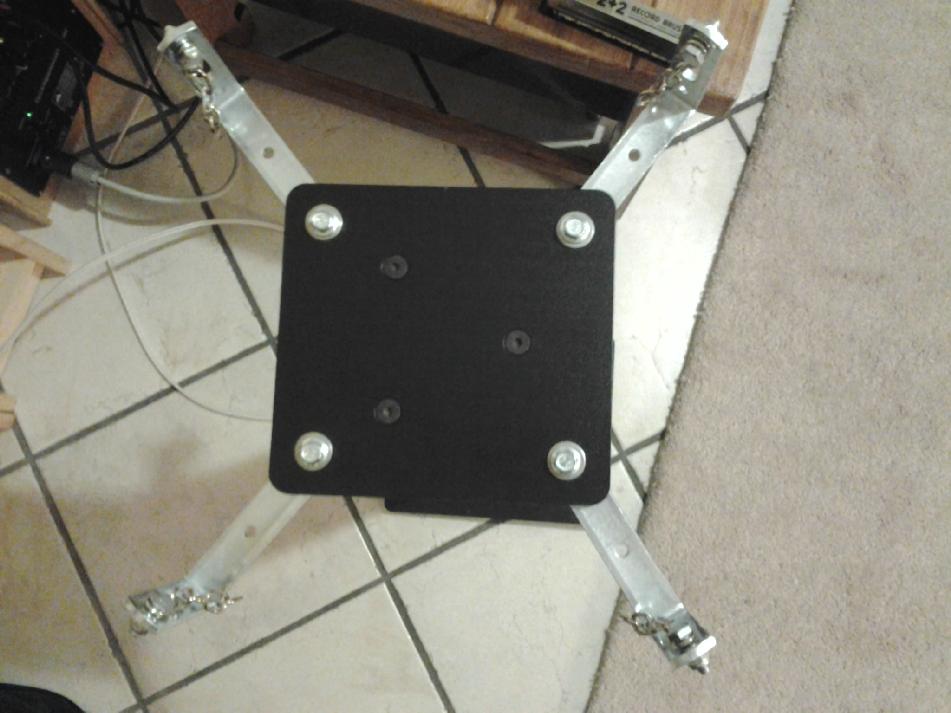 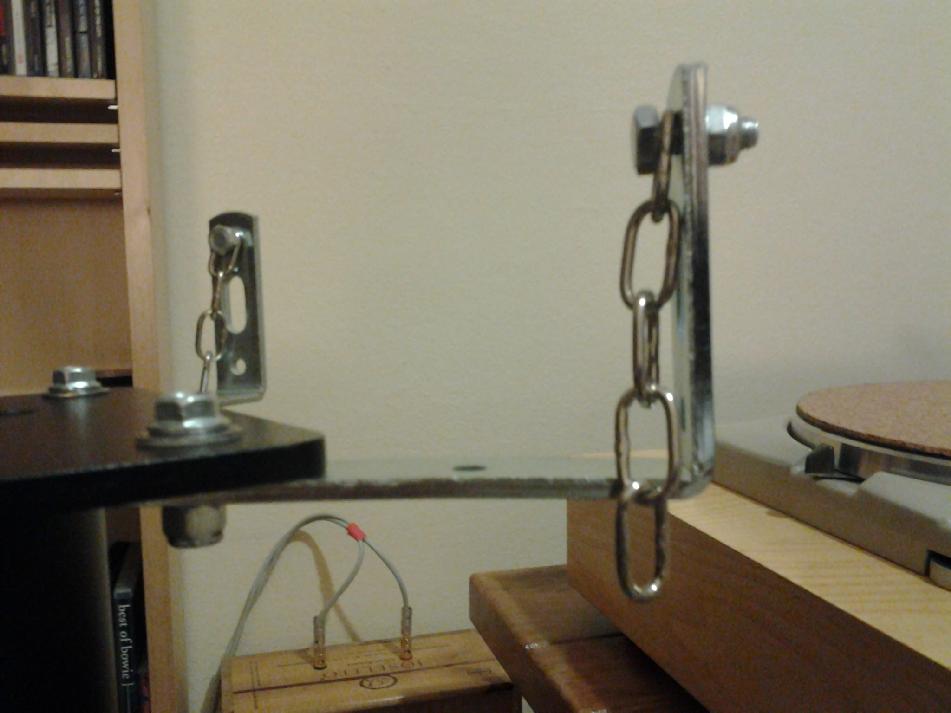 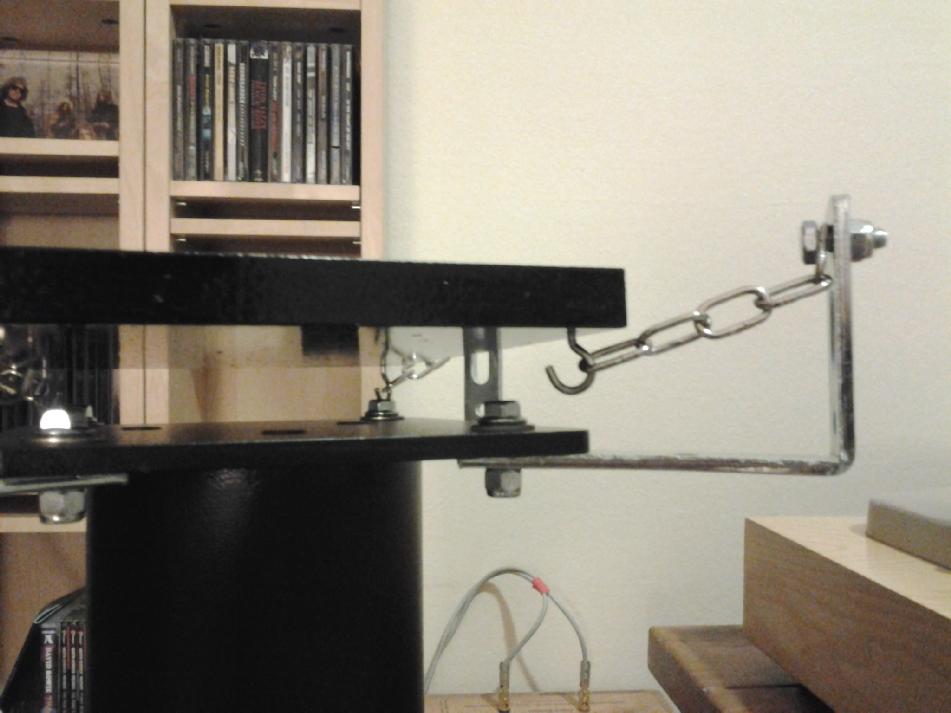 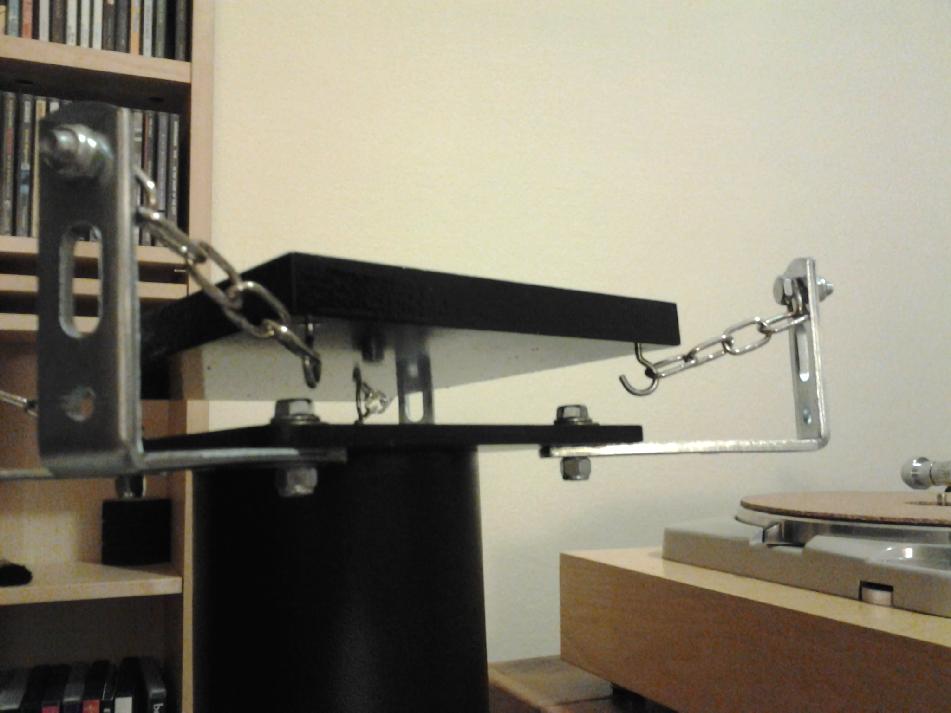 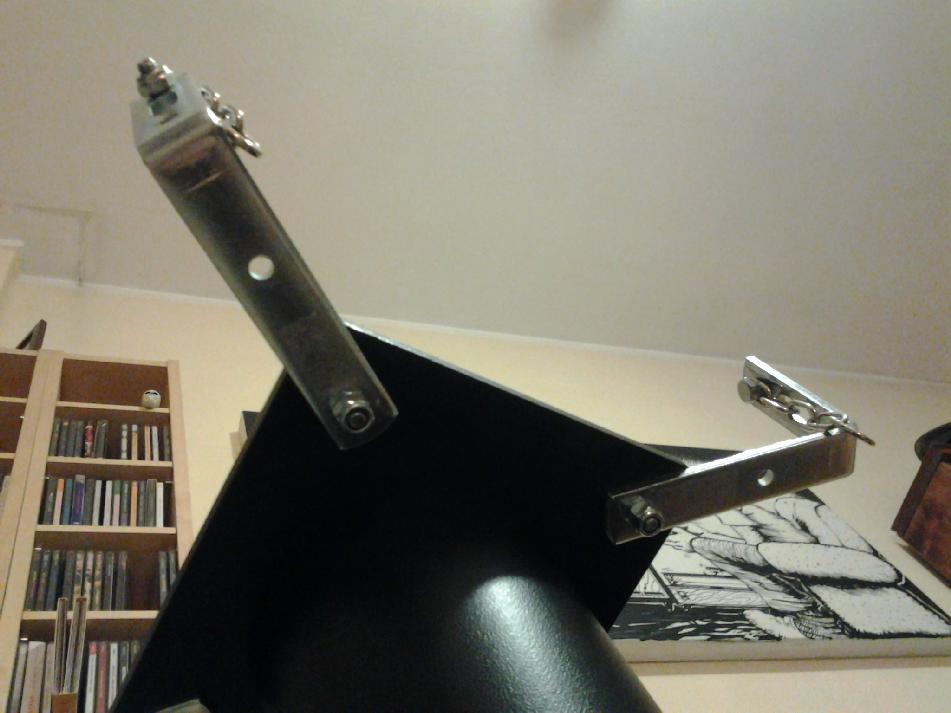 LC
Dear Max,
I'm always amazed by your DIYing skills and ideas! I'm just a bit worried by the apparently excessive pendulum effect that can be seen on the video but, if you haven't noticed side effects on the sound, perhaps your trick works fine. Congrats once again and keep that DIY flame burning bright!
Happy listening!
Lucio Cadeddu

Thor Audio TA-1000 Preamp
Dear Lucio,
You raved about the Thor TA-1000 when it came out in the late 1990s and cost $7000. Do you think I could do much better for $2500 on today's (new or used) market? My experience is that very few can make a good preamp.
I had a Joule Electra LA-100 MkII and found that it made lovely, soothing sounds that bore little resemblance to actual live music. A friend of mine cloned his own design for my main system and it's exquisite, but I need another for my bedroom.
Sincere thanks,
Paul - E-mail: ppearah (at) gmail.com

LC
Dear Paul,
I still believe the TA1000 from Thor Audio is an excellent preamplifier, even by today's standards. For 2500$ is still hard to beat. If you wish to try something different, then try to evaluate one of the latest transformer-based passive preamps, they're incredibly trasparent and neutral. Though being fully passive they don't have the usual shortcomings of standard passive preamps. Music First Audio models are the most famous transformer-based passive preamps (see reviews here on TNT-Audio)
Hope this helped somehow,
Lucio Cadeddu

Just appreciation
Dear Lucio Cadeddu,
I've reed and heard about TNT-Audio several times in the past 8 years. Actually I've reed your review about the Dynavector DV-20x2 Cartridge. Some years back I read a review of the Manger CD and Vinyl record. By the way, I am the sound engineer, who recorded the church bells play at the beginning (long time ago).
What I want to do now, in this mail, is to give you my admiration of your work. I did not know, that you make all of your work without profit. So I think that is a real intensive hobby for you. As it is a hobby for me to design turntables. But this hobby became more and more a job to me. When I started (2008) I just wanted to build one of the best record players in the world. And today I am at the very beginning point to produce audio parts in series.
The fever for designing great audio equipment is not to stop. If you want to know a little more of my work, than you can have a look at my website, if you are in the mood some time.
With kind regards and best wishes,
Rainer - E-mail: Rainer (at) AVDesignHaus.de

LC
Dear Rainer,
first of all thanks for your kind words of appreciation! You're right, we do everything for free and that's a part of the secret for our success. TNT-Audio started operations twenty years ago (!!!)...which is a kind of record in terms of web presence.
As for your hobby/job, we'd be more than happy to review some of your creations when they'll be ready for the market!
All the best,
Lucio Cadeddu

Hello,
I have a difficult request for you. I have a Audion Sterling KT88 power amp you reviewed in 2002. I am looking for a schematic of this amplifier. Can you please send me this schematic?
Thank you in advance.
Erik - E-mail: naramsin77 (at) yahoo.de

LC
Dear Erik,
we don't have the schematics for this amplifier, so we've decided to publish your request here! Hopefully some reader will lend a helpful hand.
All the best,
Lucio Cadeddu

Power output
Thanks Lucio.
I am contemplating a Dayens Ecstacy III or Sonneteer Alabaster integrated amp to replace my Naim Nait 5i. Source will be a Naim CD5XS. Any thoughts?
I think the Melrin TSM will appreciate some more power reserve.
The Supernait 2 is one option as well.
Regards,
Mahesh - E-mail: mpwaran (at) yahoo.com

LC
Dear Makesh,
I'm pretty sure you are not exploiting all the power your Nait 5 Si can deliver! Purchase a sound pressure level meter and measure your average listening levels in terms of dB. Place it close to your ears and start listening to your system at your usual levels. You'd be shocked to discover how many (few!) watts are you really using! (maybe 10-20, not more than that!). Increasing power output when you don't really need it can be a costly and rather useless operation. You can, of course, try to improve quality and not quantity! For ths reason I think a Naim Supernait (or even a XS!) would be a good upgrade.
Hope this helped somehow,
Lucio Cadeddu

Speakers cables
Hi,
I'm looking for a good budget speaker cable for my vintage NAD 3020 and ADS L470'S.
Thank you for your help.
John - E-mail: jtsowers62 (at) gmail.com

LC
Dear John,
I'd suggest you to build something on your own, saving money and getting good results (and satisfaction) at the same time. Our website has many free DIY designs for speakers cables, just have a look at a list here. Otherwise, I think some good used cable from Transparent, MIT, Monster, Supra and VdH can be you best choice.
Hope his helped somehow,
Lucio Cadeddu